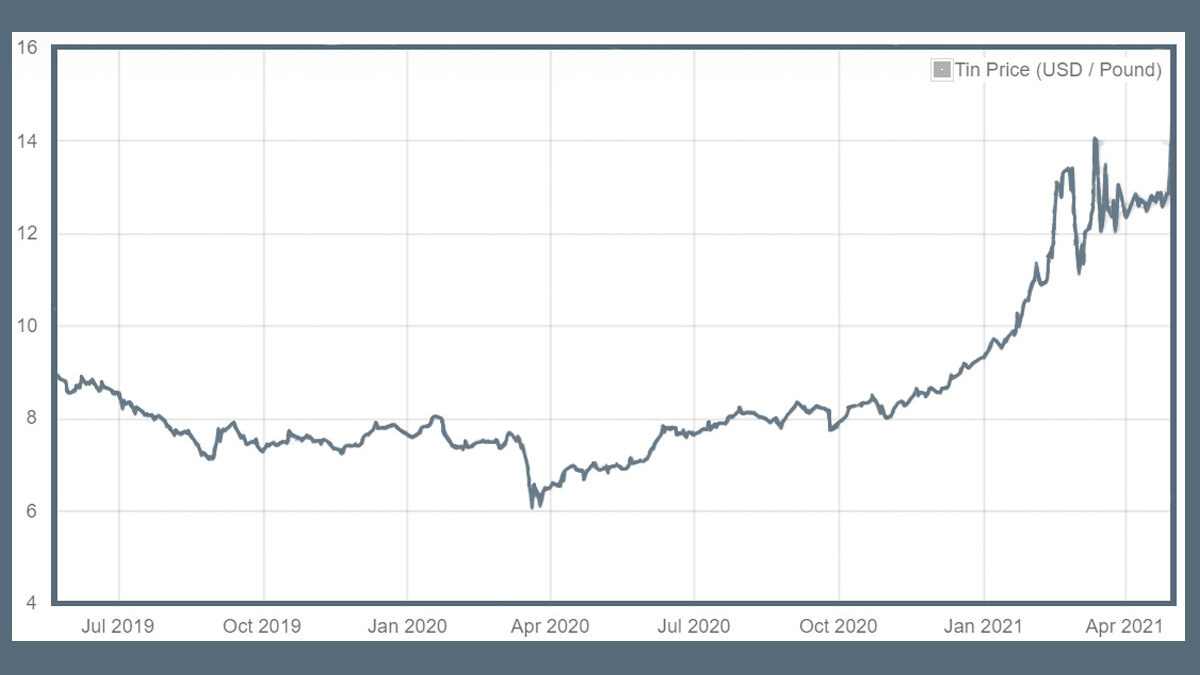 Tin is traditionally used as a solder and for tin plating of other metals, but it has also become a key metal in new applications such as autonomous and electric vehicles, renewable energy, energy storage and advanced computing.

With the world beginning to recover from the Covid-19 pandemic and nations setting their sights on a new “green economy”, demand for tin is expected to remain healthy and trend upwards for years. So too should its price.

Evidently, like other base metals, the price of tin has been rising like never before over the past year on relentless infrastructure spending by governments (i.e. China). Year-to-date, the metal has gone up by more than 42% — now trading above $30,000 a ton for the first time in a decade.

Chances are the value of zinc could stay high for a while. This is because the global tin market is in the midst of a historic squeeze (or one might call a “super squeeze”).

Earlier in the year, the London Metal Exchange (LME) – which has been home of price setting and hedging for the world’s producers and industrial users for 144 years – entered a chronic squeeze on spreads between futures and cash tin prices, during which the market witnessed the biggest cash to three-month premium since at least 1990.

Tightening supply and a rush for physical metal both played a big part in this historic squeeze, which remains “acutely stressed” this week according to Reuters, with cash tin commanding a $1,200/t premium over the three-month contract.

The dearth of physical supply even has Fastmarkets lifting its premium assessments to record levels of up to $2,000/t over LME cash.

It seems as though many parts of the world have run out of the metal essential for circuit-board soldering and critical for clean energy applications.

The domino effect of the tin market squeeze is that China – the world’s largest producer but traditionally a net importer of the refined metal – has to step up as the supplier of last resort.

In the first quarter of 2021, China exported a cumulative 2,151 tonnes of the metal, already as much as half of last year’s count, Reuters reports.

The high-price environment may have provided an incentive for producers to export, but this hasn’t been the case for Indonesia, the world’s largest exporter of tin. For the first three months, shipments from Indonesia declined 24%, extending a downtrend that has been running since 2018.

Over the course of 2020, the Southeast Asian nation has struggled to produce enough of the base metal to satisfy global appetites. Output from Indonesian state producer PT Timah plunged 40% to 45,700 tonnes last year, according to Fastmarkets.

Meanwhile, production elsewhere among the market’s largest ten producers remained largely flat in 2020, according to statistics from the International Tin Association (ITA), which certainly won’t be able to keep pace with years and even decades of demand growth.

This year alone, as the global economy continues to recover, demand for tin is projected to rise 6% to 361,500 tonnes, the ITA says.

With supply disruptions and soaring demand on full display in London, sooner or later, the world’s scramble for tin could open the door for places that are historically rich in base metals to become an integral part of the metal’s supply chain.

One potential source of tin that we should be looking at lies in the Pasco region of central Peru. This is where we find Tinka Resources (TSXV:TK, OTCP:TKRFF) and its flagship Ayawilca project.

Located about 200 km northeast of the capital city Lima, the Ayawilca property comprises 170 km2 of contiguous claims, situated along a world-class mining belt known for producing base metals. About 100 km to the north is the giant Antamina copper-zinc mine jointly owned by BHP, Glencore, Teck Resources and Mitsubishi.

Ayawilca is a carbonate replacement deposit (CRD), an important style of polymetallic mineralization containing economic amounts of zinc, silver, lead and copper. Notable deposits in the region include the Cerro de Pasco and Morococha mines (see map below).

Mineralization at Ayawilca occurs as massive sulphide lenses hosted in limestones of the Pucara Group, the same host rock as at Cerro de Pasco.

Since acquiring these mining claims some 15 years ago, Tinka has drilled over 75,000 metres on the property, and identified three separate mineralized zones that warrant continued exploration and development to this day.

One of those is the Ayawilca Zinc Zone discovered by Tinka in 2013, now the largest resource on the property.

This area alone would make Ayawilca the largest zinc development project in Latin America and one of the biggest zinc resources held by a junior explorer.

The nearby Colqui Silver Zone, about 1.5 km north of the zinc zone, adds another 14.3 million ounces of indicated silver and 13.2 million ounces inferred to the project resource, with mineralization starting at surface.

Here’s where it gets interesting. While the company’s exploration focus has been on areas of zinc mineralization, in 2015, the company made a new tin discovery at what is now called the Ayawilca Tin Zone.

Mineral resources at the Ayawilca Tin Zone are estimated at 201 million lb of tin, plus 67 million lb of copper and 8 million oz of silver, all in the inferred category occurring as cassiterite.

The potential value of Tinka’s flagship project got even bigger this month with the announcement of new assays from the 7,600-metre, 21-hole drill program completed during 2020-2021.

Namely, aside from the definition of zinc-silver mineralization at Ayawilca, the exploration team has also discovered a new zone of high-grade tin mineralization at the South Ayawilca target, immediately adjacent to the highest-grade zinc resource.

This was the first time ever that tin mineralization of such high grade has been discovered in the area.

Tin mineralization was intersected in eight drill holes, including seven of the recent holes, in zones that typically contain very minor or no zinc mineralization. According to the company, this mineralization is believed to be hosted by multiple, flat-dipping lenses with each lens up to 12 metres in thickness and with horizontal dimensions of approximately 200 metres, remaining open to the north.

One drill hole of note was A21-187 (12 metres grading 3.1% tin), which occurs 40 metres above zinc mineralization in the same hole (4.1 metres grading 17.7% zinc). Tin occurs as cassiterite (SnO2), the most common ore-forming mineral of tin (see maps and images below).

“The new discovery of tin at South Ayawilca is potentially very important as a complement to the zinc deposit, as it is the first time we have encountered such high grades of tin immediately adjacent to one of the best zones of zinc at the property,” Tinka’s President and CEO Dr. Graham Carman stated in the April 14 news release.

More importantly, this new style of tin mineralization appears to be different from that observed previously in the deeper part of the Tin Zone at Central Ayawilca – the new style contains what appears to be ‘clots’ of coarse-grained cassiterite mineral grains.

The company says it will immediately prioritize mineralogical test work of this “exciting new discovery,” including separation of the cassiterite which has a very high density compared with most other minerals including sulphides.

All results of the 2020-2021 program have now been reported, including significant intersections of zinc-silver and tin, which means Tinka can now focus on advancing the Ayawilca project towards a resource update and an updated preliminary economic assessment (PEA), expected by Q3 2021.

As a vote of confidence in the potential of Tinka’s Ayawilca project, Nexa Resources (TSX: NEXA; NYSE: NEXA), one of the largest zinc producers in the world, acquired a near 8.8% stake in the company last month, purchasing nearly 30 million of Tinka’s common shares at C$0.26 each — representing a 13% premium to the stock’s closing price the day prior to the announcement.

Nexa currently owns Peru’s only operating zinc smelter as well as three underground base metals mines in the country, and according to Wood Mackenzie, the company was among the world’s top five producers of mined zinc last year.

In the March 17 press release announcing the transaction, Tito Martins, Nexa’s CEO, described Ayawilca as “one of the largest zinc projects in development in Peru with excellent development potential as well as resource expansion.”

“The addition of Nexa as a shareholder of Tinka is a strong endorsement of our Ayawilca zinc-silver project and of our team,” Tinka president and CEO Dr. Graham Carman remarked in the same release.

With Nexa’s investment, Tinka has welcomed another strategic mining partner and major shareholder to the company, the other being Peruvian mining powerhouse Buenaventura SA (NYSE:BVN). JPMorgan Asset Management (UK) is another major stakeholder.

It’s not often that we see a junior miner with an approximate C$80 million market capitalization hold such a large zinc-silver resource with room to expand even further.

And with the recent high-grade tin discoveries, Tinka’s Ayawilca project seems to have reached new heights. Could this be a potential source for what is now the most valued major base metal in the world? Time will tell, and the upcoming resource estimates are worth anticipating.

Given the current state of the global tin market, the company’s latest discovery comes at an opportune moment.

Not to mention the demand outlook and multitude of applications for the once-overlooked metal; there’s only one direction in which tin prices are headed.

Investors have certainly been on alert. Shortly after announcing its significant tin assay results, Tinka’s stock shot up over 12% with more than 500,000 shares traded, demonstrating significant interest in the company and its “monster” deposit in the making.

Richard does not own shares of Tinka Resources Ltd. (TSX.V:TK, OTCPK:TKRFF). TK is an advertiser on his site aheadoftheherd.com 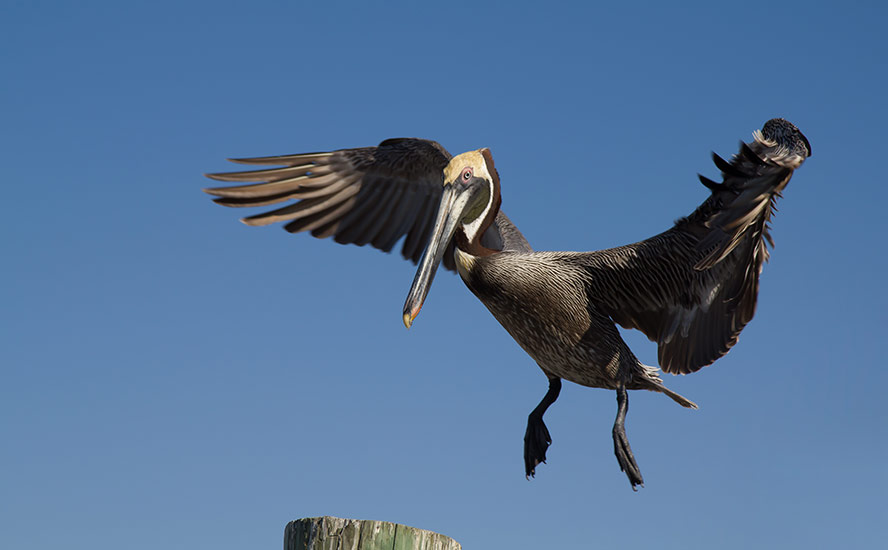