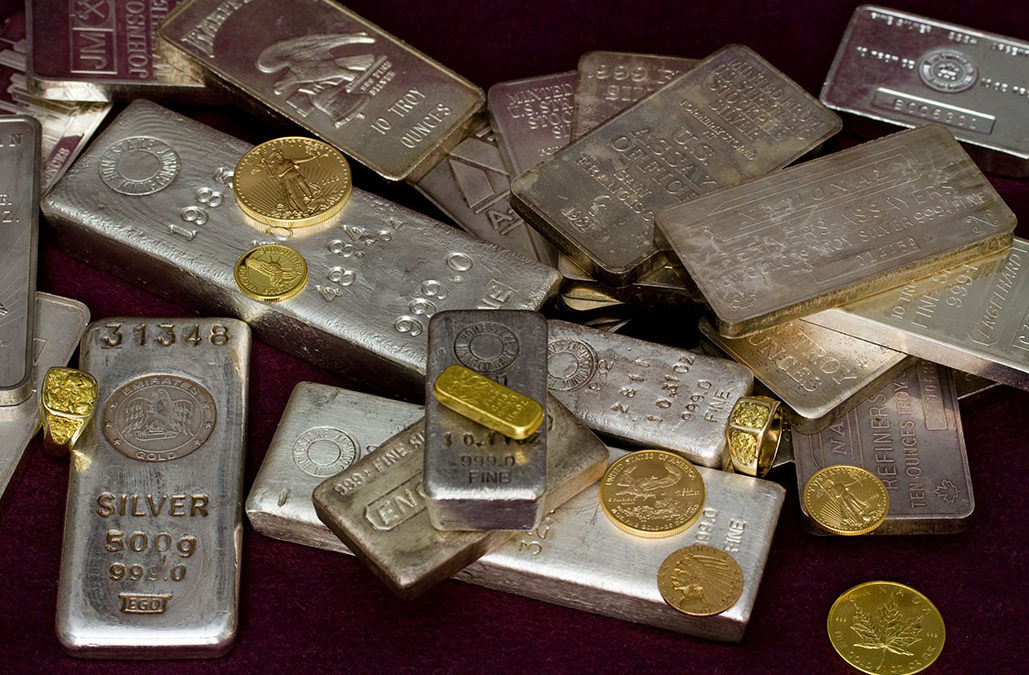 Gold and silver appear to be bouncing back from the drubbing they took in September, with both precious metals striking higher on Monday, Oct. 5.

The white metal saw a significant decline in September, falling from a $29 per ounce peak to a trough below $23. Like gold, silver has been reacting to a firmer US dollar and an uptick in real yields. After falling as low as 0.52% in early August, the benchmark 10-year Treasury note yield rose to 0.78%, as of Monday, Oct. 5, the latest auction date. 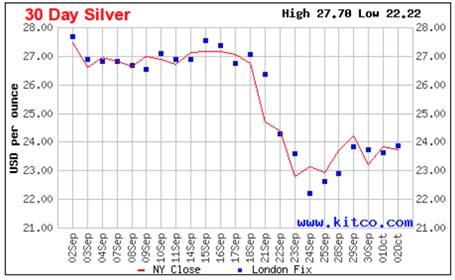 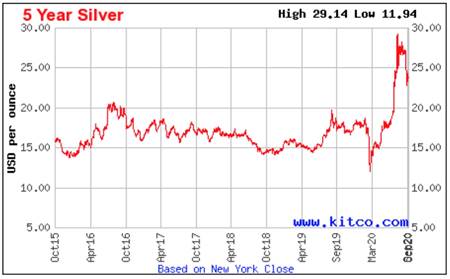 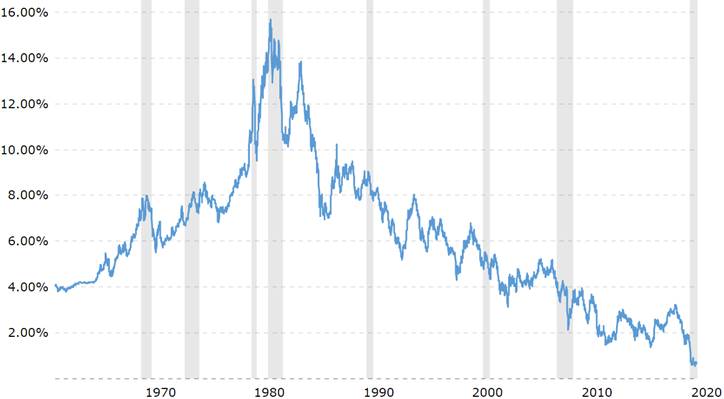 Despite recent headwinds, it looks to be clear sailing going forward for silver, according to  recent forecasts from three financial services firms.

“A higher gold price, along with the ongoing recovery in industrial demand, particularly from China, means that the price of silver is likely to rise in the year ahead,” Capital Economics said in a report published on Sept. 30.

“All in all, a market deficit in conjunction with a higher gold price should lift the price of silver to $25 and $27 per ounce by end-2020 and end-2021, respectively,” assistant commodities economist Samuel Burman wrote. He added,

“Demand for non-interest bearing safe-haven assets, such as gold and silver, should rise as real yields in the U.S. drift a little lower. We forecast that the US ten-year nominal yield will fall to 0.50%, from 0.70% currently, by the end of this year and that it will remain at this level in 2021. The Fed has already stated that it will keep policy ultra-loose until at least 2023 and allow inflation to overshoot its target.”

“The outlook for continued low real interest rates, increasing government debt burdens coupled with geopolitical uncertainty arising from the upcoming U.S. election are all supportive of further significant price appreciation,” the bank’s analysts wrote in a research note to clients.

Silver, it says, “has potential to provide investors with even more torque given the relatively smaller market for silver vs. gold.”

“Our price forecast changes reflect our views that the significant increase in monetary stimulus and Central Banker indications that interest rates are expected to be lower-for-longer have created a macroeconomic back drop that supports increased investment demand for gold, driving prices higher,” the Raymond James analysts wrote in a research note.

We have seen the gold-silver ratio decline from a multi-decade high of 127:1 in March, to the current 78:1, meaning it takes 78 oz of silver to buy 1 oz of gold. This is still high by historical standards, meaning silver remains undervalued compared to gold, and will likely move higher, towards the average historical ratio of 55:1. 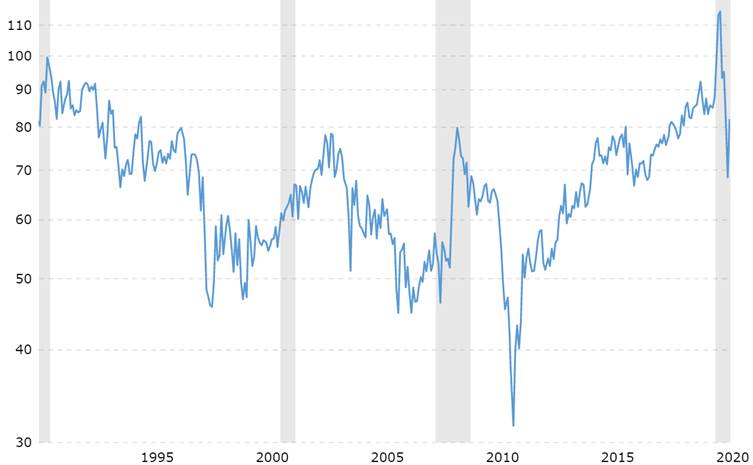 Burman, of Capital Economics, thinks silver prices should gain momentum on the back of ongoing fiscal stimulus in China, and greater industrial activity which drives around half of annual silver consumption. He points out the latter will be helped by governments investing in green energy, including solar panels which contain silver paste.

5G technology is set to become another big new driver of silver demand.

The Silver Institute expects silver demanded by 5G to more than double, from its current ~7.5 million ounces, to around 16Moz by 2025 and as much as 23Moz by 2030, which would represent a 206% increase from current levels.

Although weak consumer confidence because of the pandemic has crimped demand for some of silver’s end uses, including autos and consumer electronics, governments’ recently announced infrastructure investment programs are expected to lift silver industrial demand.

On the supply side, among a second wave of covid-19 shutdowns this summer (the first wave was in March) were some of the biggest producing silver mines in the world, although some production has come back online.

In July, mining companies in Peru were forced to keep operations suspended, and halt new ones, as the number of coronavirus cases soared. Among the companies affected were Trevali and its Santander silver mine, Hochschild Mining’s Inmaculada, and Fortuna Silver Mines’ Caylloma. Investment projects such as Anglo American’s $5 billion Quellaveco, Minsur’s $1.6 billion Mina Justa and Chinalco’s $1.5 billion Toromocho expansion have been delayed by several months.

In Mexico, the world’s largest silver producer, a surge of covid-19 cases in March led to the suspension of non-essential services. Among the companies forced to temporarily halt their operations, were Newmont Mining, Argonaut Gold, Pan American Silver, Sierra Metals, Excellon Resources and Alamos Gold.

The Silver Institute is predicting a 13% decline in silver production from Latin America this year – equivalent to 67 million fewer ounces – with global supply set to fall 7.2%.

Given both supply and demand factors, Capital Economics estimates the silver market will remain in a small deficit, right through to 2022.

In August  Silver Dollar Resources (CSE:SLV, OTC:SIDRF) finalized a letter of intent (LOI) with First Majestic Silver to acquire up to a 100% interest in the La Joya silver-copper-gold project in Mexico.

The project hosts the La Joya mineralized trend as well as the Santo Nino and Coloradito deposits. It consists of 15 mineral concessions totaling 4,646 hectares.

With the option agreement finalized, Silver Dollar has been going through historical exploration data at La Joya, including records of a Phase 3 drilling program conducted by SilverCrest, a previous operator, between February 27 and March 29, 2014. What it has found is breathtaking.

These are very high silver and copper grades; in my opinion the extreme high-grade nature of the vein makes it a mineable width.

According to Silver Dollar’s CEO, Mike Romanik, the 750m-wide gap between the Main Mineralized Trend and the Santo Nino deposit will be a priority at La Joya because “It demonstrates the tremendous potential for resource expansion.”

The Phase 3 drilling program targeted infill drilling along the Main Mineralized Trend (Figure 2) and was successful in confirming significant mineralization in 15 of 17 holes (two holes were drilled for geotechnical logging and no assay records have been located). The results provide Silver Dollar with further confidence in the extent of the mineralized system and verify several key features of the polymetallic Ag-Cu-Au deposit identified in the National Instrument (NI) 43-101 Preliminary Economic Assessment Technical Report (the “PEA”), with Effective Date of October 21, 2013, and Released Date of December 5, 2013 (refer to SEDAR) 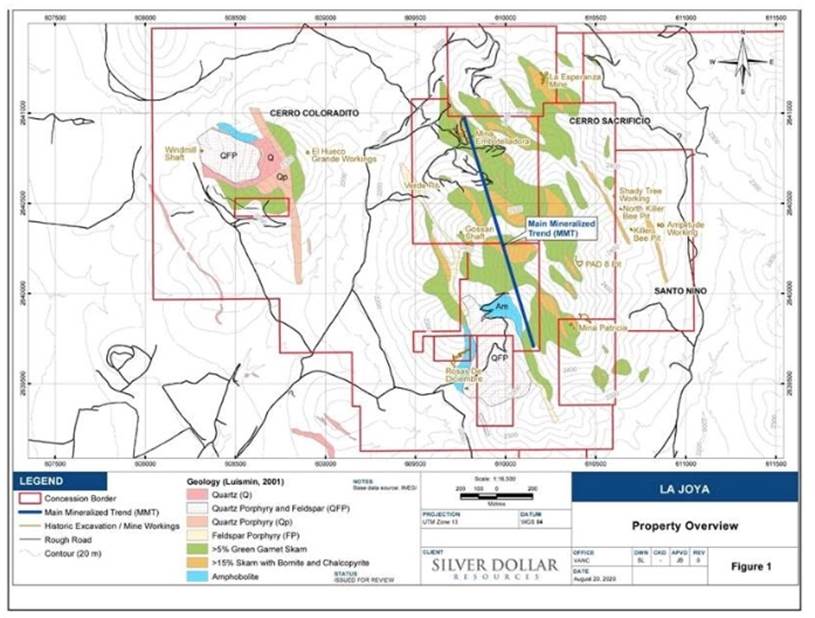 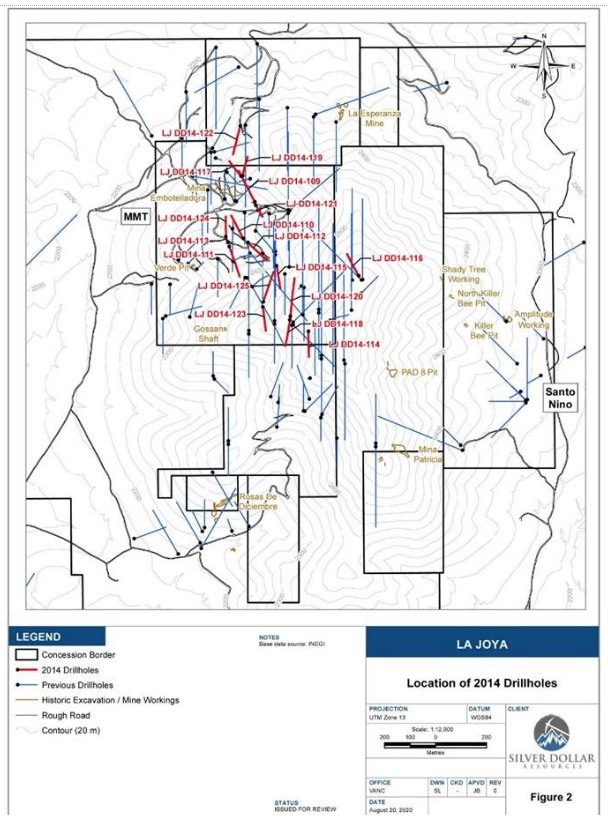 In other recent news, Silver Dollar announced that its shares began trading in the United States on the OTCQB Venture Market (“OTCQB”) under the ticker symbol “SLVDF”. The company’s common shares will continue to trade on the Canadian Securities Exchange (“CSE”) under the symbol “SLV”.

“Qualifying for trading on the OTCQB is the next step in our ongoing effort to increase visibility, expand trading liquidity and broaden our shareholder base,” said Mike Romanik, President of Silver Dollar, in the Sept. 30 news release.

On Sept. 17 SLV announced that $10.5 million was raised through a private placement, whereby 7.5 million shares were offered @ $1.40 per share. Of the total, 4.6 million shares were purchased by Eric Sprott, earning the renowned resource investor a 19.9% stake in the company. First Majestic Silver invested $700,000, meaning the major silver miner now holds about 16.4% of SLV’s shares.

“We would like to thank Eric Sprott, First Majestic, and our existing shareholders for their support and welcome several new investors,” said Romanik. “This funding positions us to pursue our explorations programs at both our Red Lake properties and hit the ground running in Mexico where we have already identified numerous priority drill targets at the La Joya Silver Project.”

Richard does not own shares of Silver Dollar Resources (CSE:SLV). SLV is an advertiser on his site aheadoftheherd.com