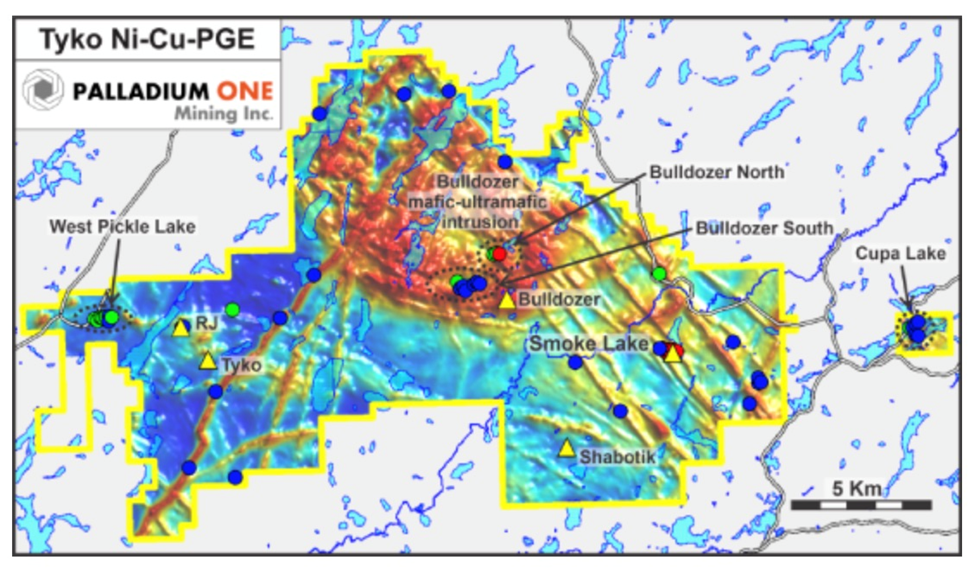 Palladium One Mining  (TSXV:PDM, OTCQB:NKORF, FRA:7N11) continues to outline a high-grade nickel-copper system at its Tyko Ni-Cu-PGE project in Ontario.

Located 25 km north of the Hemlo mining complex, the 250 square km Tyko property hosts a large, Ni-Cu-PGE mineralization system that is similar in style to Vale’s Voisey’s Bay nickel mine in Labrador.

The project boils down to two types of mineralization: nickel-dominated material at Smoke Lake (about two to one nickel to copper, with some PGEs); and the Bulldozer intrusion, which is more copper-rich than Smoke Lake, with elevated cobalt.

The Smoke Lake discovery was awarded the 2020 Bernie Schnieders Discovery of the Year Award by the Northwestern Ontario Prospectors Association (NWOPA), who recognized it as an “outstanding mineral discovery”.

Building off this success, PDM continued exploration at the Smoke Lake zone in 2021 with a Phase 2 drilling program (nine holes totaling ~2,000m), which produced a number of high-grade intersections, all near surface. The most recent results were highlighted by 5.0% nickel equivalent (NiEq) over 1.4m.

This year, the company is targeting an even bigger drill campaign on several targets, with exploration funding secured through a $4.35 million private placement completed in December. The non-brokered financing of 15 million “flow-through shares” was done at CAD$0.29.

Palladium One has just announced three of five exploration permits have been received, and that a 15,000-meter drill program is slated to begin this month.

“Tyko is an award-winning, sulphide, high-grade Critical Minerals (nickel, copper, cobalt) Project in Ontario, Canada. With drill permits in hand we are launching the 2022 diamond drilling program to expand on our high-grade discovery success, where we intersected up to 10% nickel equivalent over 4 meters, within a 430-meter strike length that remains open for expansion,” Palladium One’s President and CEO Derrick Weyrauch stated in the May 11 news release.

The Bulldozer North and South anomalies, meanwhile, represent a new mafic-ultramafic target at the large Bulldozer intrusion, which has never been drilled or even mapped. They are the first electromagnetic anomalies detected within the intrusion, which is host to one historical copper-nickel-cobalt showing, consisting of remobilized disseminated chalcopyrite and pyrite in a shear with historical samples returning up to 3.34% Cu, 0.12% Ni, 0.24% Co, 0.38 g/t Pd and 0.08 g/t Pt. The results suggest that more widespread mineralization is present within the larger intrusion.

Soil sampling conducted by PDM in 2021 on the Bulldozer South anomaly returned up to 891 ppm copper and 142 ppm cobalt. The soil samples have similar metal ratios to the historical Bulldozer showing, suggesting a similar mineralization style. The copper in soil results are particularly noteworthy, having returned up to 45 times background levels.

The Bulldozer North and South anomalies also occur in a strongly magnetic portion of the Bulldozer intrusion, along its southwestern contact, possibly indicating the base of the intrusion. The extent of these highly magnetic rocks extends well beyond the current VTEMmax anomalies and suggests any discovery in this area has the potential for significant tonnage.

Along with advancing exploration at the drill bit, Palladium One has also increased its chances of hitting more high-grade massive sulfides by expanding its land position at Tyko.

Two earn-in agreements grew the nickel-copper project by 950 hectares and an additional 3,500 ha has been purchased from the original optioners of the project.

The junior resource market has been caught up in the maelstrom of poor stock market performance that is mostly due to the Federal Reserve’s interest rate hikes being done to fight inflation, which has reached multi-decade highs.

Among the exploration companies we believe will buck this trend is Palladium One. When markets soften, you want to be invested in companies with strong cash positions that don’t have to go to the market to raise funds, and that will soon be putting out news that has the potential of moving the stock price higher.

PDM, for those not up to speed on it, has two properties, Läntinen Koillismaa (LK) in Finland and Tyko in Ontario. The company has just released an impressive new resource estimate at LK.

Now Palladium One is turning its attention to Tyko, with a planned 15,000m drill program funded with CAD$4.5 million. The financing was done at 29 cents, but PDM is currently trading at two-thirds of that, $0.19, representing a good deal for investors hoping to get in early, before the next news cycle for Palladium One begins.

The cash-rich company is exploring for nickel, copper and cobalt, which, as CEO Weyrauch points out, have all been designated as critical minerals in Canada, the United States and the European Union.

PDM has hit some outstanding nickel grades at Tyko and we expect more of the same when the drills start turning at three of the five exploration permit areas, with two more permits expected soon.

Richard does not own shares of Palladium One Mining (TSXV:PDM). PDM is a paid advertiser on his site aheadoftheherd.com