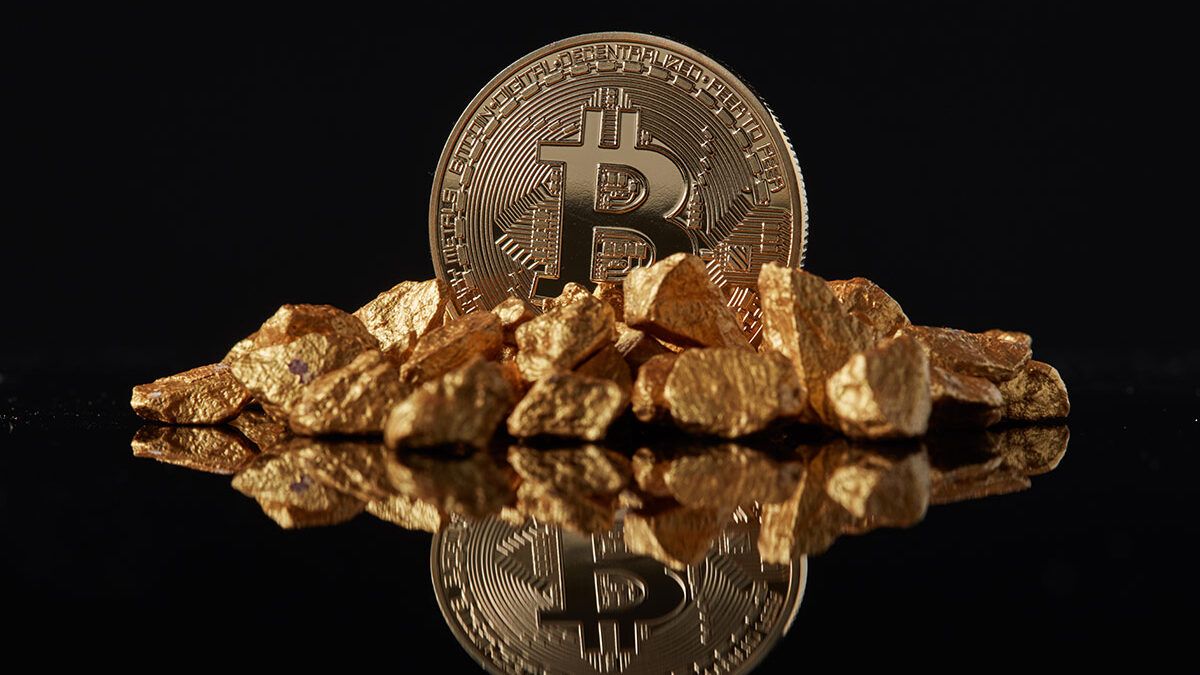 Will Bitcoin be a replacement for gold and fiat currency?

The resurgence of Bitcoin was one of the biggest financial stories of the past calendar year.

Right out of the gate, the world’s leading cryptocurrency saw its price surge by more than 20% within the first two weeks, enjoying its best start to a year since 2012.

Nevertheless, Bitcoin et al. were still considered fringe investments at that time, belittled by the likes of Warren Buffett, who regarded the digital currency as having “no value”.

Then, from March, the price of Bitcoin suffered a significant dip, coinciding with the onset of global pandemic lockdowns and market panic, which resulted in a near two-month period that most refer to as the “coronavirus crash”.

But, like many other assets that benefited from the biggest spate of stimulus measures unleashed around the world (more on that later), Bitcoin’s trajectory reversed, and following a rather dormant summer, it went on a monster rally and never looked back.

By year-end, its value had nearly quadrupled to over $30,000, which at that time was near a record high. (That level has since been shattered, and now Bitcoin is trading at about $36,000.)

While Bitcoin has had memorable runs in recent years (i.e. 2017), the general feeling surrounding the current price rally is very much different, namely its role as an investment asset that trades based on macroeconomic trends as well as the stature of those who are endorsing it.

As policymakers continue to promise more money printing to rescue the economy, many – especially big corporations and money managers – are starting to pile into Bitcoin as a hedge against inflation and currency debasement, much like gold.

This narrative, which has received backing from high-profile billionaires like Stanley Druckenmiller and Paul Tudor Jones, is the primary driving force behind the Bitcoin craze during the latter months of 2020.

The idea that Bitcoin could become the “digital gold” isn’t a novel one.

Ever since a software programmer going by the name Satoshi Nakamoto designed the digital currency some 11 years ago, many have become fascinated by the concept of a decentralized network supporting a peer-to-peer electronic payments system.

And when the commercial transaction involving Bitcoin took place 10 years ago, they saw its potential as a viable medium of exchange, a role that gold has played in human society for thousands of years.

During its early years, the reason why Bitcoin has been compared to gold was rather simple: Like gold, Bitcoin too has a limited supply and cannot simply be created arbitrarily; it requires work to “extract”, albeit via computational means and not physical means.

In 2015, a book titled “Digital Gold: Bitcoin and the Inside Story of the Misfits and Millionaires Trying to Reinvent Money” was published by New York Times reporter Nathaniel Popper, which perhaps served as a precursor for the term “digital gold” to become mainstream.

It isn’t just the casual mainstream investors using the term “digital gold” either.

There is a herd of new, institutional investors that are also on the “digital gold” train, prompted by increased demand from clients and more attractive ways to gain exposure other than direct ownership. These include big traditional finance players like JPMorgan Chase and BlackRock. Wells Fargo even published a 2021 investment outlook with a full page discussing Bitcoin’s prospects.

This is a sharp contrast to 2017, when bank executives including JPMorgan’s Jamie Dimon were largely skeptical of Bitcoin, even calling the technology behind the cryptocurrency as “fraud”.

“We are seeing institutional capital flowing in at the fastest pace in the history of our business, and it is being deployed by some of the world’s largest institutions and some of the most famous investors,” Michael Sonnenshein, managing director at Grayscale Investments, said in an interview with CNBC last month.

Will Bitcoin become a like-for-like replacement for gold? Only time will tell, but the group of people who want to see it succeed is getting larger and larger.

Meanwhile, those who have advocated for Bitcoin including the Winklevoss twins, Cameron and Tyler, continue to champion for the “digital gold”. In a crypto finance conference held in Switzerland a year ago, the two perma-bulls urged attendees to start “building up Bitcoin reserves” in anticipation of significantly higher prices.

Specifically, they targeted gold investors, suggesting that “Bitcoin will disrupt gold” in the future. This ‘prediction’ was made even before economic turmoil brought forth by the Covid pandemic and ensuing trillion-dollar government spending that’s driving inflation fears across the world.

While gold has traditionally been coveted by investors who consider owning the metal as a way of protecting against inflation, there is some evidence that Bitcoin has already taken some of the shine off gold as the go-to risk haven asset.

“Bitcoin appears to be nibbling away at gold’s place as a ballast in some portfolios,” Nikolaos Panigirtzoglou, an analyst at JPMorgan, wrote in a research note.

He cited strong flows recently into the Grayscale Bitcoin Trust, which has almost US$9 billion in assets under management, at a time when gold-backed ETFs were experiencing consecutive months of outflows – a sign that a “nascent shift may be underway.”

Gold itself had a historic year in 2020, with prices having gone up by 25%. Inflows into ETFs tracking the precious metals also crossed the 1,000-tonne mark for the first time ever in a calendar.

The shift in risk sentiment among investors wasn’t the only catalyst driving gold prices up. On the supply side, we’re close to exhausting the world’s gold reserves, which would make gold increasingly valuable unless there is a significant upgrade on the current mining methods and technology.

“Once the likes of Tesla’s Elon Musk or Amazon’s Jeff Bezos start mining gold on asteroids, which will happen within 25 years, gold’s value will change,” Tyler Winklevoss told the audience at the crypto conference.

In this regard, Bitcoin is quite similar to gold. As mentioned, the “digital gold” supply is set at a finite amount of 21 million (around 18.5 million of which have been “mined”). Interestingly, it has also followed a similar price trajectory as gold (both went on a run in 2012 and 2016).

This is not to say Bitcoin could completely replace gold. Perhaps the precious metal’s biggest advantage over Bitcoin is that it can be traded without electricity or Internet. This makes gold especially valuable in situations where power and telecommunications services are unexpectedly unavailable.

The extent of Bitcoin’s reach goes well beyond replacing gold in our investment portfolio; as the term cryptocurrency suggests, Bitcoin was meant to be a form of currency (i.e. the US dollar) that can be used to buy goods and services.

In this regard, its rate of adoption across several markets is expected to ramp up in over the next few years as the new generation of investors, led by millennials, is more likely to view Bitcoin as an alternative to fiat currency.

Indeed, the financial market disruption led by cryptocurrencies has already taken place around us. A growing number of online merchants are beginning to accept Bitcoin as a method of payment; so too are multinational brands like Microsoft and Starbucks.

PayPal, known for supporting online “money” payments, announced in October it would allow its 346 million customers to hold Bitcoin and other cryptocurrencies to shop at the 26 million merchants on its network.

“It’s the sheer scale of PayPal’s reach that is attracting the headlines,” Jason Deane, a foreign-exchange and cryptocurrency analyst at Quantum Economics, wrote in a report in late October. “This could well go down in history as a watershed moment, the point at which bitcoin goes properly mainstream,” Deane said.

And like major currencies, Bitcoin has its own futures contract, first launched on the Chicago Mercantile Exchange in January 2020. Within a few months, the number of futures and options contracts open has more than tripled, now at more than 13,000.

While it remains to be seen where Bitcoin eventually lands on the spectrum of investment assets over time, what’s for certain is that the public perception of the digital currency is changing.

While on the subject of replacing gold and fiat currency, the world’s central banks have held these assets in reserves as their “backup funds”.

Inspired by the success of cryptocurrencies, many central banks are now pondering the idea of implementing their own version of digital currencies. Unlike Bitcoin, which is considered private, a so-called central bank digital currency (CBDC) would be backed by the central bank, making it “risk-free” like banknotes and coins.

The purpose of a CBDC, according to authorities, is to provide us with a basic means of payment (online and possibly even offline) at a time when cash use is dwindling. It would also compete against existing electronic payment solutions such as digital wallets, online banks and, obviously, Bitcoin.

About 80% of central banks in a recent survey indicated that they are looking at implementing CBDCs, and more than half have already started running experimental pilots.

While most such projects are still at an early stage, the buzz surrounding CBDCs has intensified during the past year after Facebook announced plans to create its own virtual token, as the ongoing Covid-19 pandemic boosted the need for digital payments.

Perhaps the most prominent example of such CBDC programs is China’s recent pilot of its version of digital currency, an initiative aimed to internationalize the yuan and reduce the nation’s dependence on the global dollar payment system.

Other countries are making similar efforts too. In Sweden, the world’s least cash-dependent economy, the Riksbank has also begun testing an e-krona. Meanwhile, the European Central Bank and the Bank of England have both begun consultations on this matter in conjunction with monetary policy.

Even the US Federal Reserve, which has long said it doesn’t have plans to launch a digital currency, recently had discussions building and testing a hypothetical design, though Chairman Jerome Powell cautioned that “a great deal of work” still needs to be done before it would decide to launch a digital dollar.

As far as the global financial market is concerned, Bitcoin was probably the biggest winner from the 2020 coronavirus crisis in hindsight.

Possibly for the first time in history, the cryptocurrency has caught the collective attention of banks, money managers, insurance firms and corporations.

As a form of investment, it has already begun to rival gold; as a method of payment, it serves the same function as fiat currency. We’ve already seen a glimpse of how cryptocurrencies like Bitcoin could change the dynamics of our financial markets, but just how much influence they would pose depends on policymakers.

Maybe somewhere down the road, we could see instruments like ETFs backed by Bitcoin and other digital assets, though that would require approvals from the SEC, which is likely to strengthen its oversight of the crypto market Biden administration.

For now, Bitcoin has made a compelling point that it can thrive under the current macroeconomic environment, blending the benefits of both gold, currency and technology.