Why Chile’s plan to expand copper output is a farce

A headline in the mining news this week caught my attention: “Chile copper output to jump by 30 percent in 10 years – report”.

The report from Chile’s state copper agency, Cochilco, says copper output from Chile, the #1 copper-producing nation, will crack the 6-million tonne threshold for the first time this year and keep rising by about 30% over the next decade. It could even hit 7.25 million tonnes by 2025 due to new copper projects and expansions, says Cochilco.

It makes sense that Chile would want to expand copper exports. Like Canada, Chile’s economy is driven by sales of natural resources. It derives around 60% of its revenues from exports, with copper representing nearly a third – 26% of exports in 2017. Chile’s top 10 exports are copper and other ores, fish, fruits, nuts, wood, woodpulp, beverages (including wine), chemicals and meat.

According to the chart below from Trading Economics, comparing the third quarter of 2017 to Q3 2018, Chile’s current account deficit (the value of goods and services imported is greater than exported) nearly tripled, from $1.157 billion to $3.395 billion.

The huge third-quarter gap is the highest since Q3 2013, and is most acutely felt in the goods account, which shifted from a $2.191 billion surplus in the third quarter of 2013 to a $6 million deficit in Q3 2018, “mainly due to higher imports of autos and oil prices while lower copper prices weighed down on exports,” states Trading Economics.

It’s no wonder, then, that Chile wants to crank out more copper from its mines – including Escondida, the largest copper mine in the world jointly owned by BHP and Rio Tinto. Copper prices have dropped from around $3.25 a pound a year ago to the current $2.65 a pound. An increase in production might be able to offset falling prices and ease Chile’s ballooning trade deficit. 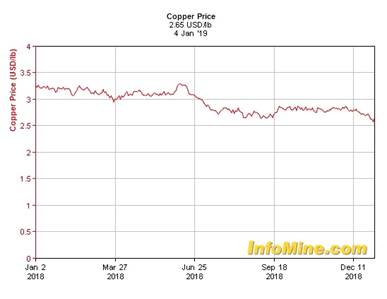 But there’s a problem. It’s a known fact that copper ore grades at Chilean mines are on the decline. Grades have dropped about 25% in Chile over the last decade – highlighting the urgent need for grassroots exploration to arrest the trend. 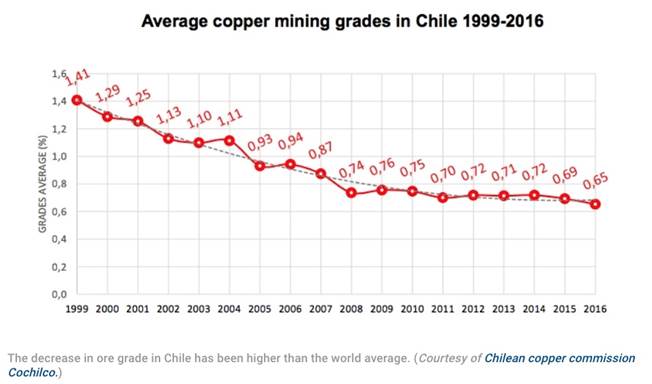 Copper explorers are also aware that the industry is heading for a supply deficit; by 2034, demand is expected to exceed supply by more than 15 million tonnes. 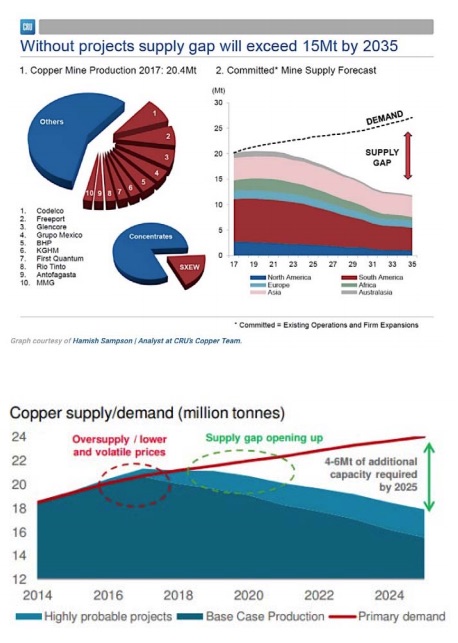 Cochilco recognizes Chile’s declining copper grades in its report, noting production from existing mines will decline 19%, but the drop will be offset by new mines and expansions. 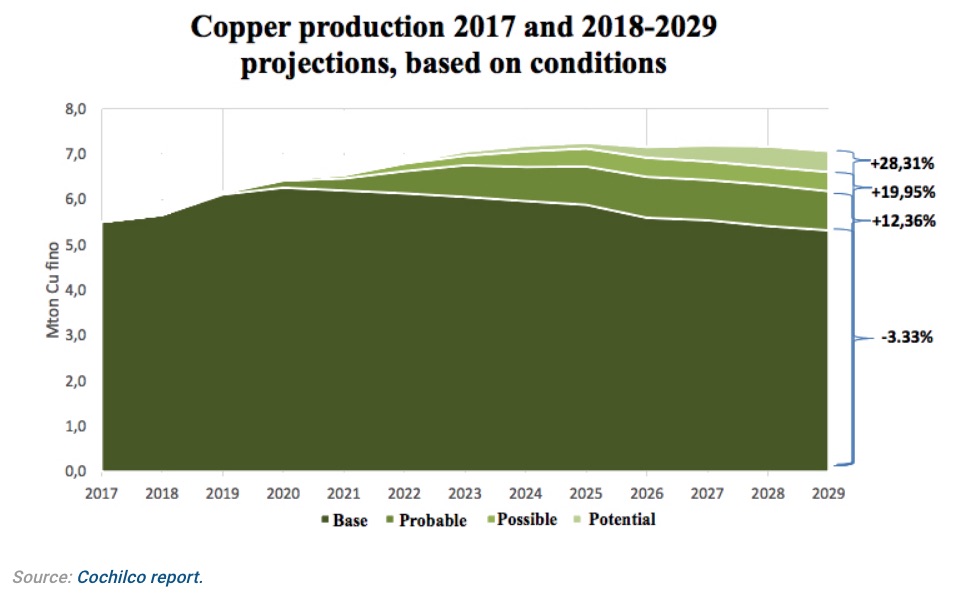 However critics say these expansions are unrealistic and unlikely to come to fruition anytime soon. Los Bronces and Collahuasi are already high-grading (processing higher-grade ore) from their mines and can’t do that anymore once that ore runs out because they are working highly-disseminated porphyry deposits (ie. no high-grade veins). Escondida is expected to see grades fall 15% until 2022. The Quebrada Blanca expansion won’t be online until 2024, and that’s if Teck can find a partner to kick in at least $2.5 billion.

Chile also has serious water and power issues that are likely to crimp higher production.

We’ve already mentioned the fight over water between SQM and Albemarle, and the Chilean government’s efforts to restrict water rights, in the Salar de Atacama – the center of Chile’s lithium production. With most of Chile’s mining taking place in the north, copper mines are also affected by water restrictions.

Antofagasta and BHP are among the mining companies hit by a ban on new permits to extract water from the southern portion of the salar’s watershed, which supplies BHP’s Escondida, the world’s largest copper mine, and Antofagasta’s Zaldivar Mine.

Another head-scratcher of a headline is a story from Reuters saying that Chile’s copper industry plans to triple its use of seawater in the next decade, as it struggles to deal with water shortages. According to Cochilco, the amount of seawater used for ore processing is expected to jump 230% from 2018 levels – satisfying nearly half of mining companies’ demands for water.

“More and more miners are building their own desalination plants or using water straight from the ocean to confront shortages of water,” the report said.

Seriously? Desalination is expensive, and is bound to hike production costs. If copper prices don’t rise, expect some major corporate bleeding to occur. A few years ago a desalination plant was built in Carlsbad, California. An article in The Mercury News about it had some interesting numbers to report. For instance:

Desalinated water typically costs about $2,000 an acre foot — roughly the amount of water a family of five uses in a year. The cost is about double that of water obtained from building a new reservoir or recycling wastewater, according to a 2013 study from the state Department of Water Resources.

In Carlsbad, two gallons of seawater will be needed to produce each gallon of drinking water. And to remove the salt, the plant will use an enormous amount of energy — about 38 megawatts, enough to power 28,500 homes — to force 100 million gallons of seawater a day through a series of filters.

Good luck producing copper at a profit with those kinds of input costs. The plant, by the way, cost $1 billion.

Also, it’s not as if nobody else lives in the northern half of Chile and miners are free to take all the water. Indigenous populations are also competing for water rights and dealing with contaminated water supplies, the same as First Nations communities in northern BC and Alberta that have found their drinking water poisoned by oilsands and fracking operations.

A little-known fact: in Chile, water resources are private. The 1981 Water Code “enshrines free market water economics to facilitate resource use and secure property rights under competitive conditions,” reads a 2016 article in The Conversation. “In practice, the code has failed to coordinate water use and resolve river basin conflicts, and has only increased private speculation, hoarding and the monopoly over water rights.”

Forcing water users to pay a fee for unused water in order to avoid speculation has not protected the water rights of indigenous communities, The Conversation states.

It cites the case of the Atacameño people, who lost a large amount of water to mining companies because they weren’t made aware of the need to officially register their water rights.

And then there’s power. Imagine how much electricity it costs to run a mine like Escondida. Then think about all the planned expansions; only the main ones were mentioned above.

Around five years ago Chile was facing an energy crisis. With mining accounting for about a third of energy consumption, planners wondered how Chile would get enough power to feed the expected increase in copper production to feed hungry Asian markets. The problem was exacerbated by a drought on hydroelectricity production and a cessation of natural gas deliveries from Argentina, which needed the gas for its own consumption. Electricity prices rose 20% and were predicted to increase 34% in the next decade.

The result was a switch to renewables. Chile became the first Latin American country to produce 1GW of solar power, and by 2050 the country wants to source 90% of its power from renewables.

However Chile is still highly dependent on fossil fuels. It has little oil and gas of its own but in 2015 used fossil fuels for three-quarters of its total energy mix. While a new 600-km transmission line was recently completed to connect the northern half of the grid to the southern half, the chief beneficiaries will be the inhabitants of central Chile (Santiago and surrounding areas) where the population will see electricity prices drop, according to PV Magazine. If the oil price jumps, mining companies expanding their operations could be in trouble.

Will the country be able to ramp up enough solar power to feed copper mine expansions, or will it continue to rely on fossil fuel power such as LNG or coal-fired power plants to crush and grind copper ore into concentrate? If it’s the latter, are Chileans prepared for greater carbon emissions, air and water pollution rather than less, as dictated by the government’s plan to use 90% renewables by 2050?

These are questions that haven’t been asked, but they should be, if Chile’s plan to increase copper production to 7 million tonnes a year is to be taken seriously.

An example is Rockridge Resources (TSX-V:ROCK) The recently IPO’d company has an option on the Knife Lake Copper VMS project in Saskatchewan, currently owned by Eagle Plains Resources (TSX-V:EPL). The 85,196-hectare property is estimated to contain between 300 and 350 million pounds of copper-equivalent.

Unlike South America, Canada faces no limitations regarding water and power. The country is politically stable, has several undeveloped copper and polymetallic deposits, and an experienced mining workforce. Saskatchewan was named the second most attractive jurisdiction for mining investment in the world after Finland, according to the latest Fraser Institute rankings.