Wanna buy a copper mine? Ask a junior

Copper is one of the most abundant metals among the world’s mined commodities, but getting your hands on a new copper mine is getting tougher and tougher. Despite the major miners wanting to add new supply to their pipelines, nobody wants to sell, and that is putting a renewed focus on high-quality development projects like the Ootsa project being explored by Surge Copper (TSX.V:SURG).

Bloomberg explains the dilemma being faced by potential acquirers:

So what’s the problem? For a start, nobody who owns a copper mine wants to give it up. Even when Glencore and Anglo American Plc were crippled by debt during the 2015 commodity slump, neither was willing to entertain an offer from Rio for their holdings in the giant Collahuasi deposit in Chile, according to people familiar with those talks, who asked not to be identified.

When it comes to listed companies, there aren’t that many options — U.S.-based Freeport-McMoRan Inc. and Canada’s First Quantum Minerals Ltd. are among the only copper-focused producers of any real size.

They all see the potential in copper, with its multiple uses including in construction and telecommunications, and its growing demand due to its importance for renewable energy applications and electric vehicles, where copper is used in the electric motor, batteries, inverters, wiring and in charging stations.

They also know about the coming copper crunch. Mine supply has failed to come to fruition due to regular labor disruptions at the world’s major copper mines like Grasberg in Indonesia and Escondida in Chile. KPMG is predicting that by 2020 global copper demand will outstrip mine output. 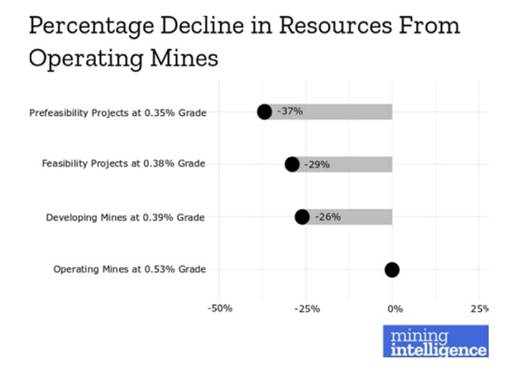 London-based commodities analyst CRU says unless new investments arise, existing mine production will drop from 20 million tonnes to below 12 million tonnes by 2034, leading to a supply shortfall of more than 15 million tonnes. That’s because over 200 copper mines are expected to run out of ore before 2035, with not enough new mines in the pipeline to take their place. 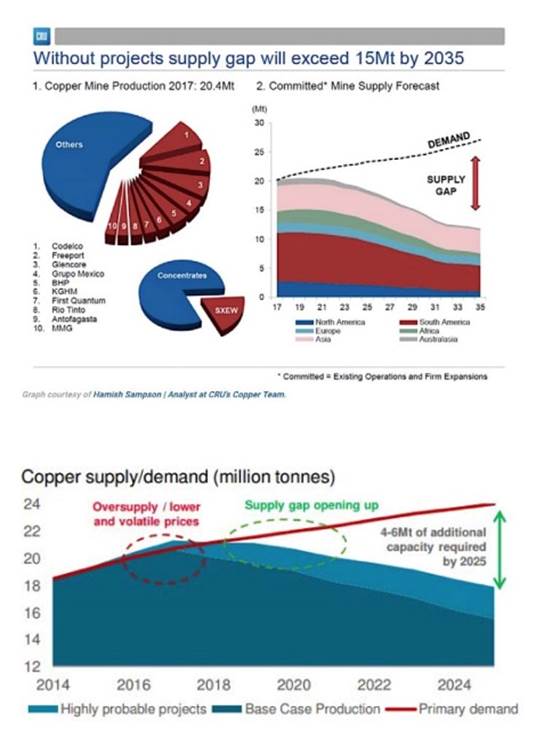 That brings us back to buyers and sellers. As Bloomberg’s chart below indicates, big copper deals have all but ground to a halt. 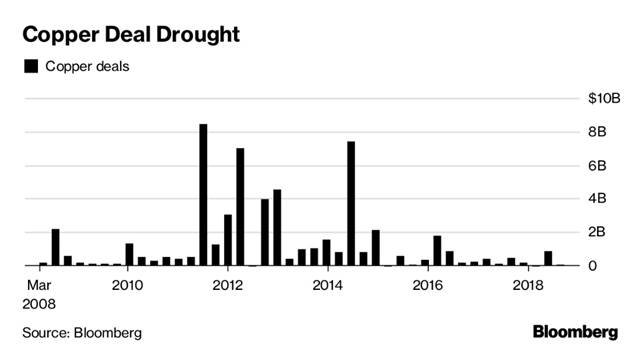 Compared to 2012 and 2014, when around $8 billion in copper mining M&A occurred, 2018 so far is under $1 billion – despite Anglo American agreeing in June to a $600 million investment by Mitsubishi for a 40% stake in its Quellaveco copper project in Peru. Even a hostile takeover attempt this week by Lundin Mining for Nevsun Resources, with a mine in Eritrea and Serbia, may not do the trick. Nevsun is saying the $1.4 billion cash offer undervalues the company, even though it’s at an 82% premium to Nevsun’s closing price on Feb. 6, when Lundin first indicated an interest in the Timok copper-gold project in Serbia. Nevsun is reportedly looking for $5 a share.

And despite the copper price taking a hit recently due to uncertainty over trade disputes, the red metal is still a popular item for thieves. Specialized gangs in Chile are regularly stealing copper cathodes and concentrate from trains running through the Atacama Desert in Chile, with about 40 incidents reported so far this year compared to just six in 2014. The “moles” as they called, are getting more brazen:

A new method is known as “the anchor.” When trains slow down in steeper areas, gangs hook a mooring line to a pile of cathodes and throw an anchor onto the railway lines. As the train advances, the pile weighing about 350 kilos (772 pounds) is dragged off the wagon and quickly picked up by trucks.

If big, existing copper miners aren’t selling their properties – in whole or stakes – that leaves the smaller development companies to pick up the slack.

“Any company with half a balance sheet is not going to be selling a copper asset at this point,” Bloomberg quotes Richard Knights, an analyst at Liberum Capital Markets. “The only place they can extract value is development assets, where they buy and develop themselves.”

Where should they be looking? How about northwestern British Columbia. With excellent geology, a storied mining history, and a perfect storm of factors (new deposits, new infrastructure, declining snow cover, new geological theory, higher gold price, 2017 successes this mineral rich area is one of the safest bets for a copper play.

Surge Copper’s Ootsa property is an advanced stage copper-gold exploration project containing the East Seel, West Seel and Ox porphyry deposits. It is located adjacent to the Huckleberry open-pit copper mine previously operated by Imperial Metals. Surge Copper completed a PEA in 2016 showing the potential for a 12-year mine that would produce 324 million pounds of copper, 185,000 ounces of gold, 15.8 million pounds molybdenum and 3 million ounces of silver. A resource estimate done the same year shows 1.1 billion pounds of copper and over a million ounces of gold, in the measured and indicated categories.

What is special about Surge Copper is that the company has three scenarios that could play out for it. On June 26 Surge announced the start of its 2018 exploration program with the construction of drill pads, with drilling starting the first week of July.

The proximity of Surge Copper to the currently-shuttered Huckleberry Mine means it is an ideal takeout target for Imperial Metals should Imperial need more mineralization to feed its aging, currently shuttered mine, which is estimated to only have about five more years of minelife. However, Surge also has enough potential reserves for a stand-alone operation, which could either interest an investor wanting to partner with it if Surge Copper goes mining, or a major who buys the company outright. All three scenarios are good for Surge investors, who are bound to see a dramatic share price rise if any of these possibilities takes place.

A lack of sellers in the copper market right now bodes well for junior copper explorers like Surge, whose Ootsa property could turn into the next big copper mine that would be of interest to a potential acquirer. That’s why I have SURG on my radar screen and own shares.