Watch out Elon Musk, Herbert Diess is pulling up beside you at the light.

Most North Americans have never heard of Volkswagen’s CEO, but he may be getting more face time after announcing on Monday that his company is planning on building an electric vehicle in the United States.

Germany’s Volkswagen said it will invest $800 million to construct a new electric vehicle – likely an SUV – at its plant in Chattanooga, Tennessee.

The announcement is part of a greater strategy to become the most profitable manufacturer of electric vehicles (EVs). In December Volkswagen said it will spend $34 billion on “e-mobility initiatives” including electric and self-driving vehicles, and $57 billion on battery procurement, for an eye-popping total of $91 billion. That includes 50 battery-electric and 30 hybrid-electric models by 2030, including 12 electric models for Audi. It plans to eventually offer electric version of all 300 of its models, among the 12 brands it owns.

Reuters reported that VW will sell 150,000 EVs by 2020 and 1 million by 2025. But Diess reportedly told German car magazine Automobilwoche that Volkswagen has acquired the batteries to produce 50 million electric vehicles!

To put that in context, last October sales of electric vehicles in the United States reached 1 million – versus around 4 million worldwide.

The company has already begun converting three car plants in Germany to build EVs, with the first model to roll off the production line this year at Zwickau, which currently builds the VW Golf and the Golf Estate. The plant will eventually have a production capacity of 330,000 electric vehicles.

As for the Chattanooga plant, production is slated for 2022, and is expected to add another 1,000 jobs.

Could Volkswagen’s plan to infiltrate the North American car market with an EV, in much the same way the Volkswagen “Beetle” did in the 1960s, be the beginning of an electric vehicle hub in the southeastern United States to compete with Tesla’s Gigafactory in Nevada? It certainly appears so.

Last week we reported that SK Innovation, a Korean company, plans to invest US$1.67 billion to build the first electric vehicle battery plant in the United States, as it seeks to take advantage of burgeoning demand for electric vehicles (EVs).

Earlier this month the firm doubled down, saying it is considering plowing an additional $5 billion into the project, planned for Jackson County, Georgia.

While most new battery cell manufacturing capacity is headed to Europe and Asia, where automakers are more aggressively targeting EVs, two of SK Innovation’s customers – Mercedez-Benz and Hyundai-Kia Motors – will need battery cells in the US and is therefore investing in local battery production.

Locating the EV battery plant in Georgia is strategic because Hyundai, Mercedes and Honda operate assembly plants in nearby Alabama, while Mazda and Toyota have broken ground on a factory in Alabama. Volkswagen has an assembly plant in Chattanooga, Tennessee.

It’s hard to believe that SK Innovation didn’t know about Volkswagen’s plans to set up a production line of EVs in Chattanooga, before committing $1.67 billion and than another $5 billion. It begs the question, what are the other auto manufacturers in that part of the United States planning for EVs? Knowing that is extremely interesting, because it give us a glimpse of what could be a future electric vehicle ecosystem, where batteries are made in the United States possibly even from metals mined in America – like lithium, nickel, cobalt and graphite – then sold to EV makers in the US – likely the southeastern US anchored by SK Innovation’s huge battery plant in Georgia.

Automakers throughout the world are reportedly planning to spend at least $300 billion  on EVs within the next five to 10 years – with $135 billion directed to China, currently the largest EV market. 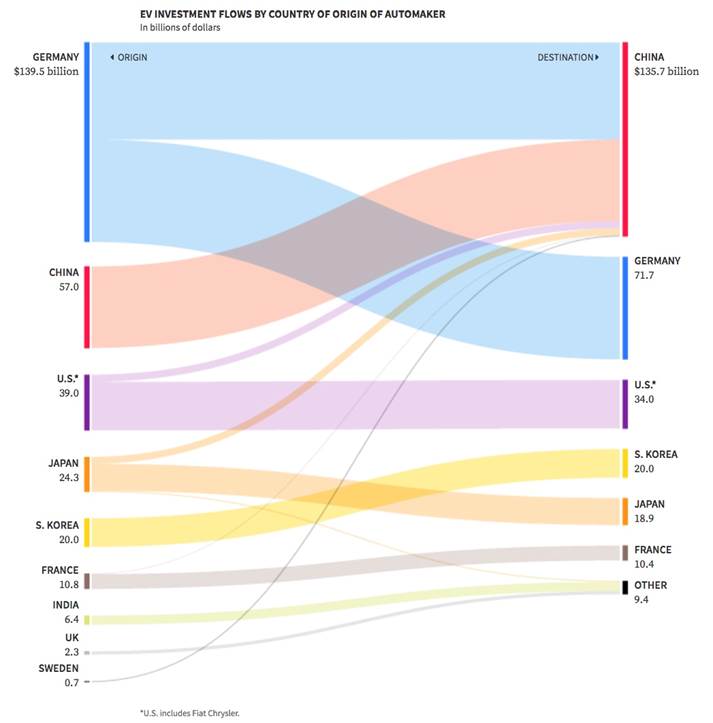 Here are the EV plans of automakers currently manufacturing in the southeastern US:

Daimler (Mercedes/ Smart): Has budgeted $42 billion to roll out 130 electric vehicles by 2030 including hybrids and fuel cells; $30 billion is for batteries alone. Daimler Smart brand will go all electric by 2040. The company has invested $1.9 billion in China with Chinese state-owned company BAIC and is talking about making Smart EVs in China.

Hyundai/ Kia: The two companies will invest $20 billion over the next five years in electric and self-driving vehicles plus batteries. It expects to sell 14 EVs, 12 hybrids and two fuel cell electrics by 2025.

Toyota will spend $13.5 billion on battery technology through 2030. The Japanese company, which has a joint venture with Mazda and Denso to build electric vehicles, plans to roll out 10 models in China by 2020, and sell 5.5 million electric vehicle models by 2030.

Notably, Toyota and Mazda have committed $1.6 billion to construct a new auto plant in Huntsville, Alabama. The plant will produce regular ICE (internal combustion engine) vehicles – Mazda will make its crossover vehicles for the US market there, and Toyota will produce the Corolla.

Getting the plant, to open in 2021, is considered a win for the Trump Administration, which has been prodding foreign automakers to build plants in the States. Toyota has 10 US plants in eight states, arcing from West Virginia through Kentucky, Indiana, Alabama, Mississippi and Texas.

Its competitor Honda is spending half a billion to go two-thirds electric by 2030. Honda will buy its EV batteries from GM and is investing $180 million in an EV/battery plant in Thailand, and $130 million for a plant in India. Another $470 million is going towards an EV plant in China.

GM is planning to sell its first EV this year, a 2020 Cadillac SUV built in Spring Hill, Tennessee, in a move designed to challenge Tesla and arrest the fall in the sale of Cadillacs, which dropped 1% in 2018:

GM said in 2017 it planned by 2021 to introduce a new dedicated flexible electric vehicle architecture and an advanced battery system to support the development of at least 20 new models in the United States and China. Much of Cadillac’s future growth is expected to come from China, the world’s largest car market.

Volvo announced that from 2019 forward, every car in its lineup will be fitted with an electric motor. That could mean a hybrid or plug-in hybrid. Plug-in hybrids combine a gas or diesel engine with an electric motor and a rechargeable battery. Unlike a conventional hybrid, PHEVs can be plugged in and recharged. When the battery runs empty, the ICE turns on and the vehicle operates as a conventional hybrid.

The Swedish automaker said its first electric model will be the XC40 SUV. The XC60 model notably will be manufactured in Volvo’s first US factory, in Charleston, South Carolina, followed by the XC90 in 2021. By 2025 Volvo wants half of its cars to be fully electric.

Who knew there is so much EV activity planned from automakers that already have manufacturing or assembly plants in the United States? Volkswagen is the first foreign car company to announce an electric vehicle production line in the US. Who will be next? And what will it mean for a potential mine-to-electric vehicle supply chain that does not yet exist? The potential is exciting.