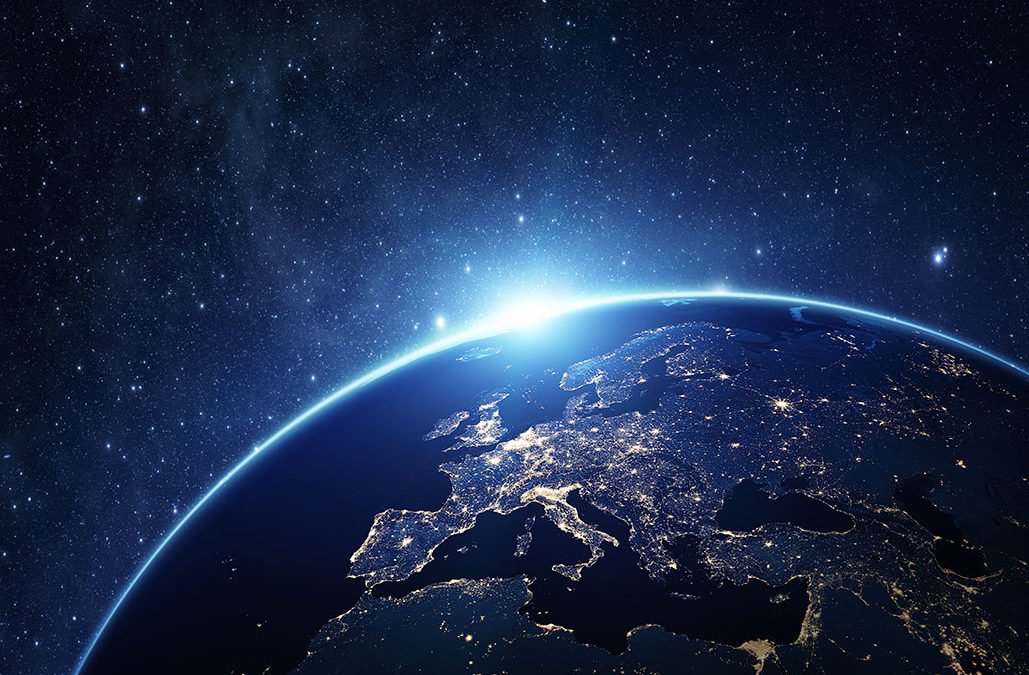 Planet earth from the space at night . Some elements of this image furnished by NASA

Between the Archean and the Holocene – the current geological period – volcanogenic massive sulfides (VMS) were formed on the ocean floor during ancient underwater volcanic activity. Where the Earth’s crust was thin, magma boiled up, forming volcanoes which erupted minerals that spewed into the ocean. Minerals also escaped through “black smokers”, mineral-rich plumes that blanketed the seabed. Eventually with the movement of tectonic plates, these mineral deposits ended up on land that was once underwater.

It’s fair to say, then, that VMS deposits have existed since the beginning of the Earth.

These deposits are sought after for mining because they usually contain a melange of base metals and sometimes precious metals including zinc, lead, copper, silver and gold. The minerals are often clustered together, making them relatively easy to extract.

VMS deposits contain mostly base metals and may have lesser amounts of precious metals such as gold, silver and platinum. They are often major sources of zinc, copper and lead, with gold and silver by-products.

We can see where the term “volcanogenic” come from, since the deposits are formed by underwater volcanoes. The “massive sulfides” refers to the large accumulations of sulfide minerals that form on or below the ocean floor.

VMS deposits consist of a massive or semi-massive stratabound sulfide lens. Most are underlain by a sulfide-silicate stockwork vein system. Individual massive sulfide lenses can be over 100 meters thick, tens of meters wide, and hundreds of meters in strike length. VMS deposits range from 200,000 tonnes to more than 150 million tonnes and most often occur in clusters. 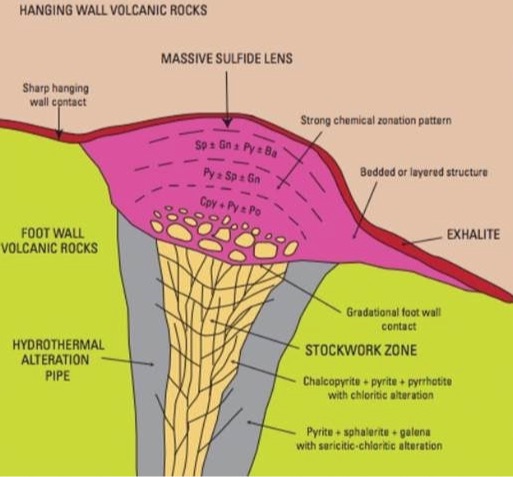 VMS deposits are estimated to have supplied over 5 billion tonnes of sulfide ore. They currently account for 22% of the world’s zinc production, 9.7% of the lead produced, 6% of copper, 8.7% of silver and 2.2% of gold.

An estimated 900 VMS deposits are found worldwide, averaging about 17 million tonnes each. And they are still being formed, mostly along tectonic ridges where plate movements form cracks in the Earth’s crust – allowing a conduit for ancient minerals to travel up through hot liquids and be deposited, through billowing white and black clouds, onto the sea floor.

The Iberian Pyrite Belt running through Spain and Portugal has about 90 VMS deposits, with some larger than 100 million tonnes. Large VMS mines are in Scandinavia including Boliden’s Garpenberg mine, a 120-million-tonne VMS monster.

VMS deposits in Canada include Flin Flon, Bathurst, Snow Lake and Noranda. The Kidd mine in Quebec, the deepest base-metal mine in the world, is a VMS deposit that has been in production since 1966.

VMS deposits have long been recognized, by both majors and juniors, as potential elephant country – and because of their polymetallic content these types of deposits continue to be one of the most desirable because of the security offered against fluctuating prices of different metals.

Twenty economically viable VMS deposits were discovered in the Noranda District over 85 years, including Noranda’s Horne Mine in northern Quebec which produced 11.6 million ounces of gold and 2.5 billion pounds of copper from 1927 to 1976.

Zinc had a banner year in 2017, climbing about 38% (between 2016 and 2018 zinc rocketed 132%) but the base metal had a reality check in 2018 and 2019. Despite falling inventories squeezing supply, US-China trade war worries weighed heavily on the entire base metals complex including zinc.

However despite trade war headwinds, and some demand destruction due to the pandemic, zinc’s long-term fundamentals are solid. Some very large zinc mines have been depleted and shut down in recent years, with not enough new mined supply to take their place.

MMG’s shuttered Century mine for example used to supply 4% of the world’s zinc. Between the shutdown of the Lisheen mine in Ireland, Century, and Glencore’s Brunswick and Perseverance mines in Canada, over a million tonnes was ripped from global zinc production.

The closed mines represent an estimated 10 to 15% of the zinc market. On the flip side, there have been few discoveries or big zinc projects planned. This is setting the zinc market up for a supply shortage.

Consider that two of the largest new zinc mines will not produce enough ore to make up for all of the recent closures and output cuts. While New Century this year restarted its zinc mine that closed in 2016 – at the time the world’s third largest – “it will take time for Century to ramp up and longer still for that flow of raw material to make a significant impact on the refined metal section of the supply chain,” according to Reuters metals columnist Andy Home, who believes the zinc market has entered a period of peak tightness.

Australia’s Dugald River mine, opened in 2017, and Vedanta Zinc’s Gamberg mine in South Africa, commissioned last July – can between them only produce a combined 420,000 tonnes of zinc concentrate, less than 3% of global demand.

Wood Mackenzie states that zinc mine closures, attrition and demand growth will require 2.2 million tonnes of new mine capacity a year. 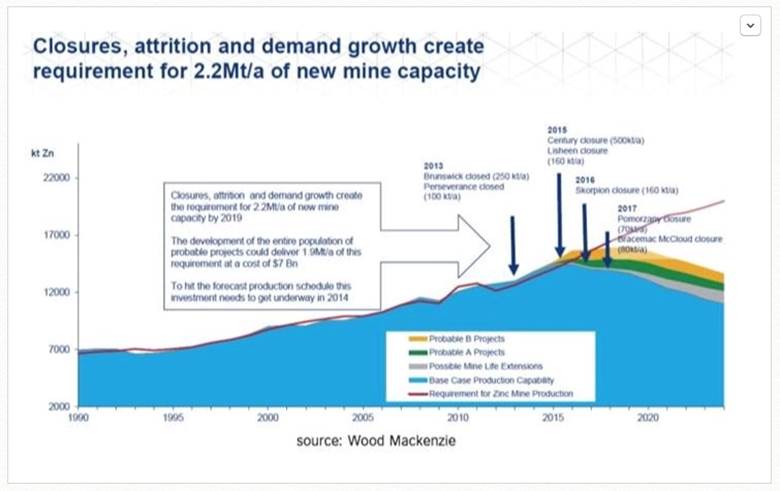 As for zinc demand, it’s not going away. Despite zinc’s low profile among investors, it is the fourth most mined metal. While its primary use is to stop steel from rusting, other applications are shoring up demand. Adding zinc to fertilizer increases soil productivity, and there is research being conducted to develop a nickel-zinc battery for use in electric vehicles. Zinc, of course, is already used in alkaline batteries.

Zinc is also used heavily in infrastructure build-outs. This includes desperately needed bridges, public buildings, power stations, dams etc. in the US, much of the developing world, and China’s Belt and Road Initiative which along with needing billions of tonnes of copper, is going to require a lot of steel containing zinc.

Zinc alloys including brass are used in corrosion-resistant marine components and musical instruments, to name a couple of more applications.

According to the US Geological Survey, in 2019 the top zinc-producing countries were China, Peru, India and Australia. In terms of reserves, Australia has the most zinc at 68 million tonnes, second is China at 44Mt, and Russia and Mexico tied for third at 22Mt, of the world’s identified zinc reserves of 250 million tonnes. 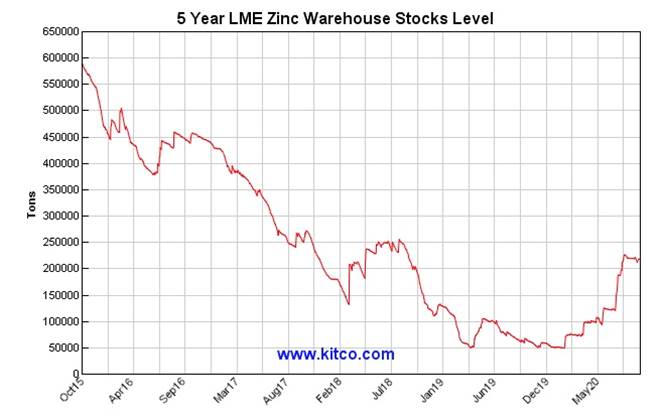 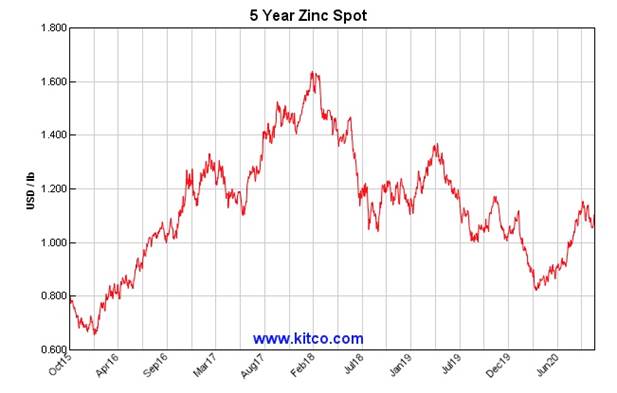 VMS deposits make beautiful mines. You have rich base-metal content and often precious metals to boot. Usually when gold and silver prices are up, the economy isn’t doing so well and base metals prices are down. The reverse happens during economic booms. This makes a VMS mine a winner during all economic cycles.

They also have scale. A junior that comes upon a VMS deposit will be the belle of the ball as far as attracting mining company suitors looking for a partner, a property, or an acquisition, since a VMS mine can produce high metal volumes for many years.