Universal Copper (TSX-V:UNV, Frankfurt:3TA1) has expanded its horizons, literally, with Wednesday’s announcement that the TSX Venture Exchange has approved a deal between Universal, Max Resource Corp and a Max subsidiary, to acquire a portion of Max’s Gachala Copper Project in Colombia.

“We see the approval of this transaction as a very positive step forward in the very carefully planned growth of our Company. Our technical team feels Colombia in general and Gachala in particular is a fantastic copper frontier with excellent potential for future copper discoveries,” says Clive Massey, Universal Copper’s CEO.

To obtain the seven claims, Universal Copper, formerly Tasca Resources, will issue Max 6 million shares at an approximate value of $375,000 (UNV closed at 6.5 cents a share on Wednesday).

On Feb. 26 Tasca announced a name change to Universal Copper, and a two for one share consolidation (ie. the number of outstanding shares were cut in half).

When all is said and done, UNV will have about 42 million shares outstanding, with Max taking a 14.3% ownership stake in the company.

About $50,000 of the transaction’s value has been dedicated to a first phase of exploration at the North Block of Gachala, a 53,538-hectare sedimentary copper project owned by Max Resource (TSX-V:MXR), the company exploring for conglomerate gold in Colombia’s Choco department.

Max will retain three-quarters of the Gachala Copper Project (40,258 ha) as Universal Copper begins exploring the North Block. The deal for UNV to acquire the North Block was finalized on April 24.

Two of the seven mineral license applications are contiguous to an area where historical exploration returned rock sample values ranging from 1.6% to 7.82% copper. These days anything above 1% is considered high-grade copper.

Rio Tinto did stream sampling and limited rock sampling in 1999.

The Gachala Project underlies a 250-km by 120-km belt of Devonian Cretaceous rocks in a geological setting believed to be analogous to the Zambian copper belt. This belt hosts Zambia’s “Big Four” copper mines – Barrick Lumwana, FQM Kansanshi, Mopani and KCM (Konkola Copper Mines) – which account for around 80% of Zambia’s annual copper production.

Sitting at the edge of the Andean Copper Belt, which produces about 40% of the world’s copper, the Gachala Project’s 30 claims cover 107 km of the highly prospective contact between the Devonian-Permian red beds and overlying Cretaceous reducing black shales, one of the settings typical of sedimentary copper deposits.

The North Block’s seven claims cover 48 km of this contact. 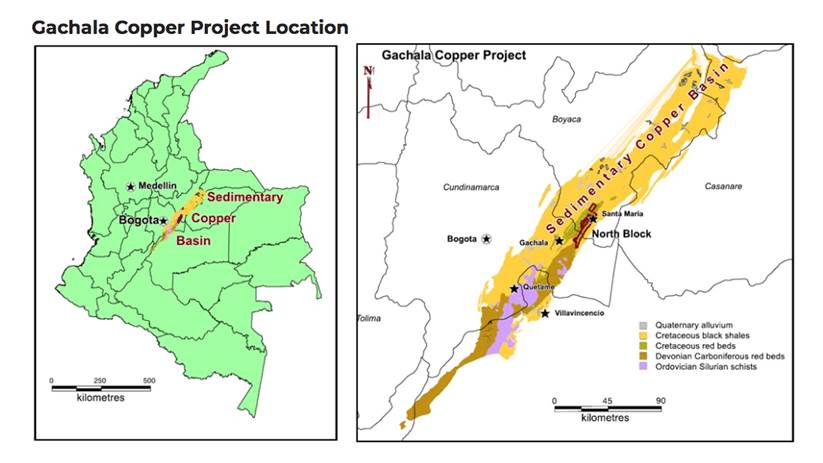 Sporadic historic exploration throughout the middle 5,625 sq km of the Sedimentary Copper Basin has identified several areas of copper mineralization, a number of which appear to lie on or near the Gachala project’s mineral license applications.

A technical report filed by Universal Copper at the beginning of June recommended that rock and soil sampling follow a Long Wave Infrared Imaging Survey (LWIR), which identified copper anomalies associated with 40 kilometers of prospective unconformity between Devonian- and Cretaceous-age sediments.

Originally discovered in 1974, the Poplar Project southeast of Houston, British Columbia has been heavily explored by a number of companies including BHP, the world’s largest mining company. Over 30,000 meters have been drilled, in close to 300 holes. A number of the holes bottomed in mineralization; the potential deposit delineated so far is open at depth and along strike at surface.

Universal’s 2019 exploration program at Poplar will include prospecting, mapping, soil and rock sampling, focused on the western part of the property where a forest fire last year likely exposed a number of mineralized outcrops.

UNV will also be guided in its exploration efforts by three holes drilled in late 2018. The drills cut mineralization consisting of disseminated pyrite/chalcopyrite, and stockwork vein to veinlet pyrite, chalcopyrite and molybdenite.

The best results were:

For perspective, most copper mines in BC are under 0.4% copper, so the grades are above average.

Before it drills the 62,000-hectare land package, Universal’s team is ground-surveying gold targets identified during previous exploration programs, and by a long-wave-infrared (LWIR) survey completed at the end of 2017.

A key takeaway from the survey was a direct correlation found between the Silver Queen property, owned by New Nadina Explorations, and the Poplar deposit, particularly the identification of sericite, an alteration mineral frequently associated with hydrothermal mineralization, such as vein and porphyry deposits. 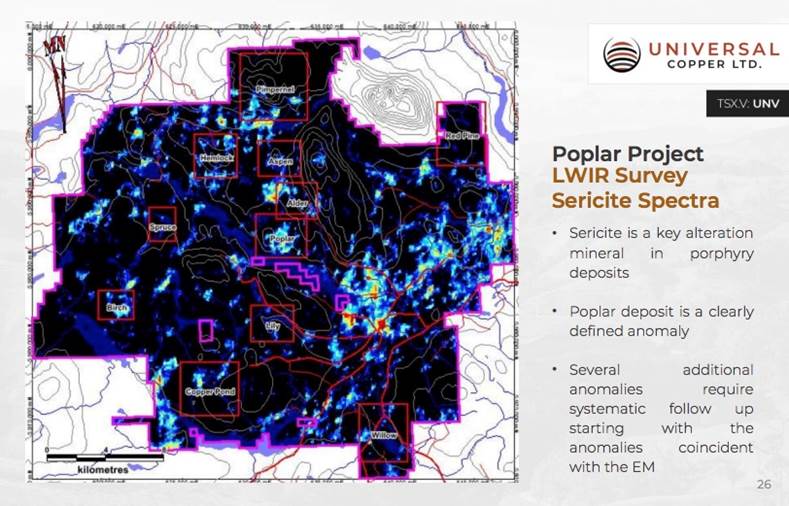 Porphyry deposits are usually low-grade but large and bulk mineable, making them attractive targets for mineral explorers. Gold, copper, silver and lead are among the metals found in porphyries.

British Columbia is known for its low-grade but large copper-gold porphyries including Highland Valley, KSM, Prosperity and New Afton.

Adding to Universal Copper’s project pipeline, earlier this month the copper junior adjusted an earlier option agreement it had with Canarc Resource Corp and Sydney Wilson, regarding the Princeton gold property in southern BC.

The 14,650-hectare project is in good company. It lies11 km south of the producing Copper Mountain copper mine, 95 km from Westhaven Ventures’ (TSX-V:WHN) Shovelnose property, and 35 clicks from Princeton, a good-sized hub for labor and mining supplies.

Clive Massey, Universal Copper’s CEO, said that optioning off Princeton is a good move for UNV as it pivots toward copper exploration:

“We have always felt the gold veins at Princeton represent an excellent geological target. With Universal’s shift in focus to copper, we are ecstatic to have the great explorers at Canarc bring their expertise to the Princeton Project and fully expect them to meet with continued successes.”

Mineralization is found mostly in quartz veins ranging from 0.3 to 1.8 meters wide.

This month, Canarc is expected to start an exploration program at Princeton which includes prospecting, mapping, sampling and trenching of the gold vein prospects, as well as evaluating geochemical and geophysical methods to detect buried gold veins. The property is permitted for 10 drilling sites and 50 trenching sites.

With two great copper projects and a gold project under option, Universal Copper has its work cut out if it wants to impress the market with exploration success. The junior’s chances are boosted significantly due to its stellar management team that brings decades of combined mining industry experience.

CEO Clive Massey has been the CEO of a number of junior resource companies and coordinated successful marketing program for Lumina Copper, acquired by First Quantum Minerals for $470 million in 2014. Director Wesley Pomeroy is a 30-year professional geologist with an MBA. Two geologists serve on the technical advisory board, including Tim Henneberry who has 37 years experience in both exploration and mining production, at the senior level, and Ricardo Valls, who has spent nearly four decades managing all phases of the exploration and mining cycle.

Wesley Hanson was brought onto the board of directors in May. Another professional geologist, Mr. Hanson has held several senior positions in the mining sector, bringing over 32 years of industry experience, including President and CEO of Noront Resources (2009-12), VP Mine Development, Western Goldfields / Silver Bear Resources (2006-09), Director of Technical Services, Kinross Gold (2002-06) and Project Geologist, SNC-Lavalin Engineers and Constructors (1999-2002). He is currently COO and technical advisor to Unigold Inc.

Just five months out from a name change and a shift in focus to copper, we see that Universal Copper means business. We like that Universal already has two very prospective copper projects to get going on – one of which has geology analogous to such monster copper mines as Kamoa-Kakula, the largest undeveloped high-grade copper discovery in the world.

Its Poplar project in British Columbia has seen a lot of historical drilling and it comes with a resource – meaning Universal is able to skip that step and move straight into proving up reserves and starting a PEA. The prospect of finding a porphyry among BC’s jumbled copper-gold mineralization is very exciting.

And we have the potential for a high-grade hit at Princeton, which has seen some bonanza grades in the quartz veins, albeit in short intercepts so far.

Universal Copper has a bulked-up treasury after a $2.1 million financing, more than enough to complete the $1 million budgeted for exploration this year.

We like the company’s very experienced management team, who is knee-deep in geology, bringing knowledge of both exploration and mining to UNV.

Finally, we like the company’s tightly held share structure with just 35.9 million shares outstanding, not including options and warrants. Max owning 14.3% of the shares is a good sign; it minimizes the risk of share dilution.

For all of these reasons I have UNV on my radar screen.

This article is copyright protected and may not be reproduced in whole or in part or retransmitted or reposted without the authors written permission.