Universal Copper kicks off summer exploration in BC

Universal Copper (TSX-V:UNV) is forging ahead on exploration at its Poplar copper-gold-silver-moly property, by following up targets identified earlier.

Poplar is one of two copper plays the re-named Universal Copper (formerly Tasca Resources) is focused on – the other being the North Block of the Gachala project in Colombia, that UNV acquired from Max Resource Corp.

While UNV waits for the Gachala transaction to go through, it is turning its attention to the Poplar project, located near Houston, BC

Before it drills the 62,000-hectare land package, Universal’s team wants to ground-survey gold targets that were identified during previous exploration programs, and by a long-wave-infrared (LWIR) survey completed at the end of 2017.

LWIR is a new mineral exploration technique that employs satellite imagery to uncover targets that were previously unavailable to exploration companies. LWIR bands can penetrate vegetation and other ground cover, to mathematically “fingerprint” mineralized areas.

That LWIR survey, done over 620 square kilometers, highlighted a 28-kilometer trend “interpreted to be hydrothermal alteration corridor extending from the Silver Queen property through the entire Poplar property, and identified numerous new exploration targets both within the corridor and throughout the remainder of the property as shown on the LWIR Sericite Interpretation Map,” according to the December 11, 2017 news release on SEDAR. 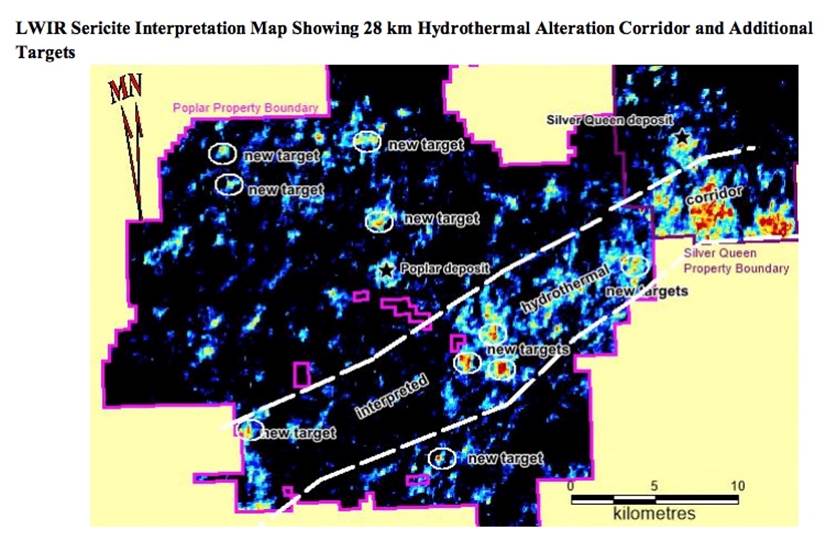 A key takeaway from the survey was a direct correlation found between the Silver Queen property, owned by New Nadina Explorations, and the Poplar deposit, particularly the identification of sericite, an alteration mineral frequently associated with hydrothermal mineral deposits, such as vein and porphyry deposits.

Porphyry is a geological term that refers to igneous rocks containing large-grained crystals such as feldspar or quartz dispersed in a fine-grained silicate matrix. Porphyry deposits are usually low-grade but large and bulk mineable, making them attractive targets for mineral explorers. Gold, copper, silver and lead are among the metals found in porphyries.

British Columbia is known for its low-grade but big copper-gold porphyry deposits including Highland Valley, KSM, Prosperity and New Afton. The lower grades are made up for with other metals found in the deposits like gold and molybdenum, making them more economic if or when copper prices slump.

BC is Canada’s largest copper-producing province and the red metal is BC’s second-most valuable mining commodity export, behind metallurgical coal.

Originally discovered in 1974, Poplar has been heavily explored by a number of companies including BHP, the world’s largest mining company. Over 30,000 meters have been drilled, in close to 300 holes. A number of the holes bottomed in mineralization; the potential deposit delineated so far is open at depth and along strike at surface.

Universal’s exploration program at Poplar will include prospecting, mapping, soil and rock sampling, concentrating on the western part of the property where a forest fire last year likely exposed a number of mineralized outcrops.

UNV will also be guided in its exploration efforts by three holes drilled in late 2018. The drills cut mineralization consisting of disseminated pyrite/chalcopyrite, and stockwork vein to veinlet pyrite, chalcopyrite and molybdenite.

The best results were:

For perspective, most copper mines in BC are under 0.4% copper, so the grades are above average.

UNV notes the first result (the 30m interval) backed up a hypothesis from an earlier induced polarization (IP) survey, that the mineralization continues to depth.

Universal’s timing couldn’t be better as far as the state of mineral exploration in British Columbia. At the Association for Mineral Exploration BC Roundup (AMEBC) conference in January, a speaker at a panel called ‘The B.C. Copper Advantage’ pointed out the high demand for copper in a future low-carbon, electrified economy (EVs, wind turbines etc.) has BC well-positioned.

“All of that is going to require a lot more copper, and our feeling is that British Columbia is probably as well-poised as any jurisdiction on the planet to take advantage of and exploit the opportunity,” said Craig Hart, director of the mineral deposit research unit at the University of British Columbia.

2018 was the second year in a row that mineral expenditures in British Columbia increased, according to the British Columbia Mineral and Coal Exploration Survey carried out by the provincial mining ministry, AME BC and Ernst & Young. Last year saw a 34% growth in exploration spending, totaling about C$330 million.

Even Rio Tinto is casting a discerning eye over BC.

Speaking at the opening ceremony of Roundup, the world’s second largest mining company’s Chris Welton, exploration director for the Americas, said Rio is scoping out British Columbia for a copper play.

“We would like to be exploring in BC but we just need to find the right project,” Welton told the Vancouver audience. “My exploration manager reminds me that to balance our portfolio in Canada, he wants a BC porphyry.”

That’s great news for copper juniors like Universal Copper that are working British Columbia’s rugged terrain, trying to build tonnage at what could be the next big copper mine in BC.

I like that Universal Copper has spread their risk with two good projects, Poplar and Gachala, in different jurisdictions – both of which are mining-friendly. The Poplar project is well-explored and has a resource estimate. It’s already achieved the first two steps of the derisking process every junior must fulfill. It has exploration potential at depth and along strike, to grow the resource and take it to the next step: a PEA.

The next few months should have plenty of news flow and opportunities for stock price appreciation.

For all of these reasons, I have UNV on my radar screen.