The next big thing in Nevada

Key to being a successful junior resource investor is doing your due diligence prior to taking a position in a junior, or for that matter, any publicly traded company.

That means going over the financials, fully understanding the business, the sector they’re operating in (gold, PGMs, base metals, etc.), what and where are their project(s), who are their competitors, who’s on the management team.

So how to pick a winner? A wise next step, after the management team passes muster, is to look for exploration upside.

Identifying the opportunity in an undervalued project is where that “sweet spot” of resource investing comes in – purchasing an undervalued stock that is strongly favored to move higher, booking a tidy shareholder profit along the way.

It is with this in mind that we present to you, dear reader, the case for potentially massive upside at Getchell Gold’s (CSE:GTCH) Fondaway Canyon project.

The high-grade resource begins near surface, is open at depth, and along strike.

That alone is impressive. But what really stands out to Ahead of the Herd, is the opportunity to add significantly more ounces if the structures, and ultimately, the potential source of this gold system can be identified, mapped and drilled.

Fondaway Canyon includes 136 mining claims covering about 2,220 acres, or 3.5 square miles, on land administered by the US Bureau of Land Management (BLM) in Churchill County, Nevada.

The entire project can be visualized as a vein swarm close to surface, with many mineralized veins trending east to west, shown in red in the map below. 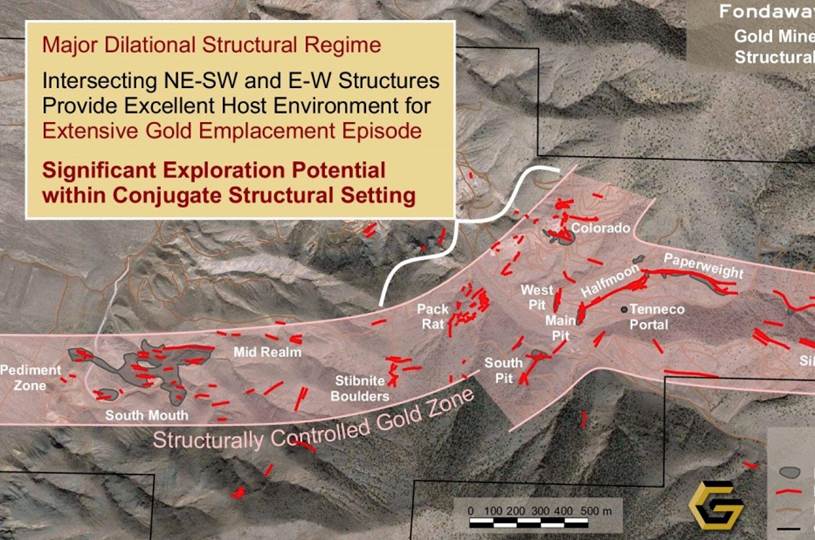 The majority of the 1.1 million ounces are hosted by the Paperweight, Halfmoon and Colorado zones, with the remainder in parallel veins or splays of the major veins – which range from 5 to 20 feet.

Put simply, this means that any grades below 3.43 g/t were excluded from the resource estimate. For ounces to be included, they had to be at least 3.43 g/t. (the cut-off grade is also known as the break-even grade). In Canarc’s 1.8m wide section, which runs mostly through the Paperweight, Halfmoon and Colorado zones, there were gold grades higher and lower than 3.43 g/t; but the average grade was 6.29 g/t (average grade of indicated and inferred resource).

Now, if we drop the cut-off grade, the indicated and inferred grades will be lower, but the number of ounces will definitely rise. With a higher gold price at say $1550 per ounce each gram is now worth $50 ($1550/31g) so the same $138.29 breakeven allows the cut off to drop to 2.76 grams Au which could add nicely to the resource ounces.

Interestingly enough Fondaway could also have a very attractive open-pit scenario that would need far lower grades to be profitable than the underground model used by Canarc.

Using this example, Getchell’s indicated and inferred grades would drop from the average of 6.29 g/t, but, the lower cut-off grade will capture more ounces, perhaps significantly more than the 1.1Moz identified in the 2017 resource estimate.

Key to the open-pit strategy is the area between the Colorado and South Pit zones. Historical data reveals multiple structures coming together in an east-west corridor of mineralization. Below, the cross-sectional map of the Colorado to South Pit section shows high-grade material at the top left – very closely spaced red dots > 3.0 g/t, and a cluster of oranges, greens and yellows. 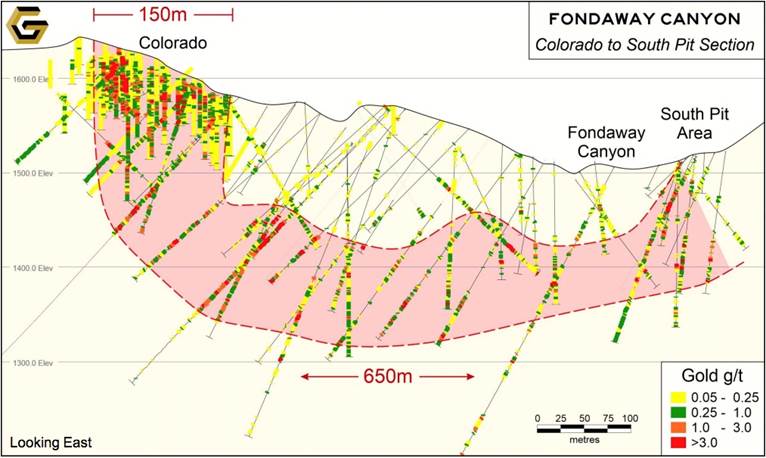 The drill intersections show lots of yellow (0.05 – 0.25 g/t) but there are plenty of green, orange and red dots too. This thick continuous zone of mineralization merges with the Halfmoon Zone to the east.

The drill map below readily shows the open-pit/ underground model potential we at Ahead of the Herd envision. 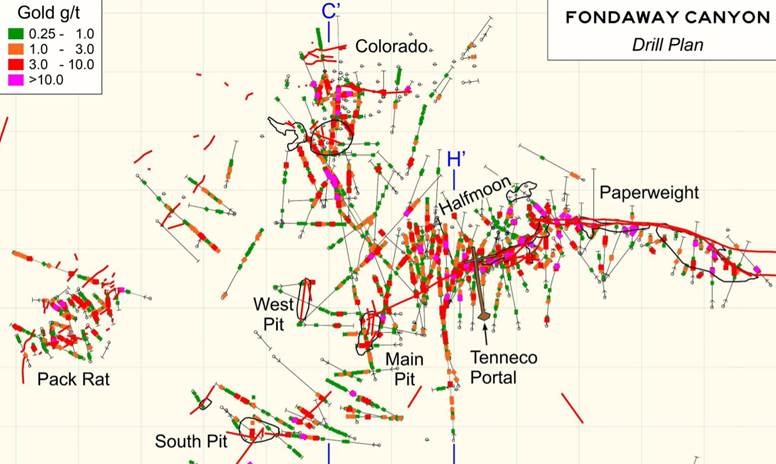 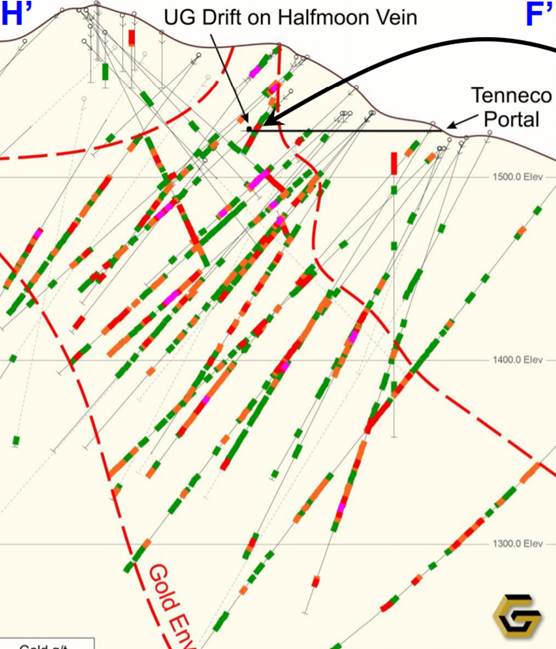 Between 1986 and 1996, Tenneco Minerals drilled over 500 reverse-circulation (RC) holes totaling 40,000 meters. In the Halfmoon zone they drove an adit (entrance) 540 feet into the hillside, to take bulk samples of the vein; high-grade gold intersections, drilled from an exploratory drift, indicate good underground mining potential. 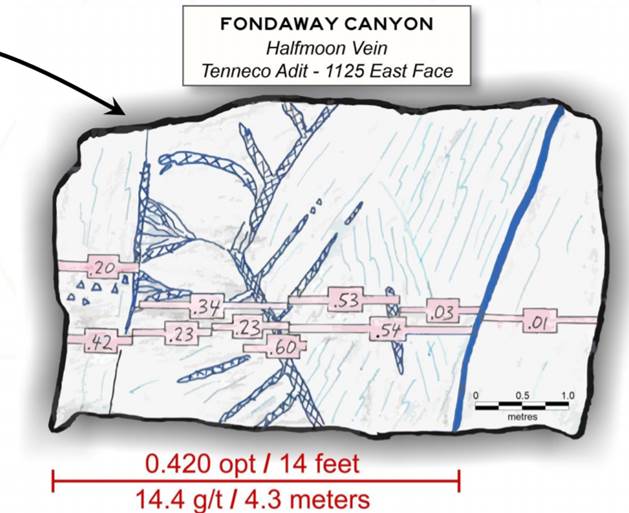 Where else, other then multiple near-surface oxide gold exploration targets, could add ounces at Fondaway Canyon?

The lowest-hanging fruit will be picked by driving a portal in from the creek bed, gaining access to Paperweight and Hamburger Hill, without sinking a shaft. There are also easy ounces available by peeling off the hillside at Silica Ridge.

Although limited drilling has been done on the steeper slopes further west, where  mineralization extends to the tops of mountain ridges, Canarc poked in a few holes yielding very promising 7 to 10 gram-per-tonne material.

I might of left the best for last. An intriguing option to us at AOTH, and what could be underpinning the entire structurally-controlled gold zone all the way to Hamburger Hill, is the Pediment zone, appearing at the left edge of the map below. The real prize might be the raw potential of the Pediment zone. It is here where Getchell Gold has the chance to test the geological theory that a large pool of gold might be sitting under the range-front, that fed a highly mineralized corridor with a number of targets, into the mountains as far as Hamburger Hill. 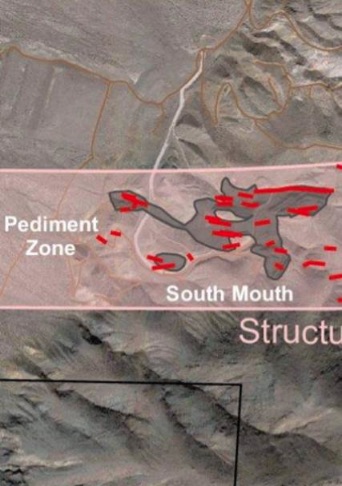 Underlying the plain is about 82 feet of alluvial (gravel-bed) cover, making for easy overburden removal. Visualize the pediment as a plain, the Carson Sink, that fronts the hills and valleys where the rest of Getchells Fondaway Canyon targets lie. 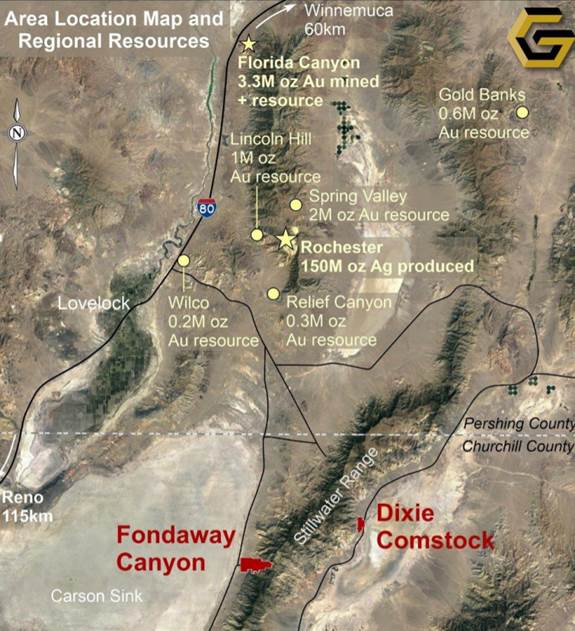 Two historical holes drilled only 800 feet apart, in the pediment west of the South Mouth pit, each pulled up significant mineralization – one hole had 0.74 grams per tonne over 30 meters; the other hole was 0.6 g/t.

While those grades aren’t enough to energize gold investors, there is a good possibility that the deposits found in the mountains are just the “smoke” from a major gold system that originates underneath the pediment.

“These results should be followed up with additional drilling to determine if a bulk tonnage, disseminated gold deposit exists in that area, or potentially offset extensions of the Fondaway Canyon vein systems,” states the 2017 technical report.

Visualize a heat source millions of years ago squeezing boiling-hot magma from west to east through the fissures and faults of the earth’s crust, depositing gold and silver minerals all the way from the westerly range-front, several miles up into the mountains as far as the Hamburger Hill and Silica Ridge zones.

In Nevada this theory led to the discovery of the Pipeline/ South Pipeline deposits which became the Cortez mine, one of three Tier 1 assets that comprise last year’s Nevada Gold Mines’ joint venture between Barrick Gold and Newmont Mining.

Deposits on the shoulders of the hills behind Cortez were mined for decades before drills pierced Pipeline. The geological model used to find Pipeline, the same theory that might apply at Fondaway, is predicated on the notion that larger deposits lie closer to the deep crustal structures, found in the basin bottoms, than in the upper parts of the geological system – like mountain ridges.

Testing that thesis would require tracing the structures that lead to the source. A fence of shallow holes drilled west of South Mouth should reveal a structure fairly quickly, one they can vector into, in the direction of the Pediment zone this would be followed by further drilling into the pediment – looking for the engine driving the whole gold system.

Dixie Comstock, acquired by Getchell as part of the 2019 option agreement with Canarc, is a low-sulfidation, epithermal gold system. The property in Churchill County, NV, 48 miles northeast of Fallon, comprises 26 mining claims on lands administered by the Bureau of Land Management.

Dixie Comstock has an historic resource estimate, and mineralization remains open down-dip and to the east. 146,000 ounces of oxide gold has been identified near surface, showing a gross in-situ value of US$220 million based on a gold price of $1,550/oz). AOTH analysis shows the viability of an open-pit heap leach mine run on diesel power without need to tap into the grid.

Dixie Comstock’s 146,000 ounces of oxide gold seems like a perfect fit for a heap-leach operation that could provide steady cash flow as the other exploration targets are developed.

Getchell Gold’s Buena Vista project is located 37 miles southwest of Winnemucca, in Pershing County, NV. The company has staked along 4 miles of range-front that exhibits multiple types of mineralization throughout the trend.

Notable is a knob-like volcanic formation, just a few hundred meters wide, that sticks out of the pediment. Everything around the silicified, hard piece of geology has eroded. Newmont Mining punched several holes around the structure but the intercepts were less than a gram per tonne so they walked away. There are multiple other occurrences of jasperoid formations along the range front.

This thrust plain is incredibly well-mineralized. In fact, it’s possible to walk along the narrow (3-9 feet) wide) geological feature for several miles, encountering dozens of pits, hand-mined with picks and shovels. Old-time prospectors found gold up to 3 grams per tonne, copper running 3-7% (these days anything above 1% is considered high grade) and silver grades run upwards of 200 g/t!

The intensity of the fluids in this area have not only saturated the thrust plain, but found their way to surface in jasperoid formations, sinters, and even a massive sulfide deposit just to the east of the claims.

There is clearly a big heat engine or multiple heat engines driving the mineralization.

Intuitively, it would make sense to drill the thrust plain for high-grade gold (plus silver and copper) intercepts. But doing so would not provide Getchell with much intelligence as to how the mineralization is structurally controlled.

At Star South, a magnetic survey has been done over a very large gravity anomaly located on the range-front, sitting only a few hundred feet away from the minerals-rich thrust plain.

Drilling a couple of exploratory holes into each of these targets, Star Point and Star South, would be a smart strategy, two targets showing excellent potential through magnetic, gravity and IP surveys. It’s possible the drills could vector into something significant.

In mining exploration, good projects have good upsides. And, so far this year, none surpasses what I’ve seen at Fondaway Canyon, Nevada. As we’ve shown, Fondaway Canyon is a strong contender for building ounces – both underground and open-pit.

Getchell Gold’s Nevada properties are proof positive that the Golden State still has a few secrets left to unlock. 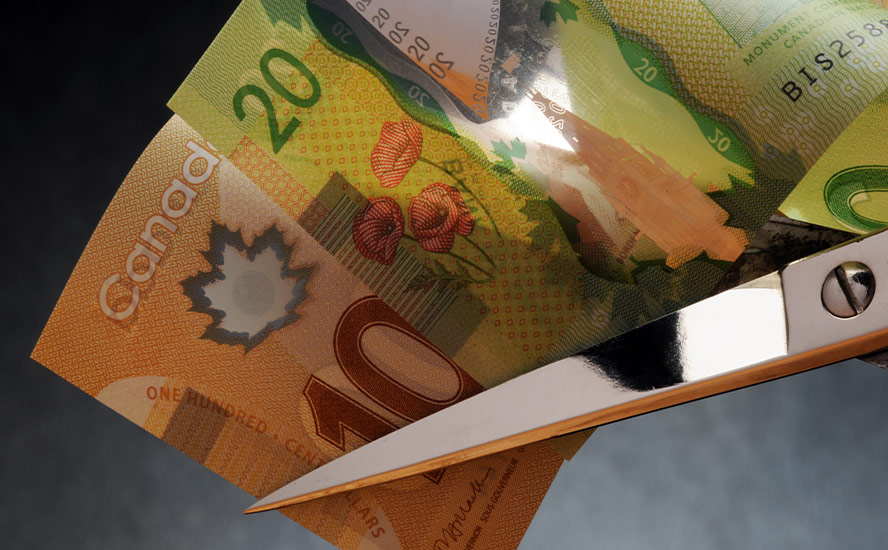