The Most Beautiful Metal

Vanadium is a soft, silvery gray, ductile transition metal and is the 22nd most abundant element in the Earth’s crust. Vanadium in not found by itself, instead it’s most often found in chemically combined forms occurring in about 65 different minerals and has been historically mined as a by-product of other mining operations.

Vanadium is primarily obtained from the minerals vanadinite (Pb5(VO)3Cl) and carnotite (K2(UO2)2VO4·1-3H2O). It is found in magnetite (iron oxide) deposits that are also very rich in the element titanium. It is also found in aluminum ore, rocks with high concentrations of phosphorous-containing minerals, and sandstones that have high uranium content. Vanadium is also recovered from carbon-rich deposits such as coal, oil shale, crude oil, and tar sands. Vanadium can be recycled from mining slag, oil field sludge, fly ash and other waste products.

Vanadium’s symbol, a V, is based on an 8th-century figurine of the Scandinavian goddess of beauty Freyja. The symbol is set against text from a 13th century Icelandic saga. Norsemen called Freyja by another name, Vanadis, which is where vanadium got its name.

Vanadium may be the most beautiful metal of all – once extracted and dissolved in water, various forms of vanadium turn into bright, bold colors.

A sword of Damascus steel was said to be so sharp that it could split a hair dropped on the blade, cut a floating feather in half or split wide open a steel helmet with equal ease. The blades were said to be so flexible they could bend through 90 degrees without breaking.

Most Damascus steel was derived from blocks of ”wootz,” a form of steel produced from the vanadium-rich iron deposits in South India.

A big mystery down thru the ages is what were the properties of wootz that produced such blades – malleable when heated, extraordinarily tough when cooled and able to take on a razors edge and hold it thru the thick of battle.

The Arabs took the steel to Damascus where it was used for many centuries. 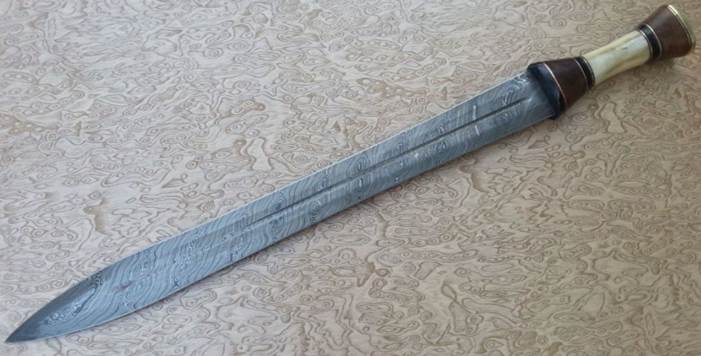 The first time vanadium was discovered was in 1801 by Andrés Manuel del Rio, a Professor of Mineralogy in Mexico City. Rio sent samples, and a brief letter describing his discovery, to the Institute de France in Paris, France, for confirmation and credit. His letter was lost in a shipwreck and the Institute only received his samples which Rio had named erythronium.

In 1830, while analyzing samples of iron from a mine in Sweden, a Swedish chemist, Nils Gabriel Sefstrôm rediscovered vanadium. 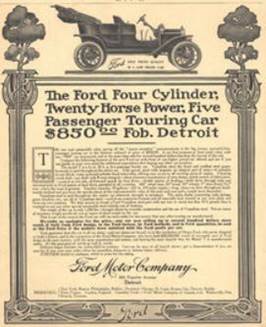 In 1869, pure vanadium was produced by Henry Roscoe at Manchester, England.

Henry Ford was the first to use it on an industrial scale, in the 1908 Model T car chassis.

Vanadium has remarkable characteristics which give it the ability to make things stronger, lighter, more efficient and more powerful. Adding small percentages of it to steel and aluminium creates exceptionally ultra high-strength, super-light and more resilient alloys.

Nearly 80% of the vanadium produced is used to make ferrovanadium or as an additive to steel.

Vanadium-steel and Ferrovanadium (a strong, shock resistant and corrosion resistant alloy of iron containing between 1% and 6% vanadium) alloys are used to make such things as axles, crankshafts and gears for cars, parts of jet engines, springs and cutting tools.

Although other metals can also have similar effects on steel only a small amount of Vanadium is required to dramatically increase its tensile strength, making Vanadium one of the most cost-effective additives in steel alloys.

Less than 1% of vanadium, and as little chromium, makes steel shock resistant and vibration resistant.

Vanadium-titanium alloys have the best strength-to-weight ratio of any engineered material on earth.

Vanadium, being corrosion resistant, is used to make special tubes and pipes for the chemical industry.

Since vanadium does not easily absorb neutrons it has important applications in the nuclear power industry.

A thin layer of vanadium is used to bond titanium to steel.

Vanadium pentoxide (V2O5) is used as a mordant, a material which permanently fixes dyes to fabrics. V2O5 is also used as a catalyst in certain chemical reactions and in the manufacture of ceramics. It can also be mixed with gallium to form superconductive magnets.

Vanadium oxide is used as a pigment for ceramics and glass, as a catalyst and in producing superconducting magnets. 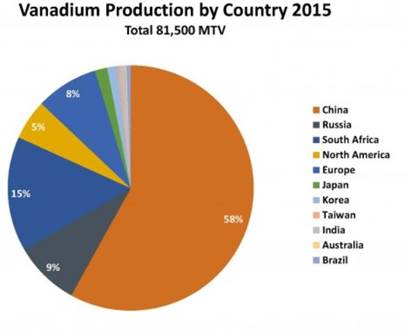 Unlike other commodities, there is no market quote for vanadium.  Vanadium is traded by contract, directly between the producers and consumers – global market prices are set by whatever steel industry customers are willing to pay.

Every sunny afternoon there’s a remarkable amount of the sun’s energy, in the form of solar power, fed into the electricity grid. The problem is that all this new electricity is coming at the wrong time of day. Between noon and 4pm is a trough in power demand. It’s during peak hours of demand in the evening when all this excess energy can be utilized.

An emerging market opportunity is rapidly developing for vanadium pentoxide (V2O5) to be used as the main ingredient, the electrolyte, in the vanadium redox flow battery (VRFB) aka the Vanadium Flow Battery (VFB) or V flow battery. Other vanadium redox battery technologies, such as lithium-vanadium phosphate batteries are also being advanced.

Vanadium is going to become a crucial part of the renewable energy revolution.

“Electrical distribution grids must operate within one simple principle, that energy consumption must be met by energy production instantaneously. Therein lies the problem; solar energy is intermittent, meaning it has variable energy output and is extremely uncertain due to natural conditions. The output can vary on daily, hourly, weekly, and possibly even monthly bases depending on where depending on where the solar panels are set up. This is a serious limitation when integrating solar plants to major grids. Energy storage would be able to solve this problem of energy reliability and security, and it could also be utilized to control to demand and reduce the  load on base load plants that traditionally use fossil fuels. The objective of integrating enery storage technologies is to generate an electricity reserve, which would stabilize the energy market, reduce the need on reserve fossil fuel plants, smooth out short term power quality applications, reduce the requirements of the spinning reserve, provided black start capacity, reduce the vulnerability of renewable, provide greater access to electricity, and finally make the energy produced more affordable for the masses.” Nathaniel Ahlers, Review of Grid-Level Energy Storage Technologies 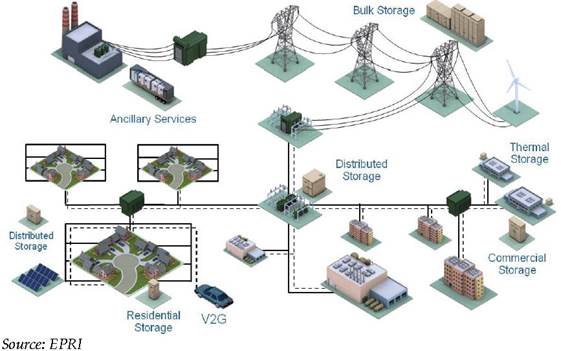 According to the U.S. Energy Storage Monitor, energy storage demand, especially at the business and utility scales, will increase ten times in just the next five years.

The Energy Storage Association states that corporate investments in energy storage reached $660 million in the third quarter of 2016.

Fact – A lack of energy storage is the main factor limiting the spread of renewable energy.

Fact – When we can create, and easily access as required huge stores of energy, we will be free from much of our dependence on fossil fuels. 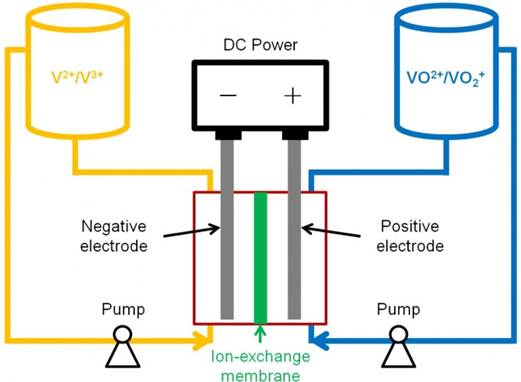 “V-flow batteries are fully containerized, nonflammable, compact, reusable over semi-infinite cycles, discharge 100% of the stored energy and do not degrade for more than 20 years. Unlike solid batteries, like lithium-ion or lead-acid, that begin degrading after a couple of years, V-flow batteries are fully reusable over semi-infinite cycles and do not degrade, giving them a very, very long life.” James Conca, The Energy Storage Breakthrough We’ve Needed

Presently, the largest installed V-flow battery in the U.S. is in Washington State at the Snohomish County Public Utility District’s Everett Substation. This vanadium battery can keep the lights on in 1,000 homes for eight hours.

“VRFBs have emerged as a promising solution for grid services because of their long lifecycle potential and high energy capacity, which can provide extended discharge times. Additionally, given the ability to scale power and energy of a system independently, VRFB technology may be a long-term solution for off-grid power systems and micro-grids. In particular, these systems could be used to support residential, community, military, and commercial end-users, and to fulfill remote-energy-access needs of rural areas in developing countries.

Estimates on vanadium requirements for VRFB vary among producers, with an average of approximately 8 Kg of high purity V2O5 per KWh. Currently, there are few vanadium producers able to produce high purity V2O5 and products show significant differences in purity and trace element levels…

Considering the potential size of the grid energy storage market, even a slight increase in VRFB demand would mean significant growth in V2O5 consumption for this end-user product. For example, it is estimated that the vanadium consumption in the battery energy storage industry could rise 3100% by 2025, to 31 kt V.

Currently, 55% of global V2O5 production occurs in China, followed by 17% in South Africa, 8% in Russia, and 4% each in the USA and Austria.” Canadian Nation Research Council (CNRC) report

There is no primary vanadium production in Canada or the U.S.

Vanadium, and the fact VFB’s are the basis for a more efficient, reliable, and cleaner electrical energy market, needs to be on your radar screen.

Richard lives with his family on a 160 acre ranch in northern British Columbia. He invests in the resource and biotechnology/pharmaceutical sectors and is the owner of aheadoftheherd.com.

Richard Mills makes no guarantee, representation or warranty and accepts no responsibility or liability as to its accuracy or completeness. Expressions of opinion are those of Richard Mills only and are subject to change without notice.

Richard Mills assumes no warranty, liability or guarantee for the current relevance, correctness or completeness of any information provided within this Report and will not be held liable for the consequence of reliance upon any opinion or statement contained herein or any omission.