SURG finds breccia icing to put on its porphyry cake

It could be the icing on the cake that gives Surge Copper (TSX-V:SURG) the tonnage it needs to interest a suitor in its Ootsa copper-gold play, situated about 90 minutes drive from Smithers, BC.

SURG released new assays Wednesday from Holes S-18 212 and 214, which are the first results from a high-grade breccia zone the company discovered earlier this summer as part of its 2018 drill program.

Exploration was halted due to a large wildfire burning in the area that has caused road closures and evacuations, but Ebert said the situation is improving. The 100,000-hectare Nadina Lake fire has been contained so the drill crew and geologists could be back working within the week.

Meanwhile Hole 212, from which assays were published Aug. 9, also returned excellent results, with a 22m intersection grading 0.5% copper equivalent including 6m of 1.2% Cu Eq. Holes 212 and 214 are in the high-grade breccia zone we introduced, along with a new porphyry target, in our Aug. 18 update on SURG, which also described our recent site visit. 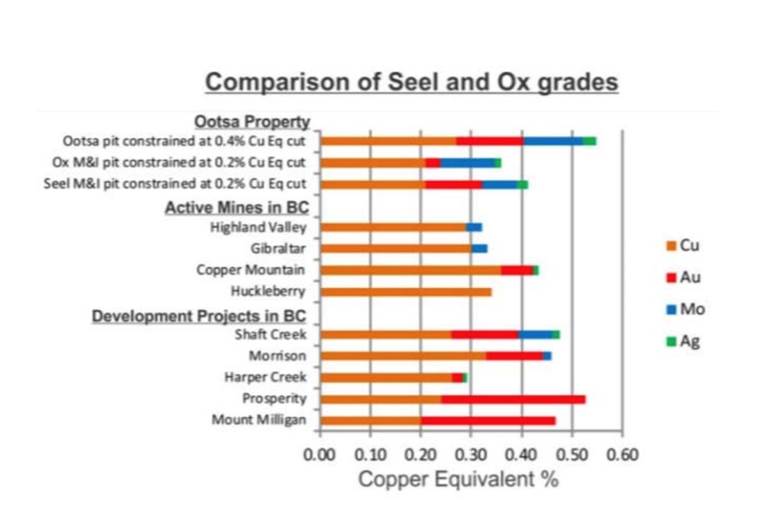 In a phone call with Ahead of the Herd, CEO Shane Ebert said he was surprised at the high zinc numbers. “I don’t know if that’s going to be anything we can use down the road but it sure shows there’s a big strong hydrothermal system going through,” said Ebert, who is also the chief geologist on site.

The nearby Huckleberry Mine isn’t set up to process lead and zinc (it runs a copper/ precious metals flotation circuit and a molybdenum circuit) but Ebert said similar mineralization found on site showed good recoveries of copper, gold and silver.

The current PEA has the potential for a 12-year mine that would produce 324 million pounds of copper, 185,000 ounces of gold, 15.8 million pounds molybdenum and 3 million ounces of silver. The report specifies a contract mining and toll milling scenario using Imperial Metals’ mill – where the Ootsa operation would produce at 20,000 tonnes a day, around the same as Huckleberry before it shut down. Historical exploration at Ootsa has seen 144,000 meters drilled, with over 350 holes punched into the low-lying topography. Three deposits – Ox, East Seel and West Seel – have been discovered.

Surge Copper’s 2018 exploration plan involves exploring around the edges of the East Seel deposit which has the highest grades among the three Ootsa deposits.

The goal is to add another 20 to 24 million tonnes to the current 224 million tonnes of measured and indicated resources in the ground, which would enable Surge to comfortably run a stand-alone operation ie. a mine that could function without any involvement from neighboring Huckleberry Mine, owned by Imperial Metals but currently on care and maintenance.

Read our Surge Copper: 3 great scenarios for an explanation of the company’s options: partnering with Imperial Metals in operating a new mine; going it alone by growing the resource to a point where it doesn’t need Imperial, likely with third-party backing; or getting bought out by a major or mid-tier mining company.

Ebert said the results so far from the 3,000m program are encouraging:

This new [breccia] zone, we maybe need a bit more work to figure out how it’s going to hold together size-wise and along strike but it’s pretty encouraging to be hitting these kind of numbers on a new discovery, it’s completely covered [with overburden]. There’s very little to go on apart from geophysics and drilling holes.

He also noted there are other examples of smaller higher grade operations adding to a larger mine’s mill feed to smooth out grade, naming Imperial’s Mount Polley Mine as an example.

Ebert wants to drill another six to eight holes to see if “the zone has legs.”

While the assays from Holes 212 and 214 show some good copper-equivalent grades, what is really exciting for Surge Copper is Holes 216 and 217, both of which are targeting a new porphyry – which typically host large sources of copper ore. Yet-to-be-assayed core samples are “showing potential for porphyry style quartz-chalcopyrite-molybdenite mineralization located between the East Seeldeposit and the historic Damascus high grade silver vein,” reads the Aug. 9 press release. A new porphyry would be significant for Surge Copper because it would aid in its plan to add another 20 to 24 million tonnes of mineralization at Ootsa, thus improving the economics of the project outlined in the PEA.

Ebert said SURG’s drilling priority in what’s left of the season will be focused on the porphyry potential of Holes 216 and 217. “The reason for that is a porphyry is a much bigger, easier to define tonnage zone, than a breccia target. The breccia has potential for grade but the porphyry really would be an easy thing to build the tonnage we need quite quickly.”

While the drills haven’t hit the porphyry yet, Ebert believes they’re close – judging from the indications of copper-moly veinlets and the geophysics showing elevated magnetics, chargeability and low resistivity. 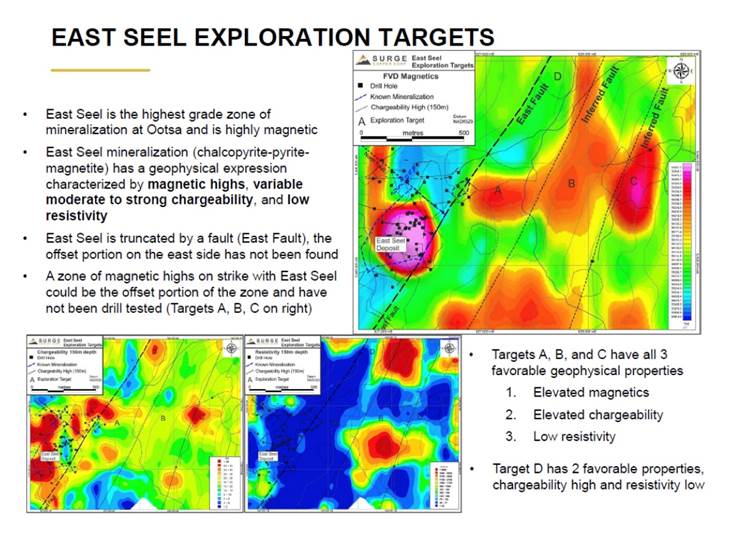 “We’ve hit little bits of the intrusion that host these but we haven’t drilled into the main intrusive body yet,” he said. “We have a nice magnetic target and coincident chargeability target that’s untested in proximity to these holes. That would probably be the first area we’d want to go in and test.” Assays on Holes 216 and 217 are pending.

Ebert’s next call after talking to us was to discuss the grades and volumes of mineralization found so far at Ootsa with Randall Thompson, who in July was named VP Operations at Imperial Metals. Thompson, who held various roles at Imperial’s Huckleberry Mine and was instrumental in implementation of the Huckleberry Main Zone Optimization plan which extended the mine life, and the permitting and construction of TMF3 (the second tailings storage facility on the site)., is also on SURG’s board of directors. This is significant, since the relationship between the two companies could be key in whether Imperial decides to partner with SURG or even take them over.

With 2018’s drilling season still in full swing, Surge Copper has come up with two discoveries: a high-grade breccia zone whose high grade ore could be mixed with the porphyry mineralization to level out grade, and a potential new copper porphyry, both of which could add to the resource estimate at Ootsa and the economics of the PEA. We don’t yet have the “fire” of a porphyry, but we have lots of “smoke”. Another couple of drill holes could pierce the porphyritic intrusion and SURG could be off to the races delineating bulk tonnage.

The second point to make is that things are happening at the Huckleberry Mine. Vehicles have been spotted coming and going from the mine, likely doing exploration. This can’t be confirmed but it looks as though Imperial may be working on a drill program. If that is the case, the timing for SURG couldn’t be better in trying to make an arrangement with Imperial to re-start Huckleberry possibly using mill feed from Ootsa. According to Imperial, exploration in 2016 was conducted at its Whiting Creek prospect. Three drill holes intersected copper and moly mineralization, with two holes near surface and one at a depth of about 185 meters.

A technical report from Imperial Metals on the Huckleberry Mine’s Main Zone shows an M&I resource of 180.7 million tonnes with grades of 0.315% copper. The mine has approximately five more years of reserves. That’s not a lot. Does Imperial keep exploring Whiting Creek, or make a deal with Surge Copper to extend the minelife? Of course it’s too early to say, but the possibility is intriguing.

I’m anticipating the results from the next two drill holes that can tell us the grades from the prospective porphyry, and I am also keeping an ear to the ground as to what Imperial is planning on doing with Huckleberry.

For all these reasons I have SURG on my radar and own shares.

Richard owns shares of Surge Copper (TSX.V:SURG) is an advertiser on his site aheadoftheherd.com