Skyharbour Resources Ltd. (TSX-V:SYH) (OTCQB: SYHBF) (Frankfurt:SC1P)delivered some exciting results to the market with the announcement earlier this week of high-grade uranium intersections at its Moore project in Saskatchewan’s Athabasca Basin.

The Vancouver-based company has just completed its fall drill program focusing on the Maverick Zone of its Moore property, located about 15 km east of Denison Mines’ Wheeler River project. The primary objective of the 3,800m program was to investigate the potential for uranium mineralization at depth, in the basement rocks.

Why is that important? It’s known from previous drilling at the Maverick Zone that the bulk of the mineralization is in the sedimentary sandstone and the unconformity – the point where the sandstone meets the underlying basement rocks. What was not known, was the potential for high grade uranium in the basement rocks. Skyharbour wanted to solve that mystery because most of the highest-grade deposits discovered in the Athabasca Basin in recent years have been found in the basements. These include NexGen’s Arrow, Fission’s Triple R and Denison’s Gryphon deposits.

And the answer was… yes. Drilling at the western end of the Maverick Zone, SYH pulled up a 15.2m intercept containing 0.56% triuranium octoxide (U3O8) – including 3.11% U3O8 over 1.8m. More importantly though, the intercept – one of the broadest to date – occurred between 264.5m and 279.7m downhole, and most of the zone was below the unconformity in the basement rocks.

“The big takeaway is hitting the bulk of that 15.2m of mineralization in the basement rock. Now we know the basement has the potential to host more high-grade uranium, and we can continue to drill to find bigger, higher-grade feeder zones.”

By feeder zones, Trimble is referring to what could be the source of the uranium that precipitated out from fluids millions of years ago and pushed upward, into the basement rocks, the unconformity and the sandstone.

A few more highlights from the program:

Skyharbour will take what it’s learned from its fall 2018 drill program into a new 3,000m program planned for early 2019. The focus will include more exploratory drilling into the basement rocks with the goal of adding high-grade uranium mineralization that can be plugged into a maiden resource expected to be published sometime next year.

Recapping what has been done so far at Moore:

In partner news, Orano is planning to drill 4,850m in 2019 as part of a $2.2 million exploration program at Skyharbour’s Preston property. The two companies previously signed an earn-in agreement whereby Orano (formerly Areva) must spend C$8 million exploring the property over six years, in order to earn up to 70% of the project. Orano has identified two priority targets, JL and FSA.

With this program, financed by partner money, Orano looks to be well ahead of their earn-in targets and will nicely complement SYH’s drill program at Moore, while adding to the news flow. A recent $600,000 private placement means Skyharbour is fully cashed up for its next phase of exploration at Moore. 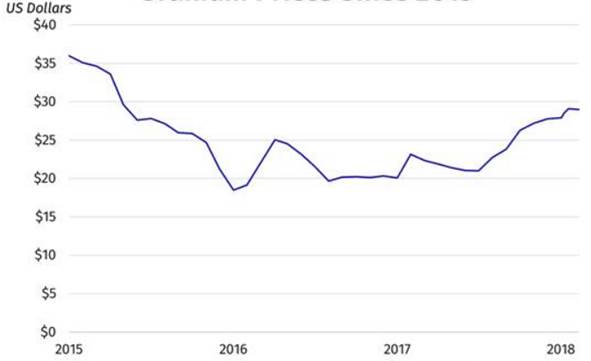 Ahead of the Herd also took the opportunity to get Trimble’s thoughts on the uranium market, which still appears to be in the early stages of a bull market. The spot price climbed to just under $30 earlier this month, and is up over 25% since the start of the year.

A recent report from BMO predicts the price will gradually rise as inventories are reduced; the report targets $55 a pound in 2023. The spot price is carefully watched by retail investors but nuclear utilities mostly buy on long-term contracts.

On the supply side, Trimble pointed to production cuts at KazAtomProm, mine closures – Cameco’s McArthur River/ Key River and Rabbit Lake – and big mines like Ranger in Australia, and Rossing in Africa, running out of ore.

The Ranger mine operated by Rio Tinto will stop operating in 2021 and is slated for closure in 2026. Paladin Energy has cancelled a planned expansion and has shuttered its aging Langer Heinrich open-pit mine in Namibia.

Since 2016, between 30 and 33 million pounds of mined uranium has been curtailed, representing about 23% of global production. 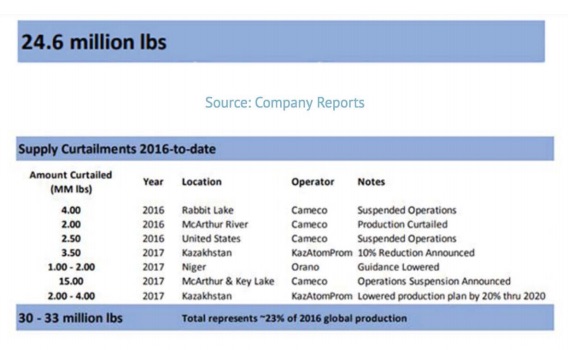 Trimble notes it’s a win-win situation for the market right now because as uranium contracts with nuclear utilities roll off in the next three to four years, producers won’t be able to produce at current low prices – negotiated a few years ago pre-Fukushima – meaning either the price goes up or those producers shut mines. If the latter happens, supply will be restricted and the price will rise.

Also feeding into the supply picture, and what’s really moved the spot price, says Trimble, are several new uranium funds and holding companies that have emerged over the past 10 months. Seeing an imbalance in the market, their rationale is to buy uranium on the spot market, store it, and sell it later to utilities when the price goes up. 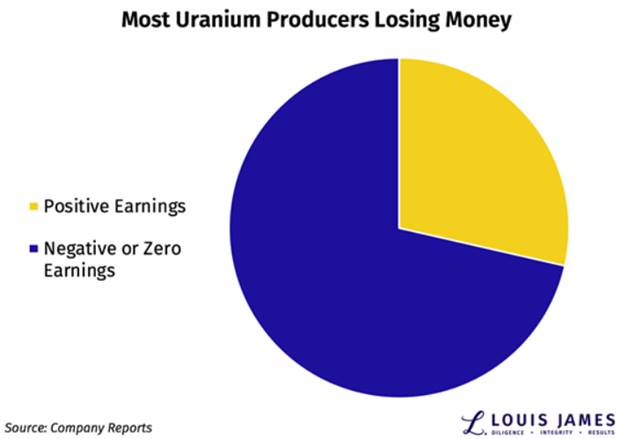 Adding to the spot market buying frenzy is Cameco, which plans to purchase 11 to 15 million pounds to fulfill contracts in the new year – having run out of inventory and stockpiles. Trimble sees this as the most immediate near-term driver of the spot price.

On the demand side is the usual strong pull towards nuclear energy, particularly in Asia. China has the most reactors in the pipeline including 43 operating, 15 under construction and 179 planned or proposed. Globally there are 453 operating nuclear reactors and 55 new reactors under construction. Japan, which shut down all its reactors following the 2011 earthquake/ tsunami, now has nine reactors back online, up from just three last year.

Nuclear consultant UxC predicts a shortage of uranium in 2018, when full-year results are tallied: only 135 million pounds of U3O8 due to recent closures and project deferrals, versus 192 million pounds demanded. 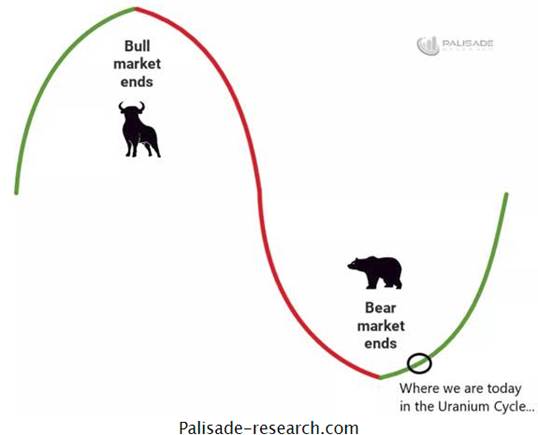 What’s on your radar screen? Uranium and Skyharbour Res. (TSX.V:SYH) are on mine.

Richard owns shares of Skyharbour Resources (TSX.V:SYH). SYH is an advertiser on his site aheadoftheherd.com