Silver prices continue to gain this week, rising off the biggest monthly rally since 1979, amid a slew of factors that are pushing precious metals higher.

As of this writing, silver was nudging $27 an ounce, adding more momentum to its steep climb above $20, which began around the third week of July.

Silver last month gained an astonishing 35%, as investors sought shelter from pandemic turmoil and low or negative interest rates, while industrial demand for the metal recovered in some parts of the world. Its July performance, seen in the hockey stick-shaped graph below, makes silver the darling of the commodities complex. 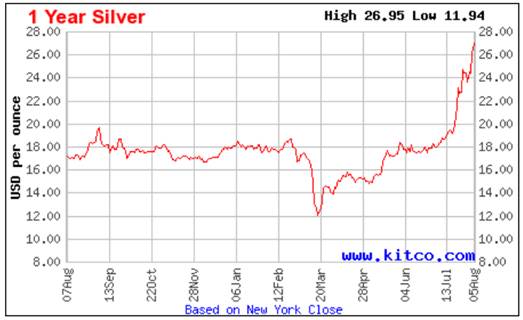 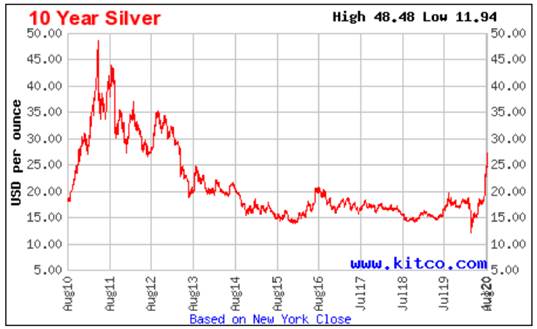 The story behind its success – we were among the first to predict the potential for a silver breakout approaching that of 2011 – is one of two demands, reflecting silver’s role as both a monetary and an industrial metal. There is also a supply narrative to silver’s rise, with respect to Covid-related output reductions at silver mines in Peru and Mexico, from which 40% of the world’s silver is produced.

Most of the investment demand is flowing into silver ETFs. As of June 30, global ETF holdings hit a new record of 945 million ounces, roughly 14 months of mine supply, according to The Silver Institute. ETF growth in the first half of 197Moz easily beat the highest annual inflow of 149Moz set in 2009.

By far the largest silver ETF is iShares Silver Trust (SLV). SLV owns nearly half of all the silver controlled by the world’s silver funds.

“SLV is getting 10 times more demand for silver than is available, in a normal year,” says Eric Sprott, the billionaire resource investor and self-proclaimed silver bug.

The amount of silver being demanded by silver ETFs (a silver ETF is backed by physical silver), is far larger than the physical silver market, which is actually quite small. The disconnect is driving silver prices higher.

Silver’s industrial uses include solar panels, electronics and the automotive industry. The solar power industry currently accounts for 13% of silver’s industrial demand. More and more silver will be demanded for its use in solar photovoltaic cells, as countries move further towards adopting renewable energy sources. Around 20 grams of silver are required to build a solar panel.

According to a recent report by CRU Consulting, the amount of electricity generated by solar power is expected to increase by 1,053 terawatt hours (TWh) by 2025, which is nearly double what was produced in 2019.

All of that solar will be a major boon for silver.

CRU expects PV manufacturers to consume 888 million ounces of silver between now and 2030. That’s 51.5 million oz more than the combined output from all the world’s silver mines in 2019.

5G technology is set to become another big new driver of silver demand.

According to the Silver Institute, The electronic components that enable 5G technology will rely strongly on silver to make the global 5G platform perform seamlessly. In a future 5G connected world, silver will be a necessary component in almost all aspects of this technology, resulting in yet another end-use for silver in an already vast and versatile demand portfolio.

The Silver Institute expects silver demanded by 5G to more than double, from its current ~7.5 million ounces, to around 16Moz by 2025 and as much as 23Moz by 2030, which would represent a 206% increase from current levels.

Although weak consumer confidence because of the pandemic has crimped demand for some of silver’s end uses, including autos and consumer electronics, governments’ recently announced infrastructure investment programs are expected to lift silver industrial demand.

On the supply side, among a second wave of covid-19 shutdowns (the first wave was in March) are some of the biggest producing silver mines in the world. Peru, where at least 1,000 mineworkers have tested positive for the virus, is considered most at risk of output disruptions, especially considering most of the mines are underground where social distancing is difficult.

In early July, mining companies in Peru were forced to keep operations suspended, and halt new ones, as the number of coronavirus cases topped 300,000. (it now has 439,890 cases, according to Worldometer) Among the companies affected are Trevali and its Santander silver mine, Hochschild Mining’s Inmaculada, and Fortuna Silver Mines’ Caylloma.

In Mexico, the world’s largest silver producer, a surge of covid-19 cases in March led to the suspension of non-essential services. Among the companies forced to temporarily halt their operations, were Newmont Mining Argonaut Gold, Pan American Silver, Sierra Metals, Excellon Resources and Alamos Gold.

The Silver Institute is predicting a 13% decline in silver production from Latin America this year – equivalent to 67 million fewer ounces – with global supply set to fall 7.2%. All told, the silver market will be in deficit for the first time in five years, according to SI.

The gold-silver ratio is the amount of silver one can buy with an ounce of gold. Simply divide the current gold price by the price of silver.

We have seen the gold-silver ratio decline from a multi-decade high of 127:1 in March, to the current 75:1, meaning it takes 75 oz of silver to buy 1 oz of gold. This is still high by historical standards, meaning silver remains undervalued compared to gold, and will likely move higher, towards the average historical ratio of 55:1.

We have the same bullish indicators for silver as for gold, in terms of safe-haven demand inciting investors to park their money in silver bullion, silver ETFs or silver mining stocks, and the fact that silver is not subject to inflation like paper currencies.

Its hundreds of industrial applications make silver very responsive to the condition of the global economy. Improved economic conditions resulting from countries successfully reopening from coronavirus lockdowns, will be great for silver explorers, and their investors, who know the best leverage against rising metals prices is to own an early-stage junior with a sizeable and scalable deposit in a mining-friendly jurisdiction.

Silver supply is sensitive to mine production cuts – as we have seen recently with coronavirus-related stoppages. However, silver is also vulnerable to supply slippage, more so than gold, because there are relatively few pure-play silver mines.

Only around 30% of annual supply comes from primary silver mines. Over two-thirds is sourced from polymetallic ore deposits, including lead/zinc operations and copper mines.

To gain maximum exposure to silver’s bull market, we suggest investing in exploration companies targeting silver; this minimizes the risk of other co-product metals diluting the deposit and dragging down its value.

Silver Dollar Resources (CSE:SLV) has a tightly held share structure that includes ownership by acclaimed resource investor Eric Sprott. SLV has started field work at one of two prospects in the famous Red Lake District of northwestern Ontario, where a number of gold juniors including 2019 belle of the ball Great Bear Resources (TSX-V:GBR), are proving up gold ounces in a new “Red Lake 2.0” area play.

Silver Dollar is also poised to activate a letter of intent (LOI) with First Majestic Silver Corp. (TSX:FR) for the La Joya silver-copper-gold property in Mexico.

Under the LOI, Silver Dollar would acquire up to a 100% interest in First Majestic’s La Joya Silver Project, located in the State of Durango in the Mexican Silver Belt.

To acquire an 80% interest in La Joya, Silver Dollar will pay First Majestic $1.3 million in cash over four years, issue 19.9% of its shares, incur $1 million in exploration expenditures within five years, and grant FR a 2% NSR royalty. If Silver Dollar spends the million dollars within three years, First Majestic will waive nearly half, or $600,000, of the cash option payments.

According to Silver Dollar, the exploration potential at La Joya is considered excellent, given that it hosts the La Joya mineralized trend as well as the Santo Nino and Coloradito deposits. The Ag-Cu-Au property consists of 15 mineral concessions totaling 4,646 hectares.

Mountain Boy Minerals (TSX-V:MTB) is active in northwestern British Columbia’s Golden Triangle, in my opinion, one of the best jurisdictions for base and precious metals exploration, for companies like MTB that are close to power, highway and port facilities.

Mountain Boy has assembled a large land position centered around its flagship American Creek project and zeroed in on three targets for its summer drill program. Work this year on the other projects – BA, Surprise Creek and Southmore – is intended to set them up for larger programs next year, perhaps funded by joint venture partners.

In 2006, Mountain Boy conducted a 19-hole drill campaign around the old Mountain Boy silver mine that lies at the center of American Creek. A small underground drill was used. The average hole length was 47 meters – barely scratching the surface. The focal point was the aptly named High Grade Vein, which was the heart of the historic mining. Six holes in that vein intercepted more than a kilogram of silver over at least a meter, with the highlight being hole 2006-10 which hit 5,258 g/t over 5.18 meters. (5 kg is 160 troy ounces)

CEO Lawrence Roulston and his team are going for high-grade in the Golden Triangle Although it’s still early for Mountain Boy, a discovery hole on any of these targets could light American Creek up like a Christmas tree. We expect a slow ramp-up in the first phase and growing interest once the drills start turning in late summer to fall.

MTB & SLV are paid advertisers on his site aheadoftheherd.com

In early July Mountain Boy completed a $2 million financing, of which Eric Sprott took 4 million units ($1,000,000), giving him an 8.9% (non-diluted) ownership position in the company. Unit holders receive one common share and half a warrant, exercise-able at $0.40 for two years