A new copper and battery metals play in Saskatchewan is out of the gate with an oversubscribed private placement of $1.7 million.

Hudbay Minerals owns three mines – 777, Lalor and Reed – and a processing facility at Snow Lake. The mines produce mostly copper and zinc, plus smaller amounts of gold and silver.

According to a press release issued Thursday, Rockridge has received approval from the TSX Venture Exchange for its option agreement with Eagle Plains, allowing the stock to resume trading, having been halted during the private placement.

Under the terms of the agreement, Rockridge can acquire the Knife Lake project by incurring exploration expenditures of C$3.25 million over four years, along with issuing 5,250,000 Rockridge shares and paying a total of $150,000 in cash.

In connection with the option agreement, Rockridge completed a non-brokered private placement, raising $1.694 million through 8,470,000 units sold at $0.20. Each unit consists of one common share and one warrant, giving each shareholder the right to buy another common share at $0.35, exercisable for five years. Proceeds from the oversubscribed private placement will go towards funding exploration at Knife Lake plus general working capital.

Of interest to current and potential investors is Rockridge’s tightly held share structure. Out of 21 million issued and outstanding shares, about 90% are held by insiders, management and close associates, leaving only 2 million shares in the public float. The company currently has an enterprise value of roughly $3.5 million – which is low considering the potential of the project.

Steady copper supply is dependent on a few giant deposits that were discovered many generations ago and have been mined for decades – the median age for 2017’s top ten copper mines in terms of production is 95 years.

The Knife Lake Copper VMS project is an advanced-stage copper, zinc and cobalt exploration property. Over 400 diamond drill holes have been completed. Characterized as a “remobilized VMS deposit,” Knife Lake has about a 15m-thick mineralized zone containing copper, silver, zinc and cobalt. It dips 30 to 45 degrees eastward over a 4,500m-long strike.

The property has been extensively explored, with about $20 million spent so far. The first work was carried out between 1969 and 1973, including airborne geophysical surveys and soil sampling. The 1969 discovery hole returned 2.37% copper over 4.48m, including 3.5% over 2.5m. These days, anything over 1% is considered high-grade copper.

Exploration picked up again in the 1990s, but ceased when metals prices dropped. A company called Leader Mining punched in 350 holes between 1996 and 2001, and published a resource estimate in 1998, consisting of 20.3 million tonnes grading 0.6% copper, 0.1 g/t gold, 3.0 g/t silver, 0.06% cobalt and 0.11% zinc. Within this shallow resource is a higher-grade zone of 11 million tonnes grading 0.75% copper in addition to other metal credits (The resource estimates are historical in nature and are not NI 43-101 compliant). The property is estimated to contain between 300 and 350 million pounds of copper-equivalent.

“What’s exciting about it is it’s open along strike and at depth, it’s never been drilled deeper than about 100m, and it’s a big property, 85,000 hectares,” said Rockridge President and CEO Jordan Trimble, adding that VMS deposits typically occur in clusters. “So there’s strong potential to go and find additional deposits and zones of high-grade mineralization in the region.”

Last year, the mining leases on Knife Lake were allowed to lapse and Eagle Plains came in and re-staked the property. Trimble believes it’s the first time that’s ever happened in Saskatchewan which presented a very unique opportunity to acquire an advanced stage exploration project at pennies on the dollar. 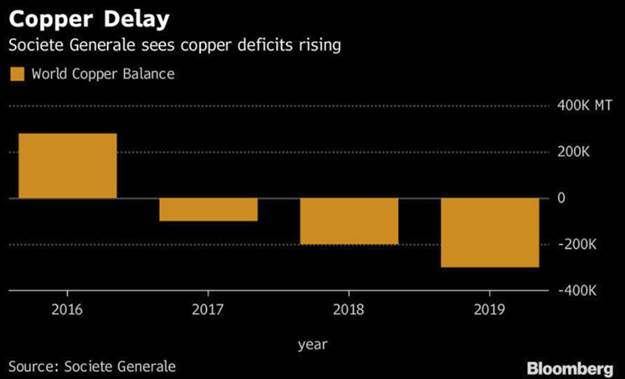 Flush with over $2 million in the treasury, Rockridge is planning a $700,000 drill program to begin in February or March 2019. Trimble said the focus of the program will be confirmation drilling in the deposit area as well as expansion drilling and some exploratory holes. This will provide ample news flow in the first half of the new year.

The option agreement comes at the perfect time to be exploring for copper in Canada, one of the safest and mining-friendly environments in the world.

Demand for the “red metal” needed for construction (copper wiring), communications and auto manufacturing, is now part of the global transportation system shift from reliance on the internal combustion engine to electric vehicles. Copper is an essential component of EVs. That means copper demand is going to soar even higher than it already is.

According to a study by Bloomberg, a deficit in copper is likely to emerge around the year 2020. Despite the fact that the current project pipeline will add new supply in the short term,  the long-term trends show a less rosy picture for the availability of copper. The problem lies in the robust demand growth for copper. According to Bloomberg, demand for copper is growing at 3.7% per year, and is therefore significantly higher than the downwardly revised 3.2% supply growth. This year’s added supply of copper from new projects will peak, and will fall away dramatically as we move towards 2020. Bloomberg still sees the possibility of expanded production from existing mines, but after 2020 there really is no more flexibility. Copper deficits will emerge in 2020, according to Bloomberg 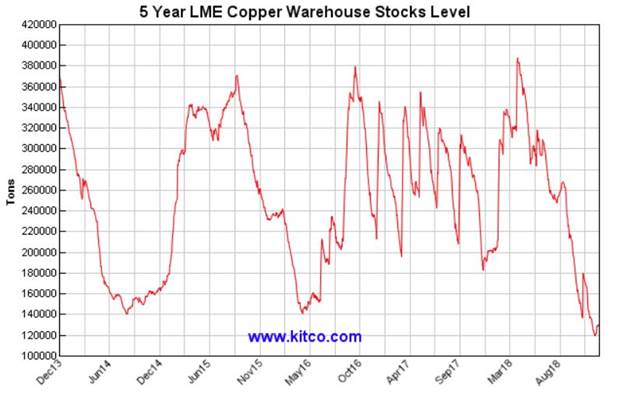 Second, we are on the cusp of a major change in the copper market, where supply is not going to be able to keep up with demand. A supply deficit is expected as soon as 2020. If supply can’t meet demand that means one thing: higher prices. It also means that governments (and companies) will be scrambling to get their hands on new copper properties to meet the demand. Nothing less than their economic growth is at stake. Without copper, construction and the automotive industries would grind to a halt. Maintaining a smooth supply chain is critical to growth.

For all these reasons I’ve got copper, and Rockridge Res. (TSX.V:ROCK) on my radar screen.

For more on bullish copper trends, read our Copper fundamentals still solid. Another must read is this excellent piece from mining.com. These charts show just why copper price fundamentals are so strong.

Richard owns shares of Rockridge Resources (TSX-V:ROCK). ROCK is an advertiser on his site aheadoftheherd.com

Still life with silver bars on a wooden background

Investors beat central banks and jewelry, as having the most influence on gold prices

If you remember the ’60s, you weren’t there