The results from the last six holes of a 12-hole diamond drilling program have come back to Rockridge Resources (TSX-V:ROCK), and they show excellent copper grades from its Knife Lake VMS deposit in Saskatchewan.

The 1,053-meter drill program, completed in spring 2019, had two objectives: to confirm the tenor of mineralization (the percentage of metals found in the sulfides) reported by previous operators, and to expand known zones of mineralization.

Rockridge believes Knife Lake could be the remobilized (moved by granitic rocks) portion of a larger VMS (volcanogenic massive sulfide) deposit, based on the mineralogy, mineral textures and metal ratios found within the deposit.

It is testing this thesis by drilling deeper below the deposit and around it.

The 85,196-hectare property is about 50 kilometers northwest of Sandy Bay, Saskatchewan and within the Flin Flon-Snow Lake mining district, a prolific greenstone belt. Since its initial discovery in 1915, the Flin Flon mining camp has produced over 170 million tons of sulfide ore from 31 VMS deposits, worth over $25 billion.

Historically explored with over 400 diamond drill holes, Knife Lake is a VMS deposit with a 15m-thick mineralized zone containing copper, gold, silver, zinc and cobalt. This past winter’s drill program was the first exploration done since 2001. 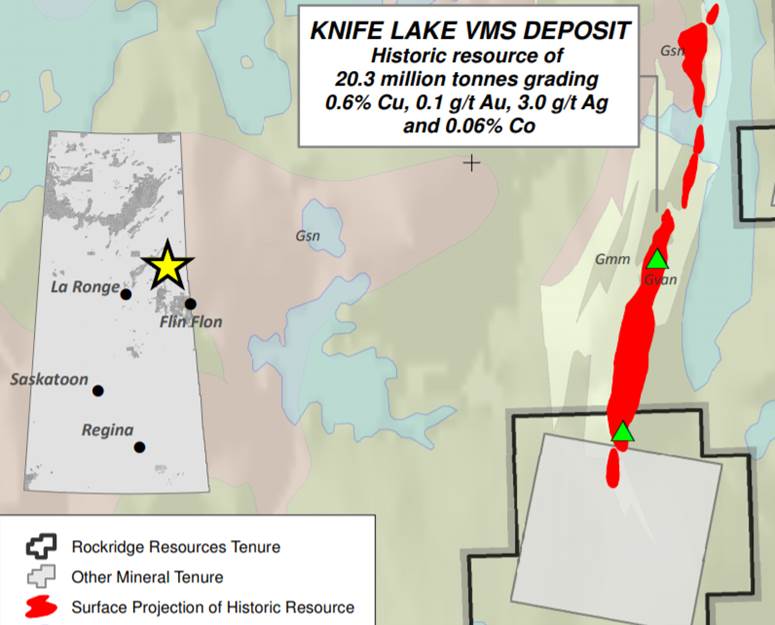 All five holes reported traces of the rare metals indium and gallium. Indium is used to make transistors and other electrical components. Silver-blue-colored gallium is found in some medical thermometers as a substitute for mercury, in semiconductors and to make mirrors.

The remaining four holes – KF1009-12 – were punched in at the southern end of the deposit, in fresh ground.

“The Knife Lake property package is highly prospective for new discoveries using modern exploration techniques and methods given the lack of recent field work,” said Rockridge’s CEO, Grant Ewing, in the news release. “The known deposit is thought to be a remobilized portion of a presumably larger primary VMS deposit and there is excellent potential for deposit expansion at depth which we plan to test in future programs. Furthermore, there are several high quality targets to test on the expansive landholding, and there have yet to be satellite deposits discovered in the vicinity as VMS systems often host clusters or stacked deposits.”

Knife Lake is currently owned by Eagle Plains Resources (TSX-V:EPL). Under an option agreement, Rockridge can acquire the project by incurring exploration expenditures of C$2.5 million over three years, along with issuing 3,250,000 million shares.

The company plans to incorporate the extremely positive results from it winter drill program into an NI 43-101-compliant resource estimate for Knife Lake. After that, a summer exploration program is expected to be announced.

Both events should provide good news fodder and stock catalysts for ROCK over the next several weeks.

Richard does not own shares of Rockridge Resources (TSX.V:ROCK).