ROCK ready to roll in Saskatchewan

Drills are turning at the Knife Lake Project in Saskatchewan, where Rockridge Resources (TSX-V:ROCK) hopes to meld a resource estimate onto the advanced exploration project rich in volcanogenic massive sulfides (VMS).

Knife Lake is currently owned by Eagle Plains Resources (TSX-V:EPL). Under an option agreement, Rockridge can acquire the project by incurring exploration expenditures of C$3.25 million over four years, along with issuing 5,250,000 Rockridge shares and paying $150,000 in cash. 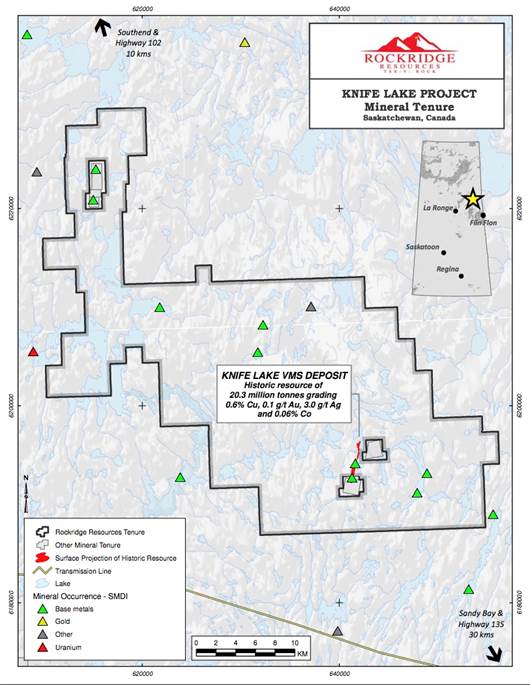 Historically explored with over 400 diamond drill holes, Knife Lake is a VMS deposit with a 15m-thick mineralized zone containing copper, silver, zinc and cobalt. This spring’s drill program will be the first exploration done since 2001.

Rockridge is planning to drill 1,000 meters in eight to 10 diamond drill holes. The objectives are to confirm the tenors (the percentage of metals found in the sulfides) of mineralization reported by previous operators at Knife Lake, and to expand the known zones. The ultimate goal is to come up with an NI 43-101-compliant resource estimate.

“The commencement of drilling is a significant milestone for Rockridge as we look to position the Company as a go-to copper and base metal exploration and development company in Canada,” Rockridge’s President and CEO, Jordan Trimble, said in the news release. He added:

“The historical Knife Lake Deposit returned some notable drill results and there is still robust discovery potential around it and regionally. This inaugural drill program represents the first meaningful exploration carried out on the project in over sixteen years as we execute on our strategy of going back into overlooked projects in favourable jurisdictions with modern exploration techniques and methodologies to make new discoveries.”