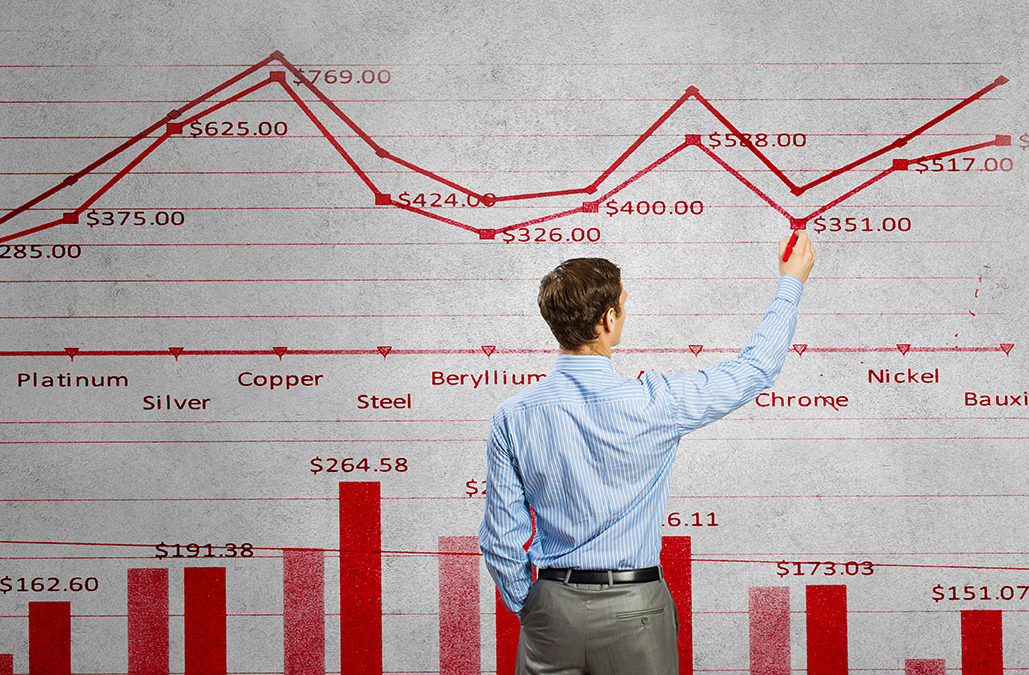 In mineral exploration, assay results are where the rubber hits the road. A junior resource company can publish all the studies it likes on their project(s),  geophysical and geochemical reports indicating there are minerals within or underneath the ground cover, loads of soil samples and pretty graphs, etc., but it is not until the targets are drilled, when the market really starts paying attention.

Drills aren’t called the “truth machine” for nothing. The results they come up with don’t lie. Drilling for the most part is a purely scientific endeavor – whose aim is simply to prove or disprove an exploration company’s hypothesis, about the existence of minerals. Drill results turn theories into facts.

Bearing this in mind, Ahead of the Herd is covering four companies that are drilling right now for gold and silver. We are eagerly anticipating results. Two of them, Mountain Boy Minerals and Renforth Resources, are in Canada, Getchell Gold is positioned in Nevada, and Brigadier Gold is working in Mexico.

The 20 to 30-hole drill program’s goal is to confirm the geological model, ie., that the various mineralized occurrences are surface expressions of a large geological system, analogous to the nearby Premier District hosting the past-producing Premier Gold Mine. (Premier started operations in 1918; at the time it was one of the greatest silver and gold mines in the world) 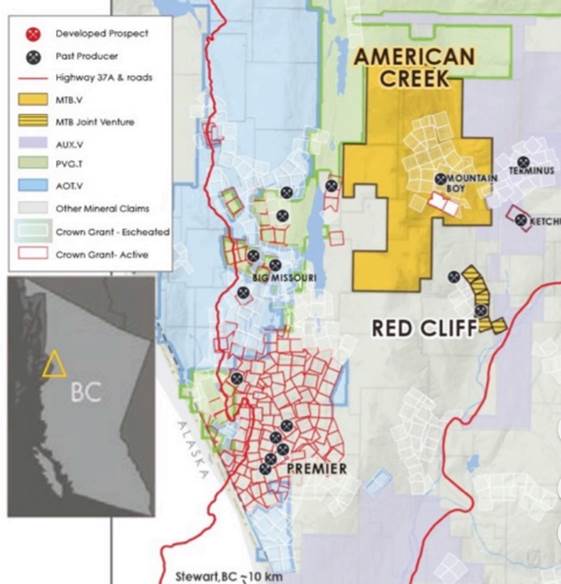 Drilling around the historic Mountain Boy Mine follows up the 2006 drill program, the intention being to test the high-grade zone for continuity, along strike and at depth.

The aptly named High Grade Vein was the heart of the historic mining. Six holes intercepted more than a kilogram of silver over at least a meter, with the highlight being Hole 2006-10 which hit 5,258 g/t over 5.18 meters. (5 kg is 160 troy ounces). These results have never been followed up. Until now. The untested Franmar vein will also be drilled.

An earlier induced polarization (IP) survey focused on the recently discovered Wolfmoon zone; it was the first target to be drilled, and the crew is now finished there. Interestingly, Wolfmoon is believed to be at a higher stratigraphic level than the veins around the old mine. Notably, the Wolfmoon mineralization is found at the transition between volcanic and sedimentary rocks. This stratigraphic position hosts volcanogenic massive sulfide deposits such as Eskay Creek and elsewhere in the Golden Triangle.

Surface samples with high gold and silver grades were identified within an extensive alteration zone, which has recently emerged from ice cover. The best grab samples were 28.5 g/t gold and 1,200 g/t silver.

The third target is the northern extension of the Mountain Boy Mine’s silver-bearing veins, onto the recently optioned Dorothy property.

Ongoing geological work, including mapping and structural interpretation, is enhancing the understanding of the mineralization and the orientations of these multiple silver veins.

There are 15 discovered vein occurrences within the Dorothy property and Mountain Boy has interpreted them to be part of the same hydrothermal system that deposited high-grade silver at the Mountain Boy Mine. Could the High Grade Vein, and others in the system at the MB Silver mine extend north 2 km onto Dorothy? We don’t know, but the possibility is intriguing.

“We’re drilling three distinct target areas, any one of these could be a company maker,” CEO Lawrence Roulston says with confidence.

“We’re counting on some big hits on the grade on these initial drill holes, but whether or not we get the grade the real objective of the current drilling program is to demonstrate the extent of the veins. We know it’s a really extensive geological system that spans several kilometers. We see individual veins that we know go for hundreds of meters, and if we can drill into these veins in different places and demonstrate we’ve got the potential for size, then that will really advance the project enormously. If we get grade as well as size, then that’s a bonus.”

“We are intent on demonstrating that this is a district-scale project exactly like the Premier District west of us, where there are multiple high-grade deposits over an extensive area. We believe we’ve got exactly the same as on the Premier camp and this drilling will be the first indication leading us in that direction.”

Mountain Boy Minerals is expected to have news throughout the winter and has started planning for the next phase of exploration in the spring.

At Getchell Gold’s Fondaway Canyon property in Nevada, four of six holes planned as part of a 2,000m drill program have been completed, with samples from the first two holes already sent for cutting and assaying.

The first set of results from these drill cores are anticipated within a month.

Fondaway Canyon consists of a land package comprising 170 unpatented lode claims. The property has a history of previous surface exploration and mining in the late 1980s and early 1990s.

Mineralization is contained in a series of 12 steeply dipping en-echelon quartz-sulfide shears outcropping at surface and extending laterally over 1,200m, with drill-proven depth extensions to >400 m. The deposit is hosted by Mesozoic age sediments and minor volcanics.

The company’s aim is to investigate potential similarities with the world-famous Carlin-style gold system, which is noted for its “disseminated” (fine-grained) nature. As such, additional work on the veins at Fondaway is warranted.

The fact that Fondaway Canyon has stibnite boulders on the property is very encouraging, the explorer previously noted, because a combination of arsenic and antimony (stibnite) is “a strong indicator of a big system.”

The project features over 150 historic mines and underground workings. The veins are open at depth and have never been diamond drill-tested.

Brigadier aims to prove the potential for multiple veins; the depth, strike length and continuity of the veins; and get an understanding the source of the vein-hosted mineralization, along with its potential relationship to copper porphyry mineralization identified on the property.

Primary targets include under-explored gold veins at the past-producing San Agustín mine, where about 665 meters of underground development has been completed. Underground channel sampling by a previous operator returned an average 81.22 g/t Au and 73.36 Ag across 1.2m. Values from the bottom of a 45-meter-deep production shaft were 185 g/t Au.

The first five holes of the drill program at Picachos have reportedly intersected the San Agustín vein up to 180m below surface. 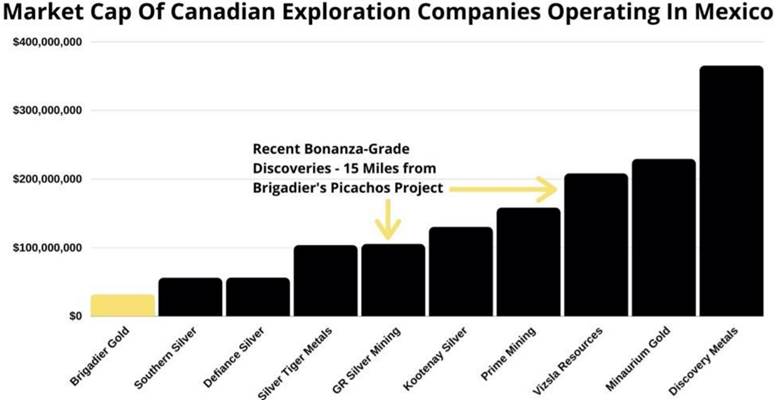 According to the Nov. 2 news release, Hole BRG-004 hit the vein 16 meters below a historic underground rock chip sample containing 125.52 g/t Au and 75 g/t Ag across 1.5m. Anomalous silver, expected to correlate with gold, was identified using an XRF analyzer at several locations in Hole BRG-004, peaking at 86 ppm Ag between 63m and 76m down hole.

A second hole, BRG-005, cut into the San Agustín vein 51 meters below where Hole BRG-004 intercepted it. Here the XRF silver anomaly associated with the vein reached a high of 68 ppm Ag, between 92 and 115m down hole. Gold was shown in panned pulp samples from quartz-specularite and microcrystalline quartz veinlets.

Drill core from both holes was sent to an assay lab in Durango, with results pending.

Along with San Agustín, the first-ever diamond drill program at Picachos will zero in on the Mochomos vein, where a historic rock chip channel sample yielded 18.5 g/t Au and 570 g/t Ag over half a meter; the Los Tejones vein with values of 28.6 g/t Au and 114 g/t Ag across a meter; and the Fermin vein, which sampled 268 parts per million (ppm) Ag and 0.3 g/t Au over 1m.

Interview with Ranjeet Sundher, CEO, Brigadier Gold, Ahead of the Herd, Recorded August 24, 2020

The campaign will also include 3 line-kilometers of trenching, across a number of historical sample sites where anomalies have been identified, and drill targets can be formalized.

Renforth Resources is making good progress at its Parbec property in northern Quebec, having completed about half of a planned 7,000m drill program.

Renforth Resources is not looking for mineralization; they have already found it at Parbec, which contains an updated resource estimate. Renforth is focused on increasing the resources at brownfield projects, by proving mineralized structures and occurrences not fully defined, and open to expansion.

Located on the world-famous Cadillac Break gold trend, the project borders the Canadian Malartic mine, and is adjacent to the past-producing East Amphi mine, where the joint venture that owns Canadian Malartic, Canada’s largest gold mine, has been drilling. 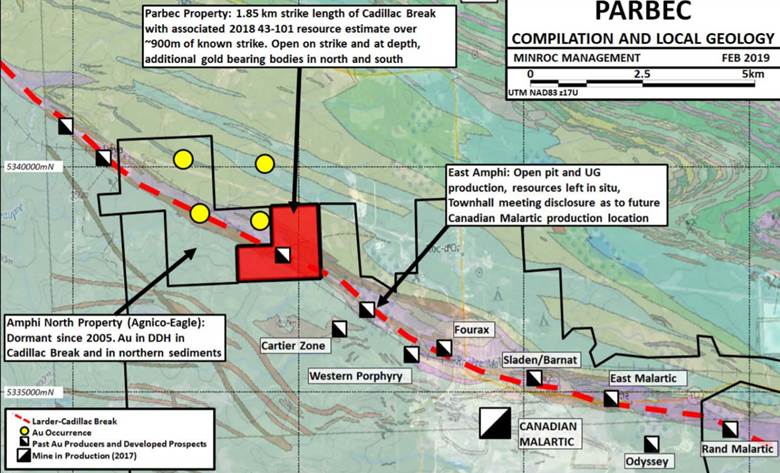 On Oct. 28 the company released partial assay results for Hole PAR-20-100. This hole was drilled due north, through the Cadillac Break, for 405m, encountering the expected Parbec lithologies, including the “magnetic diorite”, associated with the presence of gold.

Interview with Nicole Brewster, Renforth Resources, Ahead of the Herd, recorded August 2020

Assays so far are encouraging and I look forward to seeing the rest of them.  According to Renforth, they plan on drilling around 7,000m prior to Christmas and another 7,000m in the New Year, for a total of roughly 14,000m of new drill core and data from Parbec.

Between Renforth, Brigadier, Getchell and Mountain Boy, I expect a steady flow of news for the rest of the year and well into 2021. At AOTH, we are very optimistic about the fall work programs being undertaken by these four companies. Stay tuned. We will be revisiting each of their stories, and exploration hypotheses, as more drill results are released.

Richard owns shares of Brigadier Gold (TSX.V:BRG). BRG is a paid advertiser on his site aheadoftheherd.com