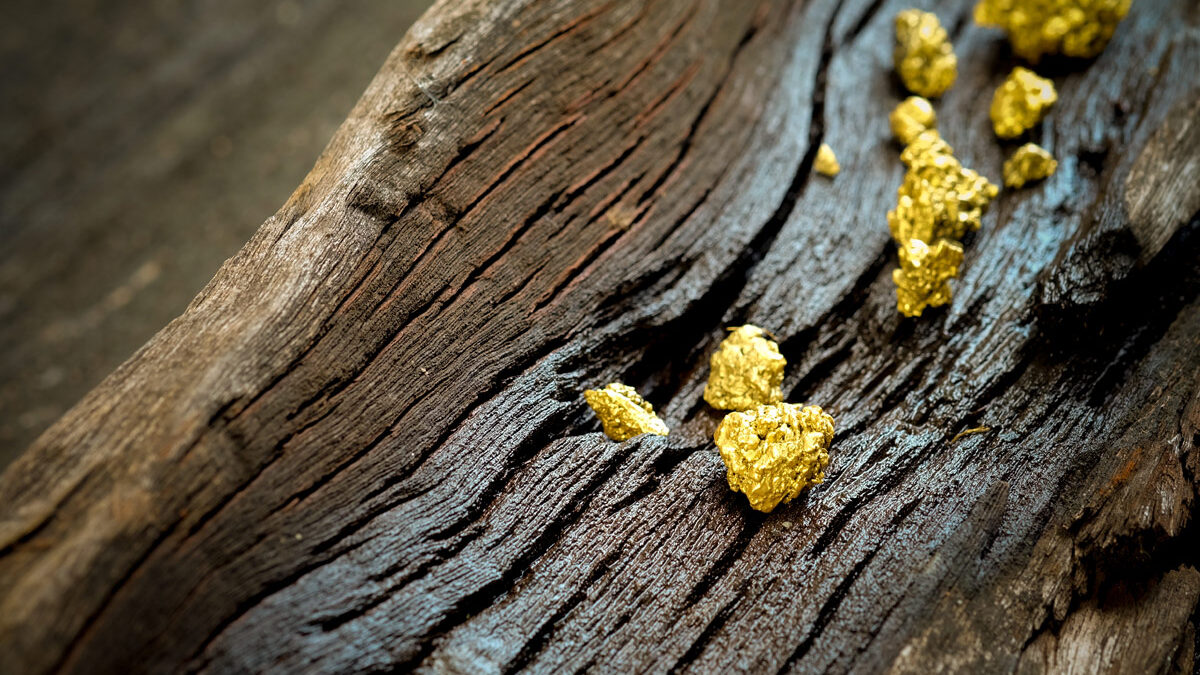 Last year, the company completed almost 10,000 meters of drilling at the brownfield property, located on the Cadillac Break, a regional fault zone thought to host a whopping 45 million gold ounces.

The world-renowned structure stretches from west of Kirkland Lake in Ontario to east of Val d’Or, Quebec, which translates to “valley of gold”.

The Cadillac Break has been mined to various extents since the early 1900s, but it wasn’t until the 1990s that new mines were discovered along the gold trend, which revitalized mining and mineral exploration in the area. They include Agnico Eagle’s LaRonde Mine, the old O’Brien Mine now owned by Radisson Mining, and the Canadian Malartic Mine, a joint venture between Agnico Eagle and Yamana Gold that is currently Canada’s largest gold mine.

Parbec is an open pit-constrained gold deposit, adjacent to the past-producing East Amphi Mine.

Drilling by Renforth in 2019 showed that mineralization at Parbec is continuous for 1.8 km along the Cadillac Break, right up to the border with East Amphi, a portion of the Canadian Malartic Mine where resources were left underground following the cessation of mining in 2007.

Among the highlights were three areas of mineralization on the property:

Renforth’s geological team believes there are likely cross-cutting structures running across the Cadillac Break that were missed in previous drill programs, which could add more gold ounces to the project’s resources.

The drill holes are in-filling the NI 43-101 open pit resource model at Parbec, as well as twinning some of the historical drill holes from the 1980s.

According to Renforth’s President and CEO Nicole Brewster, “We are getting widths which can, in several instances, extend to multiple meters as well as grades that are coming in higher than our open pit-constrained 43-101 resource estimate grades.”

The latest drill results from Parbec, delivered on Jan. 11, include two more holes, bringing to five the number of holes reported on, so far. The highlight was hole PAR-20-104A, which assayed 1.72 g/t Au over 13m, drilled into sediments.

Holes 20-104 and 20-104A were drilled from the same collar location, with 104A terminating at 66m depth, due to the blocky ground causing the drill to deflect from the planned dip and azimuth. However, Renforth says For the entire length of the terminated hole the core consists of sediments, consistently along almost the entire 66m is the logging of quartz/albite/carbonate veinlets, running with (parallel), and across (perpendicular), the drill core. The drill hole was drilled to the NE, perpendicular to the Cadillac Break.

Hole 104 for the first 66 meters was also (largely) comprised of quartz/albite/carbonate veinlets running with and across the drill hole.

Renforth says These holes also confirm that there is a highly prospective gold bearing package at Parbec located within the sediments, outside of the Cadillac Break and its mineralized lenses, which requires additional follow up work.

The company is currently splitting samples for seven holes not yet sent to the lab, and plans to resume drilling shortly on the balance of the 15,000m program.

Along with Parbec, Renforth is developing a second deposit in the Abitibi region called Surimeau. Instead of expanding on known gold mineralization, here the company is focusing on the polymetallic potential of the Cadillac Break.

A maiden drill program, which only completed 200m of drilling in 2.3 holes, stopped due to mechanical and weather breakdown issues, has already led to the successful identification of polymetallic mineralization in core, of a tenor higher than surface results.

In drill holes SUR-20-001 and SUR-20-002, visual description identified intervals of strong stringer zones and disseminated sulfides, mainly pyrrhotite, on multiple intervals varying between 1m and 13m of core length. Overall, the sulfide-bearing envelope makes respectively 26.5m and 60m for the two holes, which are located about 220m apart.

“We consider our achievement to be a new discovery at Surimeau, where we have proven over 200m that the geophysical anomaly and its associated surface mineralization carries metal sulfides sub-surface, at some initial depth,” Brewster stated in a media release.

Samples have been split and submitted to the lab, with results pending. Select pieces were sawn, as opposed to split, in order to offer a better look at mineralization seen on the outside of the core.

And this just in:

Renforth will soon be getting some expert advice on Surimeau, having appointed Dr. James Franklin as Principal Technical Advisor on the project. The company says Dr. Franklin, a member of the Canadian Mining Hall of Fame, and the former Chief Scientist for the Geological Survey of Canada, “brings unparalleled expertise in the identification and maturation of VMS deposits worldwide, an experience which will be put to good use on our 215 km2 Surimeau property, where we recently encountered visible nickel, zinc and copper sulphides in our maiden 200m drill program targeting the southern 20km geological/geophysical trend (PR Nov. 24/20). Our drilling, which was in the Victoria West area, in the western end of the trend, extends the presence of mineralization (as seen in previous surface sampling by Renforth and historic trenching, with limited drilling), to a strike length of 5 kms, with very little drilling along that length. Prior to Renforth, the last significant work in the Victoria West area of the Surimeau property was in the 1990’s by Lac Minerals.”

“I consider Renforth fortunate to have at our disposal the knowledge and experience that is Dr. Franklin, the cumulative result of a long, successful career spanning the globe, discovering and developing a multitude of mineral deposits. This will focus and accelerate Renforth’s task, unlocking the true potential of our VMS discovery at Surimeau, in as efficient a manner as possible, with an experienced and high profile industry veteran on our team.”

An Ahead of the Herd analysis has found that gold, and its sister precious metal silver, will do very well under a Biden presidency. The main factors are drastically increased government spending, leading to even more unsustainable debt levels than currently, along with rising inflation; dovish monetary policies at central banks especially the US Federal Reserve which continues to advocate near 0% interest rates; and a sinking US dollar. Gold prices and the USD generally move in opposite directions.

The Democrats winning the White House and both Houses of Congress is bound to be good for both metals because of Biden’s propensity to add to the debt. There is a close relationship between debt to GDP ratios and gold. The lower the GDP and the higher the debt, the better it is for gold.

In fact having the Dems in charge could be a political driver for gold this year. According to the World Gold Council’s head of research Juan Carlos Artigas, via Kitco News, historically, when there has been a Democratic president combined with the majority in the Senate and the House, gold has tended to perform well. “There is a perspective that some policies may create higher deficits, increase in money supply, and create inflationary pressure,” he says.

Of course, we already see this foreshadowed. Before even taking the inauguration oath, President Joe Biden promised a massive third stimulus package aimed at getting the coronavirus pandemic under control and rebuilding the US economy, which has been pummeled by the virus.

Among the key elements of the $1.9 trillion American Rescue Plan are larger stimulus checks; more aid for the unemployed, hungry and those facing evictions; additional supports for small businesses, states and local governments; and more funding for vaccinations and covid testing.

Trillions more dollars are expected to be printed and spent, including on Biden’s $2T Clean Energy Plan, education, “blacktop” infrastructure, a $15 dollar an hour minimum wage, and myriad other items on the wish list of the Democratic Party’s left wing whose ambition is to redress social inequalities in the United States.

Many market observers expect that all of this spending, set against slack demand in the economy due to virus-related restrictions and business closures, will bid up the US inflation rate, which currently sits at 1.4%.

We are even more certain the printing presses are about to be turned on “high”, following Sen. Bernie Sanders’ stated intention he would use a tactic known as budget reconciliation, to pass key parts of Biden’s agenda, if Republicans refuse to support the President’s plans. Sanders, the most left-leaning of the candidates who ran for the Democratic nomination clinched by Biden, is now the Chair of the Senate Budget Committee, giving him the power to quickly advance high-priority fiscal legislation. In effect, that means making such legislation exempt from “the filibuster” a political tactic whereby members of Congress engage in lengthy debate over a proposed bill to delay or prevent a decision.

Legislation that is subject to budget reconciliation would also require less Republican support; such bills would only need 51 votes as opposed to the 60 required under general Senate rules. The Senate is currently deadlocked at 50 members apiece for Democrats and Republicans, with tie votes to be broken by Democratic Vice President Kamala Harris.

Kitco also reports Artigas, of the World Gold Council, saying that gold prices are likely to benefit, whether the economic environment is inflationary (rising prices) or deflationary (falling prices).

“When inflation expectations increase, investors start to look for a hedge against inflation. Gold historically tends to outperform other assets in a period of high inflation,” he said. “In a deflationary period, cash tends to be very useful. Gold may still be functioning. Even though it is not a currency in itself, it functions as a de facto currency, preserving capital, especially in an environment where the money supply is increasing a lot. If you combine it with the fact that interest rates are at extremely low levels or negative, it signals that gold could be used in that environment.”

Renforth Resources is thus working its properties in Quebec at the perfect time for gold, what we believe to be a continuation of the 2020 gold price bull that saw the spot price hitting a record-high $2,034 an ounce last August.

Renforth describes itself as fully funded and asset rich. With about $6.8 million in its treasury, the company is cashed up to continue its exploration, including at Surimeau, and more drilling plus a resource update at Parbec, expected in Q2.