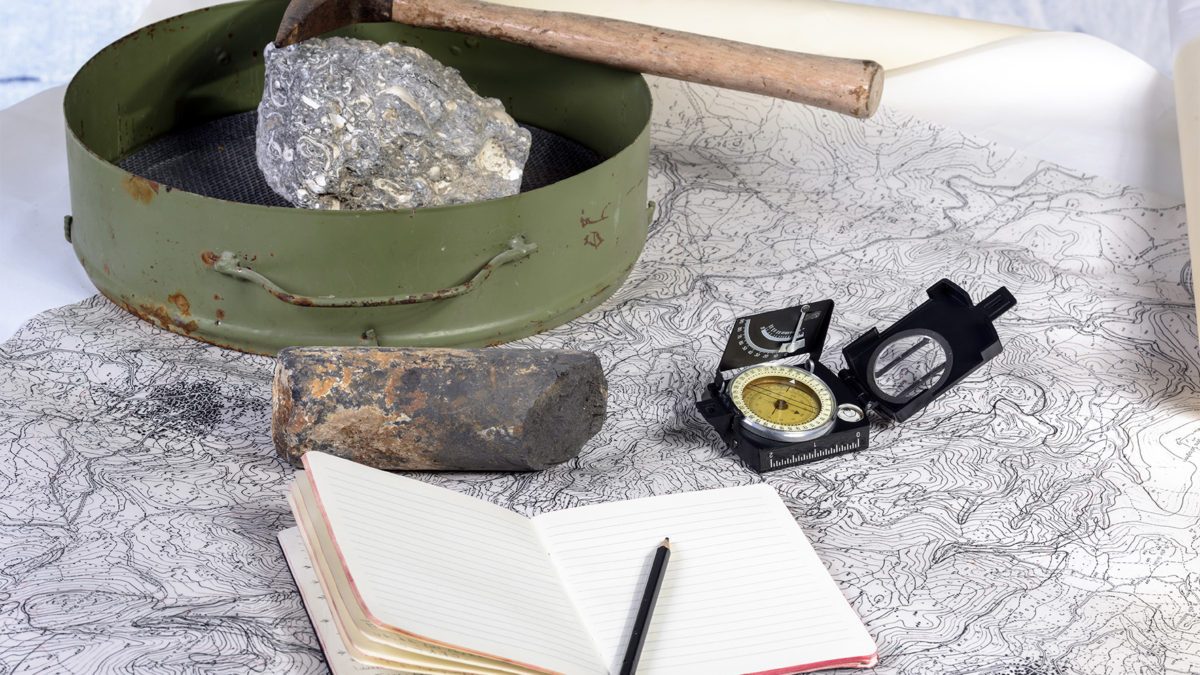 Volcanogenic Massive Sulphide (VMS) deposits are one of the richest sources of metals such as copper, lead, and zinc, as well as gold and silver byproducts.

These deposits are often formed during periods of rifting, when the Earth’s crust is stretched thin due to the pushing and pulling of tectonic plates in areas of ancient underwater activity. As the crust warms from this volcanic activity, the ground softens, allowing hot magma to move up towards the ocean floor.

The magma then either pushes through the Earth’s surface, thus forming a volcano, or causes cracks that draw seawater into the crust. The water is superheated and imbued with minerals, then expelled to the surface through black and white smokers. These plumes of minerals flowing from cracks in the ocean floor eventually settle back to the ocean the further they move away from the heat source.

Over time, the continual activity of the smokers and their mineral-rich plumes create mineralized beds that become the VMS deposits that we know today.

VMS Deposits in the Abitibi

There are several large VMS camps known to Canada, including the Flin Flon, Bathurst and Noranda camps. Deposits within these camps often contain 5 to 20 million tonnes of ore, and they can be much larger.

Some of these VMS deposits have already been developed into world-class mines, including the famous Flin Flon mine in Manitoba operated by Hudbay Minerals and Glencore’s Kidd mine in Ontario, the deepest base metal mine in the world.

Many VMS deposits in Canada are found within the Abitibi Greenstone Belt — the world’s largest mineral-rich greenstone geological belt. This 450 by 150 km geological structure runs through the Canadian Shield, from west of Timmins, Ontario, then eastward to Chibougamau, Quebec.

The Abitibi is home to Canada’s largest operating gold mine — the Canadian Malartic mine jointly owned by Agnico Eagle and Yamana Gold. In 2019, it yielded 662,918 ounces of gold, making it one of the best producers in the world.

But even the biggest mines like the Canadian Malartic have depleting reserves, and those ounces will need to be replaced continuously. This natural decline of major operations presents junior miners a tremendous opportunity for exploration.

Next to the Canadian Malartic, Renforth Resources Inc. (CSE: RFR) (OTC US: RFHRF) (WKN: A2H9TN) has been actively exploring the Malartic camp, seeking to unlock the polymetallic potential of the Cadillac Break. The company recently began a planned 1,000 m drill program at its newly enlarged Surimeau property following the staking of an additional 219 claims (area outlined in blue on the map below).

This property — now covering a total area of 215 km2 — is host to a known polymetallic (copper and zinc) mineralized system with additional geophysical anomalies. There is also an ultramafic nickel system nearby.

The project represents the consolidation of four historic properties into one property for the first time, creating an approximately 50 km mineralized geophysical system within southern (20 km) and northern (30 km) arms.

Historically, parts of the Victoria trend were initially identified as a strong airborne conductor. Follow-up drilling during the 1950s and 1970s have identified a strong multi-kilometric zone of strong disseminated sulfides mineralization, without the ability to determine a genetic model.

According to Renforth, this is a very large geophysical trend that is mostly under cover, which may pose exploration challenges for an anomaly of this size. This is why the company was able to assemble these historically explored areas of mineralization into one large property in the first place.

For now, will Renforth need to be innovative, effectively prospecting with a small drill.

“We have embarked on a drill program at Surimeau, as we were able to hire an excellent driller, with a low-impact mobile machine, to cost-effectively give us a window into parts of the 20+ km long Victoria West-Colonie southern trend,” Renforth president and CEO Nicole Brewster commented on her company’s latest exploration activity.

So far, the first drill hole in this program has already resulted in the identification in core of various types of mineralization: blue quartz veins with sulfides in felsic dykes, calc-silicate alteration in replacement of ultramafic lenses, sulfide-bearing sediments with strong biotite-cordierite alteration.

All these units share the same sulfides assemblage composed of pyrrhotite, pyrite and sphalerite.

As mentioned, aside from the known copper-zinc mineralization, Surimeau also hosts a large-scale nickel sulfide-PGE system with nickel-hosted ultramafic rocks and VMS features typical of the Cadillac-Larder Lake fault zone.

As of now, the company has no definite explanation for the occurrence of two disparate systems in such unique proximity, but points out that there are similar precedents worldwide.

While nickel is mostly used for stainless steel, the metal has become increasingly vital for the production of batteries in electric vehicles. A majority of the world’s nickel comes from laterite deposits, such as those found in Indonesia and the Philippines. But they can also be produced from sulfides.

In the past, nickel sulfide ores were mostly mined in the Sudbury deposits in Ontario, Norilsk in Russia and the Bushveld Complex in South Africa, and existing sulfide mines are becoming depleted.

Thus, the nickel sulfide interpretation at Surimeau could be a significant find, as large-scale sulfide deposits are not common around the globe. Also, the property hosts nickel sulfides including pentlandite; this is the type that battery manufacturers are looking for.

Historic surface sampling in the Victoria area of Surimeau had values as high as 0.503% Ni. A team of Renforth geologists previously visited three of the four areas and took grab samples that support such findings.

Just how large this nickel sulfide system remains to be seen, but the newly acquired Fouillac showing gives an indication that there could be a large nickel deposit waiting to be outlined.

Initial prospecting at this showing resulted in several samples being taken from potential gold host environments and a nickel target similar to the Victoria West portion of the Surimeau property.

While Renforth is kicking off a drill program at Surimeau, drilling is also continuing at its Parbec gold property, also situated within the Malartic camp and contiguous to the East Amphi portion of the Canadian Malartic property.

With the Canadian Malartic mine facing declining production, Parbec could offer nearby and accessible surface ounces, perhaps at an even higher grade than the published throughput grade (1.14 g/t) of the operating mine.

This program was designed to add ounces to the deposit. The drill holes are infilling the NI 43-101 open pit resource model at Parbec, with some planned infill of historical drilling in the 1980s, as well as testing for downdip extension.

The company is confident that the goal of drilling 7000 m prior to Christmas will be met.

With drilling now underway at two properties within an established mining camp in Canada, Renforth appears to be onto something big, especially with the nickel-bearing system seen at Surimeau.

The fact that it already has its properties are all on or near major mineralized geological structures means the company doesn’t even need to waste any time and go straight into the later stages of exploration.

Funding is also not an issue, with approximately $8 million cash on hand from a previous property sale and a recent private placement which saw the company’s stock sold at a significant premium.