The fees that copper mining companies get charged by refineries to smelt their copper concentrates have fallen to a new low as China looks to position itself as the dominant producer of refined red metal.

On Monday treatment charges fell to $56 a tonne, the lowest since November 2012, according to analysts at Goldman Sachs. Output for the first half was curtailed due to plant maintenance, tight credit and technical issues, said the influential bank, via Bloomberg.

Plants that hedged their TCs at the 2019 benchmark of $80.80 a tonne – referenced in long-term miner-smelter contracts – aren’t affected by the much lower treatment costs, but some smaller facilities that haven’t hedged are finding their margins stuck below the $70/t breakeven TC price. Their response is to temporarily halt production until treatment costs rise.

Why are treatment costs falling? It has to do with China’s drive to build more domestic copper smelters. Four of the five largest copper smelters in the world are located in mainland China. The country’s copper refineries are expected to add nearly 1 million tonnes of capacity, biting into marketshare from rivals Japan, South Korea and Chile, Reuters said.

The increased competition has pushed down treatment costs, as Chinese refineries undercut each other to attract mining companies’ concentrates (miners sell copper either as concentrates or cathodes). Treatment and refining costs tend to rise when there is lots of copper ore available, and drop when supply becomes scarce, which is what is happening now.

The upshot of copper bottlenecks forming at smelters worldwide due to low treatment costs, is a major disruption to the copper supply chain. Among the large smelters that have temporarily shut down are Glencore’s Mufulira smelter at the mine of the same name in Zambia, and Nchanga, also in Zambia, operated by Konkola Copper Mines (KCM), which halted operations in June.

All these production cuts at refineries have upset the global refined copper balance; the market logged a deficit of 32,000 tonnes from January to March, compared to an 81,000-tonne surplus for the first three months of 2018.

Colin Hamilton, the BMO Capital Markets analyst, said BMO had factored in around 3% of annual copper supply could be lost to disruptions at refineries, but half of that amount was already reached in the first four months of the year.

The Goldman analysts are expecting about 5.5% of the copper market, or 1.2 million tonnes, to be disrupted this year. Bloomberg reports That, combined with a “relatively empty project pipeline will lead to the weakest supply growth in a decade, on a three-year rolling basis,” they said.

As we wrote in The coming copper crunch without new mines up and running to replace the ore that is being depleted from existing copper mines, we are looking at a 15-million-tonne supply deficit by 2035. Four to six million tonnes of added capacity are needed by 2025. Lower ore grades are also part of the waning supply picture. Copper grades have declined about 25% in Chile in the last decade – highlighting the urgent need for grassroots exploration to arrest the trend.

Global copper output is falling. Exports from Chile’s Escondida, the world’s second largest copper mine, are expected to drop this year by 85% due to operations moving from open-pit to underground. That’s a dramatic fall from 1.8 million tonnes in 2018 to just 200,000 in 2019. The mine is expected to take until 2022 to re-gain full production; I find it hard to believe they will produce the same tonnage from underground as open pit.

A two-month strike in Peru at MMG’s Las Bambas mine meant a 15% drop in second-quarter production.

A processing problem at BHP’s Olympic Dam copper, gold and uranium mine ate into the company’s second-half production numbers. Problems in Zambia, Africa’s second-largest copper producer, are putting a big question mark beside the country’s output.

Another example of copper output declining is an expected delay at Mongolia’s Oyu Tolgoi mine going underground. Difficult ground conditions are cited as the reason the expansion could be delayed up to 30 months.

With so much mined metal staying in the ground, supply lagged demand by 155,000 tonnes in the first four months of the year, according to the International Copper Study Group, more than double the 64,000-tonne shortfall in the same period of 2018.

Goldman Sachs’ analysts noted that the supply bottlenecks at refineries haven’t yet been factored into copper prices; three-month futures finished Monday at $5,974 a tonne ($2.70/lb) in London. In other words, look for prices to move higher. 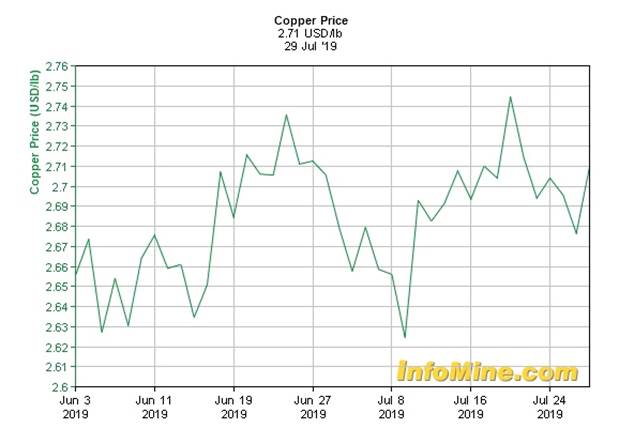 Three of the world’s largest investment banks, Morgan Stanley, Citi and Goldman Sachs, have all placed bullish bets on copper this year; Morgan Stanley expects the price to rocket 14% as supply tightens. Citi is predicting a demand surge from China in the second half, as construction completions requiring copper catch up with housing starts.