The first results of Palladium One’s (TSX-V:PDM) IP survey are in, and they’re excellent.

In January PDM commenced an induced polarization (IP) survey, designed to zero in on shallow zones of conductivity, containing higher sulfide concentrations. These zones will then be drill-tested with up to 5,000 meters of diamond drilling.

Last year the company published the first (maiden) NI 43-101-compliant resource at Kaukua, putting Palladium One on track for developing an open-pit PGE-nickel-copper mine in Finland.

Palladium One wishes to add up to a million more ounces of palladium-equivalent resources (Pd_eq) to the Kaukua optimized pit.

IP surveys are commonly done in base metals exploration to locate ore deposits such as disseminated sulfides.

A previous IP survey worked well in identifying the core of the Kaukua deposit, which hosts 1.2 million Pd_eq ounces and has a strike length of one kilometer.

The five grids represent about 12 kilometers of strike length, of what PDM believes is the highly prospective basal (base) unit of the Koillismaa mafic-ultramafic complex, that hosts the Kaukua deposit.

In its Feb. 25 news release, Palladium One says initial results from the first grid, Kaukua East, have discovered a large chargeability anomaly. Finding the anomaly, which is indicative of underground mineralization, means the palladium-dominant Kaukua South Zone now extends over a 2-km strike length.

“Significantly, the chargeability anomaly on the new Kaukua East survey appears to be more intense and wider than the one on the 2008 survey, making it a very high priority drill target,” President and CEO Derrick Weyrauch stated.

Areas of high chargeability show up green, in the figure below. 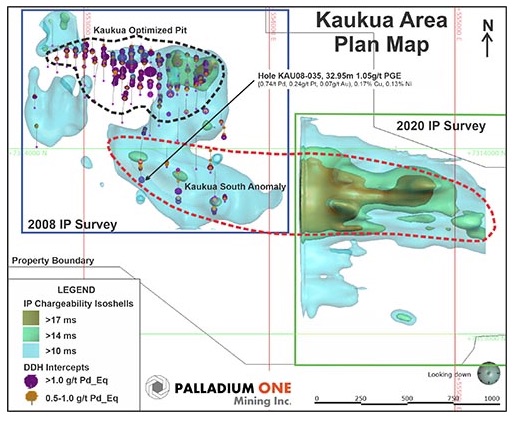 The anomaly is also significant because it amends an earlier theory that the Kaukua South Zone was “cut-off to the east,” suggesting the Kaukua mineralized system is much larger than previously thought.

To explain, the 2008 IP survey did not identify any chargeability anomalies on the far eastern end of the Kaukua East grid. At the time, drilling was therefore directed away from the area, on the premise that mineralization must not exist to the east.

However, several holes on the western edge of this “gap zone” (illustrated by the area within the red rectangle in the figure below) delivered highly anomalous mineralization. These holes were never followed up on to the east, and the 2020 IP survey provides strong evidence that Kaukua-type mineralization could extend well to the east.

According to the news, the four most easterly lines of the 2008 IP survey are therefore being re-surveyed, with the Kaukua South’s eastern extension now a top-priority drilling target.

Currently and for the foreseeable future, palladium is facing constricted supply. The palladium market has been in deficit for eight straight years. The reason has mostly to do with structural problems in South Africa. About 90% of palladium is mined as a by- product of nickel and copper in Russia, and platinum in South Africa. These two countries dominate the market.

South Africa’s platinum mining companies are under constant pressure to contain costs, because their mines are very deep, hot and labor-intensive. They also face frequent strikes. In 2014 workers at the country’s three major producers – Lonmin (now Sibanye-Stillwater), Anglo American Platinum and Implats – downed tools for five months demanding that wages be doubled. Additionally, there are significant infrastructure constraints; the country has limited processing capacity and water is a constant concern.

On the demand side, diesel engines are being phased out in favor of gas-powered cars and trucks that meet stricter emission regulations, particularly in Europe and China. As drivers shift from diesel to gas-powered cars or hybrids, demand for palladium has buoyed the price. Despite a global downturn in auto sales in 2018 and 2019, palladium prices have stayed strong, on concerns that the mining industry will be unable to meet the demand for cleaner-burning vehicles.

Recently Nornickel, one of the world’s largest palladium producers with mines on the Taimyr and Kola Peninsulas in Siberia, said it is planning to ease market tightness by shifting more production to investment-grade palladium ingots, from the powdered form required by industrial end users.

The company is expected to deliver three tonnes of ingots to help meet demand from palladium bullion investors.

At AOTH, we see that induced polarization surveys are a great tool for pinpointing high-grade targets (for at least 5,000 meters of drilling slated to begin shortly) – the 2008 IP survey at Kaukua is an example.

And while it’s a bit early to say, we see the potential for a second open pit, or an extension of the Kaukua constrained pit, should drilling at Kaukua South hit mineralization matching the chargeability anomaly identified by the IP survey.
It’s exciting to consider that Palladium One may already be well on the way to fulfilling its ultimate goal of finding, and defining, more than 3 million ounces of Pd eq in open-pit resources at LK.

This bodes well for explorers like PDM whose deposits contain significant amounts of palladium, as well as nickel and copper, which are also required by electric vehicles and their lithium-ion batteries.

We look forward to more survey results and seeing how the upcoming drill program will unfold.

Richard does not own shares of Palladium One (TSX.V:PDM), PDM is an advertiser on his site aheadoftheherd.com