Notable for its high nickel-tenor potential, Tyko is located in northwestern Ontario around 25 km north of the Hemlo mine, and 55 km from the Marathon deposit which hosts a measured and indicated resource of 3 million ounces palladium and 618 million pounds of copper.

All three areas yielded significant prospecting samples of up to 0.74% nickel, 4.09% copper, and 2.51 grams per tonne (g/t) platinum group metals (PGM). The latter is an aggregate of platinum, palladium and gold values.

Thirty-four prospecting and 39 soil samples were collected over a two-week period, including the first samples taken from the newly-staked Shabotik showing.

“Our reconnaissance prospecting and soil sampling program tested several parts of the property with EM and mag anomalies that had not been mapped or prospected,” President and CEO Derrick Weyrauch stated in the news release.

“While few bedrock outcrops were observed, gabbro and pyroxenite boulders suggest that favourable host rocks may occur nearby. We look forward to the results of soil samples collected in these, overburden covered areas.”

Based on the program’s success, Palladium One staked an additional 87 claim units, bringing the total to 479 claim units encompassing 10,320 hectares.

2019 exploration at Tyko also revealed some very interesting geophysical and geochemical results that point to a compelling new drill target at Smoke Lake – where a very low frequency (VLF) survey in 2016 delineated a north-south-trending electromagnetic (EM) anomaly over a strike at least 300 meters long. 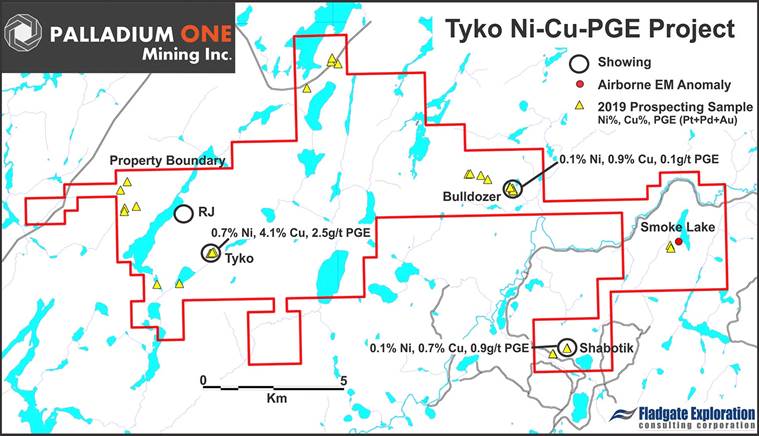 Soil sampling in the fall of 2019, along this north-south trend, produced highly anomalous nickel-copper samples, up to 238 parts per million (ppm) nickel and 108 ppm copper.

Notable among the soil samples is the difference between the background values and the high nickel and copper values.

“These soil values represent up to 22 times the background values for both nickel and copper, and as a result, have confirmed the Smoke Lake airborne EM anomaly as a compelling drill target,” says CEO Weyrauch, in the Jan. 27 news. “The clear nickel-copper-cobalt signature, in soils slightly mobilized along historic glacial ice flow, from the EM anomaly suggests a classic geochemical response to overburden-covered nickel-copper-cobalt sulphides.”

The company expects to drill the Smoke Lake target in the coming months.

Meanwhile at its LK PGE-Ni-Cu project in Finland, Palladium One has initiated an induced polarization (IP) survey, announced earlier this month. The IP survey is designed to zero in on shallow zones of conductivity, containing higher sulfide concentrations. These zones would then be drill tested with up to 5,000 meters of diamond drilling The primary goal of the Phase 1 exploration program is to update a historical resource estimate at Haukiaho, via infill and expansion drilling of the previously-explored deposit. Palladium One’s desire is to add up to 1 million ounces of palladium equivalent resources to the existing high-grade open pit Kaukua zone resource.

IP surveys are commonly done in base metals exploration to locate ore deposits such as disseminated sulfides.

The five grids represent a strike length of about 12 kilometers, of what PDM believes is the highly prospective basal (base) unit of the Koillismaa mafic-ultramafic complex, that hosts the Kaukua deposit.

“Our phase 1 program includes both IP geophysics and up to 5,000 metres of diamond drilling. SJ’s three-line 3-D IP system was originally used to great effect in the definition drilling of the Kaukua deposit in 2008,” Weyrauch said in the Jan. 14 news release. “We look forward to using the updated high-resolution five-line 3-D IP system to identify and model zones of higher sulphide concentration along about 12 km of favourable basal contact. This survey is significant as historically only about four km of LK’s about 38 km basal contact has been systematically tested.”

First results are expected as early as next week, followed by diamond drilling later this month. 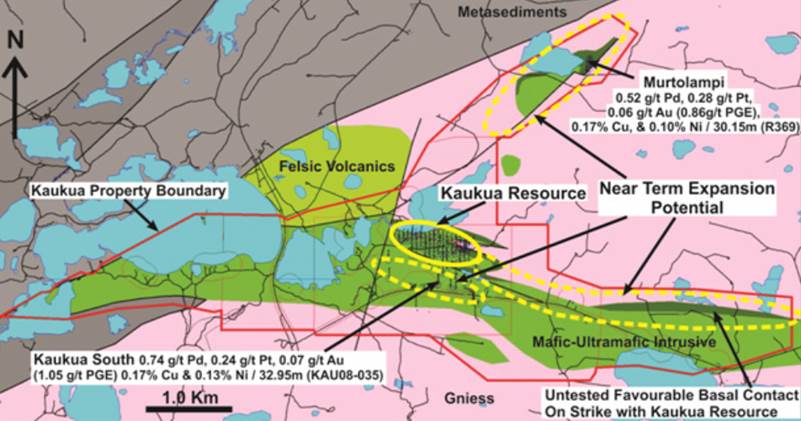 Near Term potential for Resource expansion at Kaukua

“We believe that the Haukiaho zone holds great potential not only for expansion of the historic Haukiaho deposit but also new discoveries along this about-12-kilometre trend,” Weyrauch added. 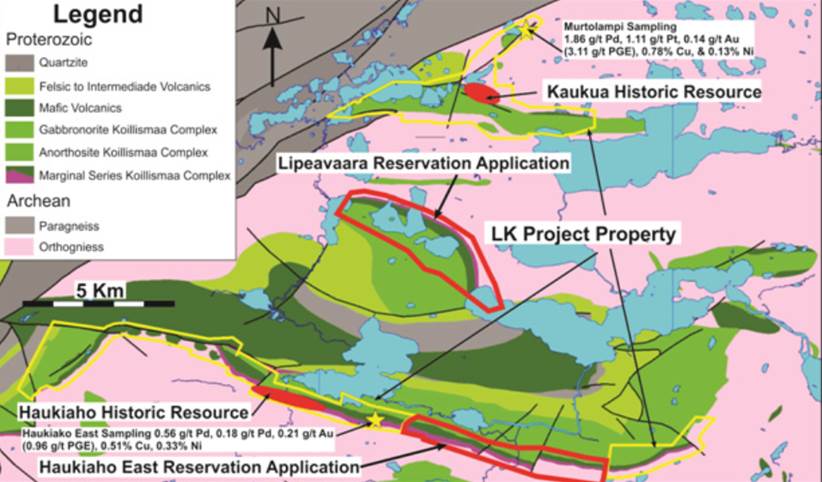 Last year the company published the first (maiden) NI 43-101-compliant resource at Kaukua, putting Palladium One on track for developing an open-pit PGE-Ni-Cu mine in Finland.

Along with the above-mentioned exploration updates, PDM also announced an important financial-news tidbit that will be of interest to investors and potential acquirers. On Jan. 9 the company said it has entered into a binding letter of intent (LOI) to buy back the 2% net smelter royalty (NSR) that had previously been granted to Nortec Minerals, on the Haukiaho deposit.

Under terms of the royalty purchase agreement, Palladium One will issue Nortec 375,000 shares and pay $50,000 cash, after which Haukiaho will be royalty-free – meaning PDM has 100% control over its production with no royalty payment obligations.

“Buying back the existing royalty on Haukiaho eliminates a dilutive overhang on the project while also providing future optionality,” Weyrauch explained in the Jan. 9 news release.

At AOTH, we are very pleased to see Palladium One delivering four solid news releases in January alone – a great start to 2020.

There is excellent progress being made at both LK in Finland and Tyko in Ontario, setting up what looks to be an exciting exploration season including drill results.

We see a lot of “smoke” behind what could be a roaring “fire” of mineralization at Smoke Lake. The elevated nickel and copper soil sample values, occurring overtop of the EM anomaly, give us a high level of confidence that something of value will be identified with the drills.

In Finland we can’t wait to see what the IP survey shows at Haukiaho, a known mineralized zone that comes with a lot of data from a historical resource estimate.

How much more mineralization is the IP survey likely to find? Then there’s the upcoming 5,000m drill program, likely to build additional ounces, on the way to a fresh resource estimate at Haukiaho.

We especially like the fact that Palladium One is no longer obligated to pay a 2% NSR at Haukiaho. It’s good to see the company wipe this off the books early in the development of the project. It now has the NSR in its pocket should it choose to sell it at a later stage, providing additional funding. And it looks good to a potential acquirer, that there is no existing third-party NSR obligation.

Palladium One is cashed up with CAD$3.78 million raised from a private placement, including a $1.2 million investment from Eric Sprott. Work programs are in place, with a shed-load of more news to come.

Richard owns shares of Palladium One (TSX.V:PDM), PDM is an advertiser on his site aheadoftheherd.com