In January 2020, PDM commenced an induced polarization (IP) survey, designed to zero in on shallow zones of conductivity, containing higher sulfide concentrations. These zones were drill-tested with close to 4,500 meters of diamond drilling.

Of note, Haukiaho hosts the highest nickel grades on the LK project, with potential for a large, bulk tonnage deposit. The 2013 Haukiaho resource used a very low cut-off (0.1 g/t Pd), was not pit-constrained, and encompassed widely spaced drilling, with an apparent focus on maximizing tonnage, not grades. No PGE assays were conducted. As a result, based on the previous work conducted at Haukiaho, an opportunity exists to increase grade and known mineralization.

“It appears that the Haukiaho trend hosts significantly more mineralization than outlined in the historic 2013 Haukiaho resource estimate. The fact that we have two large chargeability drill targets located immediately to the east of the historic resource suggests significant potential to outline additional mineralization along the Haukiaho Trend. As a result, not only do we plan to convert the 2013 historic resource into a current NI43-101 resource estimate following infill drilling, we have the opportunity to significantly expand mineralization to the east,” Derrick Weyrauch, President and CEO, said in the May 7 news release.

On May 26, PDM reported a large chargeability drill target at Haukiaho East, located within a 200m-wide drilling gap, hosted within the 2013 resource estimate. Until now, this newly identified chargeability anomaly had only been tested by one historic diamond drill hole, which did not intersect the core of the anomaly.

As a result of the covid-19 outbreak, in March the company suspended its H1 2020 exploration program at the LK project. Drilling resumed in August, with a focus on expanding known mineralization.

All three holes were designed to expand higher-grade zones at Haukiaho, and in the case of LK20-010, to test the large chargeability anomaly described above at Haukiaho East. 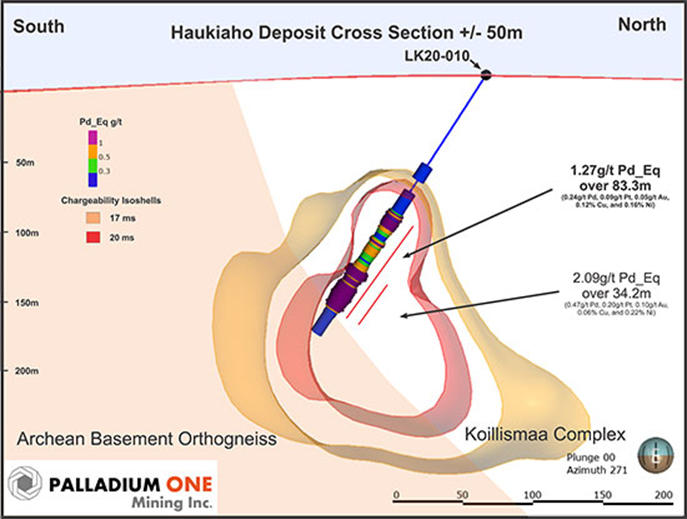 The mineralized interval for LK20-008 is likely wider than reported, according to Palladium One – initial sampling ended in mineralized quartz-albite footwall. Additional sampling is currently underway. Hole LK20-009 intersected a thick diabase dyke shortly after the hole entered the mineralized zone, resulting in only partially testing the zone.

With these results in hand, especially for LK20-010, Weyrauch believes that drilling to target higher chargeability areas could discover wide zones of higher-grade mineralization.

Moreover, since the company has found a wide interval in an area that had not been tested, there is potential to increase the 2013 Haukiaho resource area (represented by the red circles in the figure below). 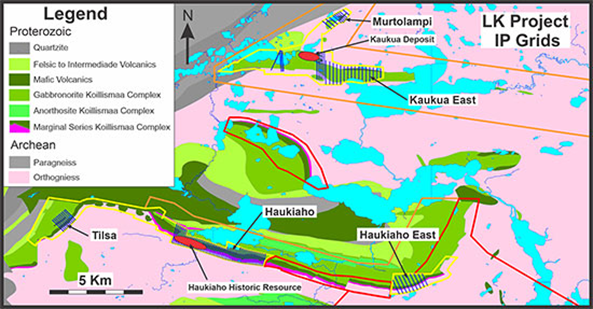 The consistency of the company’s IP surveys is telling. So far this year, in the three IP survey grids totaling 7.5 km of strike length conducted along the Haukiaho Trend, each was able to identify chargeability anomalies.

The Haukiaho Trend encompasses over 17 km of favorable basal contact, of which the 2013 Haukiaho resource only occupies some 1.5 km of strike length.

The first phase of drilling at LK, which resumed in August with the Kaukua South and Murtolampi zones in the greater Kaukua area, was completed earlier this month for a total of 4,490m completed in 26 holes, with results still trickling in.

Like with Haukiaho, drilling at Kaukua South was to test the eastern extension of the greater than 4-km-long chargeability anomaly identified from the earlier IP survey.

This result was important as it confirmed the existence of near-surface palladium-rich sulfide (PGE-Cu-Ni) mineralization and suggested significant additional open-pittable mineralization remains to be delineated in the greater Kaukua area.

Geologists think the deposit is a “basal Cu-Ni-PGE bearing sulfide accumulation within the larger Koillismaa Layered Mafic Intrusion” that is part of an intrusion belt that runs east-west across Finland and into neighboring Russia. 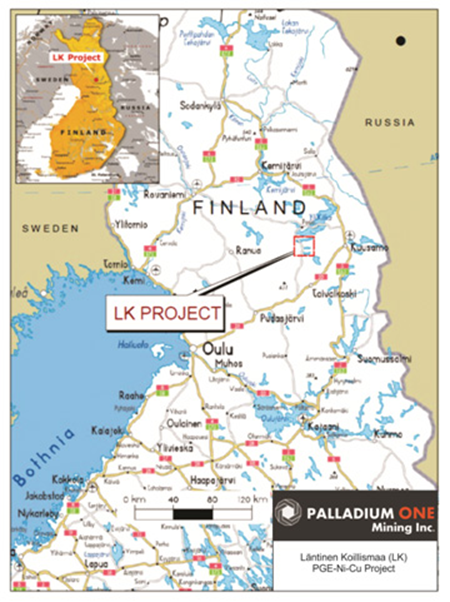 The exploration permit applications — covering a grand total of 2,485.3 hectares — are divided into two groups: the Kaukua Group consisting of the Kaukua and Murtolampi targets mentioned above and the Haukiaho Group covering the Lipeävaara and Haukiaho targets as well as Salmivaara, which represents the eastern and western extension of Haukiaho.

This project draws comparison with the Platreef type deposits of the Bushveld Igneous Complex in South Africa, the largest layered igneous intrusion within the Earth’s crust. It is also where most of the world’s platinum is produced.

Surface sampling and previous drilling have shown evidence of palladium, platinum, gold, copper, cobalt and nickel.
Last year Palladium One published the first (maiden) NI 43-101-compliant resource at the Kaukua target, putting the company on track for developing an open-pit PGE-nickel-copper mine in Finland.

Palladium One wishes to add multiples of the existing Kaukua resource in the Kaukua South area, which adjoins Kaukua, as well as to update/ increase the resource estimate at Haukiaho.

And it appears the company has done just that. In a news release Tuesday, Palladium One said drilling at Kaukua South has extended magmatic sulfide mineralization by more than 3 km east of hole LK20-006, which returned 63.4m at 1.88 g/t Pd_Eq. Because historical drilling returned 33m @ 1.9 g/t Pd_Eq 600m west of the hole, that means a new strike length of about 4 km – a more than six-fold increase from the previous 600m-long strike. 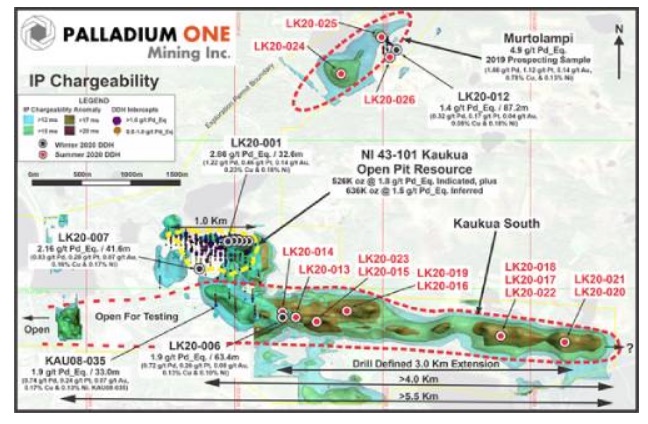 According to the company, preliminary indications are that Kaukua South could be several times the size of the 2013 resource at Kaukua that delineated 1.1 million Pd_Eq ounces of Indicated and Inferred resources.

“We are very excited to report this major new discovery, and are processing assays on a rush basis,” said Derrick Weyrauch, President and Chief Executive Officer.

“The Kaukua South strike extension is exceptionally significant because it has shallow disseminated sulfide mineralization the same as Kaukua and points to the footprint of a large-scale mineral system,” said Dr. Peter C. Lightfoot, one of Palladium One Mining’s directors and a globally recognized expert in magmatic precious metal and nickel-copper-cobalt sulphide ore deposits. Dr. Lightfoot also stated, “LK is shaping up to potentially be the largest palladium dominant open pit project in a best in class mining jurisdiction, globally.”

Planning for a Phase 2 drill program at Kaukua South is underway, where drilling wil take place on 100-meter spacings along the new 4-km strike.

Richard does not own shares of Palladium One (TSX.V:PDM). PDM is a paid advertiser on Richard’s site aheadoftheherd.com