Palladium One acquires property next to Finnish PGE play

Palladium One (TSX-V:PDM) has significantly increased the exploration potential at its LK platinum-group element (PGE) and base-metal project.

Vancouver-based PDM announced this week the acquisition of the 20,000-hectare Kostonjarvi (KS), which is adjacent to the company’s flagship Läntinen Koillismaa (LK) project in north-central Finland.

At LK, and now KS, Palladium One is pursuing PGEs, copper and nickel. The LK project’s nine exploration permit applications all feature mineralized zones.  The focus at LK is to vector into more thicker embayment like structures using geophysics to de-risk drilling.  Management describes LK as more of a farming exercise given the extent of known mineralization, their plan is to build (harvest) resource tonnage via a conventional systematic drilling process given the nature of the LK system.

The addition of KS brings the company’s total land package in Finland to 32,226 hectares, including nine permits, three reservations and two reservation applications. Permission has been granted for exploration to be conducted on eight permits. 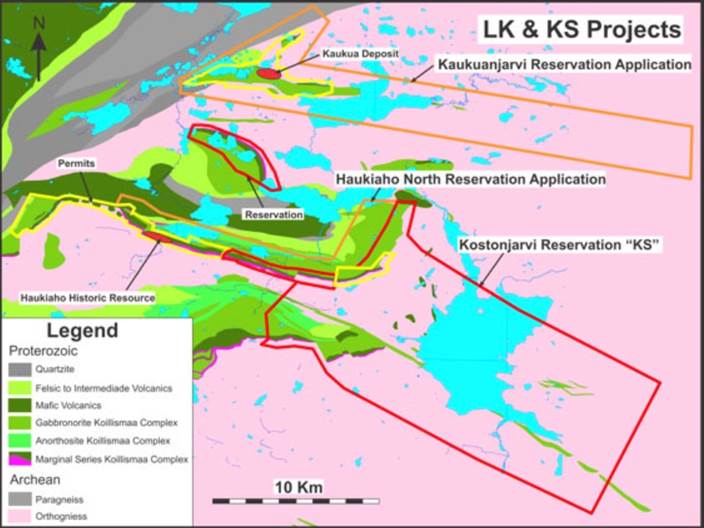 According to the April 2 news release, while the two properties are contiguous, KS differs from LK in that KS is an underground target, with high-grade massive sulfide potentially similar to the giant Voisey’s Bay nickel deposit in Labrador, Canada and the Norilsk-Talnakh in Russia; whereas LK is an open-pit-style deposit, featuring disseminated sulfide mineralization along the prospective basal unit of the Koillismaa complex, with similarities to Platreef South Africa. , Platreef and Norilsk are the largest known nickel-copper-palladium deposits in the world.

(In 2018 Brazil’s Vale, the world’s largest nickel producer, announced plans for a 15-year minelife extension at long-running Voisey’s Bay, by expanding an underground deposit. The US$2 billion project is expected to be financed through a $690 million cobalt streaming deal with Wheaton Precious Metals and Cobalt 27 Capital.)

Obtaining KS is of interest to PDM shareholders, because it covers a large gravity and magnetic anomaly that is thought to represent a “feeder dyke” to the Koillismaa Complex, which hosts the palladium-dominant LK project.

Feeder dyke is a geological term that describes a conduit for magma to flow, carrying minerals that become mineral deposits.

Palladium One describes the exploration targets at KS as “traps” in the buried feeder dyke, that potentially host massive sulfide mineralization. As for how KS connects to LK, the news release explains:

The Feeder Dyke begins at the ultramafic Narankavaaara intrusion and then dives to a depth of 3-5km before coming near surface again where it’s interpreted to connect to the Koillismaa Complex.

While magnetic, gravity and seismic surveys have been conducted to try and model the feeder dyke, little exploration has been done.

The KS project covers the western one-third of the buried Feeder Dyke anomaly where it has been modelled to shallower depths and is interpreted to eventually connect to the Koillismaa complex (Figure 1, 3 and 4).

Neil Pettigrew, Vice President Exploration, commented, “The KS project is a unique opportunity to leverage robust academic studies to discover massive Cu-Ni-PGE sulphides contiguous to our existing flagship LK project. The tenor of the LK project’s disseminated sulphide mineralization is very high, if massive sulphides can be located with similar tenor, then the in-situ value of this mineralization could be very substantial.” 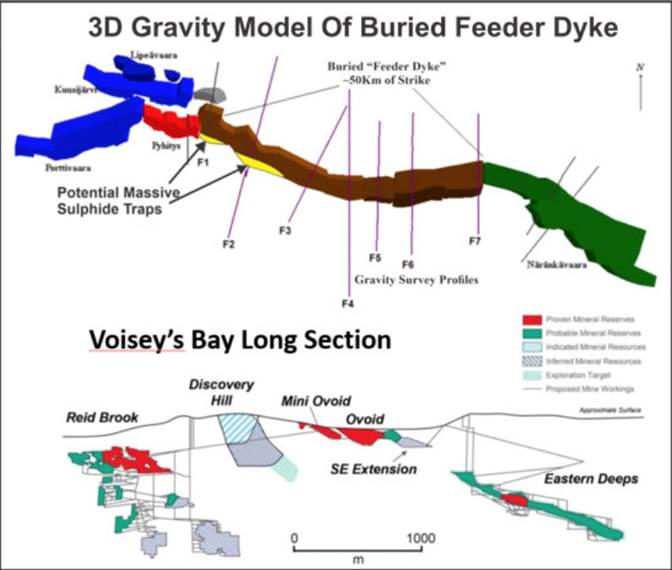 Figure 2. 3D model of the buried connector dyke (modified from Salmirinne and Iljina 2003) and schematic long section of the Voisey’s Bay deposit 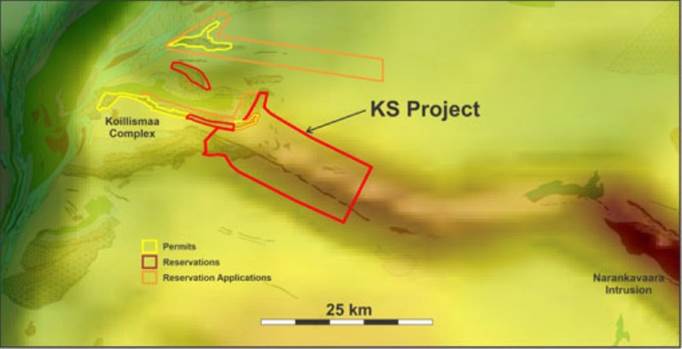 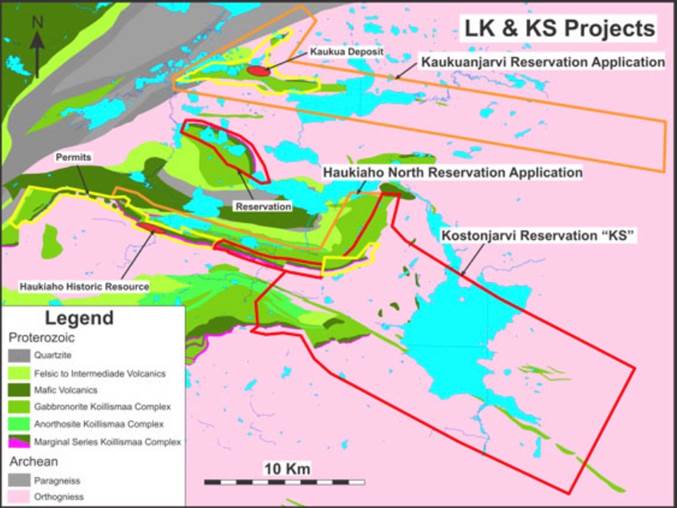 Last year Palladium One published the first (maiden) NI 43-101-compliant resource at the Kaukua target, putting the company on track for developing an open-pit PGE-nickel-copper mine in Finland.

Palladium One wishes to add at least a million more ounces of palladium-equivalent resources (Pd_eq) to the Kaukua optimized pit resource.

In January PDM commenced an induced polarization (IP) survey, designed to zero in on shallow zones of conductivity, containing higher sulfide concentrations. These zones will then be drill-tested with up to 5,000 meters of diamond drilling.

In its Feb. 25 news release, Palladium One says initial results from the first grid, Kaukua East, have discovered a large chargeability anomaly. Finding the anomaly, which is indicative of underground mineralization, means the palladium-dominant Kaukua South Zone now extends over a 2-km strike length.

“Significantly, the chargeability anomaly on the new Kaukua East survey appears to be more intense and wider than the one on the 2008 survey, making it a very high priority drill target,” President and CEO Derrick Weyrauch stated.

As Palladium One notes, the company now has two significant projects in Finland with the potential for large mineralized systems, similarities to Platreef and Norilsk/ Voisey’s Bay-type deposits.

Palladium prices, like gold prices, have held up well despite widespread market convulsions due to the coronavirus pandemic. 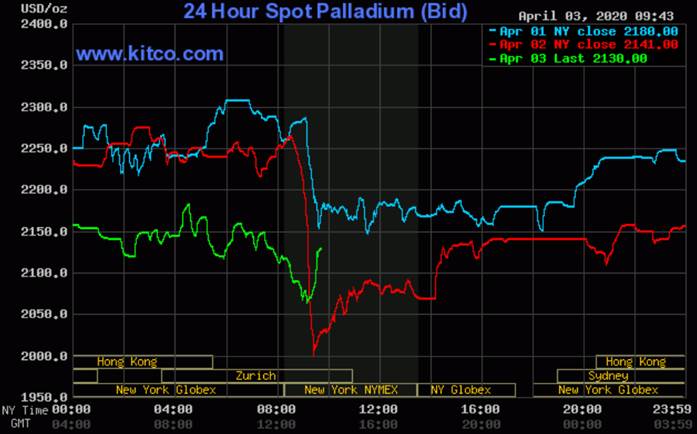 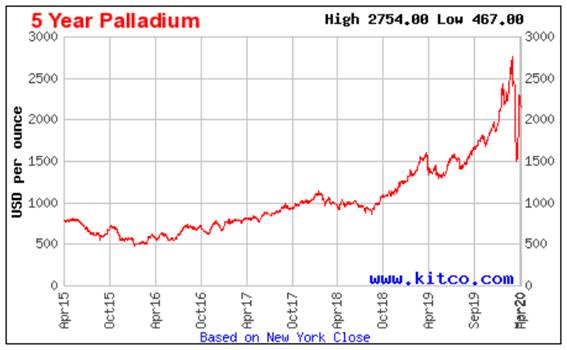 This bodes well for explorers like PDM whose deposits contain significant amounts of palladium, as well as nickel and copper, which are also required by electric vehicles and their lithium-ion batteries.

We look forward to more news flow regarding LK, and are curious to see what Palladium One is planning to do with KS.

As of March 31, the company’s treasury sits at $2.6 million, which should be more than enough for a 2020 exploration program involving one or both properties.

As a result of the Covid-19 outbreak, the company did announce the suspension of it’s H1 2020 exploration program.  In total the Company drilled 2,000 meters of the 5,000-meter planned program.  Results from both the extensive geophysics program (IP and Mag) are still pending and therefore additional news-flow is expected.

Richard does not own shares of Palladium One (TSX.V:PDM), PDM is an advertiser on his site aheadoftheherd.com