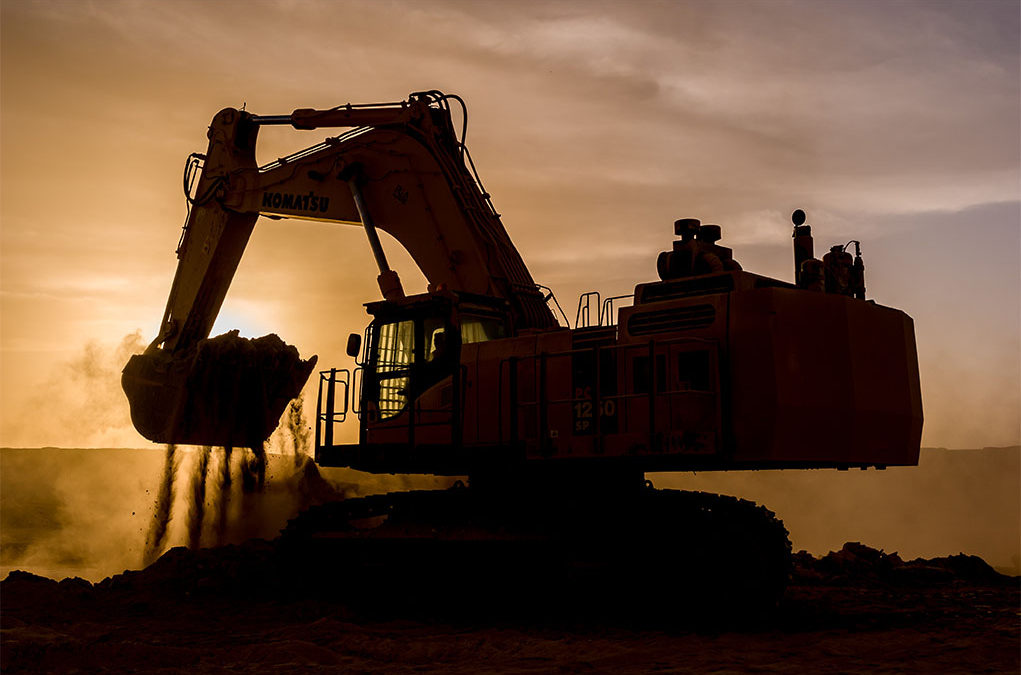 The company formerly known as Boreal Metals is exploring this property with 30 historic mines including Östra Silvberg, at one time the country’s largest silver mine.

On Nov. 16, Norden Crown announced an initial 2,500 meter diamond drill program at its Östra Silvberg prospect, located on the Gumsberg license, in the Bergslagen province of southern Sweden.

The program’s objective is to expand the Main Zone and the newly discovered South Zone, via down plunge and step-out drilling.

“We are thrilled to continue testing the new Östra Silvberg South discovery and to continue the expansion of its high-grade silver-zinc-lead mineralized zones,” said CEO Patricio Varas, in the Nov. 16 news release. “Drilling completed to date on this zone has returned consistent high-grade intercepts from below surface to roughly 250 meters and remains open at depth and along strike. We cannot wait to see what further delineation drilling may deliver in this campaign.”

Norden Crown’s Gumsberg volcanogenic massive sulfide (VMS) project is an 18,300-hectare land package with five exploration licenses. The property was mined from the 13th century through to the 1900s, with an astounding 30 historic mines on the property including Östra Silvberg — the largest silver mine in Sweden from 1250 to 1590. Twenty-one holes were drilled between 1939 and 1958. 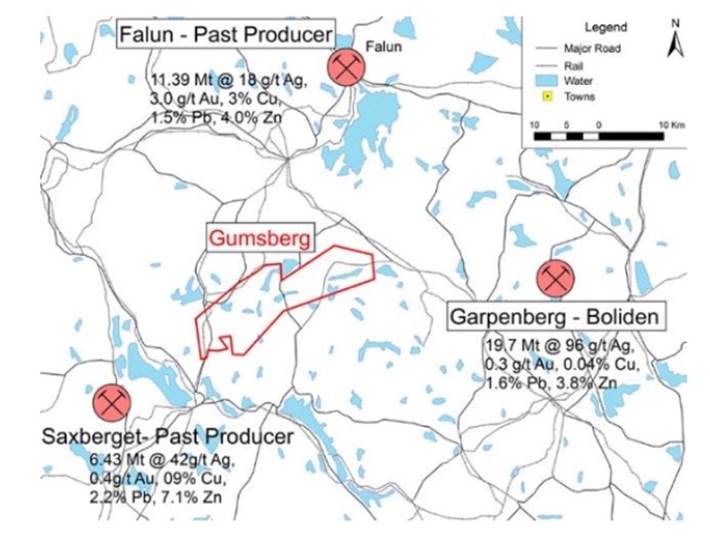 The geological theory Norden Crown is operating under, is that the high-grade zinc-silver grades they are finding, are re-mobilized mineralization that precipitated out of the rocks as they were squeezed during Metamorphism millions of years ago.

The company has delineated steep “chimney-like structures” at Östra Silvberg that are analogous to the orientation of the deposits found at the nearby Garbenberg mine, some of which go as far as a kilometer deep.

In early 2018, while drilling under the Östra Silvberg mine, Norden Crown drilled a hole that was so high-grade, the area demanded further investigation. The hole returned about 22% combined lead-zinc, plus well over 600 grams per tonne silver. “In terms of value it’s over $800 per tonne material, or higher,” Varas said in a 2019 AOTH video interview.

Significantly, two of the four holes drilled at Östra Silvberg South intercepted unmapped mine workings that plunge deeper than expected and further east than indicated by historical maps — suggesting that the mineralization is more extensive than previously thought.

In addition to the start of 2020 drilling at Östra Silvberg’s Main and South zones, Norden Crown has been making good progress at Fredriksson Gruva, a past-producing mine in southern Sweden originally discovered in 1976.

Fredriksson Gruva is one of the four prospects located at Norden Crown’s Gumsberg project and is the latest to reach the drill-testing stage.

Based on historical drilling data and 3D modeling, the company has identified a series of targets, to be the focus of an upcoming drill program.

Exploration on the property carried out during the 1970s included surface trenching, sampling and nine diamond drill holes, which identified precious metals-enriched base metal mineralization.

Test mining conducted by AB Statsgruvor, a state-owned mining company and the project’s previous owner, in 1978 produced 21,000 tonnes grading 53 g/t Ag, 5.13% Zn and 1.7% Pb from an open pit. An additional 11 holes were drilled in 1979 to test the down-plunge extent of mineralization.

Also during this period, four holes were drilled and a core re-logging program was completed. Surface trenching and a magnetic geophysical survey were also done.

Norden Crown acquired the Fredriksson Gruva prospect as part of a larger staking acquisition in March 2017. This licence is referred to as “Gumsberg West“ and forms the western half of the Gumsberg project.

According to data recently compiled by Norden Crown, a total of 29 historical holes (3,935 meters) have been drilled to date at Fredriksson Gruva to an average depth of 135 meters.

Drilling has penetrated to 300 meters below surface, though most of the holes are concentrated between surface and a 100-meter depth. Past drilling has defined significant silver-zinc-lead mineralization over an area measuring 300 meters (east-west), 200 meters (north-south) and 300 meters vertically (see figures below). 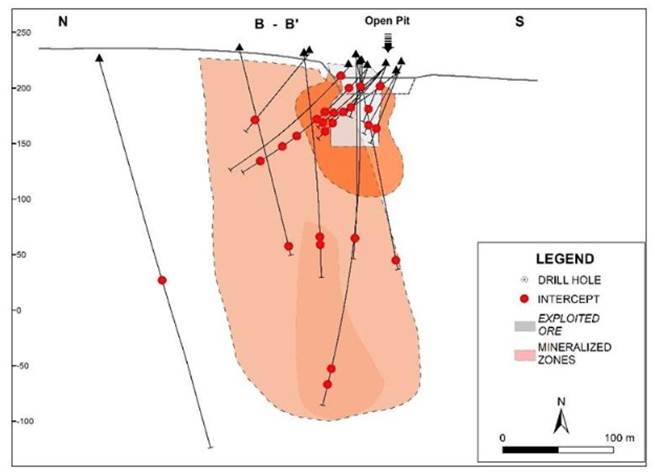 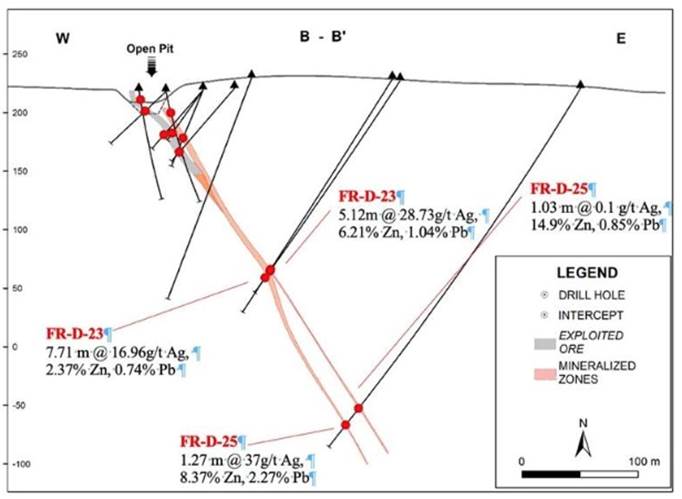 Historical open-pit and underground mining has removed mineralization in the top 91 meters of the deposit. Mineralization at Fredriksson Gruva extends for a minimum of 200 meters below the historical workings and is open in all directions.

Norden Crown has said it will use this historical data as a guide for its future exploration programs.

Apart from the past mining success at Fredriksson Gruva, a big reason why the company has committed to advancing this prospect is due to its resemblance to the famous Broken Hill ore deposit found in New South Wales, Australia.

Named after the town on which the deposit is situated, Broken Hill is widely considered the world’s richest and largest zinc-lead ore deposit.

The deposit is believed to be more than 1,800 million years old of the Proterozoic age. No other major sedimentary exhalative (SEDEX) lead-zinc deposits of this style are currently known from the Phanerozoic or Archean age.

The geology of the Broken Hill ore body is a series of boomerang-shaped, highly sheared and disrupted, ribbon-like and poddy (elongated, lens shaped) massive sulfide lenses that outcrop in the central section (hence the name “Broken Hill”) and then plunge steeply north and moderately south.

According to Varas, the alteration minerals and lead-zinc-silver mineralization found at Fredriksson Gruva reminds him of these Broken Hill-type (BHT) Pb-Zn-Ag deposits.

And that could happen fairly quickly. This week the company announced the receipt of two key permits — one for exploration, the other for off-road driving — allowing a diamond drill program at Fredriksson Gruva to move forward.

“Fredriksson Gruva is a very intriguing prospect because historical mining only exploited ore from the top 100 meters, but a few historical holes demonstrate high grade silver-zinc-lead mineralization extends at least 400m below surface” Varas stated in the Dec. 9 news release. “3D modelling based on the historical data suggests the mineralization forms an antiform or inclined saddle shape that plunges a significant distance. The fact that there are no drill holes between the outlying intercepts and the mine workings excites the technical team as the mineralization remains open at depth and potentially along strike where continuity may not have been recognized by previous operators. We are pleased to be in a position to drill this wide-open prospect and feel we can leverage the critical mass of historical data.” 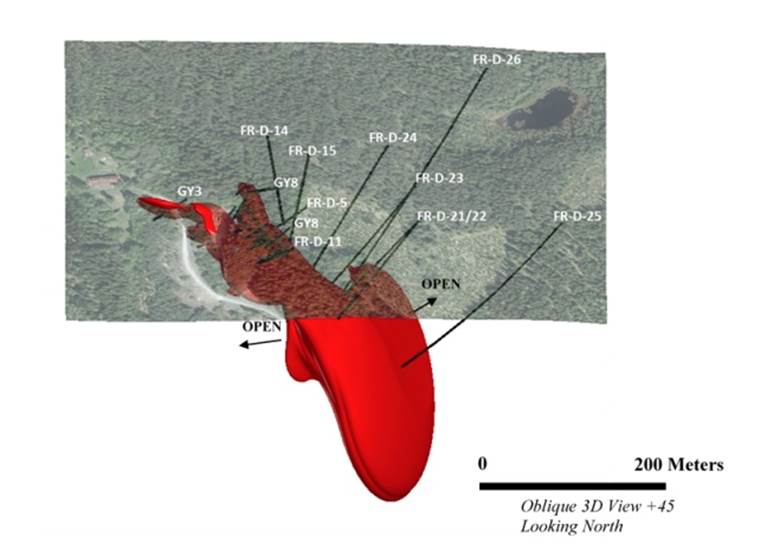 Oblique 3D interpretation of mineralization at Fredriksson Gruva. Note that the mineralization is interpreted to extend beyond the limits of historical drilling at depth and laterally.

At Gumsberg, Norden Crown has rich base-metal content and a precious metals kicker. Usually when gold and silver prices are up, the economy isn’t doing so well and base metals prices are down. The reverse happens during economic booms. This makes a VMS mine a winner during all economic cycles. They also have scale. A junior that comes upon a VMS deposit will be the belle of the ball as far as attracting mining company suitors looking for a partner, a property, or an acquisition, since a VMS mine can produce high metal volumes for many years.

We love the Gumsberg project, especially its high silver grades. The company has re-commenced drilling this property, that has 30 historic mines including Östra Silvberg, at one time the largest silver mine in Sweden.

There appears to be a lot of blue-sky potential south of the old mine workings. Previous exploration in the South Zone returned multiple high-grade intercepts including 10.94 meters of 656.7 g/t silver, 16.97% zinc, 8.52% lead and 0.76 g/t gold.

On the western half of the Gumsberg property, things are starting to happen at Fredriksson Gruva. What is remarkable about this target, is the consistency of grades being found at surface and at depth. Remember, Test mining from an open pit where these zones reach the surface produced 21,000 tonnes grading 53 g/t silver, 5.13% zinc, and 1.7% lead. Subsequent underground mining production down to 91 meters produced and additional 45,000 tonnes grading 49 g/t silver, 5.77% zinc, 1.84% lead.

In mining, it often happens that there are low grades at or near surface, but enough ore exists at economic grades to dig an open pit. Higher grades frequently are found deeper underground, and can be accessed later. But here, the grades are consistently good — silver is found at 53 g/t at surface and 49 g/t 91 meters deep. The zinc and lead grades are also practically identical at surface and at depth. This is very good news for Norden Crown and its shareholders, because with such consistent grades, it shouldn’t take long to build ounces/ tonnage.

We’re expecting plenty of news flow as Norden Crown progresses its drill campaign at Östra Silvberg South, and gears up for a brand new drill program at Fredriksson Gruva, now that it has received the required permits.