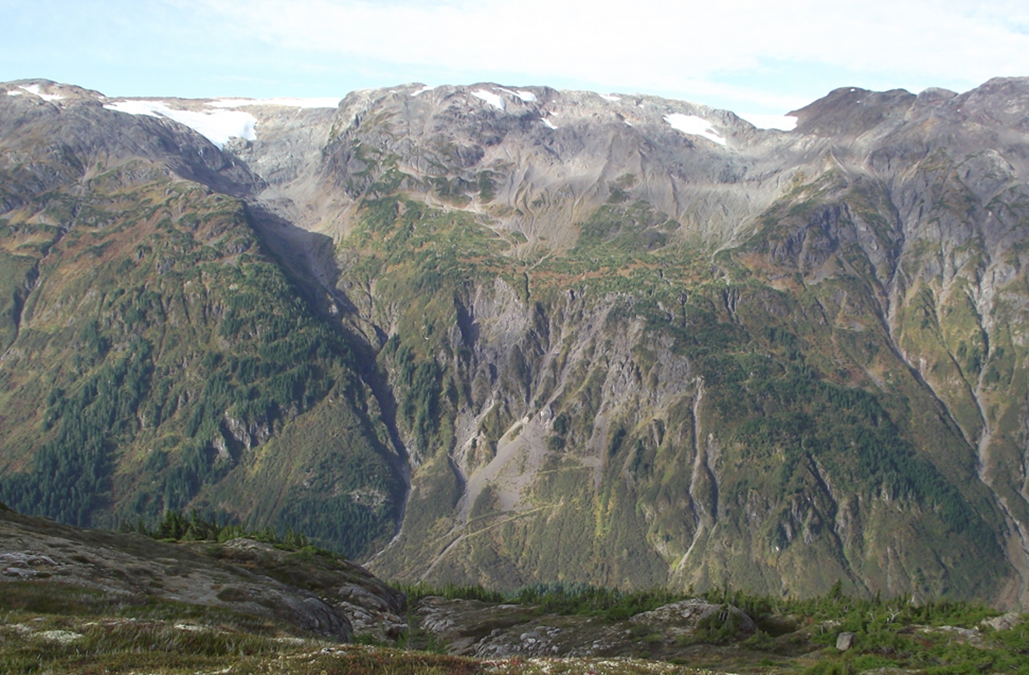 While assay results are still pending, the initial observations are very promising. Sulphide minerals including argentite, acanthite, tetrahedrite, tennantite, galena, chalcopyrite and sphalerite have been seen in drill core from all four target areas.

Presence of silver-bearing minerals in the widely distributed targets is “highly encouraging” with potential for size in the system, the company said. Arrangements have already been made to resume drilling as soon as next season.

The first phase of drilling on the American Creek project focused on testing the extent of the epithermal-related silver and base metal mineralization associated with property-wide veining and vein breccia. 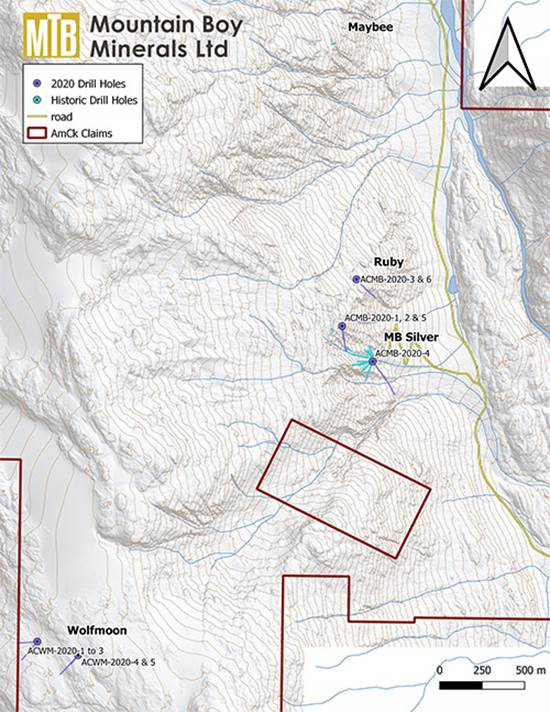 The target area to be drilled on the property was the Wolfmoon zone, where select grab samples from 2019 and geophysical anomalies from the 2020 IP survey concurrently occur. Five holes were drilled; mineralization consisting of galena, chalcopyrite and sphalerite was observed in quartz veins in drill core.

Three holes were drilled targeting the MB Silver high-grade zone, where kilogram silver values were drilled back in 2006. Two of the three holes intersected the zone, with the third failing to reach its target depth due to bad ground conditions. The two holes that intersected the high-grade zone extended the known mineralization over an additional 81 metres along strike.

Significant mineralization was also encountered in the new Upper Ruby zone located 430 metres north of the MB Silver zone. This zone was discovered in September when the company was exploring the Dorothy target area. Based on the observed mineralization and the trend of the veining, the geological team at Mountain Boy decided it was a meaningful drill target. 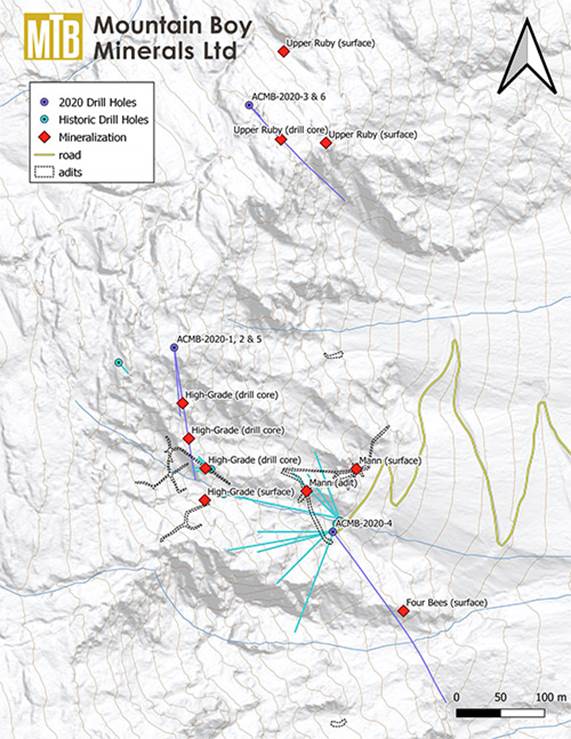 The drill hole intersected silver-bearing sulphides at Upper Ruby, which has been traced for 115 metres on surface and 52 metres into the hill. The geological team believes the mineralization is similar to the high-grade zone drilled in 2006 and is either an extension of this zone or a separate but related parallel zone located below.

The Four Bee’s zone, previously thought to be the Franmar zone, was targeted using a track-mounted drill from the MB Silver road. Although mineralization occurs in this hole, it is believed the drill hole paralleled the zone and hole failed to adequately test it. A helicopter supported drill pad exists for this targeting this zone next season, which is better located for testing this zone.

“We know this geological system carries high grades: We see that in the historic workings, in the surface showings and from the 2006 drilling. Initial review of the core shows that there is also potential in the system for size. We are already making arrangements to re-start the drilling as early as possible next season.”

The company now eagerly awaits assays from these 10 drill holes. This data will be compiled and modeled together with the new 3D IP geophysical data, structural data derived from the LiDAR survey and surface and subsurface lithological and hydrothermal alteration data to refine a comprehensive exploration model.

The American Creek project is situated in the renowned Golden Triangle area of the Skeena mining division, about 22 km north of Stewart and 7 km from Highway 37A.

Several world-class deposits exist around the project area, including the historic Premier mine 11 km to the southwest and the Big Missouri mine 3 km to the west. The former was once the largest gold mine in North America, producing 2 million ounces of gold and 45 million ounces of silver.

The historic Eskay Creek mine — which went on to become Canada’s highest-grade gold mine and the world’s fifth-largest silver producer — is also part of the Golden Triangle.

Despite more than 150 years of rich mining history, many parts of the Golden Triangle remain largely untouched by humans. A combination of factors, including low gold prices and a lack of infrastructure, caused the area to become dormant for decades, with many gold mines being forced to shut down during the 1990s.

But things have changed over recent years, with the next wave of gold explorers in the area looking to take advantage of a resurgent gold market and the promise of new exciting discoveries in the modern era.

Recognizing the region’s immense mining history and its unexplored potential, Mountain Boy and its predecessors began picking up claim areas around the historic Mountain Boy mine beginning in the early 2000s.

In an interview with Ahead of the Herd, Mountain Boy chief executive Lawrence Roulston, who already worked in the industry for 40 years with junior miners and several major companies, reveals why he could not turn away from such an opportunity:

“I saw Mountain Boy and the enormous potential of its properties, and I was really keen to get involved. So, I took control over the company and gathered a really exceptional geological team.” 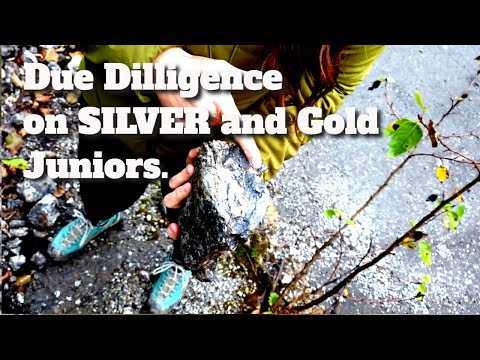 “The Golden Triangle is exciting because it has yielded several world-class deposits. It’s an area that’s extremely well endowed with silver, gold, base metals. People continue to have success exploring in the area now,” Theny tells AOTH.

The Next Premier Discovery?

Mountain Boy has accumulated a significant land package in what is known as the American Creek corridor. The entire project area has favourable host stratigraphy, including rocks from the Lower to Middle Jurassic Mount Dilworth formation and Lower Jurassic Hazelton Group.

The company considers this corridor to have “real potential” to host one or more deposits, pointing to the presence of numerous nearby past producers including Premier and encouraging discoveries over recent years. The large, continuous regional and property scale faults, folds and shear zones are often related to mineralization in the region. 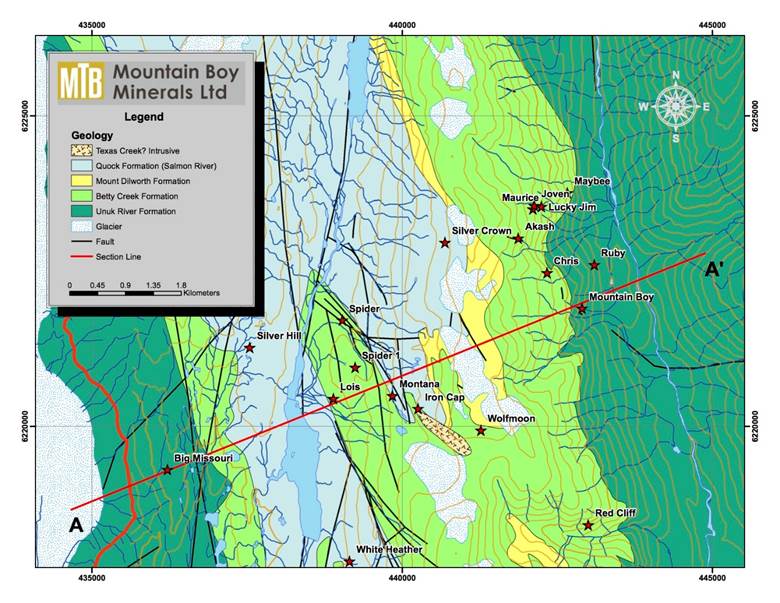 The company’s exploration breakthrough came in 2018, when Theny and her team carried out the first systematic exploration along the American Creek valley, resulting in a few findings including dykes.

“Those dykes were interesting to us because we thought that they might be related to the Texas Creek plutonic suite,” explains Theny. This plutonic suite is known to be associated with important vein deposits like the old Premier gold mine.

To confirm the significance of these intrusive dykes, Theny and her team went back in 2019 with a much more significant mapping and sampling program. A soil grid was put over the gossanous rocks, which later resulted in gold and copper anomalies. 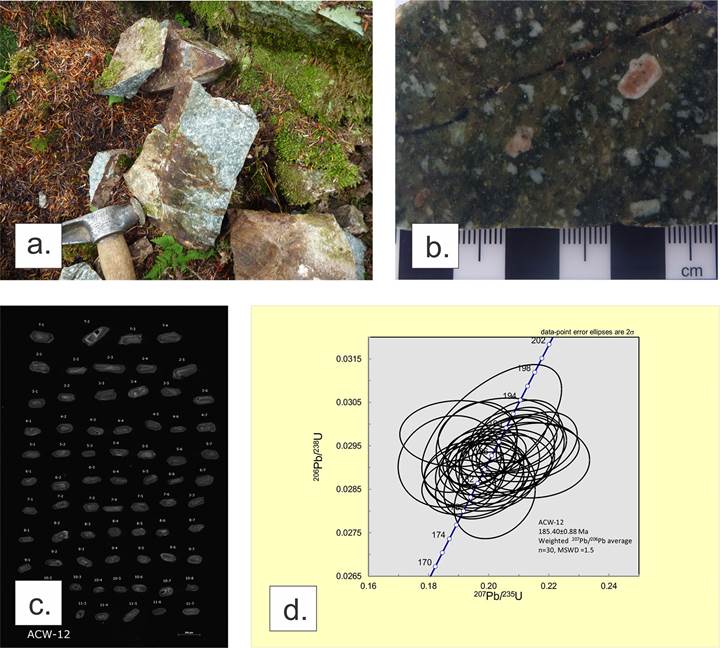 ‘The beauty of that soil grid was it led us to what we now call the American Creek intrusion,” says Theny. “You’d hold it up and you’d say wow, that could have come straight out of the Premier porphyry.”

With this year’s drilling campaign drawing to a close, Mountain Boy is now looking forward to the spring of 2021, when drilling is scheduled to restart.

With three distinct target areas as well as a newly discovered zone, CEO Roulston believes that “any one of these can be a company maker.”

To prepare for its next phase of exploration at American Creek, the company wasted no time in announcing a private placement of units for gross proceeds of just over $1.67 million. These units are priced at a 50% premium over the existing common share price, an indication of market interest.

“More targets will be worked on in the coming months,” Roulston affirms, as his company wants to demonstrate that this is a district-scale project exactly like the Premier, where multiple high-grade deposits lie over an extensive area.

Two of the targets on the property are likely there because of an intrusive heat source discovered to be Early Jurassic. This is a good sign that it is onto something big.