Mining Hall of Famer appointed to Rockridge technical advisory board

In junior mining, having deep expertise at the management and board level can be worth its weight in gold, or in this case, copper. Many a junior has embarked on the long, hard and expensive journey of developing a mine – even those with top-tier deposits – only to find the trip ends abruptly due to some insurmountable technical challenge, or a problem requiring so much extra funding to fix that the project must be shelved.

Experience is one of the basic tenets of due diligence that must be done in evaluating any exploration company, along with the strength of the property(ies), resources, grades, access to infrastructure, share structure, etc.

Fortunately for Rockridge Resources (TSX-V:ROCK), which recently started trading on the TSX Venture Exchange, they have it in spades. Led by President & CEO Jordan Trimble, a corporate financing veteran, Rockridge today announced that the company has established a technical advisory board and appointed Ron Netolitzky as its first member.

Those who follow Canadian mining will have heard of Netolitzky. An accomplished geologist, he is associated with the discoveries of three exceptional mineral properties that were put into production: Snip and Eskay Creek in British Columbia, and Brewery Creek in the Yukon.

Netolitzky’s first success came at Eskay Creek, which had a fruitless exploration history dating back to the 1930s. Seeing the potential, Netolitzky invested in Consolidated Stikine Resources, which held the rights, then teamed up with Calpine Resources to drill-test the prospect. Eventually, renowned Vancouver stock promotor Murray Pezim gained control of Calpine and half the deposit, but Stikine held out until Placer Dome and International Corona launched takeovers; Stikine employed Netolitzky as their technical person. He was also one of five controlling shareholders. The company was taken out for $67 per share in what has become one of the more famous transactions in Western Canadian mining history.

As President of Loki Gold, Netolitzky transformed the Brewery Creek project into an open-pit heap leach operation. Producing 200,000 gold ounces a year from 1996 to 2002, the project is currently owned by Golden Predator. An entity that Netolitzky created from the merger of Noki and Viceroy Gold would go on to acquire the Gualcamayo gold project in Argentina, sold to Yamana Gold in 2006.

At Spectrum Gold he obtained the rights to Galore Creek, a copper-gold-silver project in BC, and later merged Spectrum with NovaGold Resources. Newmont Mining acquired 50% of Galore Creek in July 2018 and formed a partnership with Teck Resources, who owns the other half. He was also chairman of Brett Resources which acquired the Hammond Reef gold project in Ontario later sold to Osisko Mining. His international experience includes helping to acquire the Segala gold deposit in Mali, and developing the Onca-Puma nickel deposit in Brazil.

Netolitzky will be providing his technical expertise to a management team at Rockridge that also has decades of mining experience under its belt. Head geologist Richard Kusmirski has been exploring North America for over 40 years, and specializes in Saskatchewan, the site of the Knife Lake project Rockridge is developing. He was previously Exploration Manager at Cameco, where he oversaw uranium exploration projects in the Athabasca Basin.

Director Jim Pettit has 25+ years of mining industry experience including as Chairman and CEO of Bayfield Ventures, which he sold to New Gold in 2014.

“I am excited to work with management and the geological team at the newly formed and well-structured Rockridge Resources,” Netolitzky said in a press release. “I have worked in the area around the Knife Lake Project and believe there is robust discovery potential there which the Company plans to test with its upcoming drill program.”

Under terms of the agreement, Rockridge can acquire the project by incurring exploration expenditures of C$3.25 million over four years, along with issuing 5,250,000 Rockridge shares and paying a total of $150,000 in cash.

Exploration picked up again in the 1990s, but ceased when metals prices dropped. A company called Leader Mining punched in 350 holes between 1996 and 2001, and published a resource estimate in 1998, consisting of 20.3 million tonnes grading 0.6% copper, 0.1 g/t gold, 3.0 g/t silver, 0.06% cobalt and 0.11% zinc. Within this shallow resource is a higher-grade zone of 11 million tonnes grading 0.75% copper in addition to other metal credits (The resource estimates are historical in nature and are not NI 43-101 compliant). 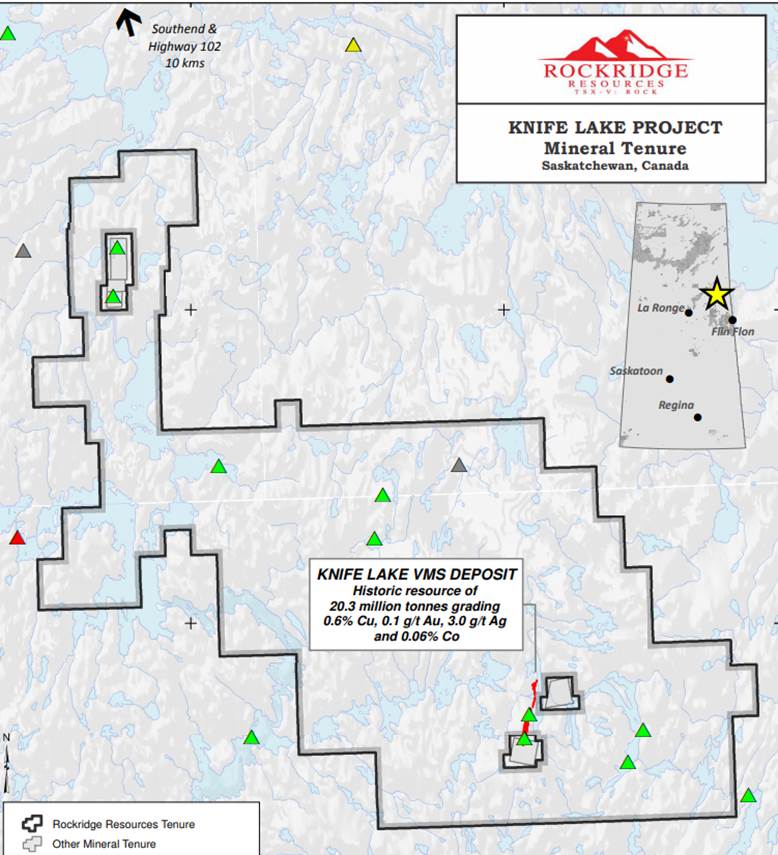 Of interest to potential investors is Rockridge’s tightly held share structure. Out of 23 million issued and outstanding shares, about 85% are held by insiders, management, funds and close associates, leaving only 3 million shares in the public float. The company currently has an enterprise value of roughly $4 million – which is low considering the potential of the project.

A $700,000 drill program to begin this spring will focus on confirmation drilling in the deposit area, as well as expansion drilling and some exploratory holes.

Rockridge is entering the market at the perfect time for a copper explorer, with demand forecast to outstrip supply as early as 2020. By 2034, the shortfall is expected to be more than 15 million tonnes.

While the copper price has lagged in recent months over fears of slowing Chinese growth and the US-China trade war, the market fundamentals are solid. Over 200 copper mines currently in operation will reach the end of their productive life before 2035. Most of the low-hanging copper “fruit” has been picked. New copper mines will be lower-grade and farther afield, meaning higher capex and production costs.

Demand for the “red metal” needed for construction (copper wiring), communications and transportation, is now being wired in, pun intended, to the electrification trend. Copper is an essential component of EVs. An average electric vehicle contains 85 kilograms of copper compared to 25 kg for regular vehicles.

That means copper demand is going to soar even higher than it already is.

Second, we are on the cusp of a major change in the copper market, where supply is not going to be able to keep up with demand. There are already signs. Copper stockpiles at London Metal Exchange warehouses are at a decade low. 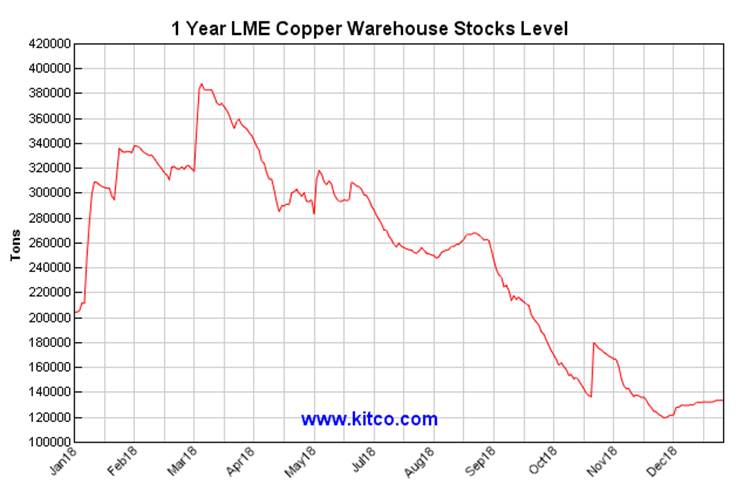 Another sign of trouble on the horizon for copper buyers, considering the price rise likely to result, is the shift to underground mining at Grasberg, the world’s second largest copper mine. Bloomberg reports that copper concentrate exports will drop 83%, and output will almost halve, as operations move from open pit to underground. That’s a plunge from an estimated 1.2 million tonnes last year to just 200,000t of concentrate, which will be smelted to make copper cathodes.

Every year copper analysts predict a flood of supply from copper mines overwhelming demand, but they fail to take into account the usual work stoppages due to strikes and “force majeures” from bad weather or other factors. Add that Chile is having water supply problems near the world’s largest copper mine, Escondida, and the fact that the South American nation has seen a 25% decline in copper ore grades over the last decade, and you can see why a coming deficit in the copper market is predicted. 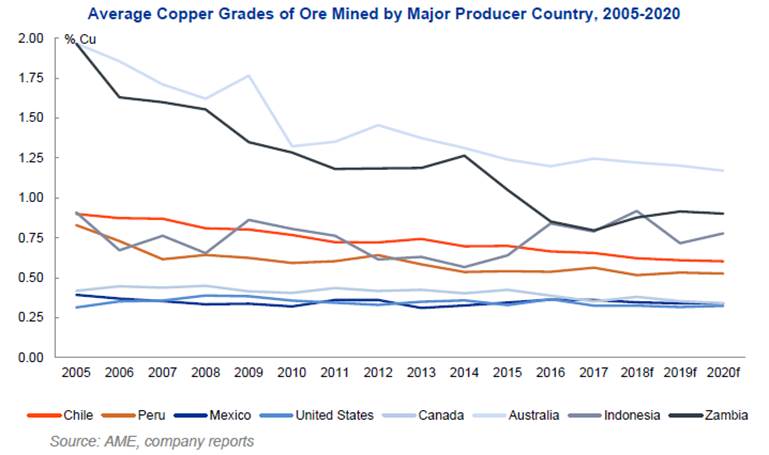 This, of course, will mean higher prices, and more interest in copper mining equities including juniors like Rockridge that can help bring more supply onstream.