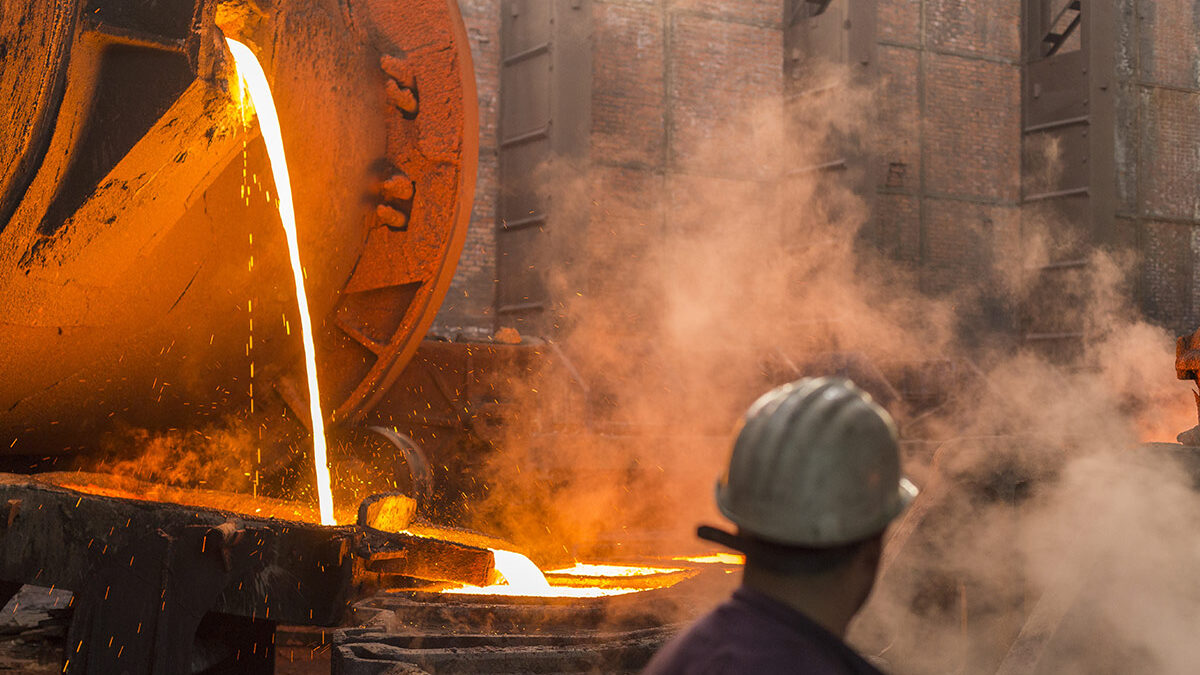 The global shift to renewable energy and electrification of the transportation system will inevitably require more copper than we have ever mined.

In 20 years, BloombergNEF says copper miners need to double the amount of global production – from the current 20mt a year to 40mt – just to meet the demand for a 30% penetration rate of electric vehicles.

This is a tough ask considering some of the world’s largest mines are seeing depleted copper reserves and lower ore grades, so it would be difficult for global production to even maintain a 20mpta pace.

Mining and metals consultancy CRU Group estimates that, without new capital investments, global copper mined production will drop below 12mt by 2034, leading to a supply shortfall of more than 15mt.

According to CRU, there are over 200 copper mines that are expected to run out of ore before 2035, with not enough new mines in the pipeline to take their place.

S&P Global Market Intelligence predicts that a production shortfall of 3.85mt could happen as early as 2025, due to diminishing supply from existing mines and rising demand for copper concentrates globally.

The solution, as simple as it sounds, is to have more copper projects that can be developed into producing mines.

S&P Global has identified 14 probable and 26 possible projects in the copper pipeline, though the firm admits it’s unlikely that all will come to fruition.

Even should many of these projects come online, they would likely just replace existing copper output and not contribute to supply growth. Therefore, a sustainable copper supply chain to meet future demand requires more discoveries than we’ve seen in recent years.

As of now, the global copper cupboard is quite bare. Over the past decade, greenfield additions to copper reserves have slowed dramatically around the globe, with tonnage from new discoveries falling by 80% since 2010, according to S&P Global.

Remember, for 20mt of additional metal must be delivered by 2040, the world needs the equivalent of one new Escondida mine (1mt annual production) each year for the next 20 years.

Although such a feat is difficult to achieve, finding the right investments in highly prospective copper projects leading to discoveries would help to close the impending supply gap.

While new copper discoveries tend to cause excitement within the industry, it is the size of a discovery that really matters and offers long-term growth potential for investors.

Such projects are extremely rare, but not impossible to unearth with the right approach.

Within an underexplored region of northeastern Colombia, Max Resource Corp. (TSXV: MXR) (OTC: MXROF) (Frankfurt: M1D2) has not only been finding high-grade copper zones at its flagship CESAR property, but expanding these areas, confirming the potential existence of a massive sediment-hosted system comparable to the biggest in the world.

The CESAR property is situated along the famous Andean Belt, the world’s leading copper-producing belt, within a region that enjoys major infrastructure from existing mining operations including Cerrejon, the largest coal mine in South America.

The entire project area lies on a massive sedimentary system covering a significant portion of the 200 km long Cesar Basin, a massive geological feature that extends for over 1,000 km from the northern tip of Colombia southwards through Ecuador and Peru.

As such, CESAR represents a type of sediment-hosted copper mineralization that is typically flat-lying, near surface, and known to be extensive in only certain parts of the world, namely Africa, Poland and Colombia.

The Max exploration team interprets the sediment-hosted stratabound mineralization of the Cesar Basin to be analogous to both the Central African Copper Belt (CABC) and the Polish Kupferschiefer in terms of grade, scale and mineralogy.

Almost half of the copper known to exist in sediment-hosted deposits is contained in the CACB, including Ivanhoe Mines Ltd.’s 95-billion-pound Kamoa-Kakula copper deposits in the Congo.

Poland’s Kupferschiefer deposits are considered to be the world’s biggest silver producer and Europe’s largest copper source, mining an orebody 0.5-5.5 metres thick at depths of 500 metres. In fact, Kupferschiefer’s silver yield is almost twice the production of the second-largest silver mine.

In 2018, the Kupferschiefer deposits produced a total of 3 million tonnes of copper and 40 million ounces of silver the year after, at grades of 1.49% Cu and 48.6 g/t Ag.

In comparison, the CESAR target in Colombia has comparable grades of 1.0% Cu and 20 g/t Ag over a similar horizon, but the orebody starts at surface rather than 500m below surface like Kupferschiefer, giving it a bigger advantage.

Over the past year, Max has continued to make significant progress when exploring the CESAR property, opening up more possibilities for what the company believes to be a massive copper-silver mineralized system.

2021 was highlighted by two major discoveries: the URU and CONEJO zones, both of significant size with high-grade copper-silver results, expanding the CESAR North belt to over 90 km in length.

This brings the total number of discovery zones at CESAR to five since the company took ownership of the project in late 2019.

Characterized as a new type of copper mineralization hosted in igneous rock, the CONEJO discovery was first announced in March and later extended several times throughout last year following a series of high-grade assays from rock panel sampling.

“The presence of high-grade copper in both the stratabound horizon and within the igneous hosted stockwork cutting the copper horizon suggest CONEJO to be a significant stand-alone copper target capable of hosting a substantial copper deposit,” Max CEO Brett Matich commented in the Nov. 3 news release.

At the moment, this high-grade copper-silver zone spans 3.7 km of strike with an average grade of 4.9% Cu, is open in all directions, and lies along the CESAR North Kupferschiefer-type (SEDEX) mineralization.

A drill program to test the mineralization at CONEJO is being prepared for 2022.

The second discovery of 2021 was the URU copper zone, which lies along the southern portion of the 60 km long CESAR North target area, about 30 km to the south of CONEJO.

Like CONEJO, the URU zone has been expanded multiple times since its discovery in April, now spanning 48 km² over a major structural corridor, and remains open in all directions. Sampling from URU has also indicated what appears to be a mineralized system of significant size.

Eighteen rock samples collected over widths ranging from 1.0 to 10.0m returned values in excess of 2.0% Cu. Thirty-two returned values greater than 1.0% Cu, with highlight values of 14.8 % Cu and 132 g/t silver.

According to Max, the URU discovery potentially represents a zone of major proportions when compared to the world-class Kupferschiefer and the Central African Belt deposits. While URU’s grades are a little lower than CONEJO’s, the company still believes the mineralization encountered there could have scale given its larger volume.

This large-scale potential was confirmed in December when as many as five drill target zones over 15 km of strike, with widths of 10 to 25 metres over 500 vertical metres, were identified by the Max team.

The Max field team is currently conducting systematic and methodical rock sampling and mapping programs to further define multiple drill targets spread along the 15 km of strike at URU.

Forging the way for more advanced work programs, surveys and drill permitting at URU, the company announced in November a total of four mining concession contracts that collectively cover an area of 70 km², providing a secure tenure of the current 48 km² copper-silver zone.

Having been granted first mining concessions, Max immediately went to work by initiating an airborne high-resolution LiDAR survey over the entire URU zone. The LiDAR survey, consisting of 600-line-km with 250m line spacing covering approximately 290 km², is part of the first steps to determining high-probability drill targets at URU.

In a Dec. 8 news release, CEO Brett Matich said “the goal is to maximize the success of the drill programs by pinpointing high-priority targets through field exploration and the proposed (ongoing – Rick) LiDAR survey within each of the five target zones.”

“These programs will be key to optimizing Max’s virgin drill program at URU, being the first significant exploration event since the discovery of Cerrejón, the largest coal mine in South America and the basis for much of the critical infrastructure in the Cesar basin,” he added.

In 2022, Max looks to continue its exploration success at the CESAR property, moving closer to delineating the true extent of what it believes to be a massive sediment-hosted stratiform copper-silver mineralization comparable to some of the world’s best.

On the company’s itinerary for the year are the following items (in no particular order):

The upcoming drilling should be of particular interest to Max shareholders, given that it would be the first significant copper-focused drilling event in the area, results of which could indicate the presence of a previously unrecognized copper-silver system with district-scale potential.

Another milestone year is on the horizon for Max as its flagship CESAR project enters the drilling phase. In the meantime, regional exploration of the Cesar basin continues, which may bring further surprises along the way.

Richard owns shares of Max Resource Corp. (TSX.V: MXR) and MXR is a paid advertiser on his site aheadoftheherd.com