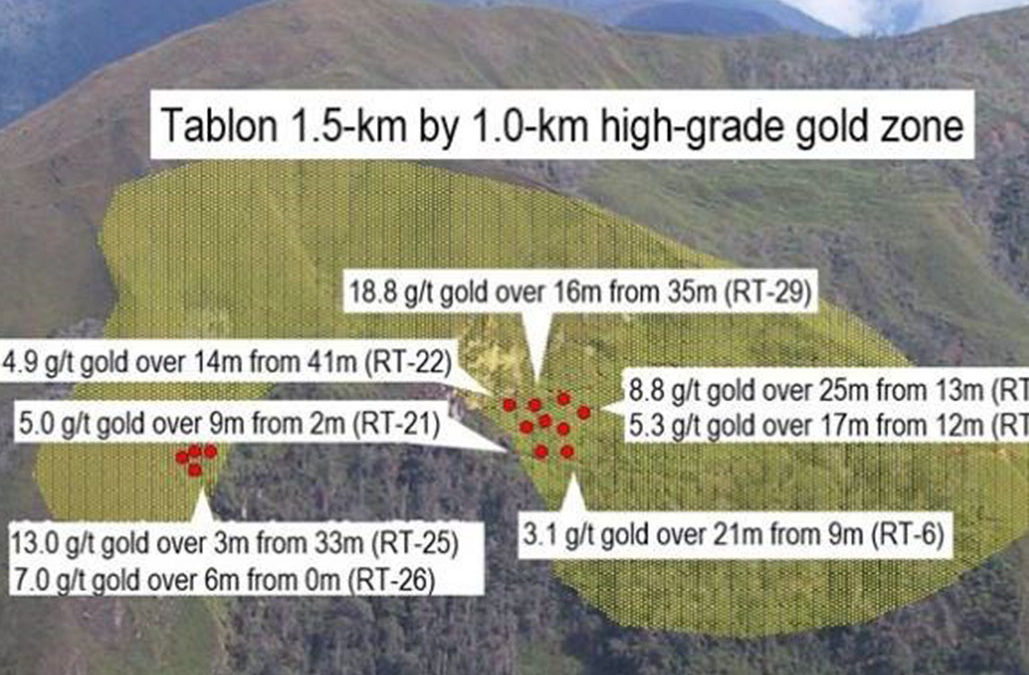 In mineral exploration, often-times a company new to a project can achieve a  good understanding of it from what has been done previously. Such is the case with Max Resource Corp. (TSXV:MXR, OTC:MXROF, Frankfurt:M1D2). The Vancouver-based company has published some fantastic intercepts from historic drill core at its recently acquired RT Gold property in Peru.

“Management believes results like these are exceptional and rare. Whilst exploration is still at an early stage, the high-grades and thicknesses at shallow depths is remarkable,” stated Max’s CEO, Brett Matich, in the Dec. 21 news release. “Expansion potential for Tablon is significant, and re-analysis of the historic core will guide selection of high priority drill targets.”

The company notes that presently, only gold assays are available, however re-assaying will include multiple elements, done with the intention of delineating high-priority drill targets.

RT Gold is a project with potential scale. Acquired by Max earlier this year by option agreement, it sits along the Condor mountain chain of northern Peru, within the Cajamarca Metallogenic Belt. This geological belt extends from central Peru into southern Ecuador, and hosts a number of world-class gold deposits, including Fruta Del Norte (10Moz), Minas Conga (17Moz), Yanacocha (36Moz), Lagunas (8Mozs) and Pierina (7Mozs).

The soil geochemistry of the Cerro Zone has outlined a 2.0 km by 1.5 km gold anomaly, open in all directions grading from 0.1 to 4.0 g/t gold. Soil geochemistry is coincident with IP chargeability.

Despite the geophysics matching the geochemical (soil and rock sampling) results on surface, Cerro has never been drill-tested.

The abundance of previous diamond drill core and related seismic data from oil and gas operations, will allow Max to model the paleo-topography of the mineralized stratabound horizon at CESAR. This will help to identify prospective areas for future drilling.

According to the company, the oil and gas drill cores, which are stored within a secure facility by the Colombian government, have never been studied from a metals perspective.

The analysis will concentrate on drill core intersecting the prospective Jurassic stratigraphy, focusing on XRF measurements, binocular microscope studies, and photography of both selected mineralized intervals and stratigraphic contacts. The results and seismic sections will then be integrated with the company’s existing database to help build a 3D structural model.

According to Matich: “The modeling should confirm the continuity of Jurassic stratigraphy and the copper-silver horizons from surface to considerable depths down dip.”

The CESAR project spans about 500 square kilometers in northeastern Colombia, on the northern end of a 200-km-long, sediment-hosted copper-silver belt.

The Andean belt, which runs from northern Chile in the south, through Ecuador and Colombia, then arcs northwest into Panama, is known to host some of the world’s largest copper porphyry deposits including Escondida, Chuquicamata, Las Bambas and Collahuasi. Nearly half of the world’s copper is produced from this belt.

The basin is a massive geological feature that extends for over 1,000 km from the northern tip of Colombia southwards through Ecuador and Peru. The basin was a seabed trapped behind the uplifting Cordillera mountain ranges, and the model suggests that rich copper and silver-bearing fluids flooded up into the basin and deposited as they came in contact with organic matter on the seafloor.

As such, CESAR represents a type of sediment-hosted copper mineralization that is typically flat-lying, near surface, and is known to be extensive in Africa, Poland and Colombia. These types of deposits are generally higher-grade than copper porphyry deposits.

The CESAR project area enjoys major infrastructure thanks to existing oil & gas and coal mining operations including Cerrejon, the largest coal mine in Latin America, jointly owned by BHP Billiton, XStrata and Anglo American. However, this area has only seen limited copper mining in the past.

Recognizing the prospect of a major copper discovery in the region, Max Resource acquired full ownership of the property shortly after its discovery, just over a year ago, and embarked on a first-pass exploration program focused on identifying surface outcrops.

Three major discoveries have been made thus far on the property: 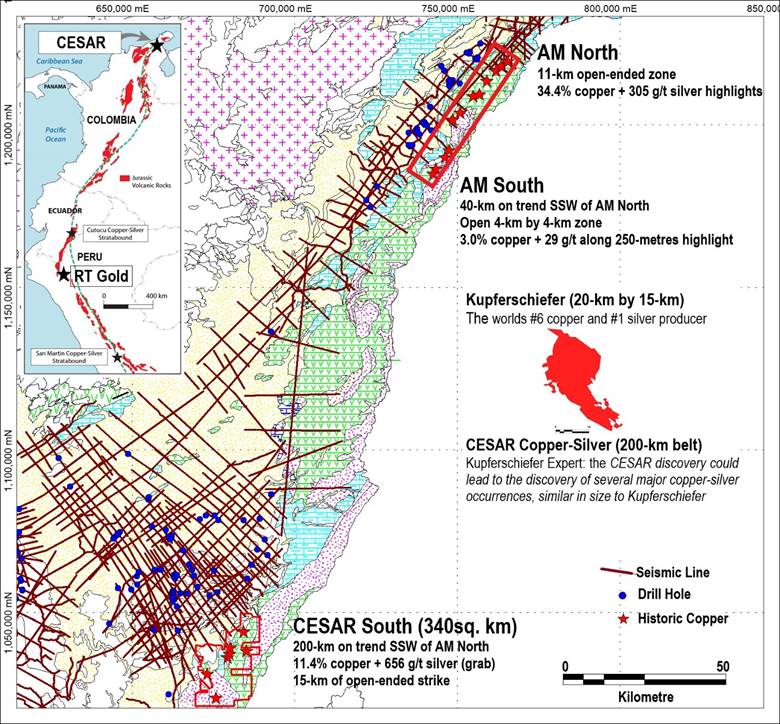 Based on the CESAR North (AM North and AM South) and CESAR South discoveries, at opposite ends of the 200-km-long CESAR target zone, Max believes that this large surface footprint represents another “Kupferschiefer-type” mineralization similar to Polish state miner KGHM’s massive Kupferschiefer copper deposits in Poland.

Kupferschiefer is Europe’s largest copper mine, with production in 2018 of 30 million tonnes grading 1.49% copper and 48.6 g/t silver from a mineralized zone of 0.5 to 5.5-meter thickness. The Kupferschiefer deposit is also the world’s leading silver producer, yielding 40 million ounces in 2019, almost twice the production of the world’s second largest silver mine.

The fact that CESAR’s Cu-Ag stratabound mineralization appears to be large, sub-horizontal sheets that repeatedly outcrop at surface, adds credibility to this Kupferschiefer comparison. Average grades of 1.0% copper and 20 g/t silver at CESAR also make a compelling case.

A notable difference is that the Kupferschiefer orebody starts at 500m below surface, whereas the CESAR mineralization starts at surface. This means Max could be looking at a district-scale, even a regionally extensive copper-silver mineralized system.

For now, Max will continue to focus on: regional rock sampling and mapping at surface; compiling the results from a property-wide geophysical thermal analysis survey, while it awaits results of the drill core and seismic studies; and expanding its land holdings.

The CESAR project has certainly attracted the attention of interested parties due to its favorable location and geology. Max has three non-exclusive confidentiality agreements in place: the first with one of the world’s leading copper producers, a second with a global mining company and a third with a mid-tier copper explorer.

The company also had no problem raising money to keep exploration going at CESAR heading into the New Year. In October Max completed a $6.5 million private placement, which saw mining billionaire Eric Sprott invest in the company for the first time with a 9.6% shareholding.