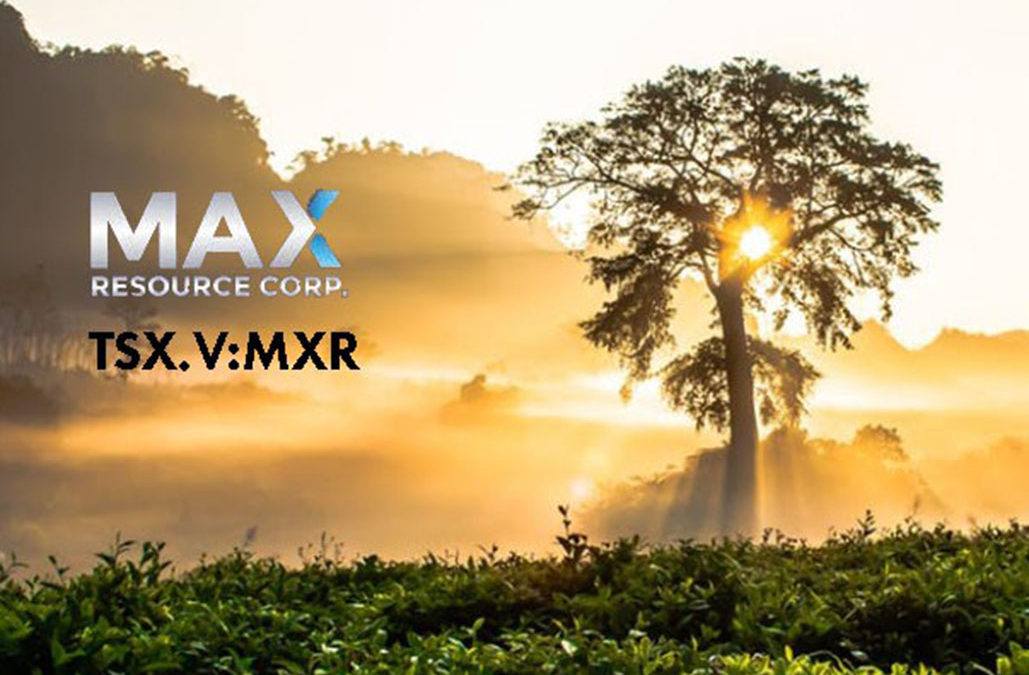 The Vancouver-based company is following the theory that continuous panel samples are pointing to a giant, sediment-hosted copper + silver mineralized system.

Its recent AM North and AM South discoveries are hosted in well-bedded sandstone-siltstone similar to KGHM’s monster “Kupferschiefer” mines in Poland.

The fact that the AM North and AM South targets appear to be large sub-horizontal sheets, that partly outcrop at surface, adds credibility to the Kupferschiefer analogy – as do the results from a recent study by Poland’s AGH University, indicating the silver mineralogy at CESAR is similar to Kupferschiefer.

In Poland’s Kupferschiefer deposits, continuous mineralization extends down dip and laterally for many kilometers. Could the mineralization at CESAR do the same? If so, Max could be looking at a district-scale, even a regionally extensive copper silver mineralized system.

Please note, the average overall CESAR target grade is 1.0% copper + 20 g/t silver. The high-grade zones at CESAR lower the cut-off grades, which significantly increases the tonnage – it’s all about scale.

Max has entered into non-exclusive confidentiality agreements with a leading copper producer and a global miner.

The first phase of the partnership with one of the yet-to-be-named companies, involves a technical study by Fathom Geophysics, currently underway.

The aim of the study is to map stratigraphic (rock layers) features that can help to pinpoint additional stratabound copper silver mineral horizons at CESAR.

Having two majors come in so early – just 10 months into an exploration program – validates Max’s Kupferschiefer exploration model, and the results.

Though still early-stage, Max’s CESAR has in short order, less than a year, already attracted the interest of not one, but two major mining companies.

If Max can demonstrate the potential “district scale” of CESAR, a major may jump in early and buy out CESAR, as the prize could be far too big to ignore.

In addition to its growing land position in Colombia, where it has established a first-mover advantage at its “Kupferschiefer-style” CESAR copper-silver project, Max Resource Corp recently executed an option agreement to acquire a 100% interest in the RT Gold property in Peru. RT Gold consists of two contiguous mineral concessions located 760 km northwest of Lima in the district of Tabaconas.

The Cesar-Ranchería Basin is bounded by the Sierra Nevada de Santa Marta and the Serranía del Perijá mountain ranges. Two rivers flowing through the basin, the Cesar and Ranchería, bear its name.

The Cesar-Ranchería Basin hosts Cerrejón (owned by BHP, Anglo American and Glencore), the tenth biggest coal mine worldwide and the largest in Latin America, where low-ash, low-sulfur bituminous coal is mined from the Paleocene Cerrejón Formation. Offshore gas operators include Chevron and others. The basin is relatively under-explored for hydrocarbons, compared to such neighboring hydrocarbon-rich provinces as the Maracaibo Basin and Middle Magdalena Valley.

The basin is also estimated to hold the second-largest reserves of coal bed methane in Colombia, or 25% of the country’s total resources.

It’s interesting to note that energy companies looking for oil and gas in the sedimentary basin at CESAR possibly missed core intervals indicative of a copper deposit (or groups of deposits) since O&G companies were looking for hydrocarbons.

Max plans to utilize historical seismic data and drillhole core/chips, gleaned from historical oil and gas exploration. The same tools (drill hole and seismic) have been used by KGHM at Kupferschiefer. The mineralized horizon intersected by a drill hole is projected onto the seismic profile and then the mineralized stratabound horizon is traced along its strike or dip. This technique allows to generate a 3D model of the paleo-topography of the mineralized horizon and select more prospective areas for future drill targets.

Using the Kupferschiefer exploration model, potential district scale tonnage could be demonstrated at CESAR by interpretation of the copper and silver horizons at surface, with copper and silver mineralization at depth. The drill core and chips can give Max some very good evidence of what lies below. The seismic can trace the horizons from kilometres below the surface and/or link known surface outcropping mineralization with mineralization intersected by a drill hole.

Moreover, identification of copper in the historical oil/gas drill holes could be enough to demonstrate to majors the potential of CESAR to be a Kupferschiefer look-alike. Remember, in Poland’s Kupferschiefer deposits, continuous mineralization extends down dip and laterally for many kilometers.

It’s possible, that the mineralized areas Max has identified at surface (ie. AM North and AM South) will correlate with the mineralization that Max expects to encounter at depth in the historical oil and gas drill holes. That would enable Max to build a significant strike length and down dip extension of presently known mineralization.

For now, Max’s Q4 focus is obtaining the oil/gas drill results and seismic data, and executing its November/December field exploration. Key to the program will be obtaining and publishing significant AM North and AM South assays, as well as getting the results from a property-wide geophysical survey by Fathom Geophysics, as Max seeks to expand its landholdings to a district-wide scale.

And this just in: Max has just brought on Rahim Kassim-Lakhas as Strategic Advisor to the company.

Founder and CEO of Blue Sail Capital, and having served in senior and executive roles for Fidelity Capital, US Global Investors (Frank Holmes), GMP, National Bank, Desjardins and Salman Partners, Mr. Kassim-Lakhas brings over 24 years global investing and capital markets expertise, and M&A specialization. He has been instrumental in more than $5 billion of transactions.

“Using their first mover advantage, the Max team has demonstrated CESAR’s district-scale potential, receiving interest on a global scale. Max is strategically poised to take full advantage of high demand metals, copper and silver. I am delighted to assist in this remarkable opportunity,” stated Mr. Rahim Kassim-Lakha, in the Oct. 5 news release.

In another major development, Max recently paid US$300,000 for the right to acquire 100% of the RT Gold project in Peru. The option agreement requires yearly payments of US$300,000 over four years, and exercising the option requires an additional US$3 million payment on or before the fifth anniversary. The vendors retain a 2.5% net smelter royalty (NSR).

Max is fortunate to get the property; the last exploration was conducted a decade ago, with the property lying dormant since. Until Max came along, nobody had managed to consolidate it, track down the owners (it took Max 6 months to find them), and put the project together. RT Gold is a huge prize for Max and I’m about to tell you why.

RT Gold is a project with potential scale. It sits along the Condor mountain chain of northern Peru, within the Cajamarca Metallogenic Belt. This geological belt extends from central Peru into southern Ecuador, and hosts a number of world-class gold deposits, including Fruta Del Norte (10Moz), Minas Conga (17Moz), Yanacocha (36Moz), Lagunas (8Mozs) and Pierina (7Mozs).

The soil geochemistry of the Cerro Zone has outlined a 2.0 km by 1.5 km gold anomaly, open in all directions grading from 0.1 to 4.0 g/t gold. Soil geochemistry is coincident with IP chargeability.

Despite the geophysics matching the geochemical (soil and rock sampling) results on surface, Cerro has never been drill tested.

The Tablon Zone is located 3 km NW from Cerro and hosts numerous gold-bearing massive to semi-massive sulfide bodies over a 150-metre by 450-metre area, within a larger 1.0 km by 1.5 km area of anomalous gold soil and rock geochemistry.

A total of 33 holes were diamond drilled in 2001 at Tablon with highlight intersections of:

Intervals are core lengths, not true widths, which are unknown at this time.

Other key points about the Rio Tabaconas (RT Gold) gold project, gleaned from an NI 43-101-compliant geological report, published in 2011 for a former operator, Golden Alliances Resources Corp., include:

The ink is barely dry on the option agreement and Max is already working RT Gold into its Q4 plans. KPIs include digitizing data for subsequent interpretation, for drill target generation; field work to expand the Cerro Zone’s 2.0 by 1.5-km zone; expand the Tablon high-grade areas and the 1.0 km by 0.5 km zone; and obtain permits for drilling in 2021.

At AOTH, we’re excited to be working with Max on this property which shows tremendous potential. The maps and historical exploration data suggest a “mountain of gold”.

There seems to be gold flowing everywhere on the two hills comprising the Tablon and Cerro zones, as the photos above show. We already know there are surface expressions, and we also have indications, through the geophysical studies, of something underneath.

Cerro has all the geological ingredients to potentially host the next major gold discovery that lies along the prolific Cajamarca Metallogenic mineral belt.

Tablon is no slouch either. Here we have several gold-bearing sulfide bodies over a 150 metre by 450 metre area, within a larger 1.0 km by 1.5 km area of anomalous gold soil and rock geochemistry. Previous drill core highlighted gold grades of 118 g/t. That is unbelievably high grade. There is also major upside potential. Again, in the photo above look at all the green “Open” boxes denoting open-ended mineralized zones.

Max Resource Corp has managed to pull together two very impressive properties – CESAR with copper + silver and the new RT Gold project. Both will be aggressively advanced for the rest of 2020 and 2021. We can expect a lot of news flow.

Arguably, the addition of RT Gold to the company’s portfolio – remember this is a highly sought-after property Max has managed to pull together – makes MXR an even more interesting company than when the focus was only on CESAR.

But Max isn’t taking away from CESAR by acquiring RT Gold. In fact, at AOTH we believe the opposite is true. In bringing on investment banker Rahim Kassim-Lakha, a capital markets veteran and an M&A specialist, Max Resource Corp is telling shareholders, and the market, that it is getting serious about offering CESAR up for acquisition.

Max’s goal always was to get the project to the point of being acquired by a major copper or global mining company, that is attracted to the CESAR copper-silver project from a district-scale perspective, and potentially as the next Kupferschiefer.

We already know that major mining companies are circling CESAR like a pack of great whites. Though still early-stage, in less than a year the project is getting the attention of majors and mid-tiers. And why wouldn’t it? The possibility of a monster copper-silver system running for kilometers beneath the surface mineralization at AM North and AM South may just be too big to ignore.

The company has executed a number of non-exclusive confidentiality agreements (“CAs”), including one with a major copper producer and another with a global miner.

With all that is going on right now with Max, it makes me wonder whether CESAR is going to be around for much longer.