Max Resource (TSX-V:MXR) has delivered strong assay results from chip samples taken from the North Choco project in Colombia, which the company is in the midst of acquiring through an option agreement.

Now three weeks into a 10-week exploration program, Max said seven of 23 chip samples returned grades ranging from 2.9 grams per tonne (g/t) gold, to a glittering highlight of 155.27 g/t over a 0.4m intersection. Of the seven samples, three showed decent copper grades in excess of 1% Cu, in a vein zone containing pyrite, chalcopyrite (the copper mineral) and galena.

Max reported the chip samples were taken over various widths from four locations within a 400- by 700m exploration area centered on North Choco’s historic gold mine.

“We are very pleased with this first round of assays from our intensive exploration campaign. The assay results are delivering significant grades of gold and we expect the copper re-assay results very soon,” Max CEO Brett Matich said in a news release. He added, “Our strategy is to expand our exploration efforts in all directions within the 500 sq. km land package.” 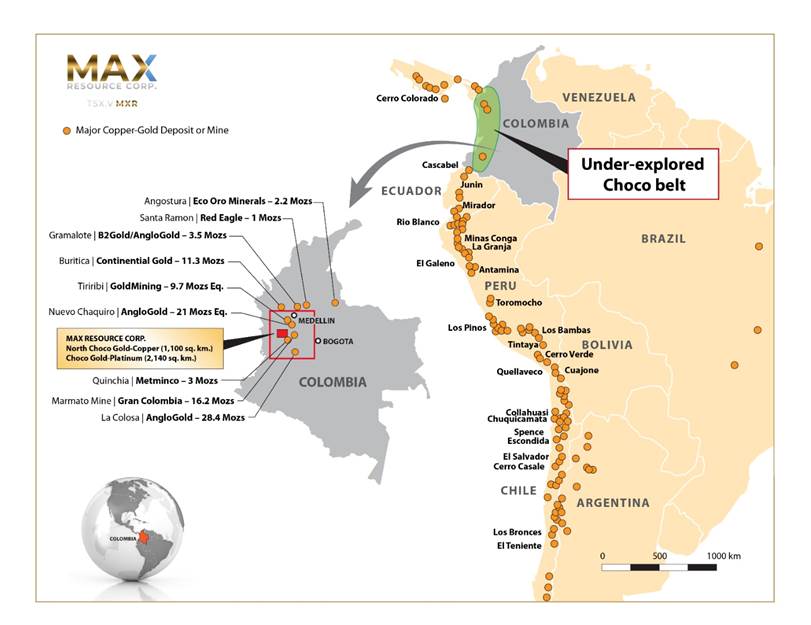 Max is the company with a conglomerate gold project in the Choco region of Colombia; conglomerated free gold, at surface, is potentially spread across 1,000 kms, as shown in an LWIR (long wave infrared) satellite survey below. 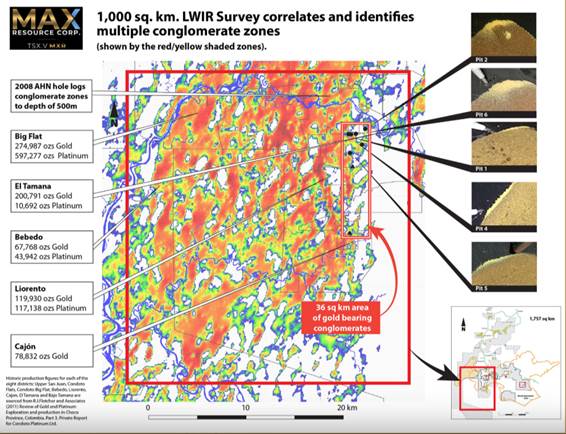 While Max continues to work the Choco Precious Metals Project, which has attracted serious investor interest due to its potentially large (we’re talking a gold elephant) scale, the company has been busy acquiring new prospective ground.

On May 8 Max announced it entered into a binding letter of intent (LOI) with Noble Metals and Buena Fortuna Mining, to acquire 100% of those two companies’ interest in Andagueda Mining, which has an agreement with the Tahami indigenous group – the landowner – to explore and exploit a 72.5 square kilometer mining area.

Of note to Max investors is historic exploration at North Choco and environs.

First, North Choco is contiguous to properties held by AngloGold Ashanti and Continental Gold. Forty-seven kilometers to the northeast, AngloGold’s Nuevo porphyry copper discovery has an inferred resource containing 3.95 million tonnes of copper (@0.65% Cu) and 6.13 million ounces of gold (@0.32 g/t); it is one of five known porphyry centers concentrated within a 15 sq. km area.

Second, AngloGold’s initial reconnaissance work at North Choco, in 2005, identified pyrite, chalcopyrite, galena, sphalerite and arsenopyrite, in a matrix of quartz and calcite from historic gold mines and copper porphyry prospects. However, there was no follow-up because of access restrictions. 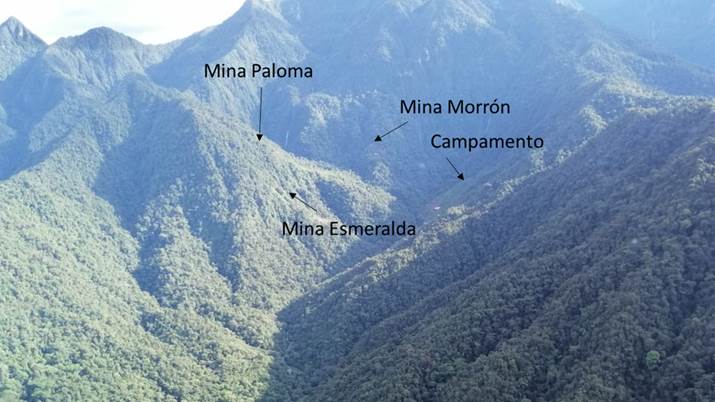 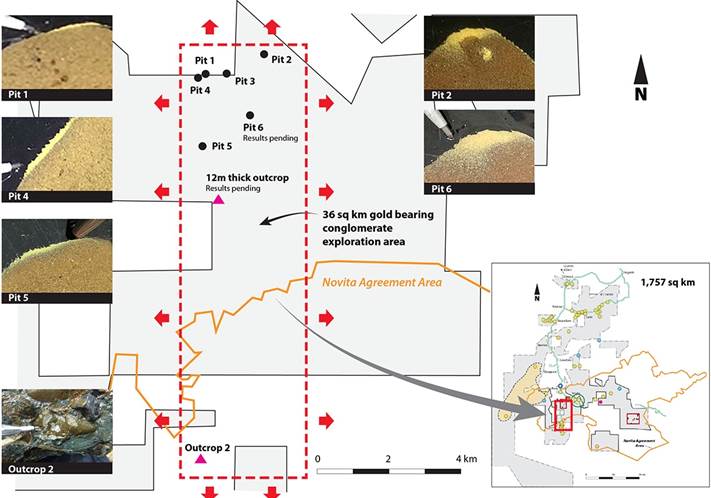 Max has bulk-sampled an area of historical alluvial gold mining (the conglomerate gold underneath has never been fully explored), by digging and sampling six pits (2m by 2m by 30cm-deep) spread over a 36 sq. kilometer area. 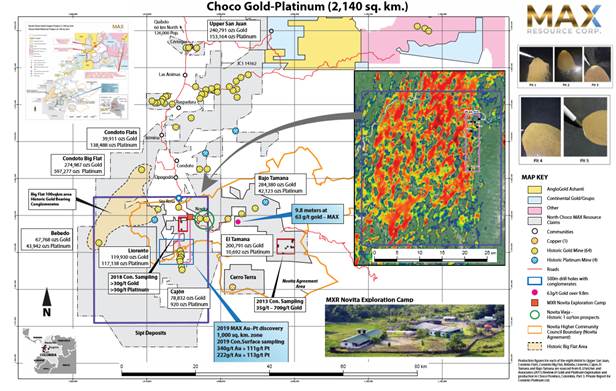 It’s important to note that these two samples were taken from surface, within a 36-square-kilometer area initially identified by Max as potentially containing conglomerate gold. The samples are also near the six test pits dug as part of the bulk sampling program, described above.

The geological theory Max is operating under, is there is a precious metals intrusive (gold, platinum, palladium) that runs right up to surface. In some areas there is more platinum than gold (80-20%) and in others the ratio is reversed (20% platinum to 80% gold).

The conglomerate gold is fine-grained free gold whereas the overlaying alluvial gold and platinum is coarse-grained. If the conglomerate gold is indeed the source of the alluvial gold (and platinum), the company thinks that the grades will increase as the conglomerate is explored deeper, Max’s CEO, Brett Matich, told Ahead of the Herd in an earlier interview. Matich added that by assaying the concentrate samples at surface, it allows MXR to more quickly identify the enrichment zones over the 1,000 sq. km target zone.

The company announced it will hive off a portion of Gachala to Universal Copper (TSX-V:UNV). Under the terms of a non-binding letter of intent (LOI), Universal agreed to issue Max 6 million shares, in exchange for the North Block of the Gachala Copper Project, which contains seven mineral license applications comprising 13,280 hectares.

Located in a sedimentary copper basin comparable to the Zambian Copper Belt, historical sampling has identified a 24-kilometer strike length, with copper grades ranging from 0.5% to 13%. Anything over 1% is considered high-grade copper. A 4-km cobalt anomaly has also been identified.

Max retains three-quarters of the Gachala Copper Project (40,258 ha) as Universal Copper begins exploring the highly prospective North Block. The deal for UNV to acquire the North Block was finalized on April 24.

Perhaps the most exciting thing about Gachala, other than the potential for high-grade copper, is the geology. Those who studied earth science may recall that millions of years ago, the continents were stuck together in one giant super-continent known as Pangea. Plate tectonics gradually moved the continents apart. At the time, the east coast of South America fit like a piece of a jigsaw puzzle into the underside of the west side of Africa that is shaped like a hammer.

In fact, the Gachala Project underlies a 250-km by 120-km belt of Devonian Cretaceous rocks in a geological setting believed to be analogous to the Zambian copper belt. This belt hosts Zambia’s “Big Four” copper mines – Barrick Lumwana, FQM Kansanshi, Mopani and KCM (Konkola Copper Mines) – which account for around 80% of Zambia’s annual copper production.

“The Gachala project is a very attractive type of deposit,” Universal Copper’s President and CEO Clive Massey told Ahead of the Herd in a recent interview. “It’s a flat-lying, sedimentary oxide deposit. These types of deposits are the least expensive to mine. Ultimately, it’s a potential SXEW (solvent extraction, electrowinning) operation.”

Universal hasn’t yet decided on its 2019 work program at Gachala, but Massey expects exploration to include grid soil and stream sampling.

The company has already begun work on the project – having released the results of an LWIR survey conducted over the North Block. The best spectral match from the high-tech satellite survey suggests the main Devonian-Permian/Cretaceous contact is anomalous along much of its over-40 km strike length within the North Block applications, supporting the company’s belief that this contact area is highly prospective for sedimentary copper deposits.

Back to Thursday’s chip sample results, the high gold-copper values discovered at North Choco come at a very interesting time in the copper market.

Base metals copper, zinc and lead are coming under price pressure due to the escalated trade war between China and the United States.

Prices will rise and fall, but it’s long-term supply and demand that copper miners and explorers look to, as far as planning expansions and development properties. Here the market is extremely bullish on copper.

As we wrote in The coming copper crunch, copper mine production is expected to increase for the next year or so, then drop off significantly. By 2035, without major new mines up and running to replace the ore that is being depleted from existing copper mines, we are looking at a 15-million-tonne supply deficit by 2035. Four to six million tonnes of added capacity are needed by 2025.

Copper grades have declined about 25% in number one producer Chile in the last decade – highlighting the urgent need for grassroots exploration to arrest the trend.

Over in Chile, which produces 10% of the world’s copper, state miner Codelco said recently that it produced less copper in 2018 versus 2017, owing to declining ore grades at its aging mines. We’re talking a 3.3% drop, from 1.8 million tonnes to 1.6 million tonnes, resulting in $0.8 billion less profit, before taxes.

This week, Codelco said it is looking at a 40% cut in production over the next two years at its Chuquicamata mine, as operations switch from open-pit to underground.

The $5-billion undertaking is needed to prolong the life of Chuquicamata which is running out of economically extractable ore. The century-old mine has an above-ground pit the size of 3,000 American football fields.

According to Reuters, output at the revamped “Chuqui” mine is expected to fall to 1.66 million tonnes by 2021, compared to 1.73Mt this year – causing Codelco’s total copper production to slip 4%. It will take until 2027 for output at Chuqui to reach 2019 levels.

Africa’s second largest producer is expecting copper production this year to be up to 100,000 tonnes less than in 2018, due to a change in the tax law.

Zambia’s Chamber of Mines attributes the production drop to changes in mining taxes which have driven up costs and forced copper miners to reduce output. The country’s copper production has already tumbled 11.3% in the first quarter of 2019 versus the last quarter of 2018.

Looking at global copper production, MINING.com reported a 2.4% fall in February, with Chile and Peru hit the hardest, at a respective 7.1% and 5.1% reduction, year on year.

The big question for the copper price is, when will lower supply catch up to sagging demand, owing to economic growth slowing amid the ramped-up trade war? Right now lower demand is winning the race but it’s only a matter of time before supply tightens to the point where its intersection with low demand lifts the copper price. And if a trade deal is reached, expect the price to move even higher.

Either way, it’s a win for the copper price, copper mining companies and copper bulls like us at Ahead of the Herd.