Up to now exploration at Choco, in Colombia, has focused on the conglomerate gold (free gold contained in hard rock up to about 12m below surface) but in its latest set of results, Max updates investors on the results of two samples taken from a 1,000-square-kilometer new exploration zone.

The sprawling zone was identified by a long-wave infrared (LWIR) satellite survey completed earlier this year. 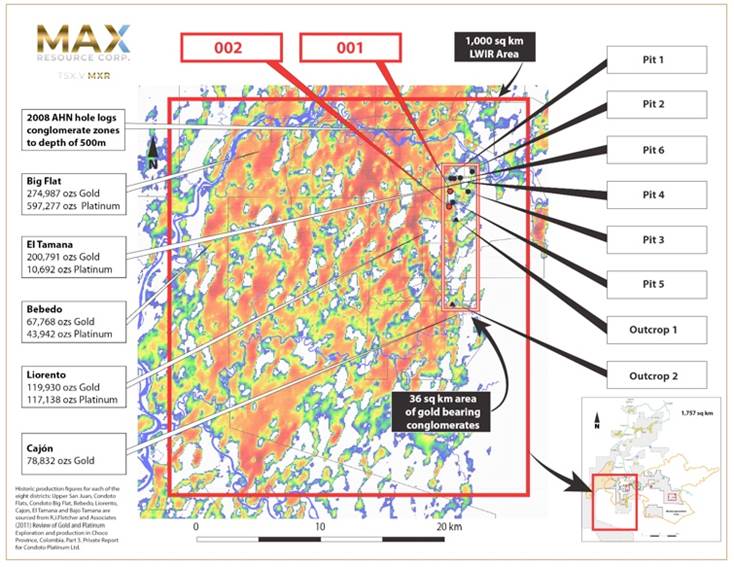 It’s important to note that these two samples were taken from surface, within a 36-square-kilometer area initially identified by Max as potentially containing conglomerate gold. The samples are also near six test pits dug as part of a bulk sampling program. (see below for details)

The geological theory Max is operating under, is there is a precious metals intrusive (gold, platinum, palladium) that runs right up to surface. In some areas there is more platinum than gold (80-20%) and in others the ratio is reversed (20% platinum to 80% gold).

The conglomerate gold is fine-grained free gold whereas the overlaying alluvial gold and platinum is coarse-grained. If the conglomerate gold is indeed the source of the alluvial gold (and platinum), the company thinks that the grades will increase as the conglomerate is explored deeper, Max’s CEO, Brett Matich, told Ahead of the Herd in an earlier interview. Mr. Matich added by assaying the concentrates of samples at surface, it allows us to more quickly identify the enrichment zones over the 1,000 sq. km target zone.  .

Its important to note that the concentrate is recovered simply by panning and the sample tailings which comprise of about 99.7% of the sample has not been assayed. Also recovered gold and platinum is significant compared to assays.

The two samples will be further assayed for evidence of other platinum group elements. At the same time, Max will move northward to collect more samples for assaying, within the 1,000 square kilometers identified by the satellite survey.

Otherwise known as thermal imaging, LWIR is a new mineral exploration technique that employs satellite imagery to uncover targets that were previously unavailable to exploration companies. LWIR bands can penetrate vegetation and other ground cover, up to 60 centimeters (24 inches) beneath the surface, to mathematically “fingerprint” mineralized areas.

The aim of the LWIR survey was to identify a correlation between gold-bearing conglomerate outcrops (mineralized areas at surface) and historical production in the Choco Precious Metals District, located 100 kilometers from Medellin.

The results of the LWIR go far beyond the previously identified 36-square-kilometer area thought to contain gold-bearing conglomerates. Max has full and partial ownership of seven mineral license applications totaling over 1,757 square kilometers.

At a shareholders’ meeting on April 2, the company voted to acquire the mining rights to a 1,050-square-kilometer land package known as the Novita Project, finalizing a deal with previous rights owner Noble.

Max now controls a grand total of 2,807 square kilometers of prospective gold-bearing conglomerates in the Choco region of Colombia.

Max has bulk-sampled an area of historical alluvial gold mining (the conglomerate gold underneath has never been fully explored), by digging and sampling six pits (2m by 2m by 30cm-deep) spread over a 36 sq. kilometer area.