The truth, in regards to the world’s mineral resources, is that we in the western developed countries are usually not in control of supply.

“The spectre of resource insecurity has come back with a vengeance. The world is undergoing a period of intensified resource stress, driven in part by the scale and speed of demand growth from emerging economies and a decade of tight commodity markets. Poorly designed and short-sighted policies are also making things worse, not better. Whether or not resources are actually running out, the outlook is one of supply disruptions, volatile prices, accelerated environmental degradation and rising political tensions over resource access.” Chatham House, Resources Futures

There are many serious concerns in regards to global resource extraction that we need to consider:

Access to raw materials at competitive prices has become essential to the functioning of all industrialized economies.

Accessing a sustainable, and secure, supply of raw materials is going to become the number one priority for all countries. Increasingly we are going to see countries ensuring their own industries have first rights of access to internally produced commodities and they will look for such privileged access from other countries.

Numerous countries are taking steps to safeguard their own supply by:

“Continued growth in consumption resources is being driven by growth in China and the rest of Asia. Chinese companies are increasingly acquiring assets, as are Indian companies, prompting other global miners into a race to secure mineral assets of their own.” George Fang, Standard Bank’s Head of Mining and Metals China

The new competitor’s for the world’s resources have a mandate to secure long term resource deals for domestic use and have the financing capabilities any major mining company, or for that matter any government, would be envious of.

China’s state owned enterprises (SOE) and sovereign wealth funds (SWF) were armed with hundreds of billions of US dollars from the country’s foreign reserves and sent out to scour the globe for resources – they went on the hunt to fuel China’s exploding economy. China wants to diversify out of the massive US dollar component of its Foreign Reserves so the SOE/SWFs have no problem dealing in straight cash and operating in what some might consider high risk areas. The Chinese also have a longer term horizon for their ultimate payoff because they are mostly after off-take supply agreements from early stage development projects.

China, along with Japan (imports 100% of its fossil fuels) and Korea, who have no lithium of their own, have been forming strategic alliances, joint ventures, and acquisitions with lithium exploration companies worldwide.

With lithium carbonate being one of the lowest cost components of a lithium-ion battery, the issue that Asian companies are addressing supply security attained which can be achieved by acquiring lithium from various lithium producers. These measures have been ongoing since 2009 which has seen Asian companies establish joint venture and acquire existing producers.

These strategic moves have allowed battery and vehicle companies to alleviate the possibility of future lithium supply disruptions, which could have devastating consequences in a well-established and productive HEV, PHEV, and EV industry. Consider that both Korea and Japan, who are amongst the largest producers of lithium ion batteries have no lithium hard rock or salar brine deposits within their borders.” Livio Filice, Seeking Alpha

The rechargeable power needs of our modern society has made lithium a serious player in the commodity markets.

The reason for the electrification of the global transportation system is clear.

But the clean and green doesn’t end there – electric drives are more efficient then the drives on ICE powered cars. They are able to convert more of the available energy to propel the car therefore using less energy to go the same distance. And applying the brakes converts what was simply wasted energy in the form of heat to useful energy in the form of electricity to help recharge the car’s batteries.

The first DVD players, the first flat panel widescreen TV’s, the first production runs of any advanced technology are always more expensive than later unit costs will be. That is a fact, but this author believes that Hybrid and fully Electric Vehicle prices will soon be very affordable and offer cost advantages over their polluting gas guzzling ICE second cousins.

Electric vehicles are totally emission free. China, the world’s second-biggest economy, in a move to cap its carbon emissions by 2030 and curb worsening air pollution said it was preparing to set a deadlinefor automakers to end sales of fossil-fuel-powered vehicles.

That’s a lot of lithium batteries to manufacture – and the Chinese are preparing by locking up a secure supply of lithium. In just a few short years, by 2021, Chinese Gigafactory’s will provide 3.5 times more gigawatt-hours of battery cells than Tesla’s current Gigafactory.

Lithium supply or off-take agreements have been signed with lithium focused companies from Australia, Mexico and Argentina to name just a few countries – Jiangxi Ganfeng Lithium Co., a Chinese company, even has an off-take deal with a company operating in Ireland.

Here are a few examples of Chinese, Korean and Japanese lithium off-take deals: 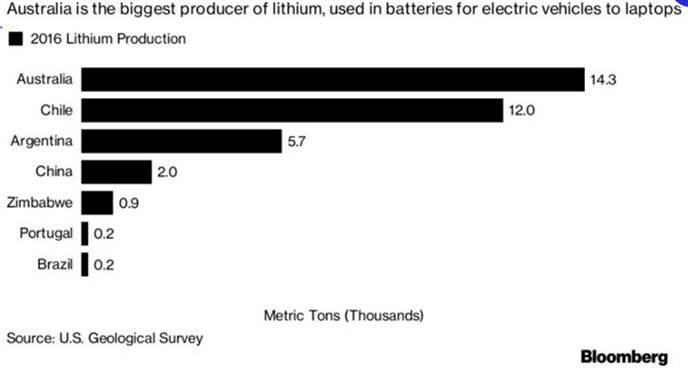 Lithium production in 2016 was 89% concentrated in three countries: Australia 40%, Chile 33% (added a new royalty regime in 2017 considerably adding to production costs) and current economic basket case Argentina 16%, which together comprised 89% of global supply.

There is no doubt that the three leading countries in lithium-ion battery production for electric vehicles are looking to, or are already close to locking up most of the global supply of lithium for their own use. Lithium project developers in North America should be on every investors radar screen – the supply of lithium for North American gigafactory’s, is going to tighten.

And no wonder Asia is locking up global lithium supply!

China and India are both going to 100% electric vehicles. Every major car manufacturer has electric models. Volvo has even promised to phase out traditional internal combustion engines (ICE) from 2019.

France has promised to end the sale of gasoline and diesel vehicles by 2040, the U.K. quickly followed suit.

Bloomberg New Energy Financepredicts electric vehicles will make up an astounding 54% of new car sales by 2040. 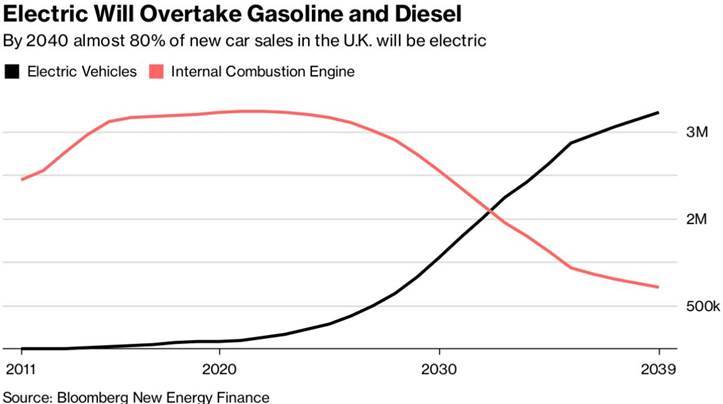 In 2016, Chinese carmakers sold 28.03 million cars. If China follows through on its promise to go 100% electric that’s a minimum 28.03 million lithium-ion battery packs.

That’s 32.73 million electric vehicles all requiring lithium-ion battery packs, without counting electric buses (a big deal in China, and going to be in India as well) or annual growth rates in auto sales.

Current annual production of lithium carbonate equivalent (LCE), for all purposes, stands at 182,000 metric tonnes, there is a very slight excess in 2017 predicted to disappear in early 2018.

Consider India is going 100% electric and piling on to the existing lithium demand, surely there will be other countries, and companies like Volvo, announcing the phase out of internal combustion engines? 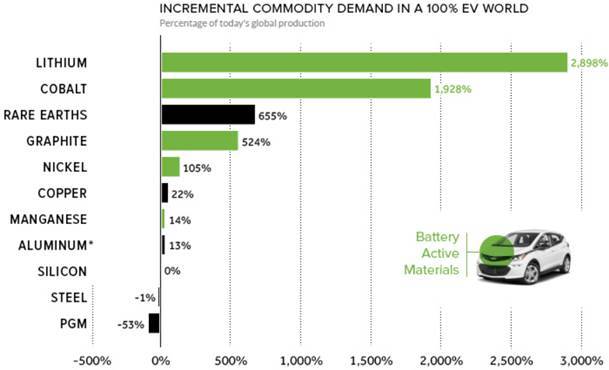 The Massive Impact of EVs on Commodities

“When you look at all the battery plants being built and the plans for EVs, even if only about 25 percent of those are realized, we’re still going to be short of lithium. It’s a unique once-in-a-generation situation.” Simon Moores, managing director of Benchmark Mineral, Electric Car Boom Drives Rush to Mining’s $90 Billion Hub