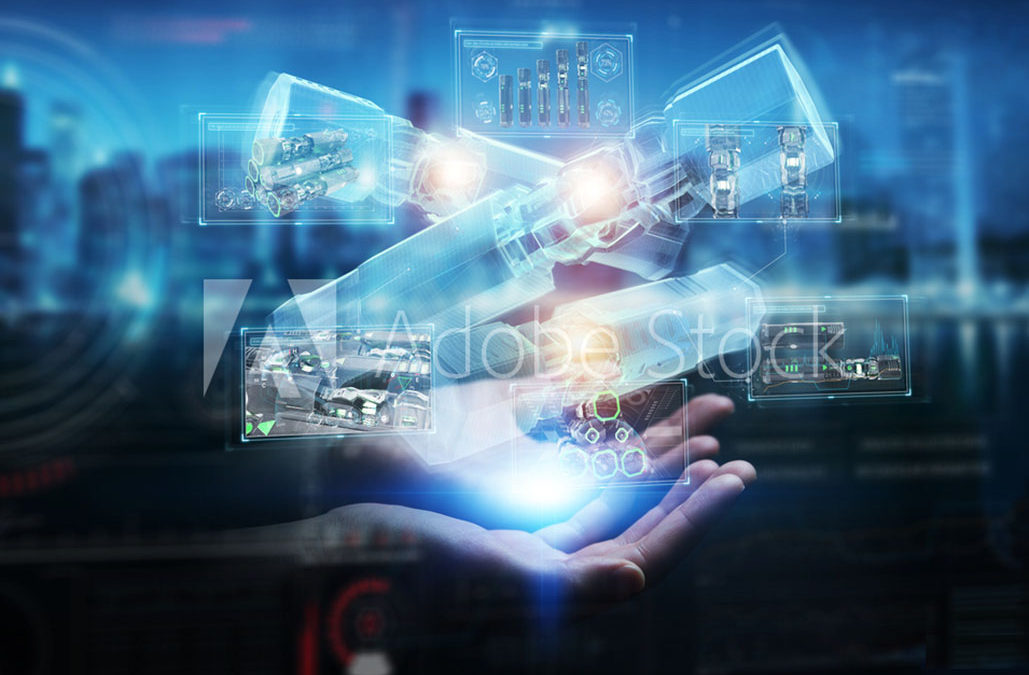 A lithium-ion (Li-ion) battery is a type of rechargeable battery technology that is found throughout portable electronics and electric vehicles. It is also growing in popularity for military and aerospace applications. This kind of battery uses lithium ions as a key component of its electrochemistry, hence its name.

For starters, a battery consists of an anode, cathode, separator, electrolyte and two current collectors (positive and negative). The anode and cathode are used to store the lithium, while the electrolyte carries ionized lithium atoms from the anode to the cathode, and vice versa.

The separator, which is located between the anode and cathode and is micro-permeable, allows the lithium ions to pass through due to their small size. 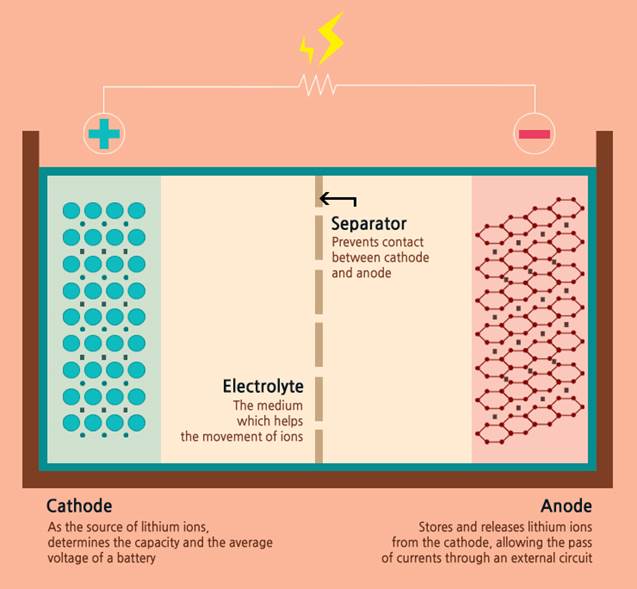 Schematic of a lithium-ion battery

During a discharge cycle, the anode releases lithium ions to the cathode, generating a flow of electrons from one side to the other. When plugging in the device, the opposite happens: Lithium ions are released by the cathode and received by the anode.

A prototype Li-ion battery was first developed by Akira Yoshino in 1985, based on earlier research by John Goodenough, Stanley Whittingham, Rachid Yazami and Koichi Mizushima. Yoshino, Goodenough and Whittingham were later awarded the Nobel Prize in Chemistry in 2019 for their pioneering work in this field.

For many years, nickel-cadmium (Ni-Cd) had been the only suitable battery for electronic equipment, but the rise of lithium-ion technologies in the 1990s proved that it’s possible to use an even lighter and higher quality rechargeable battery in our portable devices.

As the lightest metal, lithium has the greatest electrochemical potential and provides the largest energy density for its weight. At about 100-265 Wh/kg, the energy density of lithium-ion is typically twice that of the standard nickel-cadmium batteries. In addition, Li-ion battery cells can deliver up to 3.6 volts, 3 times higher than technologies such as Ni-Cd.

Li-ion batteries are comparatively low maintenance and require no scheduled cycling to maintain battery life. There is also no memory effect, a detrimental process where repeated partial discharge/charge cycles can cause a battery to ‘remember’ a lower capacity.

All of these present significant advantages over Ni-Cd batteries, thus making Li-ion the battery of choice for today’s portable electronics and power systems. From a clean energy perspective, it has become the ideal fuel source for electric vehicles, which are on their way to dominate our roads for generations to come.

Like all technologies, the Li-ion battery has evolved over the years, incorporating new chemistries for different applications and increased performance.

There are now six types of Li-ion chemistries, all of which use lithium as a key ingredient. The difference lies in the compositions of other metals in the cathode, which could include cobalt, nickel and graphite, depending on the type of application the battery is used for. 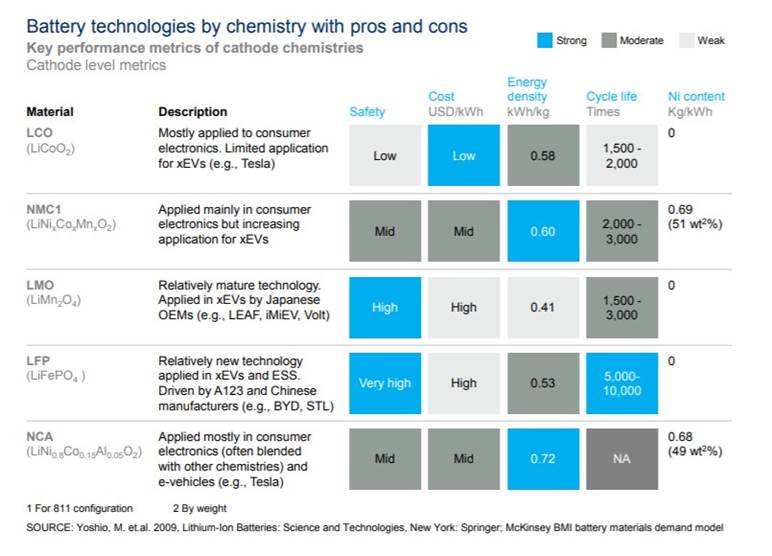 Out of these, the preferred chemistry for electric vehicles is a combination of lithium, nickel, manganese and cobalt (NMC) due to its low self-heating rate. However, Tesla – the known leader of the EV industry – currently uses an NCA chemistry (lithium-nickel-cobalt-aluminum), which has a long lifespan.

As mentioned, lithium is a common ingredient in today’s EV batteries. Rather than the white-colored metal, automakers normally use one of two natural forms of lithium compound: lithium carbonate or lithium hydroxide.

For lithium carbonate, the process involves pumping the brine into a series of evaporation ponds, crystallizing the other salts out of the brine and leaving a lithium-rich liquor; this may take up to two years. Lithium carbonate is then produced after removing impurities, and the end product can be further processed into the higher-grade lithium hydroxide, but at an additional cost.

The most important lithium hard rock minerals are found in granitic pegmatites, which are intruding rock units formed from mineral-rich magma. Spodumene (in Greek meaning “burnt to ashes”), a lithium-bearing mineral that occurs as prismatic crystals in a range of colors, is most prevalent in pegmatites. The extraction process involves crushing and heating the rocks into powdered form, with the help of sulphuric acid, and then mixed with soda ash to create lithium hydroxide.

Other potential sources of lithium include lithium clays (non-hectorite) and petroleum brines (petrolithium), though commercial-scale production from these has yet to be realized.

The world’s lithium supply chain is oligopolistic in structure: there are currently eight countries with known lithium production. Three of those – Australia, Chile and China – account for nearly 90% of the global output.

Also, only a handful of companies control most of today’s mined output. These include Chile-focused producers like Albemarle and SQM, and Chinese miners Tianqi Lithium and Ganfeng Lithium. 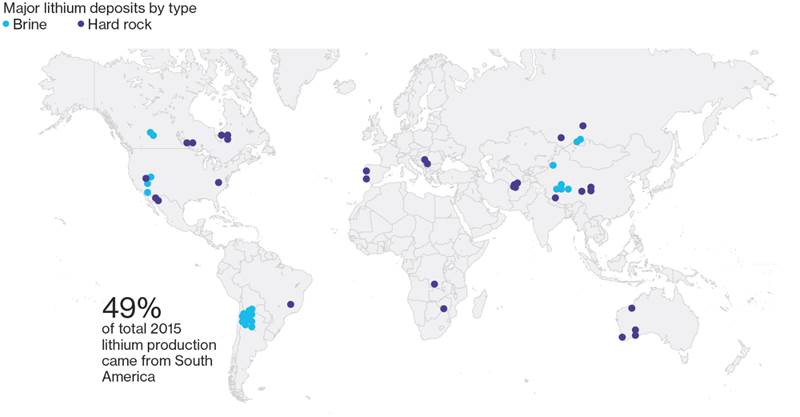 Chile, home to the renowned Atacama salt flat where more than 15% of the world’s lithium reserves are found, is the main producer of lithium carbonate. Lithium brine deposits are accumulations of saline groundwater that are enriched in dissolved lithium. Although abundant in nature, only select regions in the world contain brines.

These include parts of Chile, Argentina and Bolivia, forming what is known as the “Lithium Triangle”, and to a smaller extent Nevada. Brines make up a vast majority of the world’s lithium reserves.

On the other hand, Australia – the largest producer – has an abundance of hard rock sources, thus producing only lithium hydroxide. The largest producing lithium mine is the Greenbushes in Western Australia, operated by both Albemarle and Tianqi (though it recently sold a stake to balance its debt). Other promising lithium deposits like Wodgina and Pilgangoora, both of which have larger reserves than Greenbushes, are also found in the western part of Australia.

China is a rare exception, as it produces both carbonates and hydroxides. Being the largest consumer, it has dominance over much of the supply chain for battery metals, a position that the US would like to contend for in the future years. 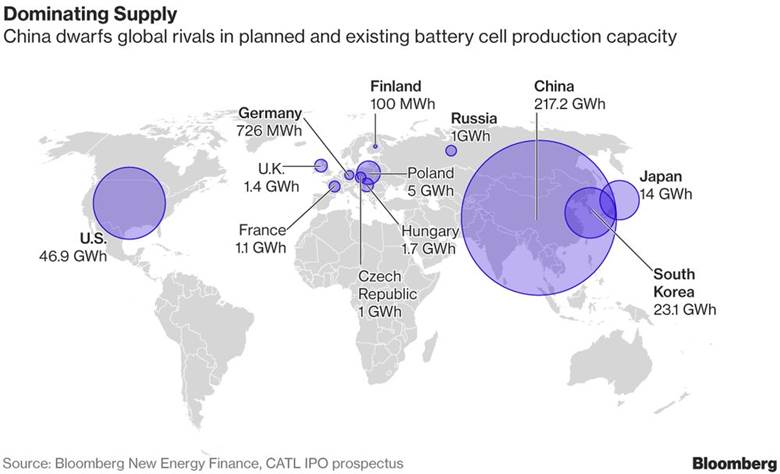 The US currently supplies only 1.2% of the world’s lithium, ranked 7th globally, despite having lithium reserves that are comparable to Australia’s. However, this will change when Nevada projects like Lithium America’s (TSX:LAC) Thacker Pass and Cypress Developments (TSX.V:CYP) Nevada, Clayton Valley Lithium Project start production.

Interestingly, the lithium at Thacker Pass and the Clayton Valley deposit of Cypress’ would be mined from neither brine or hard rock, but claystone. This is similar to the Sonora deposit in Mexico, which is the world’s largest in terms of reserves, being developed by Ganfeng and its partners.

An average production rate of 15,000 tonnes per day to produce 27,400 tonnes lithium carbonate equivalent (LCE) annually over a +40-year mine life means Cypress’s lithium project stacks up extremely well against any of the 10 deposits listed here.

Overall, world production of lithium came to 77,000 tonnes in 2019, according to the United States Geological Survey (USGS). This represents a 19% decline from the prior year, primarily due to oversupply and lower lithium prices.

The production figure is meager compared to the total reserves identified by the USGS, which is 80 million tonnes worldwide, 30% higher than 2018.

This means that supply is almost certainly to grow significantly in the years to come. 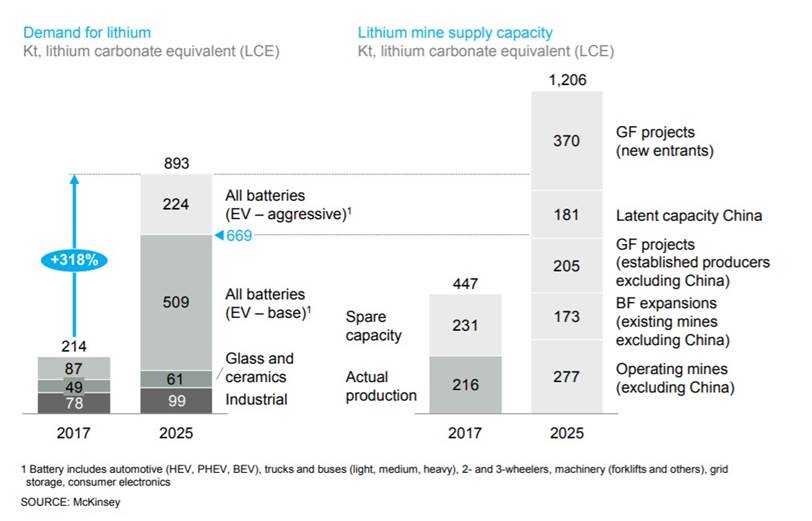 According to McKinsey, this supply boost is expected to add an additional 750,000 tonnes of lithium carbonate equivalent (LCE) to the existing capacity, cutting marginal costs of the battery material to about $8,500-$11,500 per tonne of LCE. For context, LCE prices were at one point above $20,000 per tonne at their peak in 2017, and last year the average price was $13,000 per tonne.

However, the demand side dynamics may push prices further up should the EV revolution continue its course. McKinsey estimates that production of EVs would increase over ten-fold by 2030, which would result in between 26 million and 36 million electric vehicles hitting the roads, with China accounting for more than half of those units.

Asia-Pacific is the end destination for a majority of the world’s lithium supply for EV battery use. After China, which bought 39% of the global share of lithium last year, the next largest consumers of EV battery metals are South Korea and Japan, at 20% and 18% respectively.

The region is home to some of the top Li-ion battery manufacturers including LG Chem, CATL, BYD and Panasonic. The biggest battery maker outside of that region is Tesla, which understandably has a Gigafactory location in Shanghai to serve the Chinese market. These companies are always looking to expand, evident in Tesla’s plans for another factory in Austin, Texas. 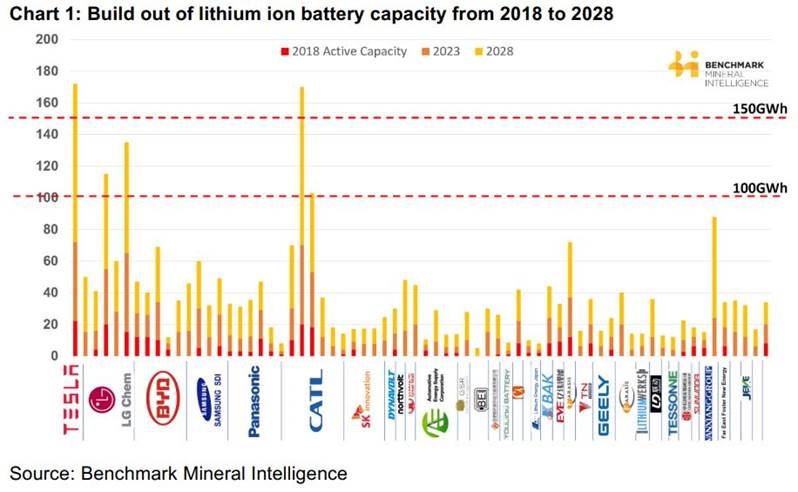 Given the relentless growth of EVs and concurrent demand for lithium, Roskill – which specializes in EV metals consulting – forecast that lithium demand is set to rise by over 20%, with demand from battery applications increasing by more than 25% per year through to 2028. 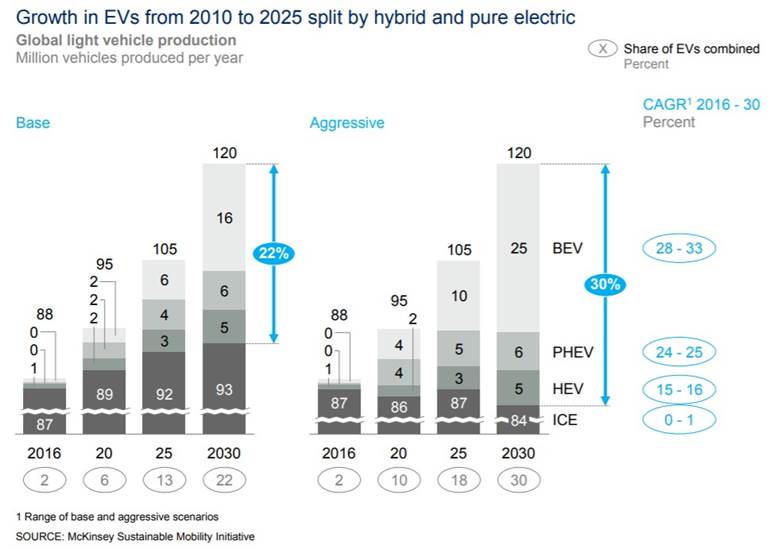 Growth in EV production from 2010-2025, split by hybrid and pure electric

By then, there would be as much as 1.89 million tonnes of lithium in demand, which is nearly 12 times the amount demanded in 2018, according to Benchmark Minerals, a leading data provider for the Li-ion battery supply chain. Please note that new demand, of up 1.89 million tonnes of lithium, is well above McKinsey’s expected supply increase of 750,000 tonnes LCE to the existing capacity from the talked mines about above, and linked to, going into production.

According to a research study, this places the global Li-ion battery market on an upward trajectory, from a $30 billion industry in 2019 to $80 billion by 2026, representing a compound annual growth rate (CAGR) of 15%.

It’s clear that a power revolution is underway and Li-ion batteries are here to stay for the long haul.

Yes refinements and improvements to the technology are constantly being explored by scientists and researchers worldwide; some have turned possibilities into discoveries.

Then there are interesting discoveries like IBM’s new battery chemistry that involves no nickel or cobalt, but materials sourced from seawater. One other alternative is to use nanowire batteries, which can stay charged indefinitely.

But for now, and the foreseeable future, it’s lithium-ion.

UNDER THE SPOTLIGHT; MILLS, AELICKS and MAX RESOURCE

Lithium is skyrocketing amid the global EV boom, will graphite follow suit? 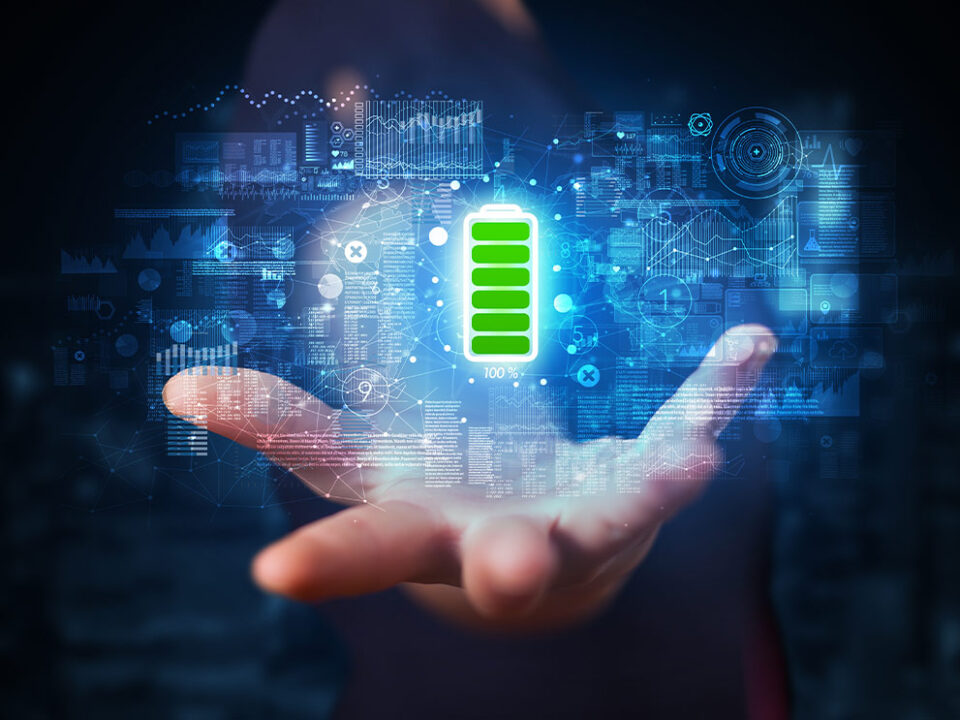