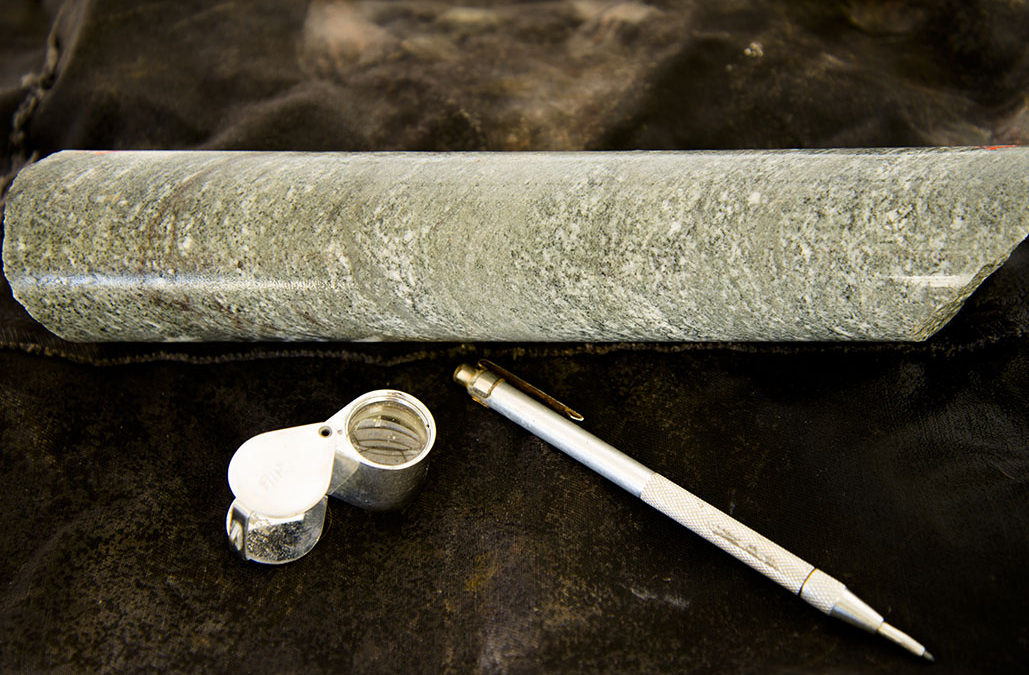 Some of the largest mines in Canada have been developed from volcanogenic massive sulfide (VMS) deposits.

These deposits are extremely sought after for mining because they usually contain a melange of base metals and sometimes precious metals including zinc, lead, copper, silver and gold. The minerals are often clustered together, making them relatively easy to extract.

VMS deposits usually form during periods of rifting, when the earth’s crust is stretched thin due to the pushing and pulling of tectonic plates as they move towards and away from each other. As the crust warms, the ground softens, allowing hot magma to move up towards the ocean floor.

The magma either pushes through the earth’s surface, thus forming a volcano, or causes cracks that draw in sea water. The water is super-heated and imbued with minerals, then expelled to the surface through black and white smokers. These plumes of minerals flowing from cracks in the ocean floor eventually settle back to the ocean the further they move away from the heat source.

The continual activity of the smokers and the deposition of minerals on the seafloor eventually form mineralized beds – the black and white smokers of today will become the VMS deposits of tomorrow. Through plate movements, ancient mineral-rich beds are transposed onto land that was once underwater.

VMS deposits have long been recognized, by both majors and juniors, as potential “elephant” country. And, because of their polymetallic content, they continue to be one of the most desirable because of the security offered against fluctuating prices of different metals.

They can also have long lives. The Kidd mine in Ontario, the deepest base-metal mine in the world, is a VMS deposit that has been in production since 1966.

Twenty economically viable VMS deposits were discovered in the Noranda District over 85 years, including Noranda’s Horne mine in northern Quebec which produced 11.6 million ounces of gold and 2.5 billion pounds of copper from 1927 to 1976.

Agnico Eagle’s flagship LaRonde mine, located in the Abitibi Greenstone Belt of northwestern Quebec, has produced about 6 million ounces of gold since it opened in 2008. La Ronde’s 2.2-km long Penna Shaft is the deepest single-lift shaft in the Western Hemisphere.

Earlier this year, Renforth Resources (CSE:RFR) consolidated a collection of claims at its West Malartic project into a new project it is calling Surimeau.

According to Renforth’s CEO Nicole Brewster, it made sense to separate Surimeau’s four historic polymetallic occurrences from West Malartic, an early-stage copper-silver discovery. Renforth is the first to stake the claims, assemble them and look at the project as a whole.

What’s more, Surimeau is within the same geological setting as Agnico Eagle’s flagship LaRonde mine, a VMS deposit rich in gold.

“There’s an entire trend of VMS mines from LaRonde all the way to Val d’Or, associated with the Cadillac Break,” Brewster says.

Surimeau also has VMS but it is mixed with ultramafic rocks, the kind of deep-seated rocks found in the Earth’s mantle. In layman’s terms, picture a geological environment where the rocks have been mashed together and deformed, and where the sulfide minerals have been moved around – including into ultramafic sills. A sill is a flat, sheet-like intrusion.

Our team observed in field work and thin section study that the volcano-sedimentary assemblage with its intrusive component shows a strong deformation overprint. All rocks are well laminated, locally sheared and tectonically brecciated. When present, sulfides are remobilized into open structures. Field observations and geophysical interpretations support the concept of a previously unmapped regional structure.

Hydrothermal alteration and metamorphism have obliterated the original lithological characteristics.  Current petrographic and geochemical studies will provide further insight into the sequence of events and origin of the fertile rock sequence. At an early stage, calc-silicates, albite rich and peraluminous alteration were clearly identified within and around mineralized areas.

Interviewed by AOTH this week, Brewster says the mineralized occurrences at Surimeau have seen extensive trenching, sampling and drilling. A team of Renforth geologists visited three of the four areas and took grab samples that support the historical exploration findings.

For example, a recent grab sample of 0.49% Ni appears to mesh with nickel halos covering large portions of the volcanic sequence in the range of 0.1 to 0.2% Ni. Historic surface sampling in the Victoria area of Surimeau recorded drill holes values as high as 0.503% Ni.

Brewster reported that a large percentage of the nickel sulfides they are seeing is in the ultramafic rocks, with a smaller percentage in the VMS. The nickel associated with the VMS mineralization is hosted in silicates, not sulfides.

That is an important difference, because sulfide deposits provide ore for Class 1 nickel users which includes battery manufacturers.

Nickel is becoming more and more important as a battery metal due to its use in nickel-cobalt-aluminum (NCA) and nickel-cobalt-manganese (NCM) lithium-ion batteries. Battery companies and auto manufacturers are trying to develop batteries that contain more nickel and less cobalt, which is expensive and difficult to source, with nearly two-thirds mined in the politically unstable DRC. NMC 811 battery cells (8 parts nickel, 1 part each lithium and cobalt) are being produced on a greater scale.

Nickel deposits come in two forms: sulfide or laterite. About 60% of the world’s known nickel resources are laterites. The remaining 40% are sulfide deposits.

The principal ore for these deposits is pentlandite – formed from the precipitation of nickel minerals by hydrothermal fluids. The main benefit of sulfide ores is that they can be concentrated using a simple physical separation technique called flotation. Most nickel sulfide deposits have traditionally been processed by concentration through a froth flotation process followed by pyrometallurgical extraction.

But large-scale sulfide deposits are extremely rare. Historically, most nickel was produced from sulfide ores, including the giant (>10 million tonnes) Sudbury deposits in Ontario, Norilsk in Russia and the Bushveld Complex in South Africa, known for its platinum group elements (PGEs). However, existing sulfide mines are becoming depleted.

Thus, much of the world’s nickel is now being produced from nickel laterite deposits such as those found in Indonesia and the Philippines. Roughly 60% of global available nickel is in laterite deposits – in which weathering of ultramafic rocks has taken place.

Typically nickel laterite deposits are very large tonnage, low-grade deposits located close to the surface. They tend to be tabular and flat covering many square kilometers. They are most often in the range of 20 million tonnes and upwards, with some examples approaching a billion tonnes of material. Due to the different quantities of iron, magnesium and silica in each zone they must be processed differently to cost-effectively retrieve the nickel.

There is no simple separation technique for nickel laterites. As a result, laterite projects have high capital costs and therefore require large economies of scale to be viable.

HPAL – whose performance record has been highly mixed – involves processing ore in a sulfuric acid leach at temperatures up to 270ºC and pressures up to 600 psi to extract the nickel and cobalt from the iron-rich ore; the pressure leaching is done in titanium-lined autoclaves.

The advantage of HPAL is its ability to process low-grade nickel laterite ores, to recover nickel and cobalt. However, HPAL is unable to process high-magnesium or saprolite ores, it has high maintenance costs due to the sulfuric acid (average 260-400 kg/t at existing operations), and it comes with the cost, environmental impact and hassle of disposing of the magnesium sulfate effluent waste.

The Indonesian government has come under criticism for entertaining requests from large nickel miners to dump millions of tonnes of processing waste into the sea.

Back to Renforth’s Surimeau, the fact that the property hosts nickel sulfides including pentlandite – the type of nickel EV battery manufacturers need – and that the project appears to suggest a very large scale – is interesting to us at AOTH.

The project encompasses two trends, separated by a distance of about 20 km. (shown as the dotted orange lines below) In the south the mineralized system is interpreted as striking about 20 km east-west. In the north, the mineralization is thought to extend about 30 kms. The width of this ~50-km-long potentially mineralized swath is estimated at between half a km and 1.5 km.

Because only limited exploration has taken place – grab samples and pockets of drilling – the strike has yet to be determined, but Brewster believes there could be a large nickel deposit waiting to be outlined, along with significant zinc.

“I think there’s significant potential,” she says. “The ultramafics are consistent and coincident with the VMS, what’s happening at subsurface is really the big question mark but the evidence on surface is an impressive enough scale as it is. Hopefully with a bit more work and more rigorous prospecting and sampling, and eventually drilling, we can better quantify that scale, and nail down the system a little better. That’ll help us vector our exploration as well.”

Renforth appears to have assembled a very interesting collection of claims that is worthy of followup. The company is currently in the middle of a 7,200m drill program at its Parbec gold project, also in northern Quebec, but Brewster hopes to “sneak a little more prospecting” at Surimeau in October, before the snow flies.

On Oct. 1 Renforth closes on the $3.2 million financing associated with the sale of its New Alger property, leaving the company with well over $8 million in cash and securities on hand – enough to see it through 2021 with no additional private placement financing anticipated for the foreseeable future.

Nickel’s use in batteries has recently seen headlines with Tesla announcing it is talking to Giga Metals about helping to develop a large mine in Canada, that would give the electric carmaker access to low-carbon nickel for its batteries.

If Renforth has battery-grade nickel at Surimeau and can prove it with drilling, the junior should have no trouble finding financial or operating partners, offering investors a decent and intriguing shot at share price appreciation.