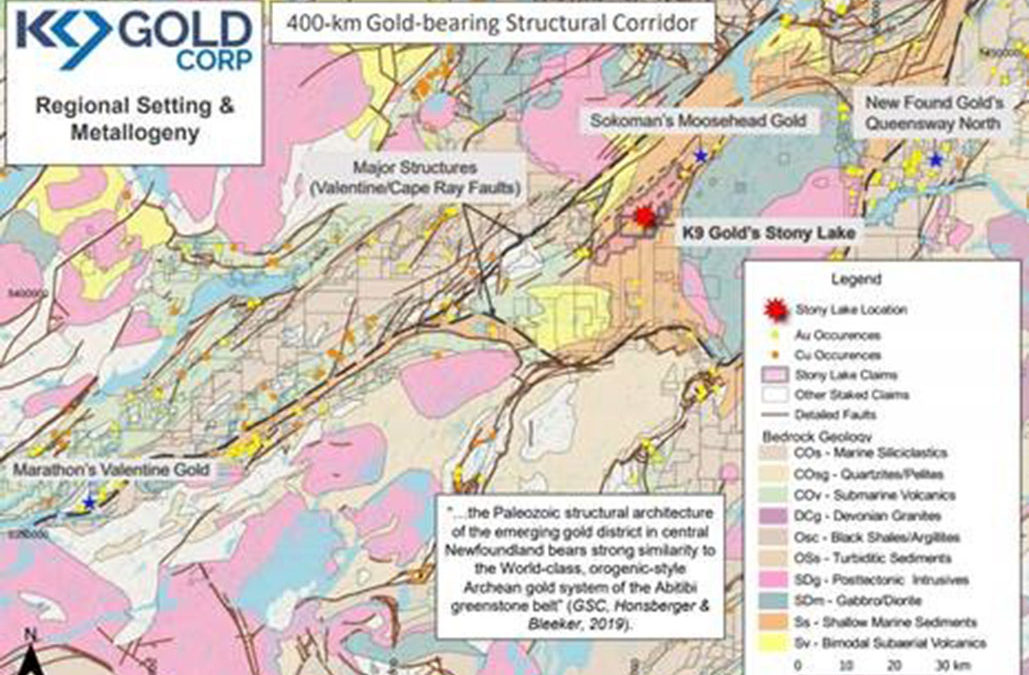 With the winter months right around the corner, K9 Gold Corp. (TSXV: KNC) (FSE: 5GP) (OTC Pink: WDFCF) has made further progress in its ongoing exploration efforts in Central Newfoundland.

The company recently completed the preliminary phase of till sampling at the Stony Lake project, part of a comprehensive exploration program that also includes mapping, orthophotos, LiDAR and VTEM airborne geophysics.

The current program was designed to follow up on K9 Gold’s previous compilation of historical work on the property, which identified a large area of highly anomalous gold values in tills collected in 1989 by Teck Explorations Ltd.

Prior to the 2020 field season, airborne geophysical coverage, followed by ground prospecting and sampling, led to the identification of eight areas of highly anomalous to high-grade gold mineralization targets (15.05 g/t). Mineralization is found both within the Botwood Formation and in the basement rocks below.

The first phase of mapping and sampling to follow up on these anomalous results covering the northeast section of the property has now concluded, with samples shipped for whole rock and geochemical analysis.

Meanwhile, the LiDAR and VTEM surveys — which began last month over the Stony Lake project — have both been completed.

The LiDAR survey was aimed to assist with ground mapping to extrapolate geomorphology and both regional and local geologic structures. This would help K9 Gold develop a more focused approach to mapping, sampling and prospecting programs.

According to the company, large areas of significant gold mineralization occur on the property in altered Botwood sediments and quartz feldspar porphyry intrusives associated with intense silicification, sericite-chlorite-carbonate alteration and a strong pyrite-arsenopyrite mineralogical association.

The VTEM survey was carried out to identify resistivity changes related to alteration/intrusive activity/zones of pyrite/gold mineralization. This would in turn allow the company to define high-priority exploration targets in the basement below the Botwood Group.

K9 Gold has brought in Dr. Andreas Rompel, a seasoned professional with nearly three decades of exploration experience, as a technical advisor to help analyze these results. An expert in structural interpretations, Dr. Rompel previously helped Anglo American with evaluating capital projects for more than a decade.

The Stony Lake project lies within the Cape Ray-Valentine Lake structural trend of Central Newfoundland, parallel to New Found Gold Corp.’s (TSXV: NFG) Queensway project along the prolific Dog Bay Line, where multiple high-grade intercepts have been drilled over the past year.

The entire property covers 13,625 hectares of land and 27 kilometers of favorable trend, sandwiched between two other prominent discoveries in the area: Sokoman Minerals Corp.’s (TSXV: SIC) Moosehead discovery to the northeast and Marathon Gold Corp.’s (TSX: MOZ) Valentine Lake deposit to the southwest (see map below).

Published information on the Moosehead discovery indicates that the mineralization is spatially related to reworking of a major basement structure, likely the main pathway for the mineralizing fluids.

K9 Gold believes that the spatial association of the faulting with mafic intrusives is highly significant. The Moosehead mineralization is hosted by north to northwest trending and east dipping faults, which appear to be related to mesoscale anticlinal folding. These types of mineralizing systems typically have great lateral and depth extents (measured in km).

Recent geophysical work on the Jumper’s Pond area suggests the presence of a large fold structure that plunges to the northeast towards Moosehead, as well as several northwest trending structural features. The presence of mafic rocks is also indicated for this area.

The major fault structure related to the Mooseheads discovery can be traced by regional magnetics for 5 to 6 km onto the Stony Lake property, according to K9 Gold, increasing its confidence in the prospectivity of the Jumper’s Pond area.

Similar structural features have also been interpreted around the Stony Lake property, with the presence of mineralized mafic dikes yet to be confirmed.

Ever since New Found Gold’s major discovery in late 2019 at Queensway, where drilling returned one of the highest grade intercepts ever in the province (92.86 g/t Au over 19 m), Newfoundland has become a hotspot for up-and-coming gold miners.

Many in the industry believe the deep and long structures found along the Central Newfoundland gold belt — where most of the mining activity is happening — hold tremendous potential for numerous multi-million-ounce deposits. The entire belt almost stretches across the entire island, about 250 km in length.

As many five major tectonic breaks including the Dog Bay Line (see map below) have been identified along the Central Newfoundland gold belt. These could be traced back to their origins over 400 million years ago during the Taconic orogeny period, during which a great mountain chain formed from Eastern Canada down through the eastern coast of the United States.

“The rocks in central Newfoundland … from just east of Gander to almost over to Deer Lake just have the right geology for it,” said Derek Wilton, a geologist and an honorary research professor at Memorial University. “You can’t have gold deposits without having the right rocks and the rocks are good.”

“Over the past 10 years, Marathon Gold’s success has opened people’s eyes to the potential for Newfoundland – and the Maritimes in general – to host large-scale gold deposits,” Marathon CEO Matt Manson once said. The recent discoveries by New Found Gold and Sokoman Minerals have further helped to validate this belief.

According to Manson, the Central Newfoundland area was dominated by base metal mining for so many years, but the search for large, open pittable gold deposits is relatively new.

This presents a “golden opportunity” for those exploring in the area including K9 Gold, whose Stony Lake project is right in the vicinity of those high-grade discoveries.

The prospective gold plays in Central Newfoundland are also garnering attention from the leading resource investors.

Palisades Goldcorp, a Canadian merchant bank that specifically focuses on junior and micro-cap gold miners with promising projects, is a firm believer in the province’s gold potential and has provided serious financing for projects in this area.

The bank is currently the largest shareholder in New Found Gold, and recently also became a majority holder of Labrador Gold Corp. (TSXV: LAB), whose Kingsway project lies along strike to the northeast of New Found Gold’s Queensway discovery.

K9 Gold, too, has received backing from Palisades, having secured a private placement of nearly $1.04 million to accelerate its ongoing exploration at Stony Lake.

The sheer number of explorers that have gathered in Central Newfoundland in recent years presents a compelling case that this could be the next major gold camp in Canada.

The success stories of New Found Gold, Sokoman Minerals and Marathon Gold have all proved their investors right thus far; and this is only the beginning, as much of the area remains largely underexplored.

By securing a property situated right between those groundbreaking discoveries, K9 Gold’s Stony Lake may be the next in line. This strategic location gives the company a first-mover competitive advantage within one of Canada’s emerging mining regions, providing a headstart on testing and surveying of target areas.

The fact it received an investment from Palisades, which is backed by some of the industry’s most notable financiers, is a sign of more things to come.

Richard does not own shares of K9 Gold Corp. (TSX.V:KNC). KNC is a paid advertiser on his site aheadoftheherd.com