Impressive exploration upside with Palladium One

Palladium One Mining (TSX-V:PDM, FRA:7N11)  is exploring for platinum group elements (PGEs) at its LK Project in north-central Finland, and for nickel, copper and PGEs at its Tyko property near Marathon, Ontario. 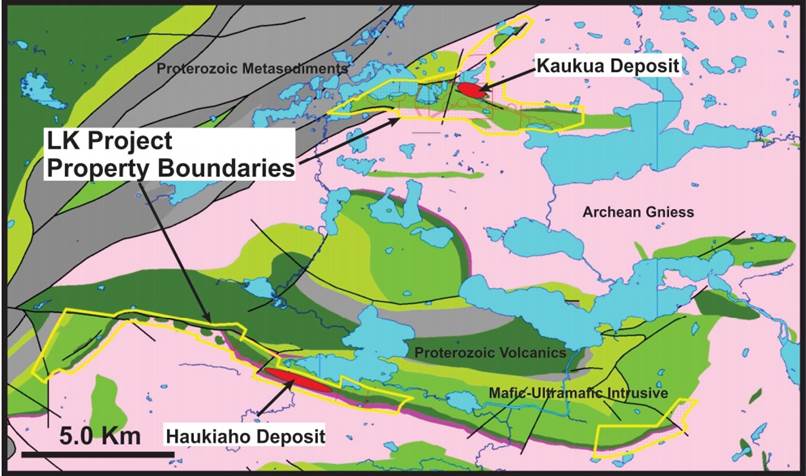 The company is focused on its LK Project in Finland, where surface chip samples tested recently from Haukiaho and Murtolampi, two of the LK Project’s target areas, show promising PGE mineralization.

On Monday PDM updated investors on 2019 exploration work so far at LK.

“We are very encouraged by the reconnaissance sampling that identified PGE mineralization ~2 km east of the historic Haukiaho deposit which supports our conviction that Haukiaho not only extends to the west, but also significantly to the east, making it highly prospective for the definition of a significant open pit resource,” said Derrick Weyrauch, Palladium One’s interim president and CEO, in the Aug. 12 news release.

He added: “Murtolampi is a high priority target for the Company and we are extremely pleased with the excellent reconnaissance sample which yielded 0.78% Cu, 0.13% Ni and 3.106 g/t PGE.” 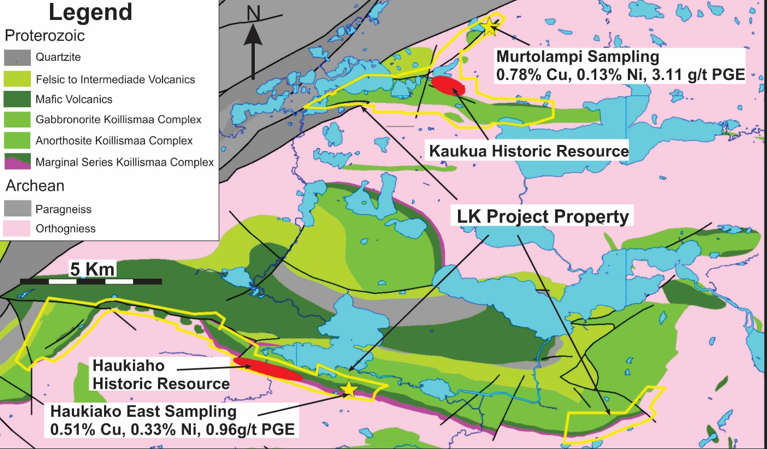 For AOTH subscribers, the important take-away from this news release, and really the entire story of Palladium One, is the tremendous exploration potential of the  LK Project, which is predominantly a palladium play, and the earlier-stage Tyko nickel sulphide-centric property.

To understand why investors should put Lantinen Koillismaa (LK) on their radar, we need to first of all place the project in geographical and geological context.

Both Kaukua and Haukiaho have historical resource estimates (RE) (ie. not NI 43-101-compliant)

At Haukiaho, an inferred RE, also completed in 2013, showed 23.2 million tonnes of 0.53 g/t combined PGEs and gold, with tracings of copper, nickel and cobalt.

The LK Project has the rocks that few copper-nickel-platinum group elements (Cu-Ni-PGE) deposits can boast.

The geology dates back to the early Palaeoproterozoic era, ~2.4 billion years ago, during which continental rift-related igneous activity produced several mafic-ultramafic intrusions containing palladium-rich Cu-Ni-PGE sulfide minerals, chromium, as well as iron-titanium-vanadium. Continental rifting events have produced some of the largest Cu-Ni-PGE deposits in the world including the Duluth Complex in Minnesota, Pechanga and Norilsk in Russia, and China’s Jinchuan deposit. 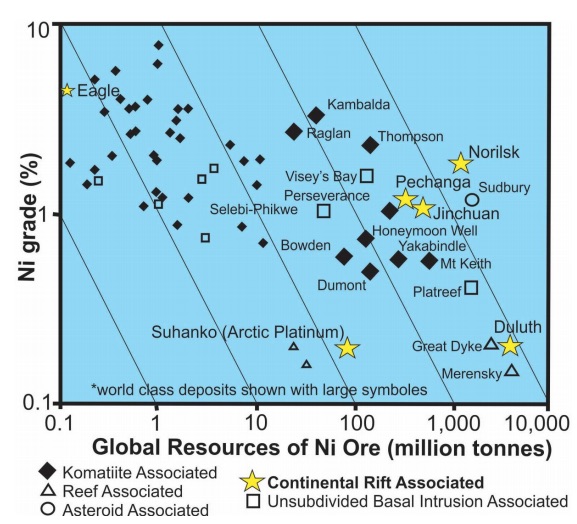 They are relatively rare compared to other nickel deposit types, and often contain high PGE grades – such as Norilsk, Duluth and Eagle – a high-grade underground mine in Michigan acquired by Lundin Mining in 2013. 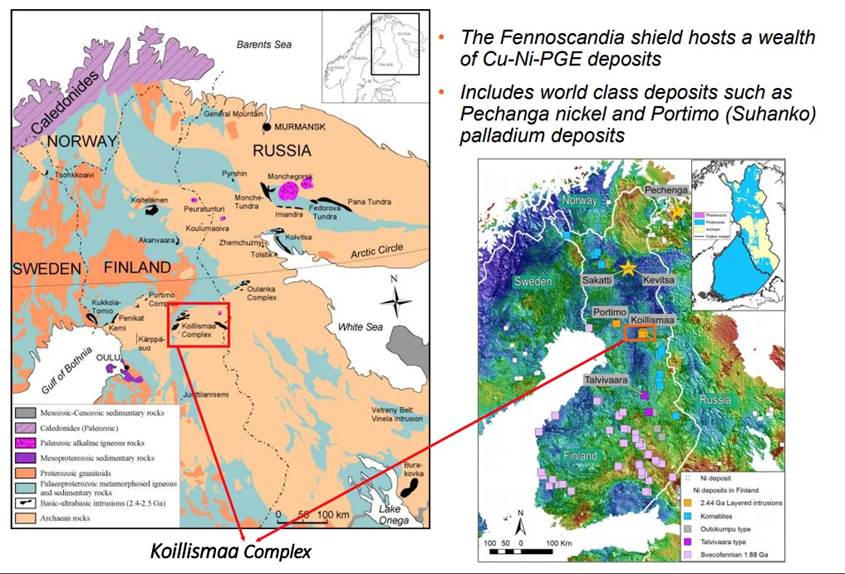 Several of these Paleoproterozoic rift-related mafic-ultramafic intrusions occur in an area known as the Fennoscandia shield (from the Latin words Fennia for Finland and Scandia for Scandinavia) This is “elephant-deposit country.”

The Fennoscandia shield includes a number of large Cu-Ni-PGE deposits including Pechanga on Russia’s Kola peninsula, Kevitsa, Sakatti, and the Portimo Complex located 90 km to the northwest of LK.

The Portimo complex is of similar age to the Koillismaa layered complex, which hosts the LK Project, and is thought to have been formed by the same rifting event.  These intrusions represent the roots of what was one a large igneous province. Such large fluxes of magma through these “roots” enables the formation of large-scale Cu-Ni-PGE deposits.

Historical exploration at LK goes back to the 1960s. About 35 kms of Koilissmaa’s “basal (base) contact” was mapped and reconnaissance-drilled (81 holes/11,514m) by majority-state-owned Outokumpu for copper/ nickel and later by GTK for Cu-Ni-PGE mineralization. GTK, the Geological Survey of Finland, punched in a series of widely spaced, short (typically ~ 30 meters depth) drill holes that demonstrated anomalous Cu-Ni-PGE mineralization along the entire 35 km’s of basel contact. And there in lies the exploration opportunity, the upside.

These promising intersections were never followed up. Finland’s mining law was changed in the 1990s, mineral exploration was managed by the government. It’s easy to see why Koilissmaa was not considered a priority. The nickel and copper grades weren’t high enough in relation to base metals prices to create much buzz. And PGEs weren’t significant until the 1980s with the discovery of Stillwater, a large layered mafic intrusion in southern Montana.

It was around the same time that the Geological Survey also discovered -PGE mineralization  at Portimo, which put Koiliismaa on the back-burner. While the Koillismaa deposit’s PGE content was recognized, it sat dormant until the mid-2000s, when private mining companies began to take an interest.

Still, only about 20,000m of the LK Project has been drilled since 2001, mostly at the Kaukua deposit.

Now, with the price of palladium significantly higher than previous exploratory periods, Koillismaa, and the LK Project, is enjoying something of a rebirth.

Demand for the catalytic converter ingredient has surged since 2016 with the movement away from diesel-fueled vehicles, which pollute more. The price has more than doubled over the last three years (+124%) and ran up 18% in 2018. 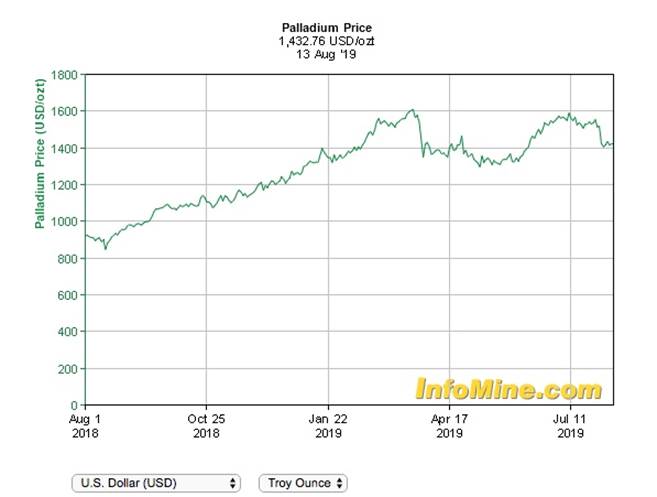 Autocatalyst demand accounts for three-quarters of palladium demand. The metallic element is also facing restricted supply. 2018 was the seventh year in a row that palladium was in deficit because of strong vehicle sales.

2019 production is expected to trail consumption by 545,000 ounces, and there is limited scope for producers to increase supply, in the near term.

As drivers shift from diesel to gas-powered cars or hybrids, the market for palladium used in gasoline engines will expand. Contrary to what many on the eco-side of the political spectrum believe, gas-powered vehicles will be with us for quite some time as the world economy transitions to electric vehicles. Much more palladium then currently used will go towards E/ ICE hybrids because of the ‘range anxiety’ drivers feel when setting out on EV trip and to meet the much stricter new emission regulations on ICE powered vehicles.

Back to the LK Project, the presence of higher-priced PGEs offsets the relatively low grades of the other metals and makes the deposits very interesting indeed.

Palladium One is looking to build tonnage throughout the 2,500 sq. km property, key to their plans is Kaukua.

Palladium One’s immediate goal is to produce a new NI 43-101-compliant resource estimate from historical exploration data. To do that, over 100 historical core samples have been sent off for re-assaying. The results of the new resource estimate, at Kaukua, are due out in early September.

Another objective is to at least double the Kaukua resource through exploration at other target areas of the LK Project, like Murtolampi, described below. Only about one kilometer of an 8-km strike length has been drilled, and some holes host impressively thick “fault-stacked basal units” of greater than 100m. There is also the potential for a parallel zone to the south of Kaukua. 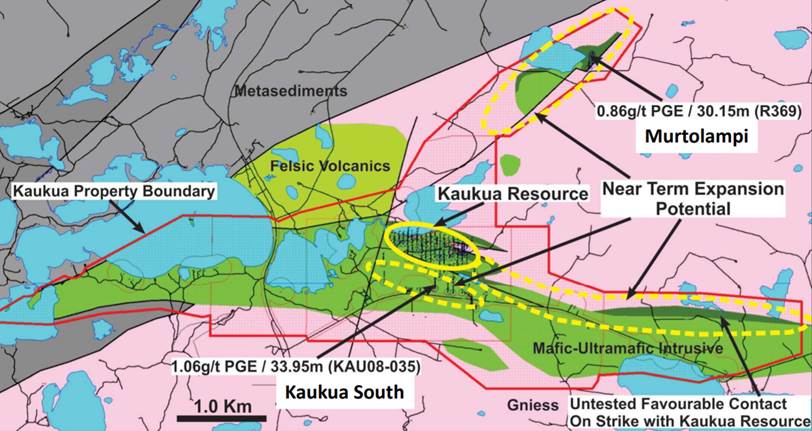 The largely unexplored area has about a 10-km strike length. While historical prospect drilling by GTK found multiple anomalous holes along the entire strike, the higher-grade shoots/ pods were not targeted and no modern induced polarization (IP) survey has been done.

It’s interesting to note that, back in the 1960s, GTK brought in a portable (truck-mounted) flotation concentrator to test the metallurgy of material blasted out of a small test pit about 2 km east of the current historic Haukiaho resource, this and 4 nearby short holes returned promising copper nickel grades but PGEs were never analyzed. Chip samples recently taken from this pit returned grades of 0.525 g/t and 0.957 g/t of PGE (palladium + platinum + gold) indicating the PGE mineralization extends well beyond the historic Haukiaho resource.

Comparing the structure of the two deposits, Haukiaho is currently more extensive  than Kaukua but not as continuous, with discrete pods of mineralization present. Palladium One plans to start exploring the higher-grade intercepts and step out from there.

“These historic resources indicate that Haukiaho mineralization possesses pods/lenses of higher-grade material and with focused drilling could result in a higher-grade 43-101 compliant resource being defined,” PDM stated in the Aug. 12 news release.

“We are very encouraged by the reconnaissance sampling that identified PGE mineralization ~2 km east of the historic Haukiaho deposit which supports our conviction that Haukiaho not only extends to the west, but also significantly to the east, making it highly prospective for the definition of a significant open pit resource,” Derrick Weyrauch, Palladium One’s interim president and CEO, said in the news release.

A third sample taken from the Murtolampi  target showed quite a bit higher grades, 3.106 g/t PGE (Pt + Pd + Au), opening up the possibility of the Kaukua mineralization extending north to Murtolampi, which has seen some historical exploration.

“Murtolampi is a high priority target for the Company and we are extremely pleased with the excellent reconnaissance sample which yielded 0.78% Cu, 0.13% Ni and 3.106 g/t PGE.” Derrick Weyrauch, Palladium One’s interim president and CEO

PDM’s earlier-stage Tyko Project is also worth a mention for its high-tenor nickel potential. Tyko is located in northwestern Ontario around 25 km north of the Hemlo mine, and 55 km from the Marathon deposit which hosts a measured and indicated resource of 3 million ounces palladium and 618 million pounds of copper. 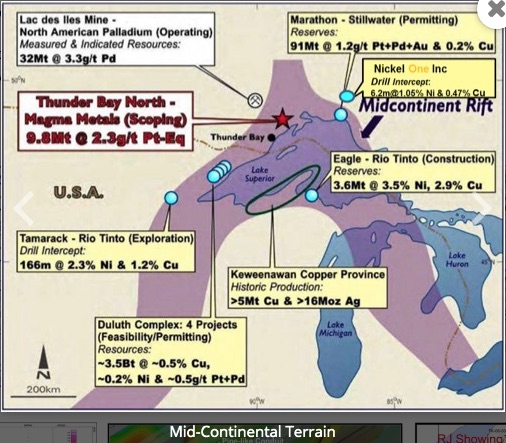 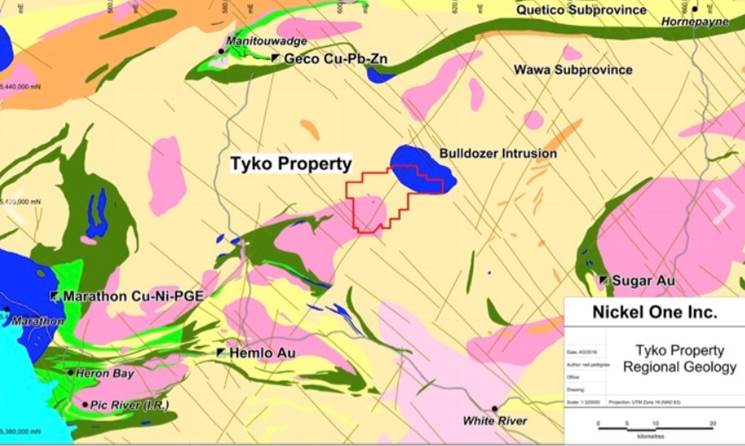 A 2016 winter drill program (14 holes, 1,780m) expanded historic showings and delivered the best nickel, copper and PGE grades to date. Palladium One plans to do some geophysics at the holes with high-grade nickel intercepts. The project has been airborne-surveyed but requires further geophysics.

Palladium One has two projects on the go, both with what we at Ahead of the Herd  believe are miles and miles of blue-sky potential. We know that palladium and nickel are both in-demand metals for the foreseeable future, nickel for its use in batteries and stainless steel, and palladium as an important ingredient of catalytic converters found in gas-powered/ hybrid vehicles. Despite what the greenies say, gasoline-fueled cars aren’t going away any time soon, and in fact palladium-rich hybrids could play a key role in the transition from conventional to electric vehicles and in meeting much stricter new emission rules for ice powered vehicles.

At the LK Project in Finland, previous operators have really just scratched the surface of what could be an immense PGE-rich deposit on the scale of a Suhanko or Duluth Complex. The two deposits, Kaukua and Haukiaho, are both open in all directions. Previous drill results look good, and our musings of large-scale tonnage worthy of an open-pit, are backed by recent chip samples collected about 2 km from the Haukiaho resource.

Less work has been done at Tyko in Ontario, but we love the high nickel tenors. The 2016 drill results look promising. Two great projects concentrated on two minerals critical to our future transportation needs. Add in a previously announced share consolidation, whereby the number of outstanding shares were cut in half, and an oversubscribed private placement that raised $1.352 million, and Palladium One is starting to look very interesting. I will continue to watch this exciting exploration story unfold in the weeks ahead.

Palladium One Mining (TSX-V:PDM, FRA:7N11) is an advertiser on Richard’s site aheadoftheherd.com.

Positioning for the next precious metals up-leg

Dolly Varden through just over 25% of 2022 drilling; focus is on silver and gold targets at the newly consolidated KItsault Valley Project 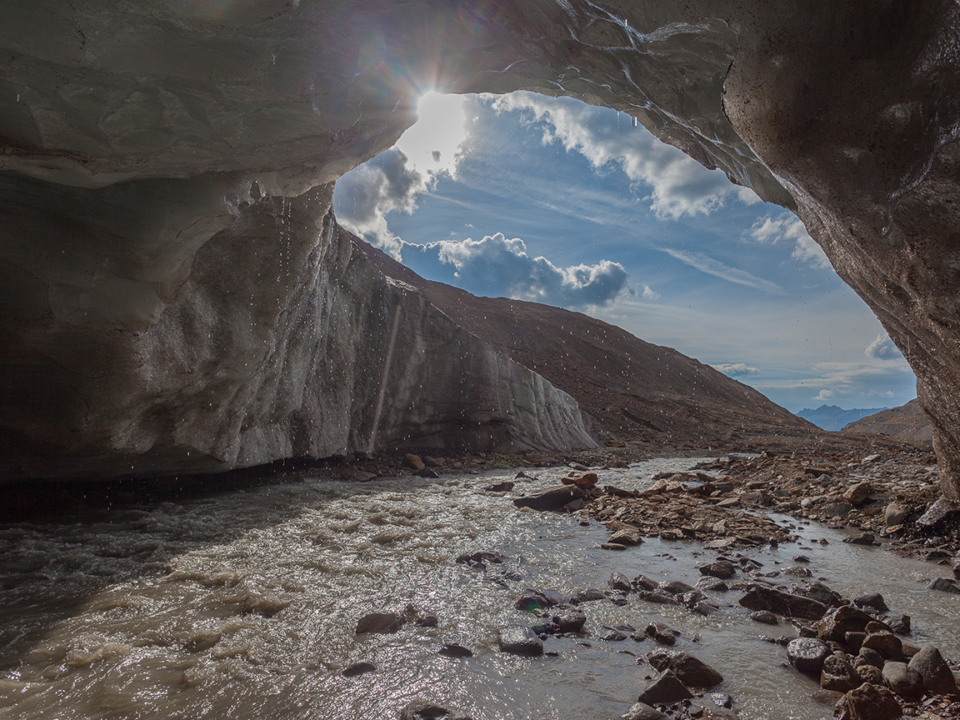