Silver is expected to begin the next decade newly burnished, through a combination of higher industrial and investment demand, and tightened supply owing to mine production issues and output cuts.

As December winds down and precious metals trade volumes dwindle, market analysts including us at Ahead of the Herd are crunching the numbers from 2019 and looking ahead to what the New Year might bring.

Without hesitation we can say that 2019 has been an excellent year for gold and silver. Both metals traded flat during the first half, then bolted significantly higher after the US Federal Reserve reversed course and began cutting interest rates instead of raising them. Starting in July, the Fed lowered rates three times before freezing the (benchmark) federal funds rate at a range of 1.5 – 1.75% in November.

That, along with similarly dovish policies among other central banks, a record $17-trillion of negative-yielding sovereign bonds, and fresh safe haven demand due to tensions with Iran, and a lack of progress on trade talks, to name two key issues, powered precious metals to new heights.

Spot gold and silver both peaked in early September at a respective $1,552.00/oz and $19.67/oz. Metals Focus, a precious metals firm quoted by Kitco, estimates silver will average 3% higher this year compared to 2018. While gold has outperformed silver over the past 12 months, rising around 15% to silver’s 11%, some market observers are picking silver to be the precious metal to beat in 2020. 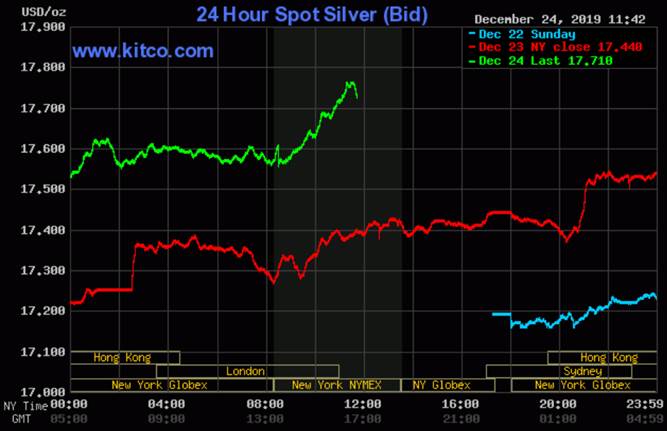 One analyst who spoke to Kitco is sanguine on silver due to its industrial component. “We are optimistic on the prospect for gold, but we think it will pay off more for those who are to purchase silver. We think the industrial demand side of the equation will improve later in the year,” a commodities strategy at TD Securities said earlier in the week.

The same analyst thinks the gold-silver ratio in 2020 could improve for silver – although the current ratio of 86:1 is below the 26-year high reached in June. 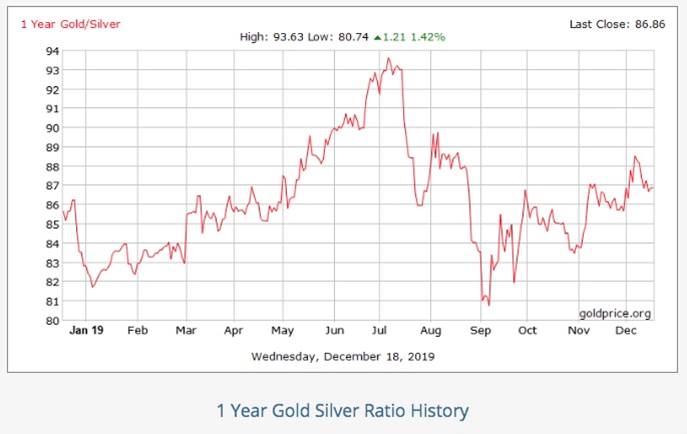 The gold-silver ratio is simply the amount of silver one can buy with an ounce of gold. To find the ratio, divide the current gold price by the price of silver.

On June 12, the gold-silver ratio hit a 26-year high by breaking through the 90-ounce mark – meaning it took over 90 ounces of silver to purchase one ounce of gold. The higher the number, the more undervalued is silver or, to put it another way, the farther gold is pulling away from silver, valued in dollars per ounce.

The gold-silver ratio tells us, as precious metals investors, which is under-valued (or over-valued), silver or gold? For example at the current ratio of 86:1, a trader who has an ounce of gold could sell his gold for 86 ounces of silver.

The main factors that will determine silver’s fate next year, are whether or not there is a full resolution to the US-China trade war (a complete deal, to follow the recent phase-one agreement, would be bullish for the world economy, and boost demand for all metals including silver); global growth prospects, particularly in sickly Europe; the relative strength of the US dollar; bond yields; and whether central banks continue to keep a firm lid on interest rates.

Since very little gold is used by industry, it trades as an investment commodity – moving up and down in relation to factors like the dollar, inflation, interest rates and sovereign bond yields.

It’s estimated around 60% of silver is utilized in industrial applications, leaving only 40% for investing. And of the 60% demanded by industry, 8 of 10 ounces is either used up in manufactured products, or discarded in landfills.

This also explains silver’s volatility. Because the investment market for silver is so small (60% is locked up in industrial uses) it swings up and down wildly with relatively low volumes. A lower dollar and continued economic and political turbulence (consider the upcoming Brexit date and the unfolding impeachment process in the US) would support silver prices.

While silver’s performance has disappointed investors for going on a decade, many forget it rose spectacularly between 2000 and 2010, climbing well over 900%, and easily outpacing gold which “only” gained 600% during the same time frame. In April 2011 spot silver hit $55.59 an ounce, more than triple its current value. 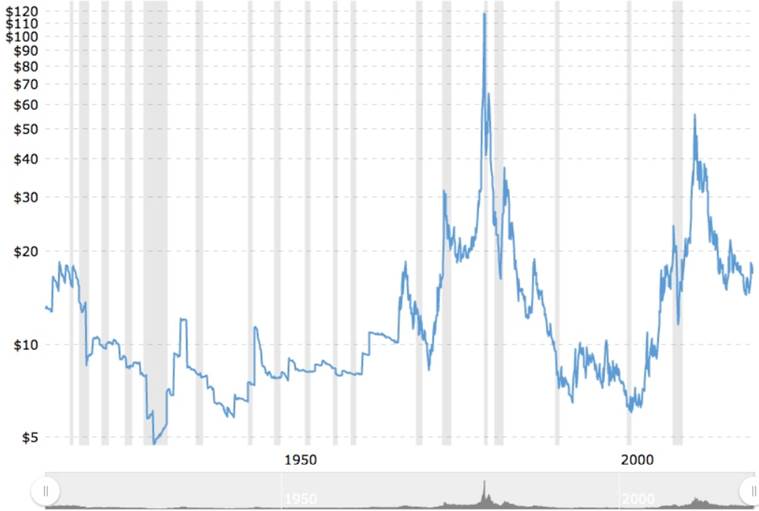 Also, consider this: last year some 840 million ounces of silver were produced worldwide, compared to 108Moz of gold. Assigning $14 an ounce for silver and $1,400/oz for gold works out to a $13-billion-a-year industry versus $156 billion annually for gold – making the gold market 11 times larger than silver.

Underpinning silver’s fine showing this year and likely, into next, are a number of important uses, beyond what people normally think of when they imagine silver, as for example jewelry or investable silver coins/ bars.

A record amount of silver was sought in 2018. According to the Silver Institute’s annual survey, total physical demand last year rose 4% to 1,033.5 million ounces – a three-year high. The need for silver was driven mostly by purchases of bars and coins, jewelry and silverware, particularly in India.

Silver’s unique properties make it ideal for a number of industrial applications – almost as many as oil. The metal is strong, malleable and conducts heat and electricity better than any other material. Gold also has these properties but it is too expensive to use in circuit boards, solar panels, electric cars, etc.

Over 50% of silver demand comes from industrial uses like solar panels, electronics, the automotive industry and photographic applications.

Indeed more and more silver will be demanded for its use in solar photovoltaic cells, as countries move further towards adopting renewable energy sources. Around 20 grams of silver are required to build a solar panel. The Silver Institute predicts 100 gigawatts of new solar facilities will be constructed per year between 2018 and 2022, which would more than double the world’s 2017 capacity of 398GW.

A recent study by the University of Kent found that rising demand for solar panels is driving up silver prices. 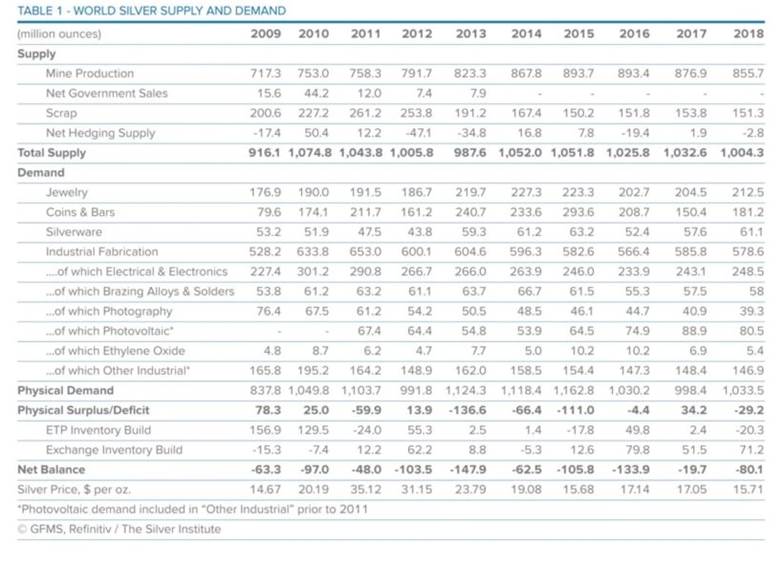 According to Americas Gold and Silver, a Toronto-based precious metals producer, between 2017 and 2018, silver production across the sector fell 15%, the volume of processed ore slid 14%, and there was a 13% increase in the cash costs per ounce of silver. It’s important to note here, that the average head grade at silver mines has fallen by over 50% since 2010 – cutting into miners’ profitability.

The solution is to find new high-grade production, but the problem – like for gold – is finding enough world-class, multi-million-ounce deposits to make up for the lower grades and lesser mine output.

Silver production fell by 2% last year to 855.7Moz, the third consecutive drop after 13 years of uninterrupted supply growth. The 2019 World Silver Survey attributed the loss to falling production at lead and zinc mines; 75% of silver is mined as a by-product, mostly of gold, copper, lead and zinc.

As for 2019, mine supply from the top three silver-producing countries, Peru, Chile and Mexico, all dropped in the first half of this year. Data collected from each country showed Peru’s H1 silver production was down 10%, Chile’s fell 7% and Mexico’s saw a 4% decrease from January to May. 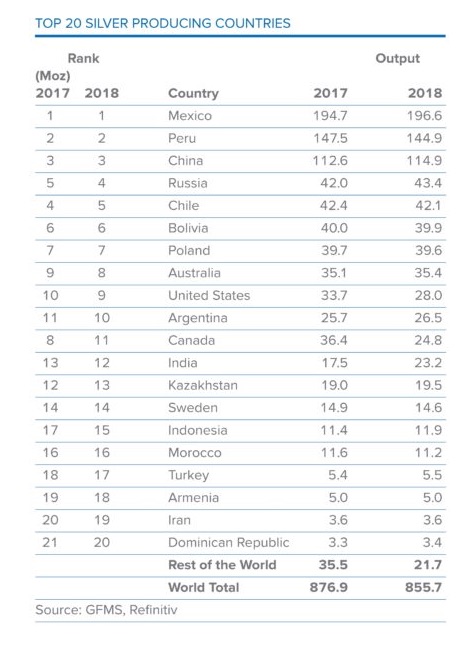 Four of the top five silver producers have shown considerable declines in mine supply, including Russia’s number one producer, Polymetal International, whose production during H1 2019 tumbled 14%. In October the world’s largest silver miner, Fresnillo Plc, admitted its annual silver and gold guidance would be at the lower end of an already reduced target, after reporting a fall in output during the third quarter, because of lower ore grades. Q3 silver production fell 14.5% and gold production slumped nearly 7%.

The 2018 narrative of shrinking silver supply due to falling production at lead and zinc mines, where silver is mined as a by-product, is just as relevant. As of November 2019, zinc and lead are both in terribly short supply in London Metal Exchange warehouses. At just 27,800 tonnes, zinc stocks are at their lowest in 20 years. Lead stocks are higher at 70,075 tonnes but have not rebuilt significantly from July’s decade low of 55,475t, CNBC reported.

The International Lead and Zinc Study Group blames supply bottlenecks for keeping lead and zinc (and silver) in deficit this year. The group widened its 2019 expected zinc supply deficit to 178,000 tonnes, from its earlier 121,000 tonnes prediction. 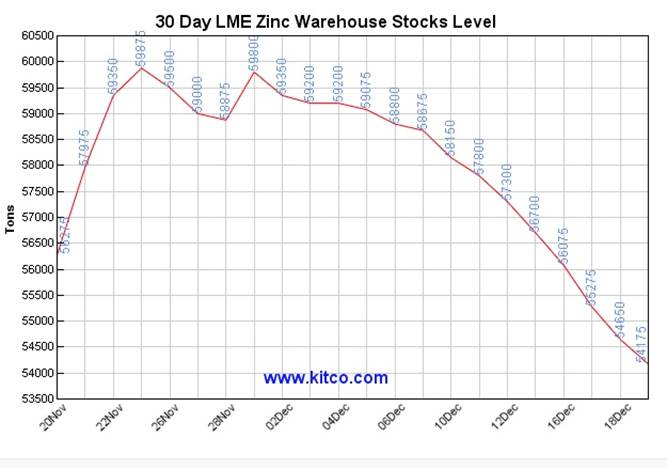 Recall that only 25% of silver production originates from primary silver mines. The rest is mined as a by-product of gold, copper, zinc and lead deposits. Silver exploration companies with pure-play silver projects are therefore rare, and typically trade at a premium to gold equities.

Companies with polymetallic mines that produce silver as a by-product are also highly desirable as an investment, especially during the current period of falling silver mine production.

Industrial demand for silver, particularly photovoltaics, is heading up, and should get another lift if and when the trade war with China is put to rest. Investment demand for silver also looks solid, with no end in sight to the low-interest-rate policy direction of central banks.

Add higher demand to shrinking supply, lower grades, and less silver by-product credits from falling lead and zinc mine production, we see a floor forming under silver prices, evidenced by a year-to-date gain of 8.6%.

Gold prices are holding up very well in the face of a Phase One trade deal with China, a continued strong dollar and higher interest rates in the US then elsewhere. At AOTH we do not believe the gold price is going to fall, quite the opposite actually.