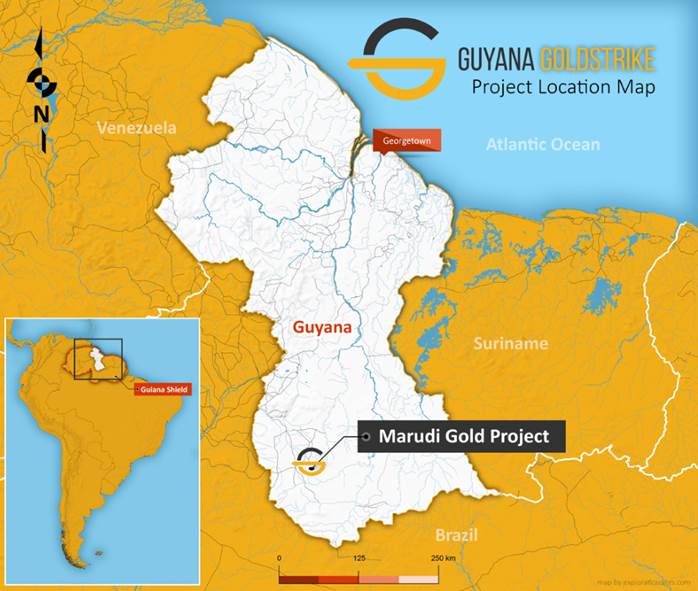 The rocks of the 1.7 billion-year-old formation consist of greenstones overlain by sub-horizontal layers of sandstones, quartzites, shales and conglomerates intruded by sills of younger mafic intrusives such as gabbros.

The relatively unexplored southwestern part of the country is the focus of Guyana Goldstrike (TSX-V:GYA), which is developing Guyana’s first gold-hosted banded iron formation.

Gold in banded iron formations make excellent exploration targets because of their scalability. Like VMS deposits, they are often found in clusters, something that is attractive to major gold companies looking for new deposits that can be developed into mines with longevity.

The best example of a gold-bearing banded iron deposit is the shuttered Homestake mine in South Dakota. The elephant-sized deposit was the largest and deepest gold mine in North America before it closed in 2002. Between 1878 and 2001 Homestake produced an incredible 43.9 million ounces.

Two other good examples are the Lupin mine in Nunavut, also depleted, which produced about 3 million ounces, and the Musselwhite mine in Ontario, one of the largest gold mines in Canada with 1.85 million ounces in reserves. Goldcorp mines about 265,000 ounces a year from the banded iron formation that hosts the ore, which is composed of coarse almandine garnets in fine-grained grunerite.

A total of 42,000 meters of historical drilling has been completed at Guyana Goldstrike’s flagship Marudi Gold Project by previous operators since 1985, or 141 drill holes. Past exploration has delineated two zones of mineralization – Mazoa Hill and Marudi North – with a recently discovered third zone at an area named Toucan Ridge.

Just over a year ago, Guyana Goldstrike commissioned a new resource estimate to verify previous work done at the Mazoa Hill zone. The NI 43-101-compliant report delineated 259,100 ounces of gold at 1.8 grams per tonne (g/t) in the indicated category and 86,200 ounces inferred grading 1.6 g/t.

The 50-square-kilometer property is 85% unexplored – leaving plenty of upside for the company and investors. And it comes with an 18-year mineral license.

Recently Guyana Goldstrike released assay results from Phase 1 of its 2018-19 exploration program. Phase 2, which includes 2,500 meters of diamond drilling, is expected to begin soon, as Guyana’s rainy season comes to a close.

The first phase of exploration entailed the digging of 18 trenches totaling over 2,500 meters, with some 850 samples collected and sent to an assay lab. 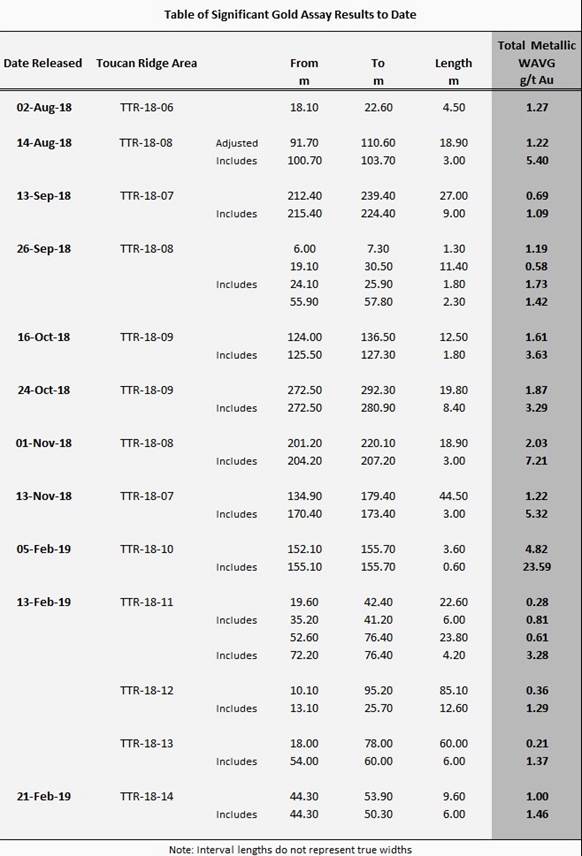 Just as important in terms of exploration upside, Phase 1 picked out five new 3D magnetic targets based on the identification of quartzite-matachert in the host rock, which is an important indicator mineral for gold at Marudi. The same material was found in a 250m length of host rock that extends southeast of Toucan Ridge, and northeast of Toucan Ridge at East Marudi. Sixteen 2D magnetic targets were also selected for further exploration.

Finally, a 5-kilometer anomalous magnetic trend was identified at Mazoa Hill, the zone where the resource estimate was compiled. According to Guyana Goldstrike, Mazoa Hill is less than 10% drilled.

The second phase of exploration, 2,500m of drilling at Toucan Ridge, will target seven priority areas identified by previous geophysics, trenching and outcrops (a series of outcrops along a 1.1-kilometer section of a magnetic anomaly that extends for 1.7 km north of Mazoa were discovered earlier this year).

If all goes well, Guyana Goldstrike says it may expand its diamond drill program beyond the initial 2,500m. The end game is to find a million ounces or more – enough to interest a gold major in a buyout.

The company’s industry on the ground has been matched with the addition of new blood in the boardroom. Earlier this week GYA announced that Robert Stuart (“Tookie”) Angus will join the firm as an advisor to the board of directors.

The current chairman of San Marco Resources, K92 Mining and Kenadyr Mining, Tookie Angus is a well-respected senior executive and thought leader in the mining industry. For the past 40 years, Angus has focused on structuring and financing significant international exploration, development and mining ventures. Indeed his CV is chock full of mergers and acquisitions (M&A) successes, including:

The president and CEO of Guyana Goldstrike, Peter Berdusco, had this to say about Angus’ appointment:

“With exploration and resource development moving forward at our Marudi Gold Project, the need to grow our team with industry experts has never been more important. Mr. Angus’ extensive mining experience in the base and precious metals resource sectors brings to Marudi the required acumen needed for success. Having Mr. Angus available to us is invaluable. We welcome him onboard.”

The addition of Tookie Angus to GYA’s board of directors is a tremendous vote of confidence for the company and what it’s doing in Guyana. And let’s not forget, when Guyana Goldstrike reached out to Zijin Mining – the largest gold company in China – looking to fund an exploration program, the gold major came through with a substantial $3.2 million – in exchange for a 24% stake.

To be clear, the funding is through Gold Mountain Assets, which manages Zijin’s Global Fund and its Midas Exploration Fund.

As I’ve said before, Guyana Goldstrike has everything I like to see in a gold junior: Historical drilling showing mineralization, ample upside, a safe jurisdiction to invest in, an experienced management team and high institutional/ insider ownership.

Marudi is a gold-hosted banded iron formation; we know this kind of gold deposit has legs. We already have a resource at Mazoa Hill, prospectivity at Marudi North, and a very promising new zone at Toucan Ridge. If all goes well this year GYA could have a million ounces and two pit outlines. There are additional targets to the east and the west. And the company doesn’t have any competition; it has 100% of Marudi and has a lock on the rest of the trend.

I’ll be watching GYA closely over the next few months, and anticipating a steady news flow as the drills pierce Toucan Ridge for the first time.

Richard owns shares of Guyana Goldstrike and GYA is an advertiser on Richards site aheadoftheherd.com