Guyana Goldstrike (TSX-V:GYA) has come across very prospective new ground at its Marudi Gold Project in Guyana, as it identifies targets for its 2019 drill program in the small country wedged between Venezuela, Brazil and Suriname. 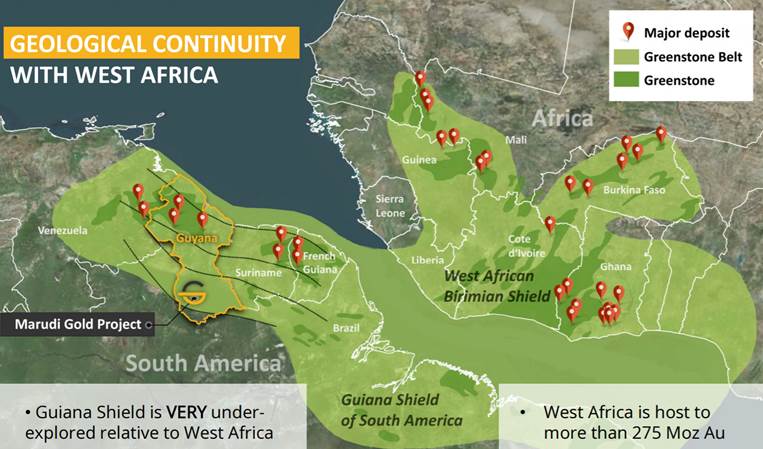 The junior gold explorer put out a press release on Tuesday saying it has identified a series of outcrops along a 1.1-kilometer section of a magnetic anomaly that extends for 1.7 km north of MazoaHill – where GYA has compiled a resource estimate. Only about 7.5% of the 5-km linear trend has been drill-tested.

The outcrops were found to contain quartzite-metachert in the host rock, which is an important indicator mineral for gold at Marudi. That’s because, as a gold-rich banded iron formation, “Gold occurs within the magnetite-hematite rich quartzite and in the magnetite-silicate iron formation,” Guyana Goldstrike states, adding that:

“Mineralization of the host rock may be affected at surface by the erosion at different levels of the strata. Therefore, all discoveries of quartzite-metachert on the Property are considered important for the potential of containing mineralization at surface and/or at depth and should be explored through trenching and drilling.” 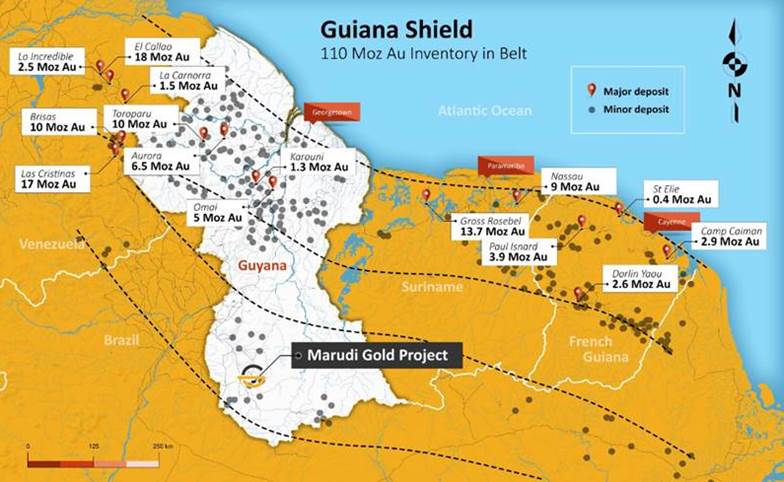 Identifying and mapping several weathered outcrops of magnetic quartzite-metachert within 1.1 kilometers, GYA’s geologists took 25 grab samples from four of the outcrops. Assays showed gold grades up to 1.04 grams per tonne.

A total of 42,000 meters of historical drilling has been completed at the Marudi Gold Project by previous operators since 1985, or 141 drill holes.

It was also decided last summer that conducting an airborne geophysical survey would provide valuable information about the project that trenching is unable to. 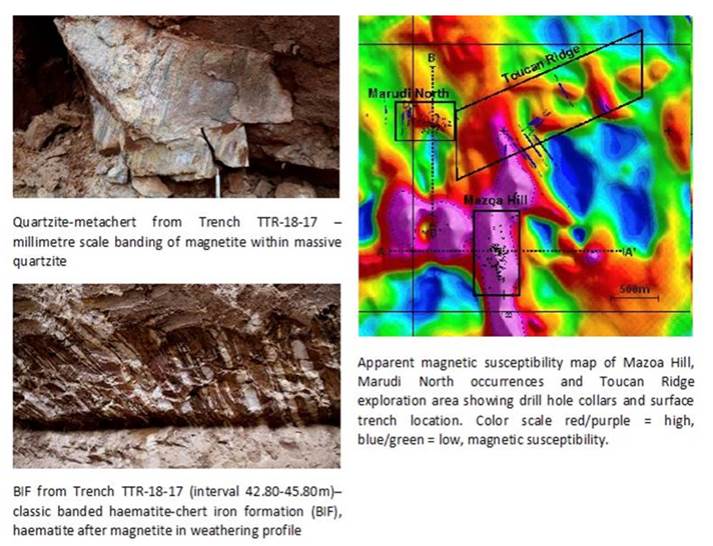 The survey – the first of its kind ever conducted on Marudi – covered the entire 5,463 hectares, including the previously drilled Mazoa Hill and Marudi North zones, plus all the areas that have been trenched, sampled and mapped.

“The geophysics interpretation has greatly advanced our understanding of the controls on gold mineralization on the Marudi Gold Project and identifies priority targets to both expand the known mineral resource and discover new occurrences.” Peter Berdusco, CEO Guyana Goldstrike

The results showed a strong correlation between rock that is highly magnetized underground (a marker for gold mineralization), and previous drilling at Mazoa Hill and Marudi North. Magnetic anomalies along Toucan Ridge – a new bedrock target about a kilometer north of Mazoa Hill – correlated with gold anomalies identified by trenching at surface.

The airborne geophysical survey also found new targets along strike and deeper than the known mineralization at Mazoa Hill and Marudi North, under the trenched areas along Toucan Ridge, and at several magnetic anomalies found throughout the property.

Mineralization at Marudi is related to gold-hosted banded iron deposits that occur in other greenstone belts around the world. These deposits can be remarkably long-lived with sizeable gold production.

Gold in banded iron formations make excellent exploration targets because of their scalability. Like VMS deposits, they are often found in clusters, something that is attractive to major gold companies looking for new deposits that can be developed into mines with longevity.

Canadian mines with banded iron formations include Detour Lake, Madsen-Red Lake, Pickle Crow, Musselwhite and Dona Lake in Ontario, and the closed Lupin mine in Nunavut which produced about 3 million ounces of gold.

Perhaps the best example of a gold-bearing banded iron deposit is the shuttered Homestake Mine in South Dakota. The +40-million ounce deposit was the largest and deepest gold mine in North America before it closed in 2002.

The Marudi property has similar stratigraphy (rock layers) and mineralization to the Homestake, Lupin and Musselwhite mines.

Gold-hosted banded iron deposits are remarkable not only for their longevity, but the number of “pods” that they often contain. As one pod is mined out, others are usually found. That’s because, like VMS deposits, gold-hosted banded iron deposits often occur in clusters. Guyana Goldstrike wants to find out what other deposits might be hidden among Marudi and what potential other properties in that area may yield to the east and west.

Also, worth noting is what has been revealed through the airborne geophysical survey. Drilling at Mazoa Hill for example has only gone as deep as 250 meters. The survey shows magnetic signatures three to four times that depth, indicating the possibility of an underground mine. But Guyana Goldstrike won’t explore at depth just yet; it’s focused on trying to build one, two, even up to eight pits – like the Rosabel gold mine in Suriname – jointly owned by the Iamgold and the Suriname government.

For now, though, GYA is taking it one step at a time. A 2,000-meter drill program is planned for later this year. The 10 to 12-hole program, which still has to be fine-tuned, will build on the mineralization found in trenches to date. The drill holes will target the anomalies identified in the magnetic survey. 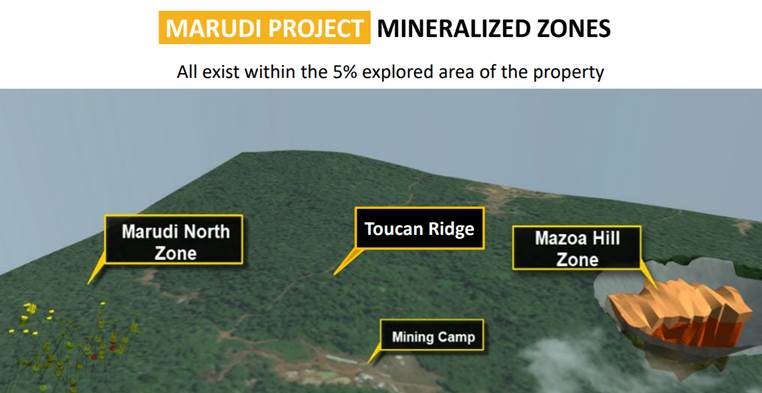 The end game is to find a million ounces or more – enough to interest a gold major in a buyout.