When it comes to gold mining jurisdictions in Canada, the Abitibi Greenstone Belt that spans across the Ontario-Quebec border has to be the first place that comes to mind, having hosted more than 100 mining operations since the turn of the 20th Century and now home to the Canadian Malartic mine — the largest in the country in terms of production.

Within the Quebec portion of the Abitibi belt lies the Detour gold trend, running east of the other major gold mine in the region: Detour Lake.

Along this gold trend, the search for “earth shattering” gold discoveries is now heating up, serving as the foundation of what could become Canada’s next major gold camp: Fenelon.

Another key player in the region is Great Thunder Gold Corp. (CSE:GTG, OTC:GTGFF, FSE:M4KQ-FF), which has been quietly snapping up properties surrounding Wallbridge’s operation. The company recently completed an airborne geophysics survey on its Northbound, Northbound Extension (together referred to as the Northbound project) and Southern Star properties in the Fenelon gold camp, and after more than two months of anticipation, first interpretation of results have been received.

This survey consummates the first part of Great Thunder’s 2020 exploration program, which it kicked off earlier in June beginning with the Northbound project, situated on trend with Wallbridge’s flagship Fenelon gold deposit and its new Reaper discovery.

The Southern Star project was officially acquired and added to the mix two weeks later, expanding Great Thunder’s total footprint in the Fenelon camp by nearly fivefold to 10,677 hectares.

This new property is also conveniently located 6.5 km south of Wallbridge’s Fenelon/Tabasco deposit. A historical intercept along the Bapst Fault yielded 5.6 g/t Ag over 1.4 m and 5 g/t over 1 m, part of an area of anomalies identified by Midland Exploration Inc. (TSX.V:MD).

The company now has properties sandwiching the Wallbridge project from the north and south (see map below) along the highly prospective Detour Gold Trend within the famous Abitibi Greenstone Belt. 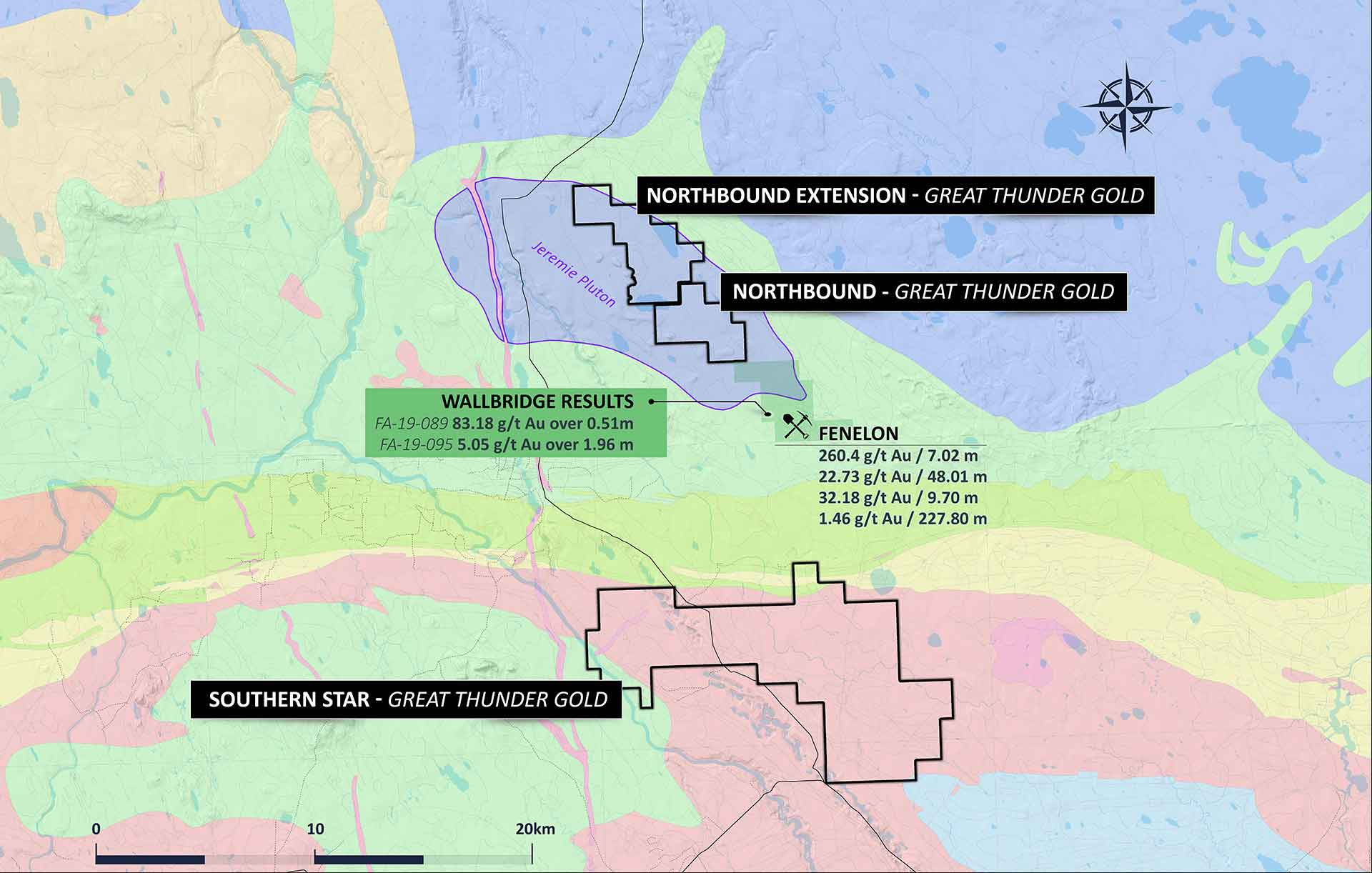 Deemed Canada’s next major gold producing region, there has been an increasing number of activity in the Fenelon camp since Kirkland Lake Gold Ltd. (TSX, NYSE: KL) (ASX: KLA) made its move to acquire Detour Gold Corp.

The key asset in the deal was the Detour Lake mine in the Abitibi region that managed to produce 601,566 ounces last year, which would place it among the top producers in the world. There is already as much as $50 million committed to drilling and exploration on the Detour Lake property for the first two years.

This major acquisition provided further business opportunities and kickstarted a chain of events, led by Wallbridge snatching Balmoral Resources’ assets through a merger and Great Thunder also making its presence felt with property acquisitions and expansions.

Wallbridge already has a 70,000 to 80,000 m drilling program planned in the region this year despite Covid-19 slowdowns, with the aim of completing a NI 43-101 maiden resource estimate next year that could exceed one million ounces (in the indicated category).

Great Thunder is aiming to follow the footsteps of Wallbridge by exploring surrounding properties that have had little to no past work.

The latest airborne survey so far has validated the company’s confidence in the area. With the help from North Vancouver’s Campbell and Walker Geophysics, it has successfully identified structures of interest within the Jeremie Pluton contact, considered the most promising area of the Northbound property, as well as five conductive zones on the Southern Star Property.

At the beginning of Great Thunder’s summer exploration, a 569 line-kilometre heliborne magnetic survey was carried out at 50m line spacings over the Northbound property.

This 1,162-hectare property encompasses the Jeremie Pluton contact, within which Wallbridge had previously intersected high-grade results such as 22.73 g/t Au over 48.01 m near the contact with surrounding volcanics. 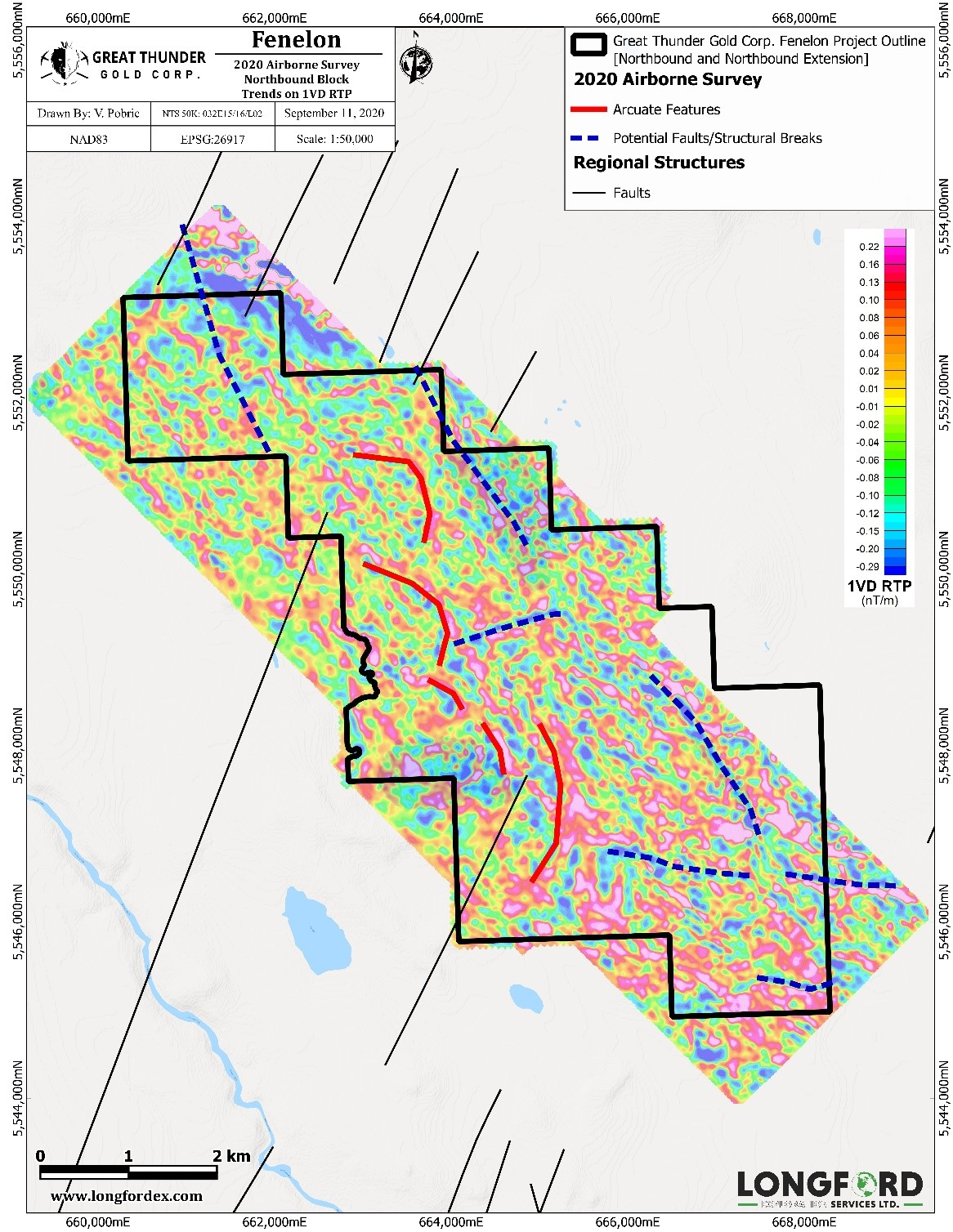 After a first look at the survey results, the company deemed the Northbound magnetic survey to be successful in identifying several arcuate features suggestive of zoning with the pluton, as well as potential faults and structural breaks worthy of follow-up exploration.

To the south of Wallbridge’s project, 1,359 line-kilometres of helicopter magnetics and time domain electro-magnetic (EM) survey was completed at the Southern Star property at 100m line spacings.

Again, the survey was successful in identifying a large number of breaks and offsets and helped to better define lithological contacts within the greenstone package. The EM survey highlighted a total of five conductive zones in the north and west of the property, especially to the north (closer to Fenelon), where four conductors appear to be associated with the flanks of a mafic volcanic unit, in contact with intermediate tuffs and graphitic horizons (see figures below). In the west, a conductor is associated with graphitic schists along the Bapst Fault. 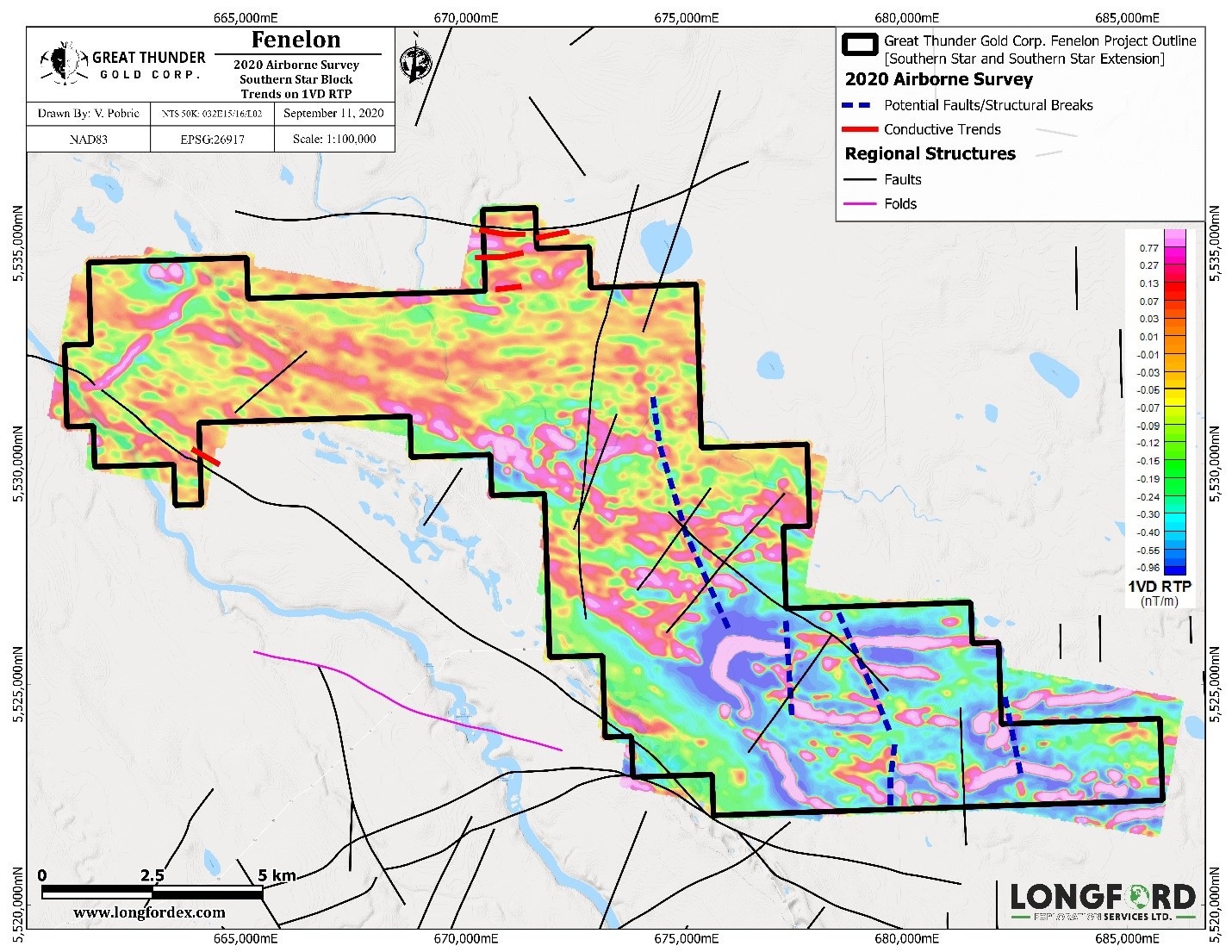 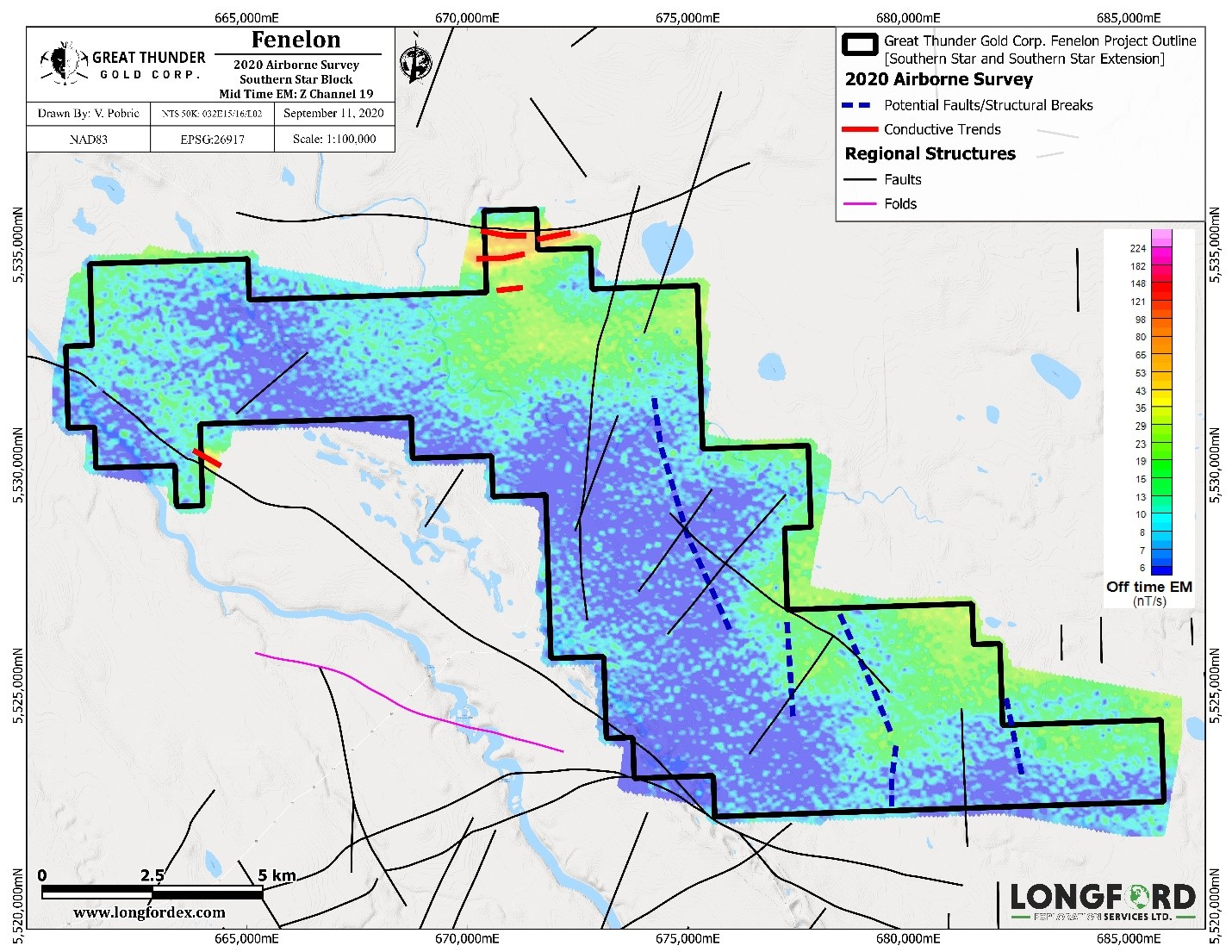 A limited amount of past work had taken place along these conductors, and they will be incorporated into further 3D conductive plate modelling in order to generate drill targets ahead of a winter drill program.

As such, Great Thunder will have further exploration on the horizon and has accordingly retained the services of Longford Exploration Services Ltd., which has a vast amount of experience in grassroots exploration and diamond drilling campaigns in the region.

An upcoming program is currently being designed to consist of till sampling in the coming weeks and drilling on high priority targets after freeze-up. Permitting for these programs is underway, setting up the company for more exploration success later on.

Meanwhile, not only is Great Thunder occupied with exploring the Fenelon camp, the company is also making moves to gain further exposure and “capitalize” on an ideal market environment.

Following its first geophysics analysis, the firm subsequently applied for trading on the OTCQB Venture Market in the US, as well as changing its OTC ticker symbol from MLBVF to GTGFF to better align with the company name.

Great Thunder is also working to achieve Depository Trust Company eligibility to further facilitate trading of its shares in the US.

The new listing would allow the company to obtain certain exemptions and expand its investor base, especially under an environment where more and more investors are looking at opportunities in precious metals given gold’s historic run this year.

In the Canadian market, Great Thunder and its optimal location in an emerging gold camp had certainly been noticed by some of the biggest mining investors including Eric Sprott, who upped his stake in the company to over 15% on top of his existing investment in Wallbridge.

Since expanding its footprint in late June, the company’s stock has nearly doubled, including a single-day gain of 14.8% on news of an upsized private placement that Sprott participated in.

Now that its projects’ potential has been confirmed with multiple areas that should see exploration in the future, Great Thunder’s gold mining story in the Abitibi region has only just begun.

Richard does not own shares of Great Thunder Gold (CSE:GTG). GTG is a paid advertiser on Richards site aheadoftheherd.com