As comedian Rodney Dangerfield used to say, “I don’t get no respect”. The same might be said of the gold market.

Gold is often criticized by Wall Street as kind of a useless investment.

But gold performs two jobs that fiat currencies, or any other financial innovation, cannot do; first, it acts as a safe haven in times of turmoil, second, as a store of value.

Nowadays the only people and institutions who own physical gold are central banks and those who distrust the monetary system – people who see gold as a hedge against inflation, and/or want to own it as insurance against some calamity (eg. banking system collapse), when getting access to cash is difficult or impossible, and paper currencies plummet in value.

Most people think such an event is so unlikely, they disregard the idea of owning gold or returning to the “barbarous relic”, as economist John Maynard Keynes referred to the gold standard in his 1924 book on monetary reform, suggesting gold had outlived its usefulness.

In reality there are many instances of how gold came to the rescue of states on the verge of collapse, and a number of frankly terrifying scenarios that could destroy the meaning and value of today’s money in a heartbeat.

Historical examples include the fall of Saigon in the 1970s, when safe passage on a departing ship was paid for with 10 to 12 “taels” (1 tael=1.2 troy ounces) of 24-karat gold for an adult and half that for a child; Argentina, where the precious metal is turned to during economic crises, such as in 1989 when prices rose by 5,000%!; Venezuela, whose collapsing currency, the bolivar, recently led to hyperinflation, shortages and social unrest, and where gold is used to buy food and everyday goods; and Zimbabwe. The poster child for hyperinflation reached peak madness in January 2009 when a 100-trillion-dollar note was printed – the largest currency denomination ever issued. People’s savings were completely wiped out, leading to food shortages and famine. Many were forced into illegal gold panning just to scrape together enough gold to barter for food. Cooking oil, soap and grain, all were exchanged for gold. “Without 0.3 grams of gold a day you would not survive. Without gold you would have died,” recounts a resident who fled Zimbabwe in 2008, quoted in Bullion Star.

As for current situations that call for a flight to gold, there are both natural and man-made examples. Natural disasters include major earthquakes/ tsunamis, wildfires, asteroid strikes, solar storms, and storm surges that knock out electricity grids, all made worse and more frequent by climate change. Man-made apocalyptic events include financial crises, wars and pandemics. The economic fallout from covid-19 is largely responsible for gold prices gaining 16% so far this year.

Gold is also thought of as a store of value. The precious metal is proven to have held its worth over time. Investors therefore see it as a way to preserve wealth, unlike paper or “fiat” currencies which are subject to inflationary pressures and over the years, lose their value.

Gold gives all of us something that fiat money or any other financial innovation, cannot deliver. Gold is insurance, sprout-less yes, but irreplaceable in its functions.

At AOTH, we’ve been closely following gold’s dramatic ascent closely since it started climbing in early 2019. Long hated by Wall Street, finally it appears some portfolio managers are seeing the benefits of owning gold and are recommending it to their clients. Even mainstream media is catching on.

On Friday I spotted a headline in the Financial Post that shouted ‘This gold rally has been nothing short of historic and investors and analysts are betting it’s far from over’.

The article cites Bank of America raising its 18-month target price to US$3,000 an ounce, due to dovish central bank policies; Goldman Sachs predicting that gold will reach $2,000 by the end of the year, based on similar concerns about currency debasement; and David MacNicol, president and portfolio manager of MacNicol and Associates Asset Management Inc., who sees the price of gold hitting $2,500 by the end of 2021.

“People are finally starting to clue in now,” MacNicol told the FP. “If you lined up all of the world’s currencies … which would you rather have? The U.S. dollar or gold? I personally think gold is the currency of choice.”

Also of interest, is where MacNicol is directing would-be gold investors.

Normally fund managers point them towards the large-cap gold miners in search of a return, plus maybe a dividend. Not this time.

He has looked to small- and mid-cap stocks for returns, since large-cap gold miners such as Barrick Gold Corp. and Newmont Corp. have been rangebound since recovering in April.

The article says MacNicol, who mostly manages retirement portfolios, is choosing gold to replace the returns he isn’t getting from swing moves in volatile tech stocks. Gold offers slower but steadier gains.

A historical chart comparing gold prices to US stocks has gold outperforming the S&P and the Nasdaq in all but the gold bear market years of the late 1990s, early 2000s. 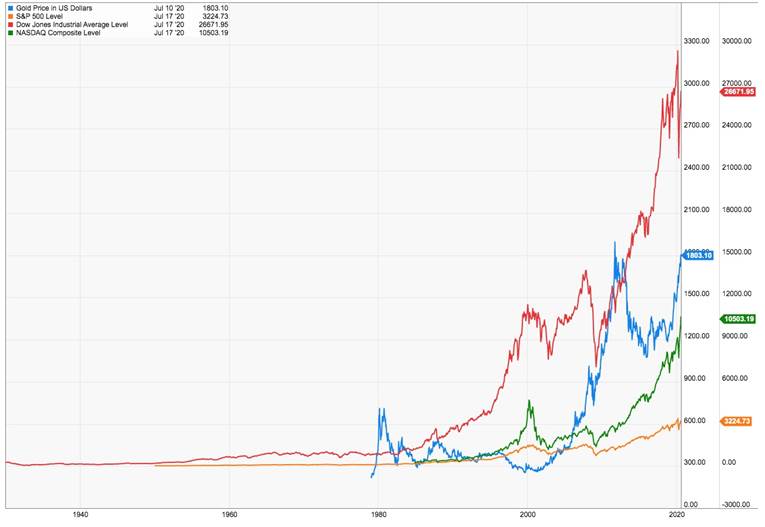 If gold is disrespected by Wall Street, silver is ignored. The “poor man’s gold” is a small market, much smaller than gold, and often dismissed as being manipulated by the big banks. In 2014 a US federal court ruled that a class-action lawsuit by silver investors failed to show that JP Morgan Chase & Co. violated federal antitrust and commodities laws by distorting silver prices. However two years later, Germany’s Deutsche Bank was ordered to pay $38 million for silver price manipulation.

A historical silver chart shows the white metal peaking in 2011, when it approached $50 an ounce, falling steadily until 2016, then bumping along between about $15 and $18 an ounce, until present.

In March 2020, silver plunged to a 10-year low as the world was panicked by the onset of the coronavirus pandemic. However, in May it jumped more than 19% on expectations of a swift economic recovery, ie., an increase in demand for its many industrial applications, including solar panel and 5G networks. From March 18 to June 1 the white metal ran 52%, erasing all of its losses during the dark days of the pandemic in March and April.

Lately silver is seeing a lot more investor interest. However it’s not physical silver that is attracting all the attention, but silver ETFs. Silver ETF holdings in June sat at 746 million ounces, the highest on record according to Bloomberg data.

By far the largest is iShares Silver Trust (SLV). SLV owns nearly half of all the silver controlled by the world’s silver funds.

In his latest column, Adam Hamiltion of Zeal Intelligence observes that SLV’s daily holdings can be used as a proxy for silver investment demand. And that demand is rocking.

Following are his key points:

The last point calls for some explanation. The gold-silver ratio is the amount of silver one can buy with an ounce of gold. Simply divide the current gold price by the price of silver.

On June 12, 2019, the gold-silver ratio hit a 26-year high by breaking through the 90-ounce mark – meaning it took over 90 ounces of silver to purchase one ounce of gold. The higher the number, the more undervalued is silver or, to put it another way, the farther gold is pulling away from silver, valued in dollars per ounce.

The current gold-silver ratio, 93:1, is way higher than the historical ratio of 55 ounces of silver to one ounce of gold, meaning that silver is highly undervalued compared to gold. It means an investor with an ounce of gold could sell his gold for 93 ounces of silver.

It’s fun to speculate on silver prices, given that gold, as mentioned, is expected to move higher, up to $3,000 an ounce according to Bank of America and one portfolio manager quoted in the Financial Post article.

Gold is clearly in the limelight right now. Having gained 16% year to date, amid stock market turbulence, and all kinds of uncertainty over traditional asset classes, gold is presented as a relatively stable growth instrument.

We love gold, and especially undervalued gold juniors, which offer fantastic leverage against a rising gold price, but we mustn’t ignore silver. The white metal is seeing huge inflows into ETFs, particularly SLV, which is a good proxy for silver investment demand. Institutional investors, not retail, are leading the charge.

Silver has risen 7% so far in 2020, and it stands to gain a lot more, considering the current ratio has silver far undervalued compared to its gold sister – it could correct up to $50 an ounce if gold goes to $3,000/oz.

Consider too that silver has an industrial demand component – 60% of silver’s uses are industrial. Strong demand for solar panels and 5G, combined with steady inflows to silver-backed ETFs for investment purposes, due to a slow recovery from the coronavirus in the United States, are bound to drive silver prices higher over the next few months.