In November 2019, New Found Gold Corp (TSX:NFG) announced one of the highest-grade, most significant gold intercepts ever drilled in the Canadian province of Newfoundland. Hole 19-01 was reported with a 19-meter intercept of 92.86 grams per tonne gold.

The discovery lies within NFG’s Queensway project in the Central Newfoundland Gold Belt. The discovery and the wave of news that is sure to follow has sparked a staking rush, a flood of financing to a host of other Newfoundland explorers, and a bonanza of exploration programs kicking off across the province’s mineral belts.

One of these is Global Vanadium (TSX-V:GLV), with their recently acquired Stony Lake property, which lies southwest of Sokoman’s Moosehead project, and northeast of Marathon Gold’s Valentine Lake deposit – all on the Valentine Lake Trend.

The company just announced a $2.5 million raise to fund the acquisition and exploration on the property. The super-tight share structure, 18 million shares, saw the stock rocket from $0.11 to $0.90 but is still only a $17 million market cap. The project is early stage but is known to have numerous anomalous to high-grade gold showings. 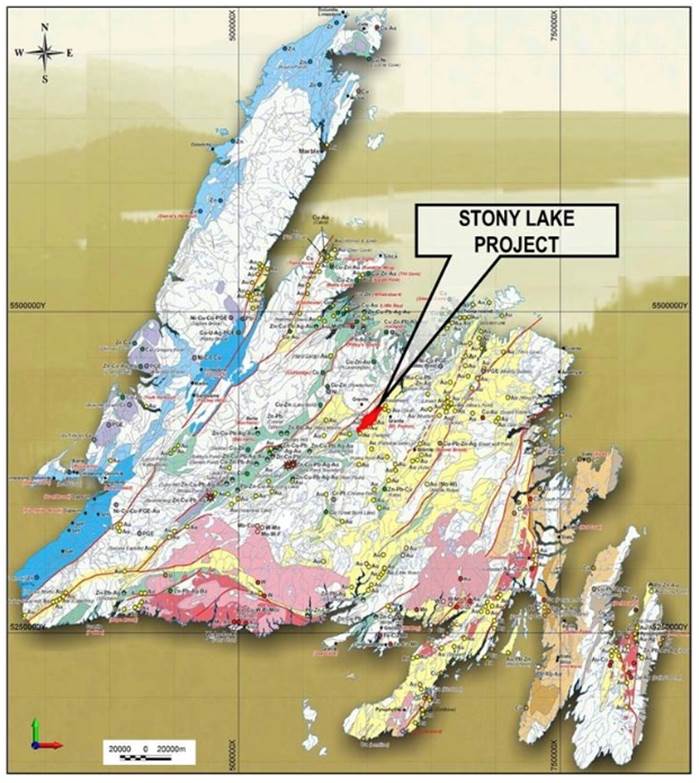 Area plays, where one exploration company makes a discovery, then others rush in to stake ground all around them, are at the very foundation of junior resource markets.

This is mainly due to the mining industry slogan, “the best place to find a mine is in view of an old mine.” Because mineral deposits tend to form in clusters, when a new discovery is made, the odds of finding similar deposition on neighboring properties improves significantly.

Companies that are on trend of the discovery, or even just within the same mining camp, suddenly find themselves with access to capital, as big funders move in to take advantage of the regional gold rush.

As work programs begin, one stock after another begins to rise, often doubling or tripling in value in anticipation of results. Positive assay results bid prices up even higher.

The stir that New Found Gold’s Queensway project intercept has made in the market, has helped revive the entire Newfoundland mining and exploration industry. The province is host to numerous world-class deposits, not the least of which is Marathon Gold’s (TSX:MOZ) Valentine Lake deposit which released a new resource estimate as part of their prefeasibility study on April 4, 2020 demonstrating 4 million ounces at 1.77 g/t gold in 4 different zones of measured, indicated and inferred categories.

MOZ trades at $2.50 per share and has 205 million shares outstanding. They recently announced a 45,000m drill program to expand their resources and closed a $34 million bought deal financing to advance their Valentine Lake property towards feasibility.

And we can’t forget the company that started it all, Sokoman Minerals (TSX-V:SIC). In 2017 Sokoman hit 11.9m of 44.9 g/t gold, prompting a number of juniors to stake claims and acquire ground in the Moosehead Gold District. The company this year continues to drill impressive intercepts at its flagship Moosehead project, including 4.7m of 18.6 g/t Au.

So, if New Found Gold and Marathon Gold are the main dishes at the banquet, there are numerous side dishes being prepared that appear to be just as tasty. With little doubt that Newfoundland can deliver world-class deposits from its remarkable structural setting, junior explorers are having no problem funding property acquisitions and staking binges.

Geologically, the rocks at Stony Lake are described as widespread low-grade (0.5 to 4.0 g/t Au) mineralized pyritic sandstone, quartz veins and quartz stockwork, exposed in the Silurian-age Botwood Group sediments; and a high-grade gold environment, similar to Sokoman’s Moosehead and New Found Gold’s Queensway, in the the basement rocks below the Botwood sediments.

According to Global Vanadium’s project page,

The 2019 airborne survey and subsequent interpretation clearly show that the structural trend of Sokoman’s Moosehead discovery crosses onto the Stony Lake East property. This appears to be a primary basement structure, with multiple splays off it. This defines a high-priority exploration target in the basement below the Botwood Group.

In addition, the interpretations indicate that concentration of zones of gold mineralization discovered in the Botwood sediments in 2019 is along a NNE structural trend in the Botwood. Although this is a different, parallel, trend to that discussed above, the model is the same, ie. a major structure with gold-bearing fluids emanating from a basement structure depositing low-grade mineralization in the Botwood. 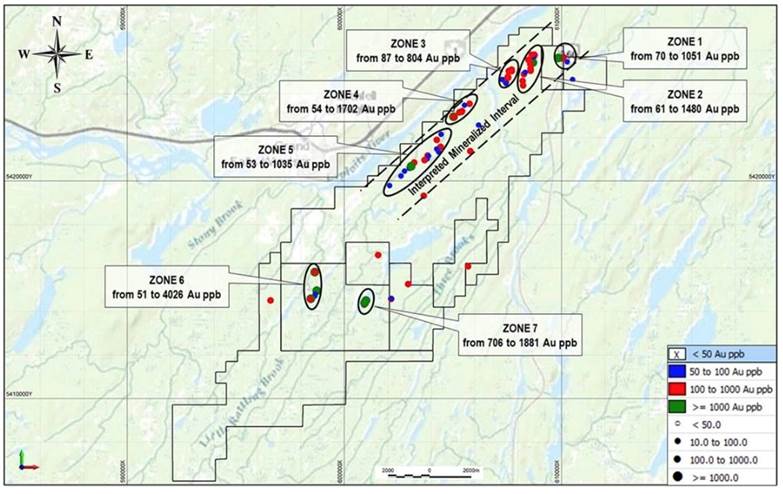 That’s important. Because junior mining, like real estate, is all about location.

Area plays are the stuff of dreams, as far as resource investors are concerned. The odds of a gold junior hitting a discovery hole, building a resource and getting bought out by a major gold miner are slim. But if the company’s project(s) happen to be surrounded by well-mineralized neighbors, their chance of success goes up dramatically.

Area plays are ignited by first movers. Once a discovery has been made, any explorer working in the right area code hits the radar screens of institutional investors. Lenders willing to take a shot on a quick return on investment provide them with capital for drilling.

Cashed up, work programs are initiated, as retail investors hold their collective breath for results.

This is exactly what we see happening in Newfoundland’s Valentine Lake Trend, where New Found Gold, Sokoman Minerals and Marathon Gold, have all found joy at the drill bit.

Global Vanadium’s Stony Lake is in the right neighborhood. As the map above shows, the property is bang-on the same trend as Sokoman’s Moosehead and Marathon’s Valentine Lake. The red dots couldn’t be better lined up.

“Close-ology” is often invoked as a reason for investing in a junior exploration company, especially if it’s in an area play. But we need more than proximity to other deposits. We need companies that can raise money and can generate news flow of their own.

In early August Global Vanadium (soon to be called something else) announced a private placement, for up to $2.5M). Funding box, checked. GLV has a tight share structure, thereby checking another box, and the market is loving it. In July the company was trading for 11.5 cents a share, on Tuesday it hit $0.90.

It’s early stage, but Stony Lake is getting ‘boots on the ground’ very soon, will have a lot of news flow of its own and is situated in a mineralized district that is all but guaranteed to deliver steady news flow for years. There is no doubt in my mind that with all the money that is being spent, there will be discoveries. Global Vanadium, in my opinion, is in a great position to benefit from not only its own news but from all the news coming from one of Canada’s premier area plays.

Richard does not own shares of Global Vanadium (TSX.V:GLV). GLV is a paid advertiser on his site aheadoftheherd.com