Getchell Gold (CSE:GTCH), in our opinion, just became a contender to become a top junior gold exploration player in Nevada.

The Toronto-based company announced on October 17, 2019 a binding letter agreement with Canarc Resource Corp. (TSX:CCM) to acquire two Nevada properties: Fondaway Canyon and Dixie Comstock. Both have historical resource estimates – which immediately puts GTCH head and shoulders above many of the juniors out there trying to build a resource. It’s already got two.

But Fondaway Canyon, with its 1.1 million ozs of high grade gold,  which begins near surface and is open at depth and along strike, coupled with upside exploration potential is a game changer for Getchell.

Metal price for the Mineral Resource estimates was $1,225 per ounce Au, the trailing three year average on December 31, 2016. The minimum reporting cut-off was 0.10 opt Au (3.43 g/t), over a minimum horizontal width of 6 ft (1.8m). Mineral Resources which are not Mineral Reserves do not have demonstrated economic viability.

According to Getchell’s news release, “The Fondaway Canyon mineralization is contained in a series of 12 steeply dipping en-echelon quartz- sulphide shears outcropping at surface and extending laterally over 1200 m, with drill proven depth extensions to > 400 m.” 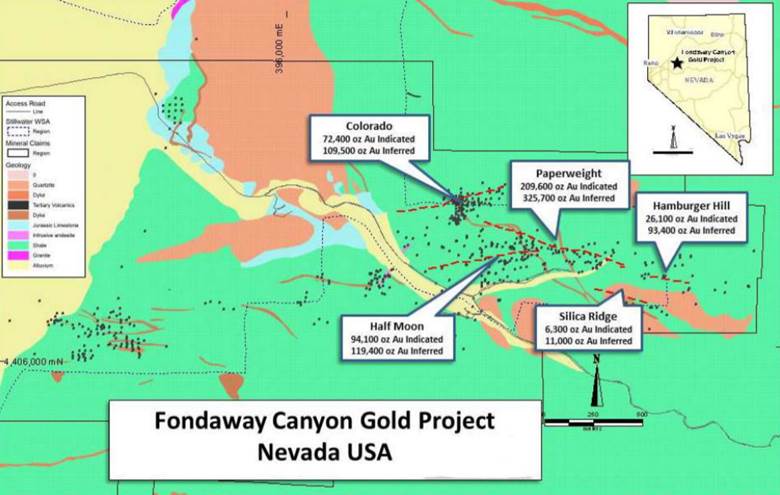 The property’s database contains the records of 591 holes totaling just over 49,000 meters of drilling.

“The broad zones of mineralization intersected in the drilling program extend mineralized zones to depth and along strike and, together with previous exploration results, define bulk tonnage mineralization that may be amenable to open pit mining. Previous efforts in the district focused on the underground mining potential of the district by exploring narrow high-grade zones”
states Canarc’s December, 2017 news release.

The potential for expansion as the resource appears to be open along strike, and at depth, and has expansion potential along a one-mile corridor to the South Mouth Zone which was previously surface-mined according to the Technical Report. Detailed rock and soil geochemistry completed in this area need to be followed up on.

According to the Technical Report; 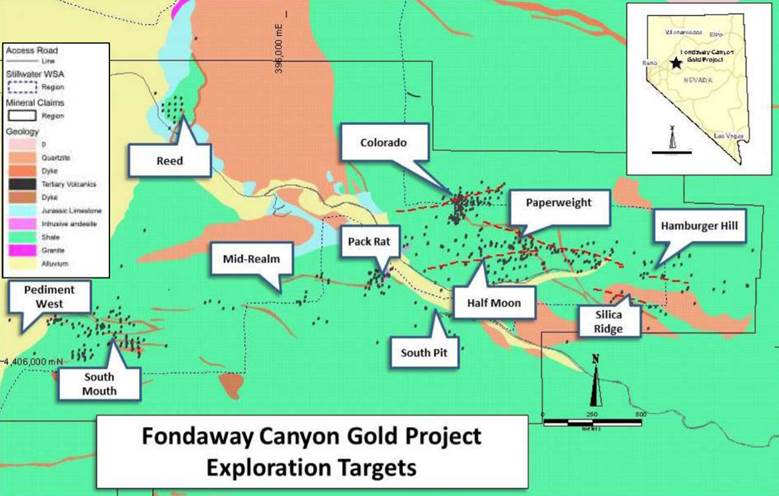 2002 NCI drilling intercepted mineralized zones with two holes drilled in the pediment west of the South Mouth pit. These results should be followed up with additional drilling to determine if a bulk tonnage, disseminated gold deposit exists in that area, or if there are potentially offset extensions of the Fondaway Canyon vein systems associated with mineralization at the South Mouth pit.

The deal that Getchell Gold cut with Canarc for Fondaway Canyon offers excellent value for GTCH shareholders. For US$2 million in cash and US$2 million in shares, Getchell Gold gets the option to acquire a 1.1-million-ounce resource for US$4 per ounce of gold in the ground, compared with a median acquisition cost of $39/oz, based on 253 acquisition transactions over a 13-year period. 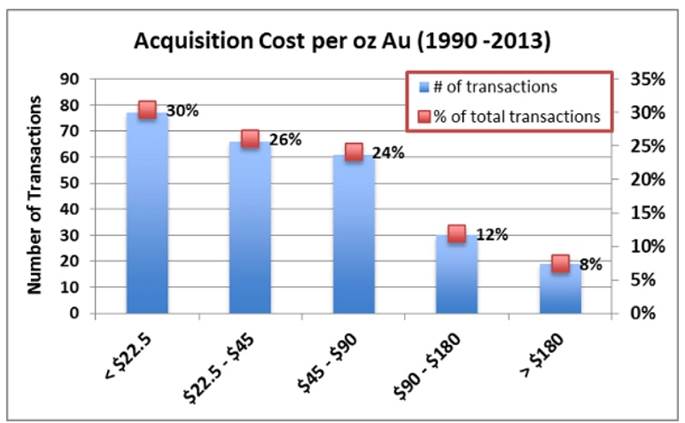 In my opinion the close to surface high-grade nature of Fondaway Canyon’s resource, plus the starting ratio of indicated to inferred, may attract a market premium. It’s also reasonable to believe that GTCH would have an easier time converting inferred resources to indicated, and indicated to measured, with a 6 g/t deposit compared to say the 1.06 g/t Au 2012 average grade of producing gold mines.

AOTH cautions readers that Getchell Gold still needs to do normal due diligence, as any company would have to do – ie. geology, tenure and metallurgy – when acquiring a property. I expect the deal with Canarc to close in December, however it might bleed over into January 2020 because of holidays.

Nevada currently produces roughly 75% of all the gold mined in the United States. According to the US Geological Survey if it were a country, the state would be among the world’s top four gold producers.

But it’s not just production that should put Nevada on the radar screens of every precious metal’s investor.

In the Fraser Institute’s latest (2018) survey, Nevada was ranked number 1, as the most attractive jurisdiction for mining investment.

When Barrick Gold went looking for areas thought to be prospective for adding ounces to replenish its dwindling reserves, it went straight to Nevada.

In July Newmont and Barrick established a new joint venture partnership, Nevada Gold Mines LLC, 61.5% owned and operated by Barrick, and 38.5% belonging to the newly merged Newmont Goldcorp. The JV makes Nevada Gold Mines the largest producing gold complex on Earth. Its northeastern Nevada assets include 10 underground and 12 open-pit mines, plus autoclave, roasting and heap leach facilities that in 2018 produced 4.1 million gold ounces – double that of the next largest gold mine, Muruntau in Uzbekistan.

The creation of Nevada Gold Mines has piqued the interest of other companies looking to discover and develop new ounces in the golden state.

Some are jumping in with both feet. Take AngloGold Ashanti as an example. The South African gold company plans to drill the Silicon project it optioned from RenGold in 2017, located in the Bare Mountain mining district. Its CEO, Kevin Dushnisky, described Silicon as “a very interesting deposit” during a Bloomberg interview, and “the base of Anglo’s increasing presence in North America.”

Dushnisky added that Anglo is open to joint venture partnerships, including with the two main players in Nevada, Barrick and Newmont.

“Since I’ve taken the role at AngloAshanti I’ve had a lot of inbounds [calls from industry peers] to discuss that particular asset so there will be a lot of interest at the right point in time,” he told the Bloomberg interviewer.

This past August, Anglo stepped up with a $1.3 million private placement for Nevada-focused junior Corvus Gold. The company with 21 operations on four continents didn’t mind paying a $2.60/share premium for Corvus to put towards its Motherlode and North Bullfrog properties.

Coeur Mining has also stepped into Nevada through the acquisition of Northern Empire Resources and its Sterling project. The United States’ largest silver producer had encouraging drill results from areas near the past-producing Sterling mine and Daisy zone, including 21 meters at 6.1 grams per tonne gold.

A third major gold miner, Kinross, has a large land package on the western edge of AngloGold Ashanti’s Rhyolite project from which it plans to drill epithermal targets. The Toronto-based firm made a huge investment in Nevada in 2015, when it acquired the Bald Mountain and Round Mountain mines from Barrick, for a substantial $610 million in cash.

Getchell Gold’s Indicated and inferred resource, at a 3.43g/t cut-off:

Getchells cut-off grade, the highest I’ve ever seen in Nevada (US$1,250.00 oz Au was used), is higher than Nevada Gold Mines resource base grades.

The gold industry is consolidating. Pretty soon, in my estimation, every gold miner’s survival instinct is going to force them to start evaluating buying juniors to bulk up on their resources. Nevada is one of the best places in the world to hunt for gold and in my opinion Getchell Gold (CSE:GTCH) could be a target.

Getchell bought 1.1m ozs of gold in the ground from Canarc for US$4 an ounce. I can buy an ounce of gold from my bullion dealer for US@1,512.70. Or, I can buy some of Getchell’s cheap four dollar an oz gold potential. Hmmmmmm.