From Mine To Battery

Four minerals – chromium, cobalt, manganese and the platinum group metals (PGM) – are referred to as the “first tier” or “big four” strategic materials because the US is over 50% import reliant on each, because of their widespread industrial roles, and because of their vulnerability to supply disruptions. All of these minerals are essential to any developed countries domestic security and its national economy.

The big four are often referred to as the metallurgical Achilles’ Heel of the United States because their role in the U.S. economy is so pervasive and they are so vulnerable to supply interruption.

Aside from iron manganese is the most essential mineral in the production of steel. Both Canada and the United States have numerous and vast iron ore deposits, yet neither country produces manganese. You can’t produce steel without adding 10 to 20 lbs. of Electrolytic Manganese Metal (EMM) per ton of iron.

According to the United Stated Geological Society (USGS) the U.S. is 100% dependent on imported supplies of manganese. Manganese has no substitute in its many steel applications and has itself become a substitute for other more expensive metals in certain alloys.

The same circuits that make EMM make electrolytic manganese dioxide (EMD). EMD is a key ingredient in the production of lithium-ion, lithiated-ion, alkaline and new battery technology – a zinc zinc/manganese battery is likely to become the replacement for the not so environmentally friendly lead/acid automotive starting and lighting market batteries. This battery market is still, by far, the largest in the world and is not going to disappear.

Since there are no mines producing manganese ore in the U.S. or Canada there are no domestic suppliers of EMM in North America.

The U.S. is the largest consumer of EMD worldwide. China controls 97% of the world trade in EMM.

Everyone knows that alakaline batteries (the ‘always one short for the remote’ double AA’s and triple AAA’s) have long been made out of zinc/manganese. Many are now starting to realize just how important manganese is to the electric vehicle and the burgeoning energy storage market in general.

That’s because one of the most successful Lithium-ion battery systems is a cathode combination of nickel, manganese and cobalt (NMC).

The cathode combination ratio of a NMC battery is usually one-third nickel, one-third manganese and one-third cobalt, meaning that the raw material cost is lower than for other options (cobalt, having just hit US$25.00 lb is on its way to pricing itself into oblivion as far as battery costs are concerned). 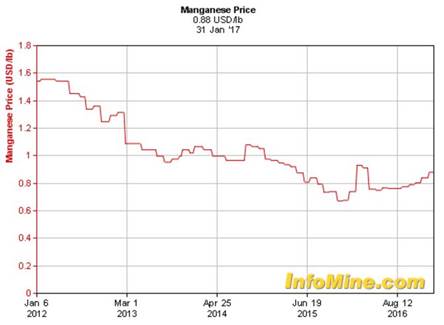 Three main historic manganese carbonate zones plus at least two additional showings identified in historic exploration are located on MN’s Battery Hill property (these are all historical figures and are not 43-101 compliant):

These three zones have a range of grades from 7.5% to 10% Mn carbonate with an overall estimated average grade of 9% Mn carbonate.

Manganese X is moving quickly. On Dec. 21, the company announced that it completed its initial diamond drill program. The drilling program consisted of 16 holes totaling 3,589 meters, and was completed as an initial test of three primary areas on the property, the Iron Ore Hill, Sharpe Farm and Moody Hill manganese carbonate occurrences. The drill targets were based on the results derived from gravity and magnetometer surveys completed in October, 2016.

The initial drill program, consisting of wide spaced drill holes, has confirmed significant widths of near surface manganese mineralization over a strike length of approximately 1.5 km.

Mineralization remains open to depth and along strike.”

A second drill program, for which the company is financed, will be needed to complete a 43-101 compliant resource report (expected in 2017) and preliminary economic assessment (PEA) report. Manganese X Energy is preparing for an exploration and drill program expected to commence in the spring.

The company has started metallurgical studies funded by its $1.45 million oversubscribed financing.

“This innovative metallurgical project is developing a process in order to produce a manganese concentrate to be utilized for production of Electrolytic Manganese Dioxide which is also known as EMD. EMD is a high value manganese product which is utilized within various applications especially for lithium ion battery cathode material for electric vehicles. Manganese is the critical link in the lithium ion storage chain. The reason we refer to it as innovative is that the Company is focused on producing a cost effective, environmentally friendly concentrate for the lithium ion battery market which is currently in high demand within the North American.” Martin Kepman, CEO and Director Manganese X Energy.

On April 4th SmallCap-Investor published an interview they did with Martin Kepman, CEO of Manganese X Energy

On April 6th 2017, the company announced it has entered a non-disclosure and non-circumvention agreement with an arm’s length party to negotiate an acquisition of an additional manganese deposit. The parties intend to finalize a binding letter of intent within the month.

For the last couple of decades energy researchers have focused on capturing power from renewable sources and making our existing electric infrastructure as efficient as possible. Energy storage is the last vital piece, the still missing third link needed to enable widespread adoption of renewable clean energy and electric cars.

According to Tesla CEO Elon Musk, energy storage is the missing link needed to wean the global economy off fossil fuels and enable widespread adoption of renewable clean energy and electric cars.

Widespread adoption of clean renewable energy has been held back because of two major factors: the high cost of solar installations and the lack of economically efficient storage batteries. Solar and wind costs have fallen drastically. Because 52% of battery cost is in raw materials, using manganese can significantly bring down the manufacturing cost of lithium ion batteries – nickel and cobalt are much more expensive then manganese.

We know the United States has long considered manganese a strategic material. We know the U.S. has no production of its own – instead relying on others to supply manganese ore and value added manganese products.

Fact – China controls the electrolytic manganese metal market. With relations between the U.S. and China remaining in the headlines for some time I would expect to hear much more regarding this energy critical metal the U.S. sources almost 100% from China.

We need a long term ‘domestic’ supply chain of manganese – from mine to battery – our supply of EMM and more advanced products such as EMD can no longer be based on the goodwill of China.

And for that reason Manganese X Energy Corp., and it’s Battery hill manganese project, should be on all our radar screens. Is MN on your screen?

If not, it should be.

Richard lives with his family on a 160 acre ranch in northern British Columbia. He invests in the resource and biotechnology/pharmaceutical sectors and is the owner of aheadoftheherd.com.

Richard owns shares of Manganese X Energy Corp. (TSXV: MN, FSE: 9SC2, OTC: SNCGF) and they are an advertiser on his site, aheadoftheherd.com.