One of the largest uranium mining and nuclear energy companies in the world has made a substantial commitment to a uranium explorer operating in the highest-grade uranium district on Earth, Saskatchewan’s Athabasca Basin.

The two companies previously signed an earn-in agreement whereby Orano must spend C$8 million exploring the property over six years, in order to earn up to 70% of the project.

The $2.2 million will be put towards a 2019 exploration program at Preston including nearly 5,000 meters of diamond drilling.

According to Skyharbour CEO Jordan Trimble, “Orano Canada has a very knowledgeable technical team with a long history in the Athabasca Basin, which will help to unlock value at this strategic, district-scale property.”

The Athabasca Basin is famous for its high grades – at over 20 times global averages. Some deposits are over 100x the world average including Cameco’s Cigar Lake which contains an average 17.8% uranium. In comparison the Priargunsky underground uranium mine in Russia has grades of just 0.15%. Or Rio Tinto’s Rossing open-pit mine in Namibia, with grades of 0.03%, compared to over 19% in Denison’s Phoenix deposit – a difference of 630x.

The Athabasca Basin produces about 15% of world uranium supply. Major mines include Cigar Lake, held jointly between Cameco, Orano and Tepco Resources, McArthur River and Rabbit Lake mines, both of which are currently on care and maintenance.

The Basin contains sedimentary rocks with high-grade, often low-tonnage “unconformity” bonanza-type deposits, located at the contact between the Athabasca sandstone and the underlying basement crystalline rock.

Notable discoveries in the Athabasca Basin include:

Orano in the Basin

Orano currently operates 30 exploration projects in northern Saskatchewan and the Athabasca Basin, plus two in Nunavut. It is partnered in 16 joint venture projects in the Basin, including the option agreement with Skyharbour at Preston.

The company says over the last three years it has drilled over 120 kilometers of ground, and has explored more than 765,000 hectares in the Athabasca Basin since 1964.

Orano’s flagship Canadian operation is the McClean Lake uranium mill, which receives uranium ore at an average grade of 18% from Cameco’s Cigar Lake underground mine 80 km away. Cigar Lake is the world’s highest-grade uranium mine.

McClean Lake is majority-owned and run by Orano Canada (70%), with Denison Mines and Uranium Overseas Resources Development (UORD) having 22.5% and 7.5% stakes, respectively. The mill is licensed to produce 24 million pounds of U3O8 a year. According to Orano, 18 million pounds are being used to process all the ore from Cigar Lake, and the remaining 6 million pounds of capacity may be used for new ore from McClean Lake and other nearby uranium deposits. 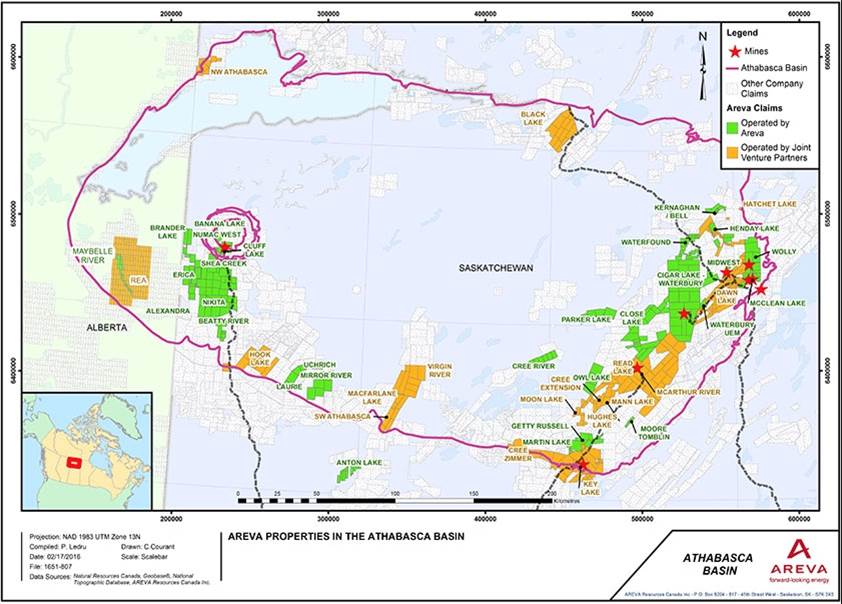 Skyharbour has a 50% interest in the Preston Project – one of the largest land packages (75,965 hectares) in the western side of the Basin – located near Fission Uranium’s Triple R and NexGen Energy’s Arrow deposits, both of which contain high-grade uranium. Under a March 2017 agreement, SYH optioned up to 70% of Preston to Orano. Assuming Orano completes the earn in, the other 30% is divided between Skyharbour and Clean Commodities.

The two agreements in total mean that for $11.5 million in exploration and cash payments plus 4.5 million Azincourt shares, 70% of the Preston and East Preston projects will be optioned off. These two deals are a part of Skyharbour’s prospect generator strategy, whereby the company seeks strategic partners to fund and advance it’s secondary projects while focussing on its main objective of making high-grade discoveries at its flagship Moore Project. 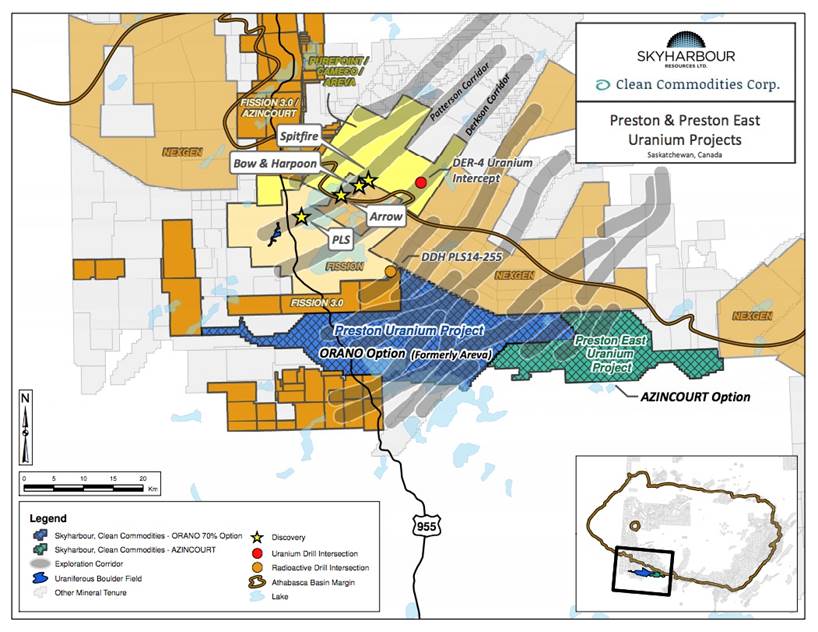 Entering into the second year of its option agreement with Skyharbour and Clean Commodities, Azincourt announced in August a 2018-19 drill program scheduled to begin later in 2018 / early in 2019. The program will involve between 2,000 and 2,500 meters of drilling at East Preston and is designed to test targets identified through a winter geophysical survey earlier this year.

Skyharbour and partner companies had spent about $4.7 million so far exploring the property, which has 15 priority areas and numerous drill targets. Orano completed initial exploration and drilling at Preston in 2017 and 2018, while Azincourt did a ground geophysical program at East Preston earlier this year, to refine drill targets over prospective conductor trends, with drilling planned for early 2019.

As far as the 4,850m drill program announced last week by Orano, Skyharbour says the France-based company will punch 15 to 20 drill holes in early 2019 at Preston. The drilling will test targets defined by an electromagnetic (EM) survey done this year on the JL and FSA targets. A planned EM survey in the Canoe Lake area may also identify targets that could be drill-tested.

JL has not yet been drilled but field work done by Orano last year found several outcrops composed mostly of felsic to intermediate gneiss, with minor granite and pegamite. Click here for more about rocks that host uranium mineralization.

Twenty-one drill targets have been identified, including 8 basement conductors that are considered to be viable drill targets. Uranium explorers in the Athabasca Basin recently have found very high-grade uranium associated with structures and conductors in the basement crystalline rock including NexGen, Fission and Denison.

The FSA target has seen some historical drilling, in the western portion, where a follow-up to a lost drill hole encountered a graphite and pyrite-bearing shear at 179m depth. The core returned 1.8 parts per million (ppm) uranium over 1.0m, at 188m. Last year Oranodetected a uranium anomaly in an outcrop. Two grab samples returned 47 ppm and 62 ppm uranium. Six drill targets have been identified. 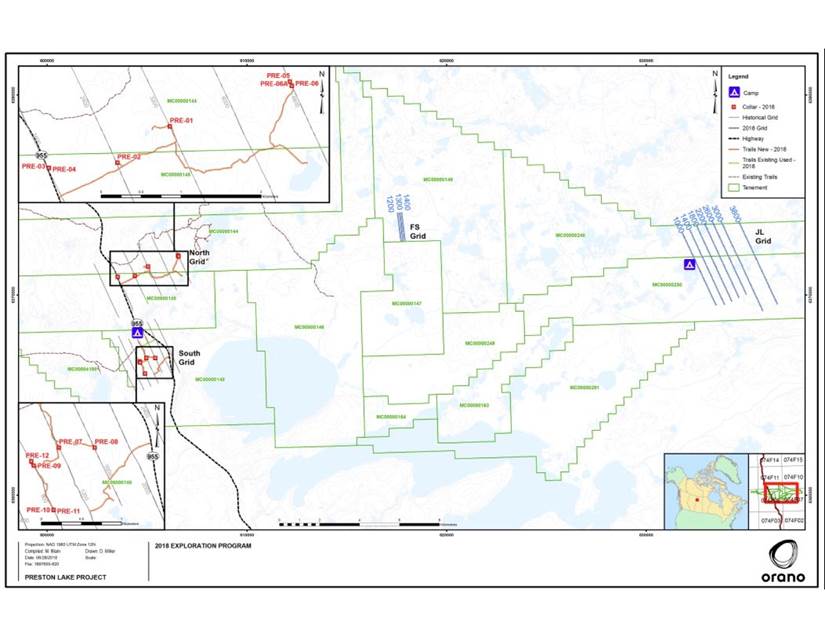 Skyharbour’s summer/fall drill program at its flagship Moore property is aimed at testing new basement targets at the Maverick corridor.

This year a drone survey was conducted along the corridor, flown at close 20m spacings at 35m elevation. This enabled Skyharbour to better define high-priority targets. As a result, the current 3,000m program is taking a different tack, drill-testing the Maverick corridor primarily below the unconformity in the relatively untested basement rocks.

Skyharbour’s earn-in agreement with Denison Mines on the Moore property required SYH to pay half a million in cash and issues shares within five years, and also spend $3.5 million in exploration expenditures. Skyharbour completed the earn-in nearly three years ahead of schedule, meaning it now owns 100% of the project.

The company optioned Moore from Denison Mines in 2016. Denison, listed on the TSX and NYSE, is Skyharbour’s largest strategic shareholder and its President Dave Cates is on Skyharbour’s board of directors.

Skyharbour also owns 100% interests in the Falcon Point, Yurchison and Mann Lake uranium projects on the east side of the Basin. The Falcon Point property hosts an NI 43-101 mineral resource of 7 million pounds U3O8 inferred at an average grade of 0.03% U3O8 and 5.3 million pounds thorium dioxide inferred at an average grade of 0.023%.

While Skyharbour is a uranium explorer, the company is also a prospect generator, meaning its strategy is to ink option agreements on its secondary properties, thus allowing other companies to come in and incur exploration expenditures in return for earning stakes on those properties.

The prospect generator component is key with such a big collection of properties as SYH, because without regular exploration, the claims could expire, leaving the company exposed to poachers. It also benefits the company and its shareholders with annual cash and stock payments from the companies optioning the properties mitigating equity-dilution risk going forward.

Skyharbour and partners are drilling their Athabasca Basin properties at the perfect time, considering a new bull market in uranium looks to be shaping up. On Nov. 5 the spot uranium price hit a two and a half-year high of $28.75 per pound, the highest it’s been since March 2016.

Price support is underpinned by a number of factors, including recent mine closures and production curtailments forcing major producers like Cameco to buy more uranium on the spot market to fulfill long-term contracts; China’s drive to build new nuclear plants as well as Japanese nuclear restarts; new funds and buyers of physical uranium entering the market like Yellow Cake and UTC; and the expectation of nuclear utilities’ uranium contracts expiring in the early 2020s, meaning they will need to start contracting again soon.

For more read our Why the uranium price must go up

Skyharbour Resources has an interesting strategy for advancing its Athabasca Basin uranium properties. It is a high-grade, discovery-driven company exploring its flagship Moore first and foremost. However, as a prospect generator, the company’s option agreements allow its partners to front the cash to conduct exploration on its other projects – which could become valuable assets in the company if resources are found and developed.

I’m awaiting results from the current exploration at Moore as I am eager to see what’s found in the basement rocks in this initial drill program testing the underlying feeder zones. This could be a significant catalyst going forward. The ball will continue to roll into next year, when Orano’s drilling program starts at Preston. Between the two, shareholders can look forward to months of news flow and potential stock catalysts. Meanwhile, the uranium price continues to rise, attracting interest and hopefully, investment capital to the hard-hit sector. 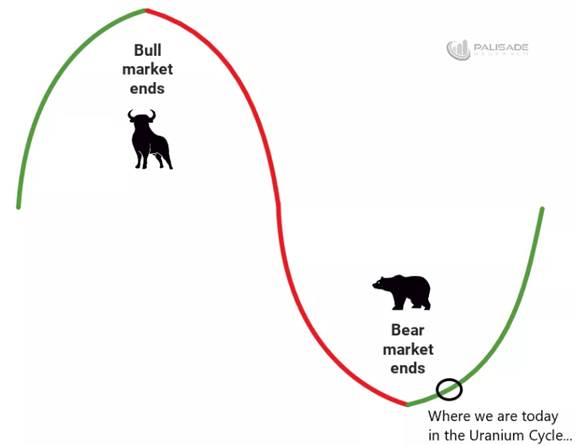 The best leverage to a rising uranium price is a uranium junior, which is why I have SYH and its current and future exploration programs on my radar.

Richard owns shares of Skyharbour Resources (TSX.V:SYH). SYH is an advertiser on his site aheadoftheherd.com