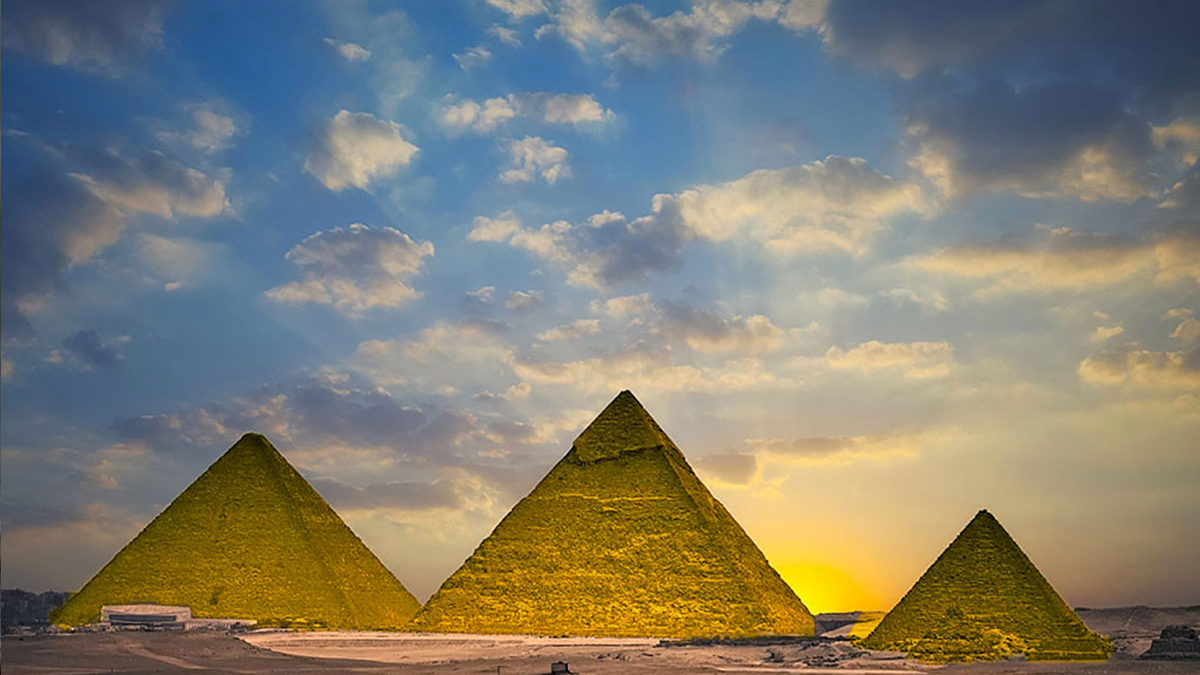 On May 6th 2020 Freegold Ventures (TSX:FVL) released results from hole #1 into a new zone on its Golden Summit property situated 18km NE of Fairbanks Alaska and just 5km from Kinross Gold’s Fort Knox deposit. The diamond drill hole labeled GSDL 2001 may be the most important drill hole in the 2020 global exploration search for the next world class gold deposit.

GSDL 2001 Reported 257 m of 2.94 grams per tonne gold including 188m of 3.69 grams per tonne gold, which included high grade sections of 2m of 169 grams gold with the last 20 meters grading 9.87 grams gold. Now this hole by itself is quite exceptional but it is in the context of the property and where the hole was drilled that has led to its blockbuster importance. Let’s look at the context of where this property is and zone are before we revisit the details of the hole.

The Golden Summit property overlies the creeks that boast the title of the most prolific placer gold district on the continent producing over 6 million ounces of gold from the creek beds. As such, Golden Summit has seen over a hundred years of exploration and production both from the creeks and bedrock mineral claims. Early prospecting discovered a half dozen quartz vein systems on the property and several developed some high-grade ounces. The most important was the Cleary vein which has a production history, producing 281,000 ounces at an average grade of 1.3 ounces per tonne gold. Yes, you read that right 1.3 ounces per tonne average. The Cleary mine was shut down during war time and never reopened.

Most of modern day exploration has been focused on the Dolphin stock, an intrusive deposit nearly identical to Kinross Gold’s Fort Knox deposit just 5 kilometers to the SE. 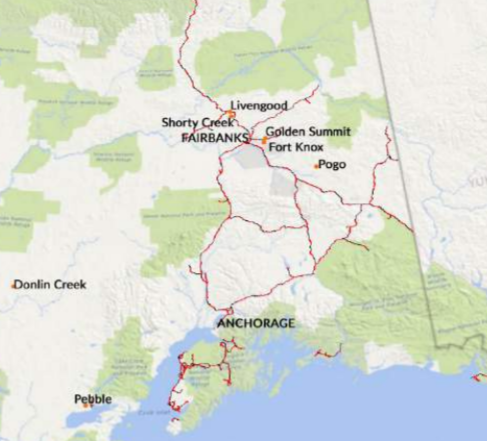 This is where my due diligence has really paid off to escalate the value of Hole 2001. Freegold Ventures made public a Preliminary Economic Assessment (PEA) on the Dolphin Stock January 2016. On just over 36,000 meters of drilling Freegold announced a resource of 2,947,000 ounces of gold – 1,363,000 ozs indicated and 1,584,000 ozs inferred gold within a conceptual pit.

The PEA also indicates that the first phase of production postulates a heap leach operation as did the Fort Knox comparative with estimated capital cost, CAPEX, of only $88 million that would last for 8 years. There are 528,000 ounces in the first phase of oxide production at an average grade of 0.63 grams gold. At current gold prices of US$1738.50 that is $35.21 per tonne as compared to the $14.90 it would cost to mine and leach it.

Now…Freegold is obligated to continue to quote this PEA until its updated which is nothing to sneeze at with 2.947 million ounces (1,363,000 ozs indicated and 1,584,000 ozs inferred gold) at the PEA stage. However, digging deeper into the historical reports, I found an earlier Resource Estimate published in August 2013 that was not pit constrained showing just how big the Dolphin stock is.

In the indicated category there are 79.8 million tonnes of 0.66 grams per tonnes gold and a whopping 248 million tonnes at 0.61 grams gold in the inferred category using the 0.30 gpt gold cut off. Global project resources are 1,683,000 indicated and 4,841,000 ozs of gold for a combined 6,524,000 ounces of gold. And the deposit is still open in several directions for additional growth. 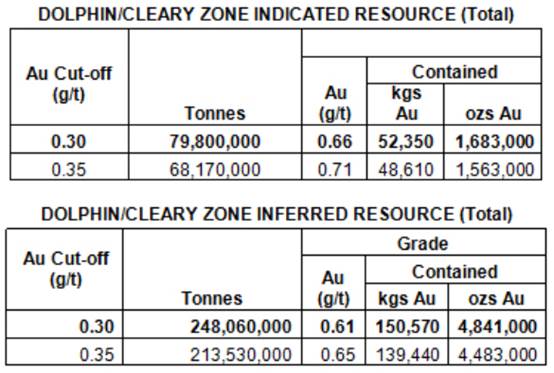 Alright, try to forget about those 6.5 million ounces now for a few minutes while we get back to the discovery. In an exclusive interview with Freegold’s VP of Exploration I was told that hole 2001 was collared virtually at the north end of the Dolphin stock conceptual pit outline and drilled north targeting what appeared to be a controlling structure for the higher-grade material in the stock.

The plan was to intersect the same structure as it left the stock and entered the surrounding country rock. And they hit, big time. Hole 2001 intersected 257m of 2.94 grams gold (true width of roughly 155 meters). That’s over 4 times the grade of the existing global resource (1,683,000 indicated and 4,841,000 inferred ozs) of 6.5 million ounces residing in the Dolphin stock right on the northern pit boundary. Amazingly the hole bottomed in 20m of 9.87 grams gold where drill rods were jamming so they terminated the hole.

The newly confirmed structure is believed to be dipping southerly at about 60deg which if proven with further drilling would have a true width of about 155 meters. Now intriguingly, the old Cleary mine vein 281,000 ounces at 1.3 ounces gold lies some 600 meters east and on trend of this structure. The final point on Hole 2001 is that it proved the gold continuity to over 500m depth so far. 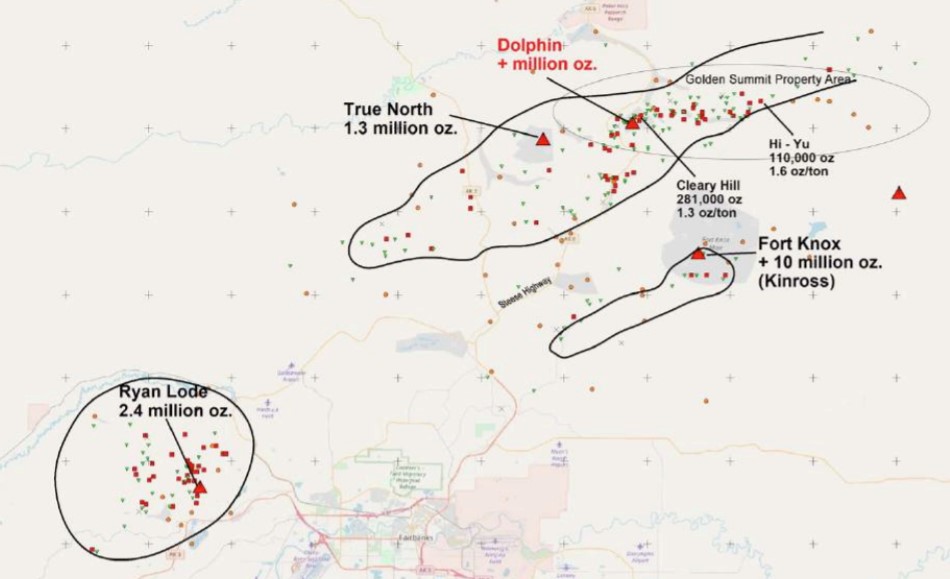 Hole GSDL 2002 a -70deg hole was started 150 meters east of GSDL 2001 towards the Cleary mine. It entered the target zone on que at 165m. The first 9m of the zone ran 2.4 grams gold. Then Covid-19 precautionary measures were enforced shutting the drill down but it’s ready to continue through the zone in Hole 2002 as soon as permitted.

In 35 years in the industry I have never seen such a perfect set up for value creation. As I started writing this article Freegold shares were trading at $0.35. It appears that I can’t write quick enough with the stock reaching a 0.53 close on Friday the 12th of June. Hopefully that will be the extent of the short term run while the project and most of the world are on hold waiting for relief from the Covid quarantine.

Hole GSDL 2002 could provide the confirmation that Freegold is on the brink of unlocking the incredible value of the Golden Summit property.

The Holes are 150m apart and its doubtful the zone ends right at each hole so conservatively estimate a 200m length. The estimated true width of the zone at a 60deg dip would be 155m, if it’s a 70deg dip then true width would be 115m. Since this is one of the biggest risk parameters I’ll discount that to the lower 115m width. Hole 1 demonstrated that the mineralization is still extremely robust at 500m depth. The specific gravity for the sulphide mineralization in the PEA is quoted as averaging 2.61.

A few comments on the share structure. Freegold is no spring chicken with 220,000,000 shares issued before the last financing announced May 13th as $5million at $0.30 with a half warrant. Eric Sprott, the most notable resource financier in the world, has disclosed his participation in each of the last three financings totalling over $7.0 million.

As near as can be determine Freegold will have 266,524,640 shares issued and 341 million fully diluted. It’s no wonder that 12 of the last 15 trading sessions the stock traded over 10 million shares and up to 40 million shares a day. Serious institutional players are accumulating massive positions in this new discovery. They must be seeing some of what I‘m sharing with you today.

Coming into a sizzling hot gold market, Freegold Ventures is leveraged to both ounces in the ground and a discovery like no other opportunity I have found. Hole 2 is obviously an important next step but I believe Hole 1 has already turned the key to unlocked the value of the Dolphin Stock resource and will add significantly to the historical 6.5 million ounce resource when all is said and done. This now ranks as the top new discovery in 2020 in my book.

The timing on next progress for drilling is now known. Freegold has indicated that drilling crews will mobilize about June 1st but the Alaska Covid protocols will require those personnel to quarantine for 2 weeks once they arrive. Drilling is estimated to start June 15th +/- and then things will happen very quickly. Hole 2002 is all we need to paint the big picture here and that hole is already at 165m depth. The hole will likely be finished within 1 week of start up and off to the lab before the labs get too jammed from other programs starting up.

All of the material I have referenced here is available in the news releases and technical reports available on the company’s website http://www.freegoldventures.com/

I am still building a position in Free Gold Ventures and have been acquiring shares from $0.24 to $0.57. I am not a paid consultant to the company or a paid letter writer. I am a career geologist that has worked in building public companies and wealth creation for shareholders for over 35 years. I currently do not sit on the Board of any publicly traded mining companies and invest in junior exploration companies for my own account.

I am obviously now biased because of my shareholdings so as I said before do your own due diligence, this is not a solicitation to buy stock.

Any AOTH/Richard Mills/Brad Aelicks document is not, and should not be, construed as an offer to sell or the solicitation of an offer to purchase or subscribe for any investment.

Brad Aelicks and Richard Mills own shares of Freegold Ventures (TSX:FVL). FVL is not a paid advertiser on aheadoftheherd.com