The drills have started turning at Surge Copper’s (TSX.V:SURG) Ootsa property in northwestern British Columbia, where the possibility exists for a major discovery hole in an area known for monster copper-gold porphyries.

On June 26 Surge announced the start of its 2018 exploration program with the construction of drill pads, with drilling starting the first week of July.

The company’s Ootsa property is an advanced stage copper-gold exploration project containing the East Seel, West Seel and Ox porphyry deposits. It is located adjacent to the Huckleberry open-pit copper mine previously operated by Imperial Metals. Surge Copper completed a PEA in 2016 showing the potential for a 12-year mine that would produce 324 million pounds of copper, 185,000 ounces of gold, 15.8 million pounds molybdenum and 3 million ounces of silver. A resource estimate done the same year shows 1.1 billion pounds of copper and over a million ounces of gold, in the measured and indicated categories.

According to the chart below, Ootsa’s Seel and Ox deposits have copper-equivalent grades that are better than most of BC’s current operating copper-gold mines. 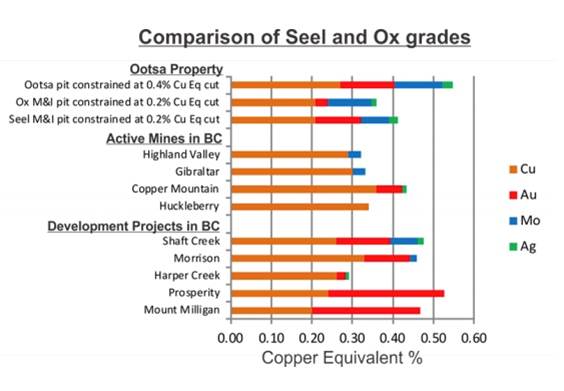 What is special about Surge Copper is that the company has at least three scenarios that could play out for it.

The proximity of Surge Copper to the currently-shuttered Huckleberry Mine means it is an ideal takeout target for Imperial Metals should Imperial need more mineralization to feed its aging mine, which is estimated to only have about five more years of minelife. However, Surge also has potentially, enough reserves for a stand-alone operation, which could either interest an investor wanting to partner with it if Surge Copper goes mining, or a major who buys the company outright. All three scenarios are good for SURG investors, who are bound to see a dramatic share price rise if any of these possibilities takes place.

While still an early-stage exploration play, Surge Copper expects a fully-developed mine would produce at between 15,000 and 20,000 tonnes per day, around the same size as the Huckleberry or Mount Polley mines, in terms of milling rates.

Surge Copper’s 2018 exploration plan involves exploring around the edges of the East and West Seel deposits. The goal is to add another 20 to 24 million tonnes to the current 224 million tonnes of M&I resource in the ground, which would enable Surge to comfortably run a stand-alone operation Ie. a mine that could function without any involvement from neighboring Huckleberry Mine.

Geologically, the 72,710-hectare property consists of three distinct styles of mineralization. The Ox deposit is an 83 million-year-old porphyritic intrusion into sedimentary and volcanic rock. Ox contains very similar mineralization to what has been mined next door at the Huckleberry Mine, which shut down in the summer of 2016 due to low copper prices. Imperial also runs the Red Chris and Mount Polley mines in British Columbia.

The other two deposits are East Seel and West Seel. Both are similarly aged porphyries – a geological term that refers to igneous rocks containing large-grained crystals such as feldspar or quartz dispersed in a fine-grained silicate matrix.

Porphyry-style mineralization by definition is large and bulk-mineable, with a series of sulfide-rich veinlets often running through the rock. The material is either bulk-mined underground or in an open pit, where the ore is crushed and run through a flotation cell, which turns it into a concentrate.

East Seel is considered to be the deposit with the highest grades, where 40 to 50- meter intersections of nearly 0.75% to 1% copper grades have been assayed. An important part of Surge Copper’s 2018 exploration goal is to better understand those high-grade trends and to extend some of them to depth.

Great time to be a copper explorer

SURG’s exploration program comes at the perfect time as far as the copper market is concerned.

Mine supply has failed to come to fruition due to regular labor disruptions at the world’s major copper mines like Grasberg in Indonesia and Escondida in Chile. Strikes and protests are estimated to have cost Grasberg, which produces around 3% of the world’s copper supply, a 5% decline in production in 2017. Only 20% of production from potential copper projects had come to market by 2016. 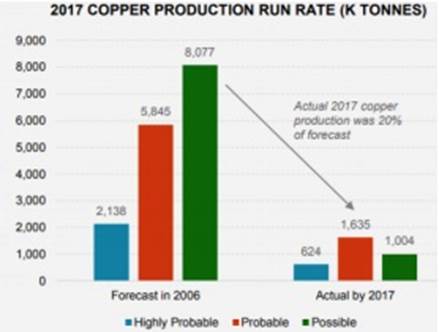 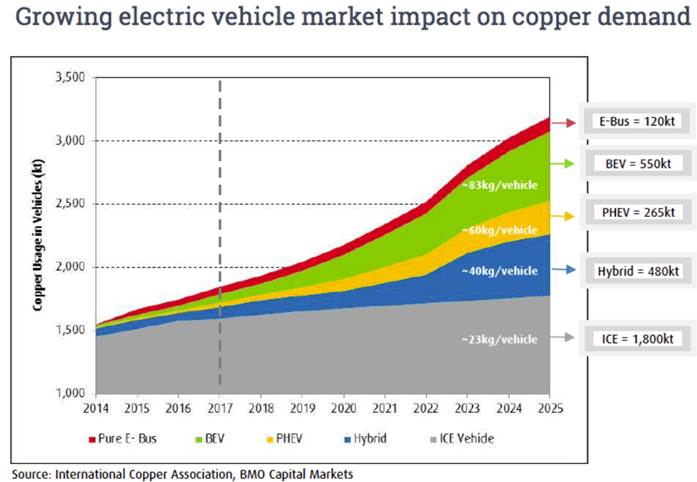 KPMG is predicting that by 2020 global copper demand will outstrip mine output and will pull even with refined copper production. The consultancy says in 2020 copper consumption will reach 24.5 million tonnes “driven by growth in global industrial production and higher investment in energy infrastructure.” An acceleration in demand for electric vehicles (copper for EVs is used in the electric motor, batteries, inverters, wiring and in charging stations) and renewable energy over the next two years are expected to be the main copper demand drivers. 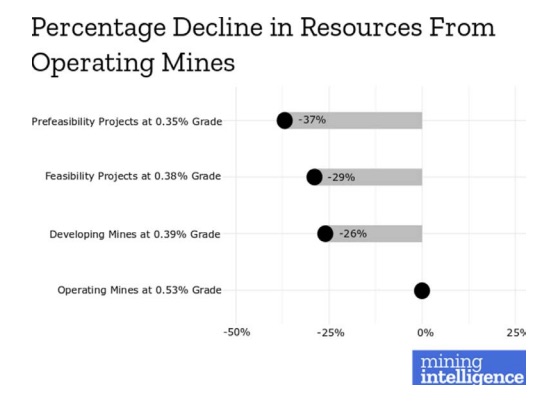 London-based commodities analyst CRU says unless new investments arise, existing mine production will drop from 20 million tonnes to below 12 million tonnes by 2034, leading to a supply shortfall of more than 15 million tonnes. (see chart below). That’s because over 200 copper mines are expected to run out of ore before 2035, with not enough new mines in the pipeline to take their place. 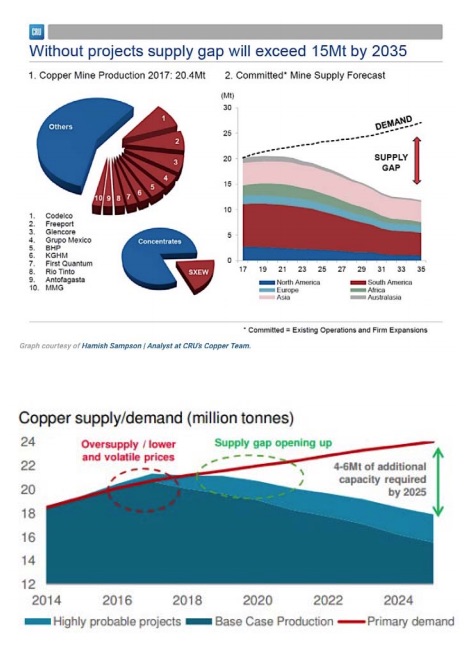 In order to improve the supply-demand imbalance and delay, or maybe even avoid, the coming copper crunch, there needs to be a lot of new copper exploration done. All the low-hanging copper fruit has been picked – either mined, refined or recycled – so where are new economic copper deposits to be found? Northwestern British Columbia is a good place to start. With excellent geology, a storied mining history, and a perfect storm of factors – new deposits, new infrastructure, declining snow cover, higher gold and copper prices, 2017 successes – this area of British Columbia is one of the safest bets for a copper play and in your authors opinion Ootsa is one of the better ones. In the plus column: high copper grades, a project advanced to the PEA stage, and exploration upside galore, with the opportunity to add many millions of tons to an already sizeable resource.

A couple more interesting points to make is that Ootsa ore is considered, by experts, to be amongst the best in the world. I’m not arguing that after stripping out the ‘Eqs’ it isn’t lower grade but the quality of the ore is such that Japan and South Korea think its perfect for their smelters. I think this opens up, after SURG finds the rest of the ore they need for a stand alone operation, a potential buyout by a mining major.

The other point to make is a new addition to SURG’s Board of Director’s.

May 29, 2018, Vancouver, British Columbia – Surge Copper Corp. (the “Company” or “Surge Copper”) (TSX-V:SURG), is pleased to announce that Mr. Randall Thompson, the former President of Huckleberry Mines Ltd., has joined the  Company’s Board of Directors.

Mr. Thompson has extensive mine operating and mine building expertise, including 10 years direct experience on mines and mine projects in British Columbia.   From 2012 to 2017 he was President and Chief Operating Officer at the Huckleberry Mine, located directly adjacent to Surge Copper’s Ootsa Project.  Mr. Thompson has supervised large development projects including the roughly $100 million expansion of the Huckleberry Mine and the $450 million construction of the Jabal Sayid mine in Saudi Arabia for Equinox Minerals.  More recently Mr. Thompson worked on optimizing operations for the Silvertip Mine in northern BC prior to the takeover of JDS Silver by Coeur Mining. Previous board experience includes directorship for Minto Explorations in the Yukon and the Mining Association of British Columbia.”

You have to admit that’s a pretty interesting board addition.

The furure for Surge Copper look bright indeed. While not endless the possibilities for SURG to advance their Ootsa project and benefit shareholders are numerous. That’s why I have SURG on my radar screen and own shares.